As one of the well-known cities in Canada, Québec City has preserved numerous historic architecture established in the early 17th century, specifically fortifications, gates and other defensive works. During the colonial periods, they served a critical role for military purpose; nowadays, they turn Québec City into the only walled city in north of Mexico. With its integrity of demonstration of European settlement, the Historic District of Old Québec has been listed by the United Nations Educational, Scientific and Cultural Organization (UNESCO) as World Heritage Site since 1985.

The fortifications leave a clear trail of the European colonization and also become one of the symbols of Old Québec. 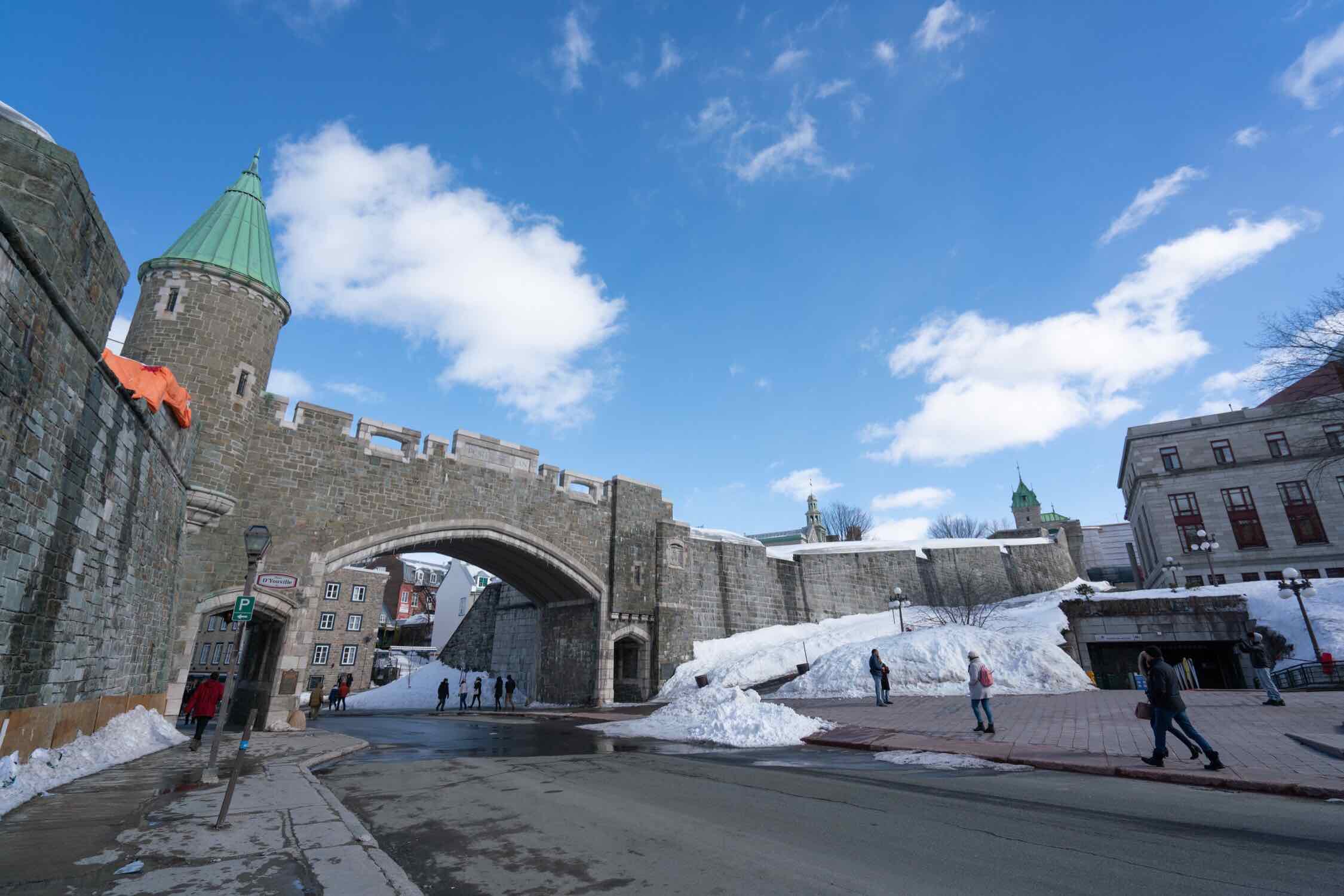 In addition to fortifications, Old Québec also maintains various historical sites, including churches, parks, etc., which illustrates a complete view of the lifestyle between the 17th and 19th century. 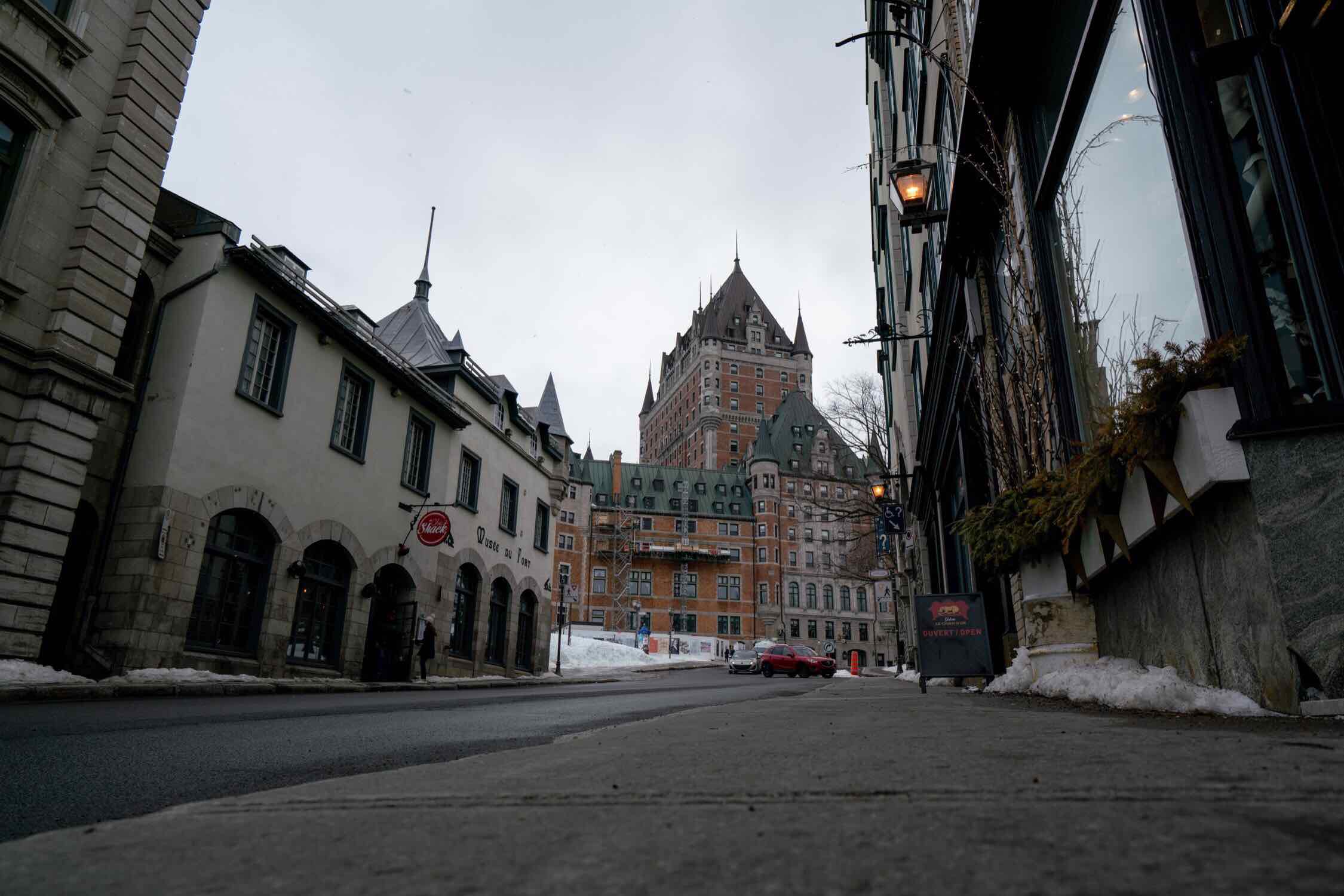 Fairmont Le Château Frontenac is an iconic Chateauesque-styled hotel built in 1893. It went through a few expansions and renovations to continuously provide services to the visitors to the city.
Link: Website
Location: Google Maps 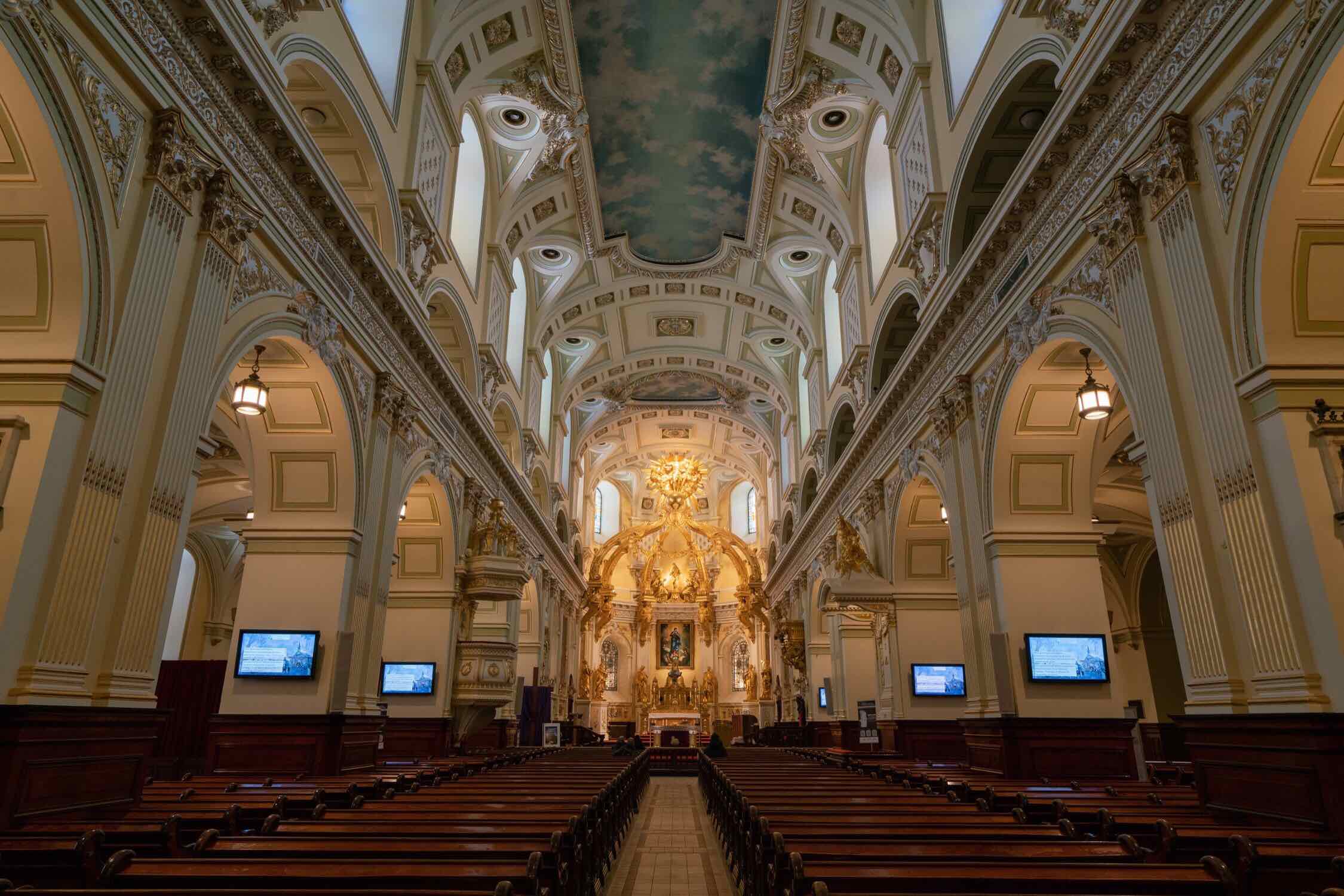 This church was initially built in 1647. Due to the bomb attack in 1759 and fire in 1922, the church was rebuilt twice using the original plan and also restored many times.
Link: Website
Location: Google Maps 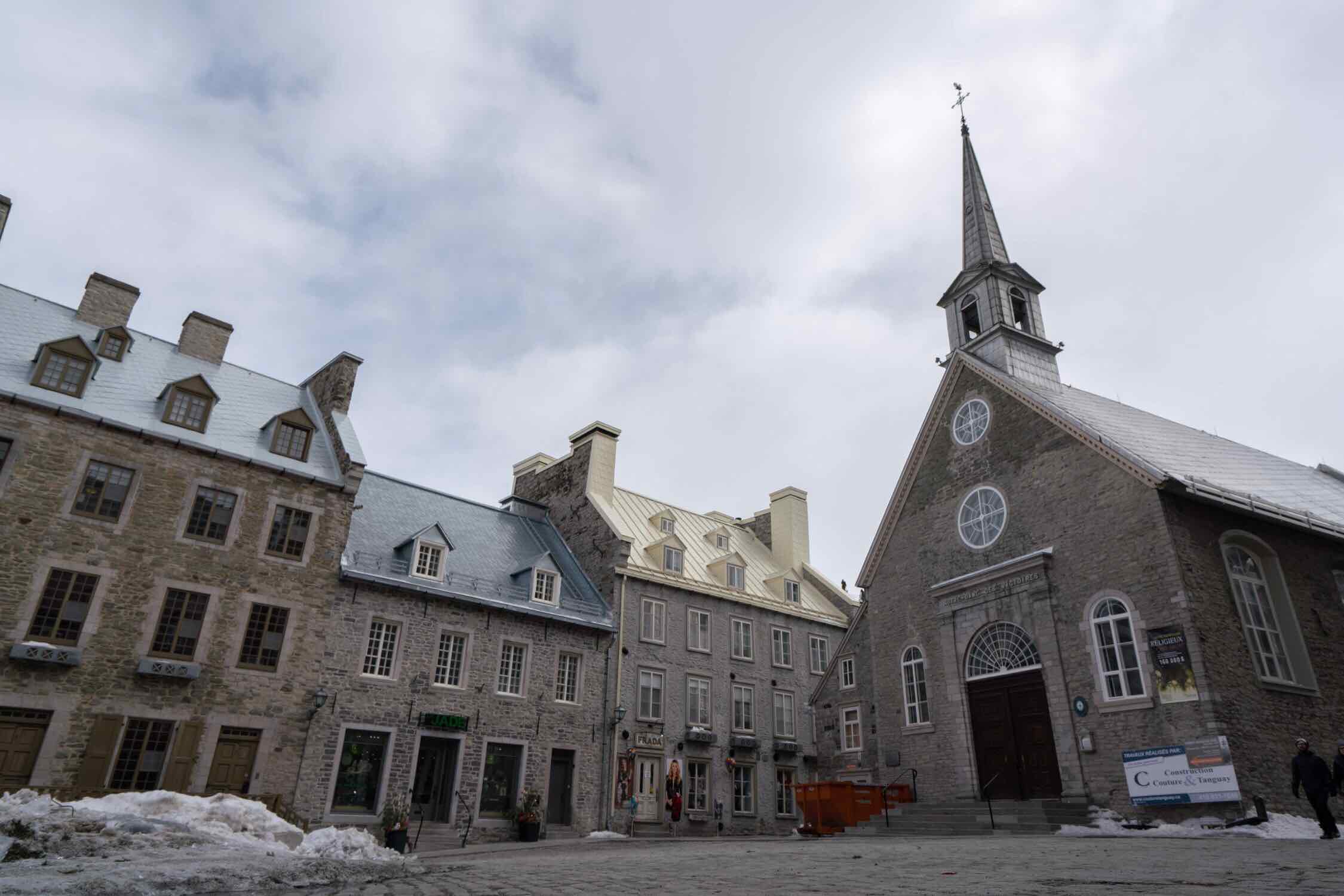 This church was built in 1723 and underwent a major restoration in 1816 due to the British bombardment in 1759.
It is located in Place Royale, an adorable small square which is also a filming location that stood in for France in Catch Me If You Can where Abagnale was arrested.
Link: Website
Location: Google Maps

Old Québec has also added diversity to the city image of history through various modern buildings, and Maison de la Littérature Library is a great example. It successfully transforms a former temple into a public library, providing a quiet and beautiful space to enjoy the world of literature. 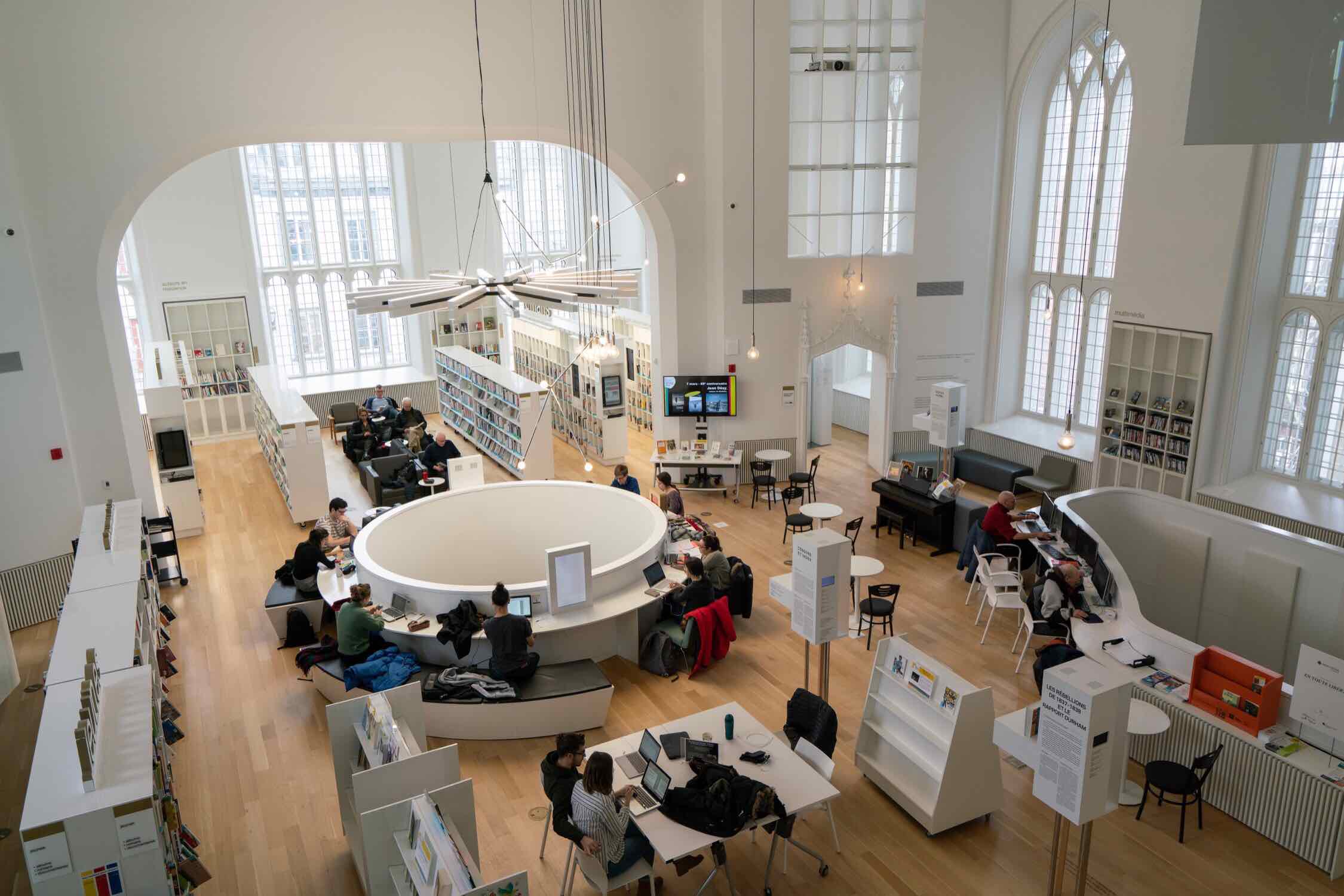 This small commercial area is named after Samuel de Champlain as a recognition of his achievement for the foundation of Quebec City in 1608. While the main street is not long, it does gather a good amount of stores such as clothing, home accessories, food and restaurants. Surrounded by the brick houses with adorable decorations, visitors might get an illusion of walking in an old town in Europe.
Toward the southern end of the main street, there is a huge mural which vividly depicts the working-class waterfront neighborhood. 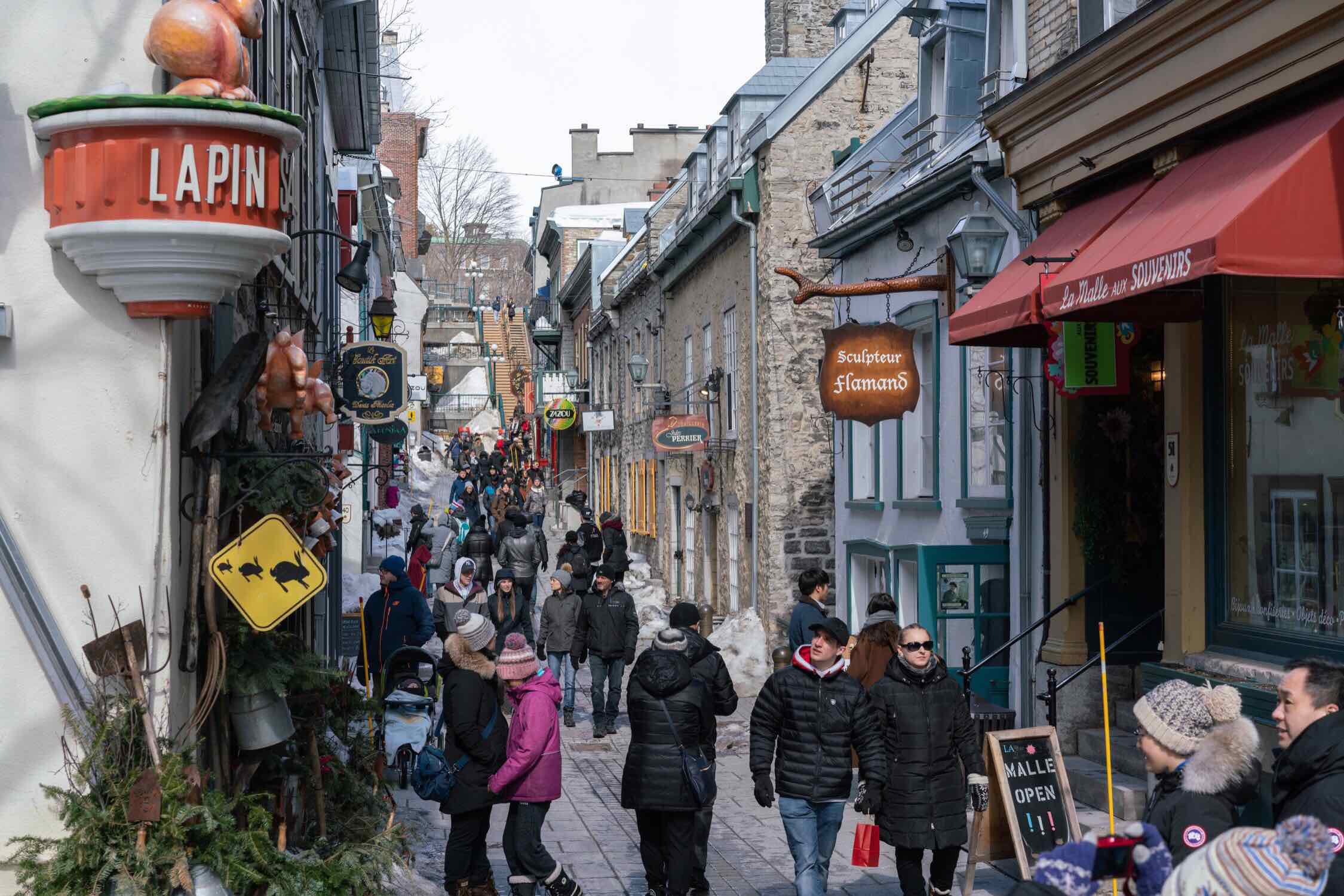 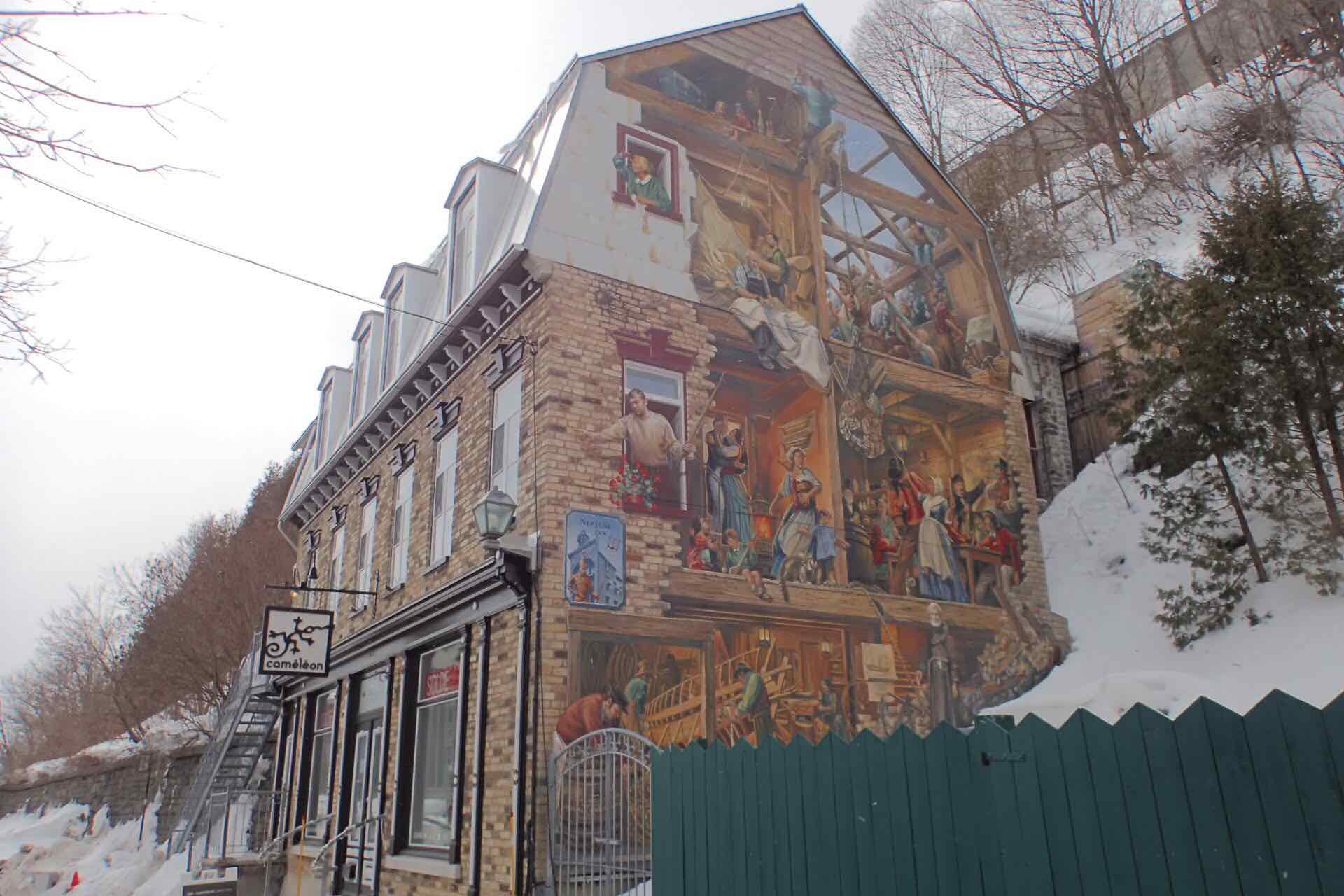 Besides the symbolic historical landmarks, the local streets are also an essential component that makes the town remarkable. Thanks to all the preservation efforts, visitors are able to fully experience the European atmosphere hundreds of years ago. 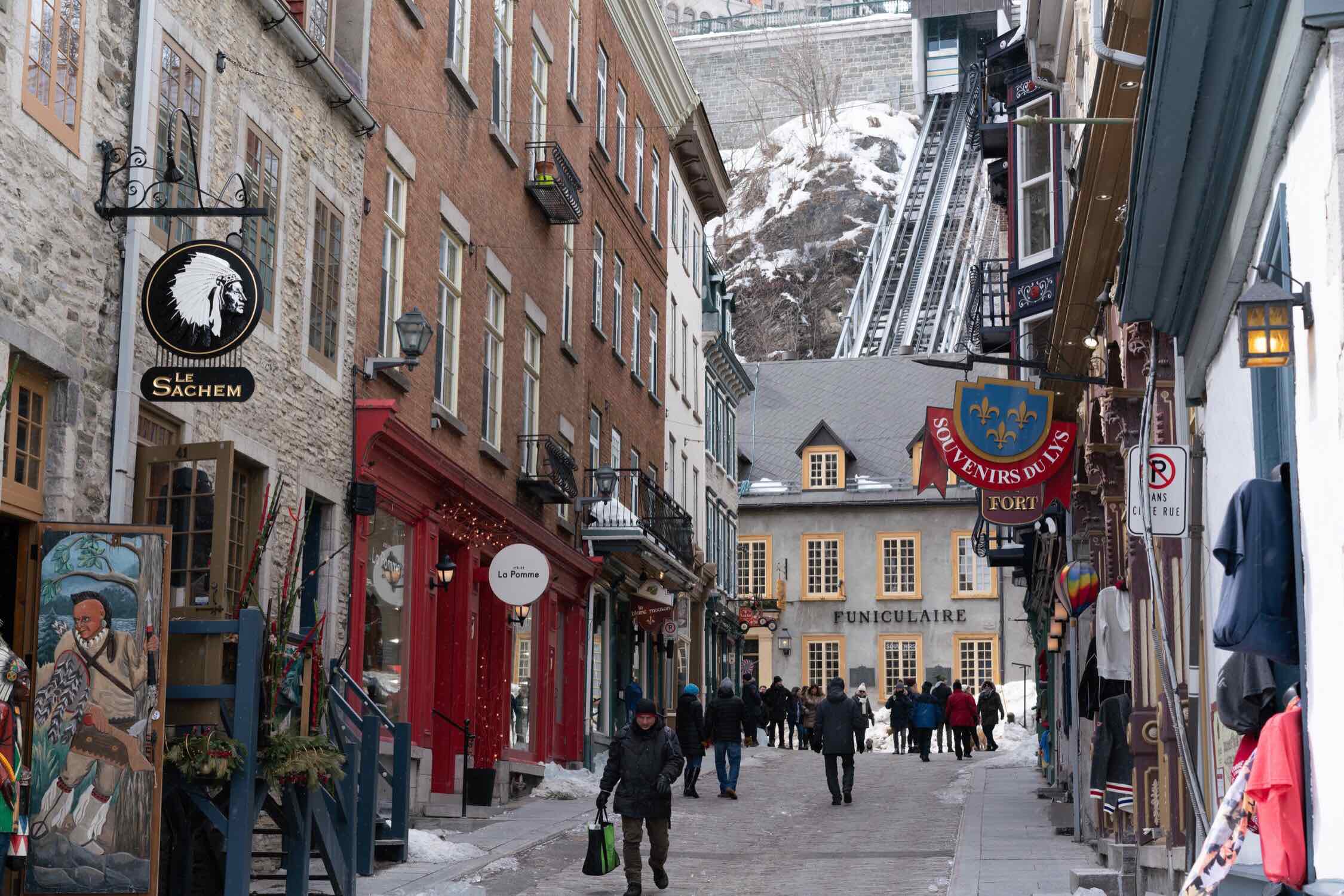 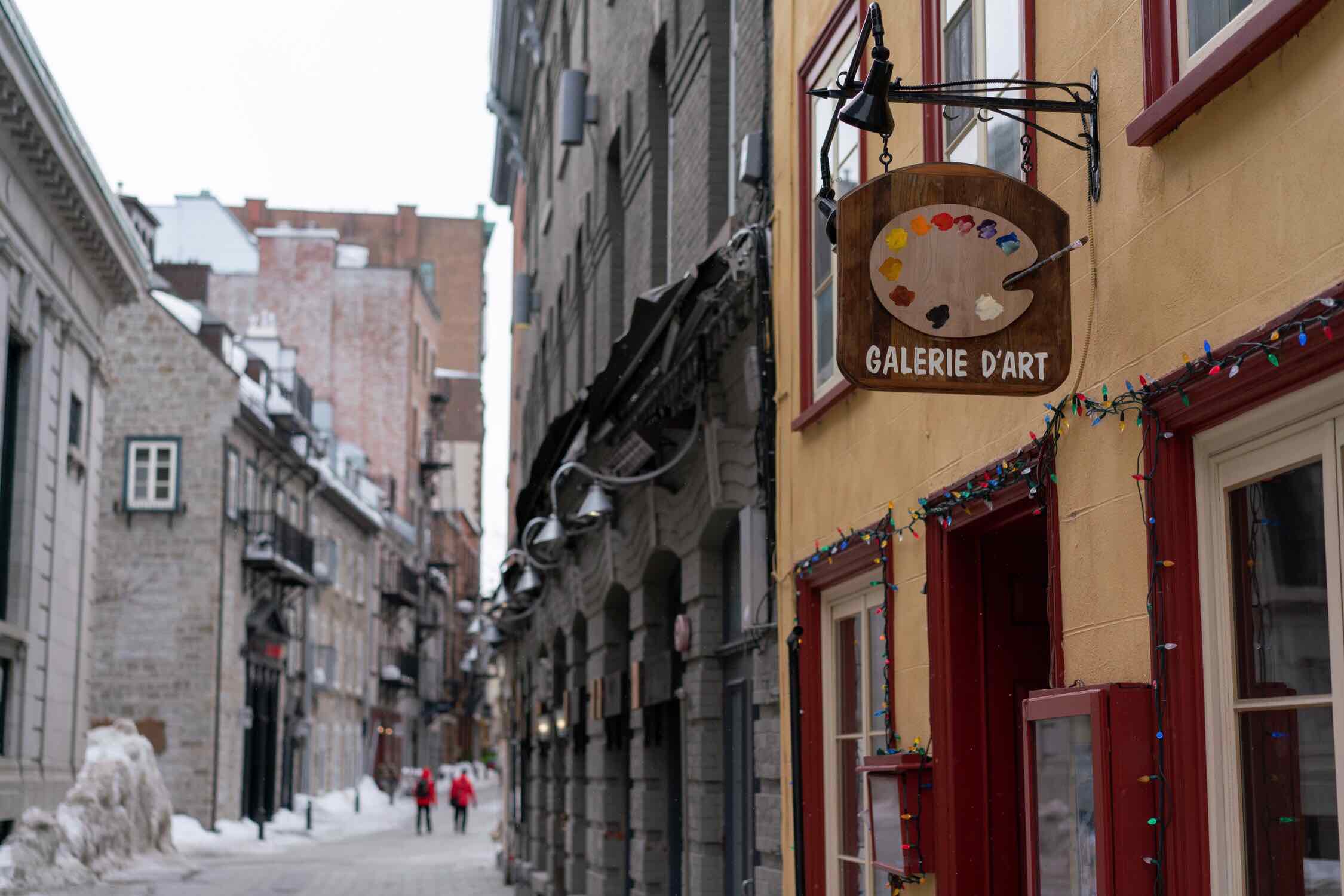 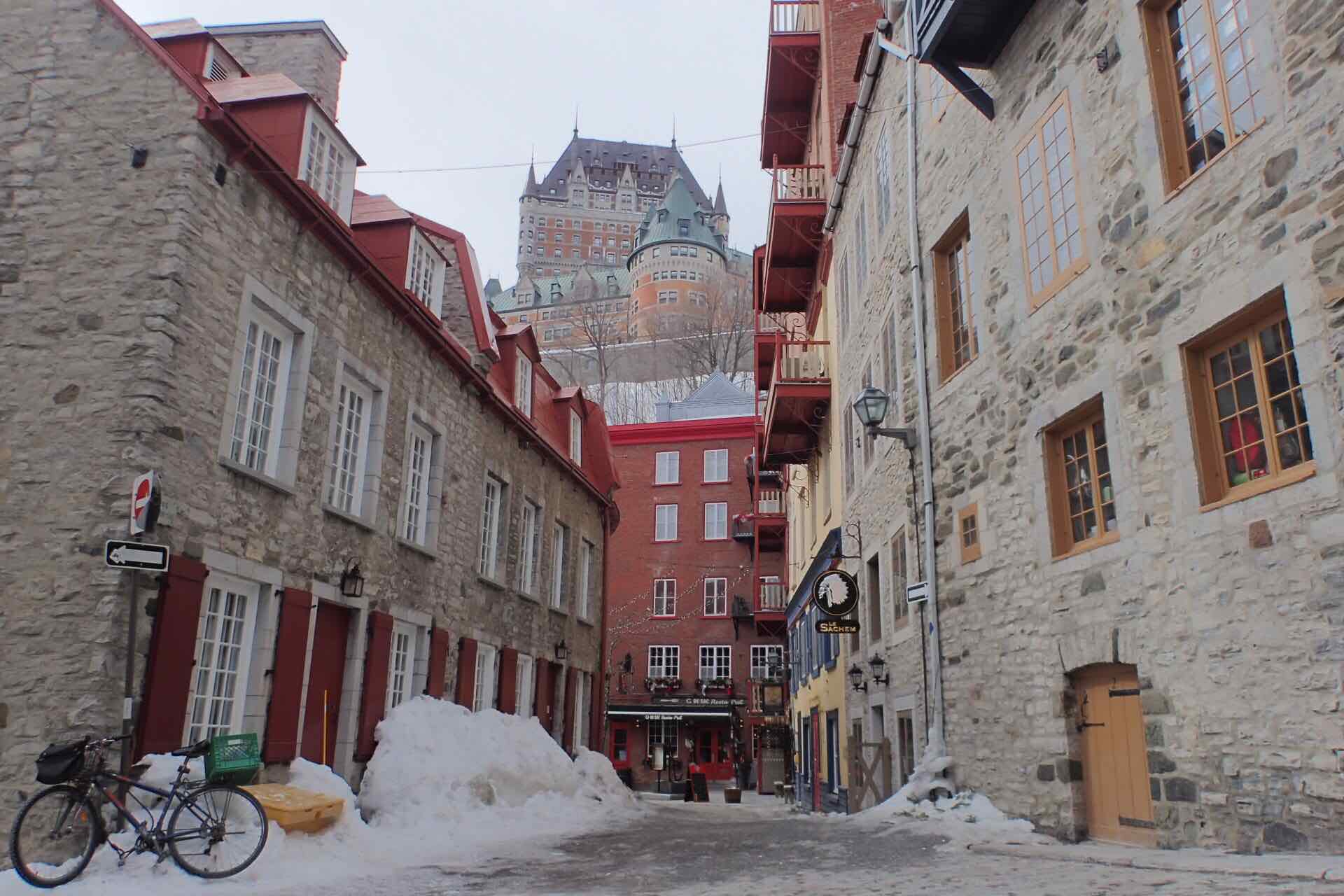 In addition to walking around the local streets in the Lower Town, visitors can either take the funicular (Funiculaire du Vieux-Québec, refer to Website for detailed information) or challenge the Breakneck Steps (location: Google Maps) to the Upper Town to get a closer look at the Fairmont Le Château Frontenac and bird’s eye view of St Lawrence River. 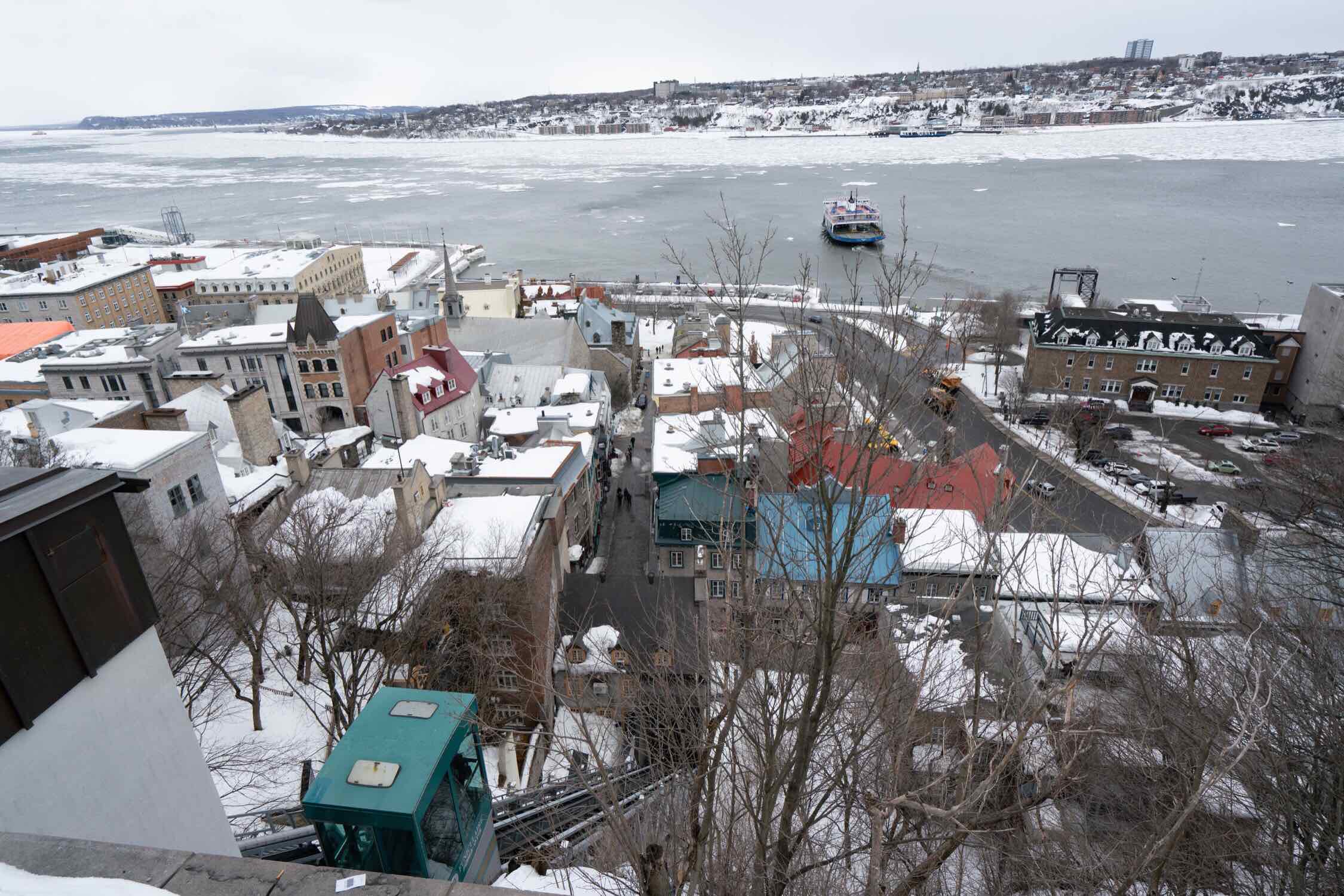 For those who are interested in night view, Terrasse du Chevalier-de-Lévis is a great location. The other way to enjoy the city view is to take Quebec City-Lévis ferry (Refer to Website for further details). 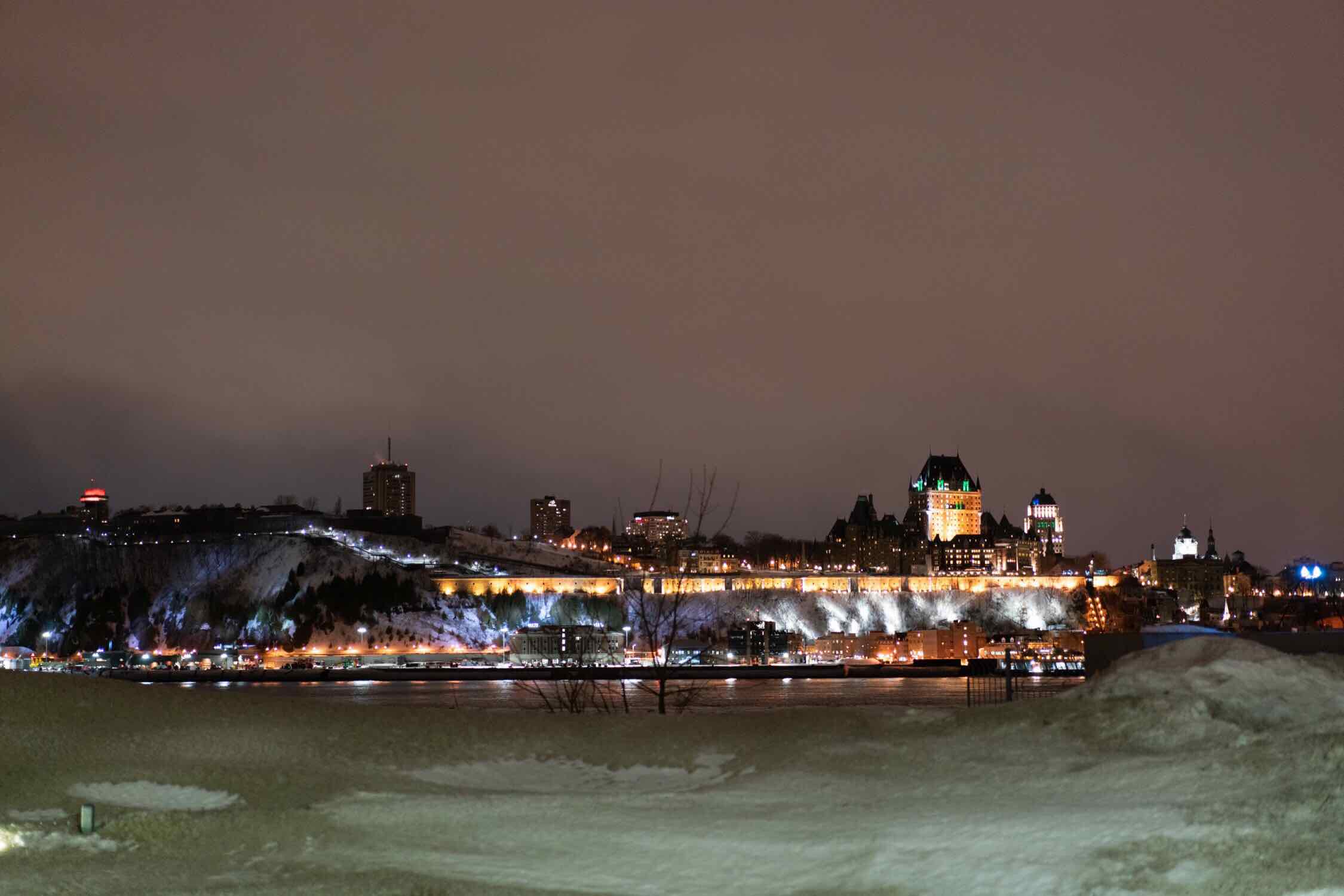 Although not as magnificent as the historical landmarks, certainly the antique street (Rue Saint-Paul, location: Google Maps), local galleries on Rue du Sault-au-Matelot (location: Google Maps) and frescos have added another color to the European atmosphere in Old Québec. 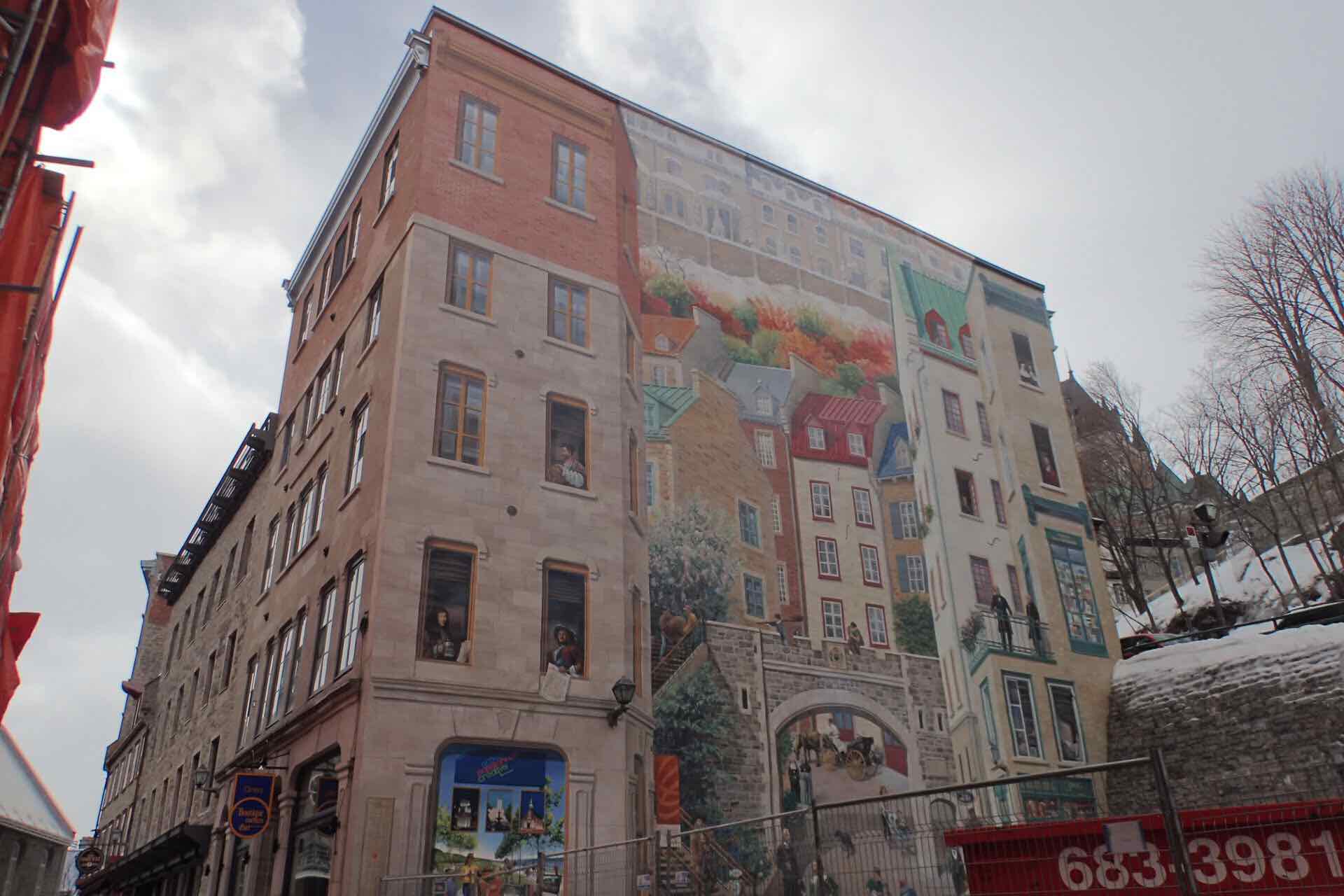 This mural is on a 5-story building, inaugurated in 1999. It presents some of Québec’s historic figures and masterly integrates the architectural elements in the city.
Location: Google Maps 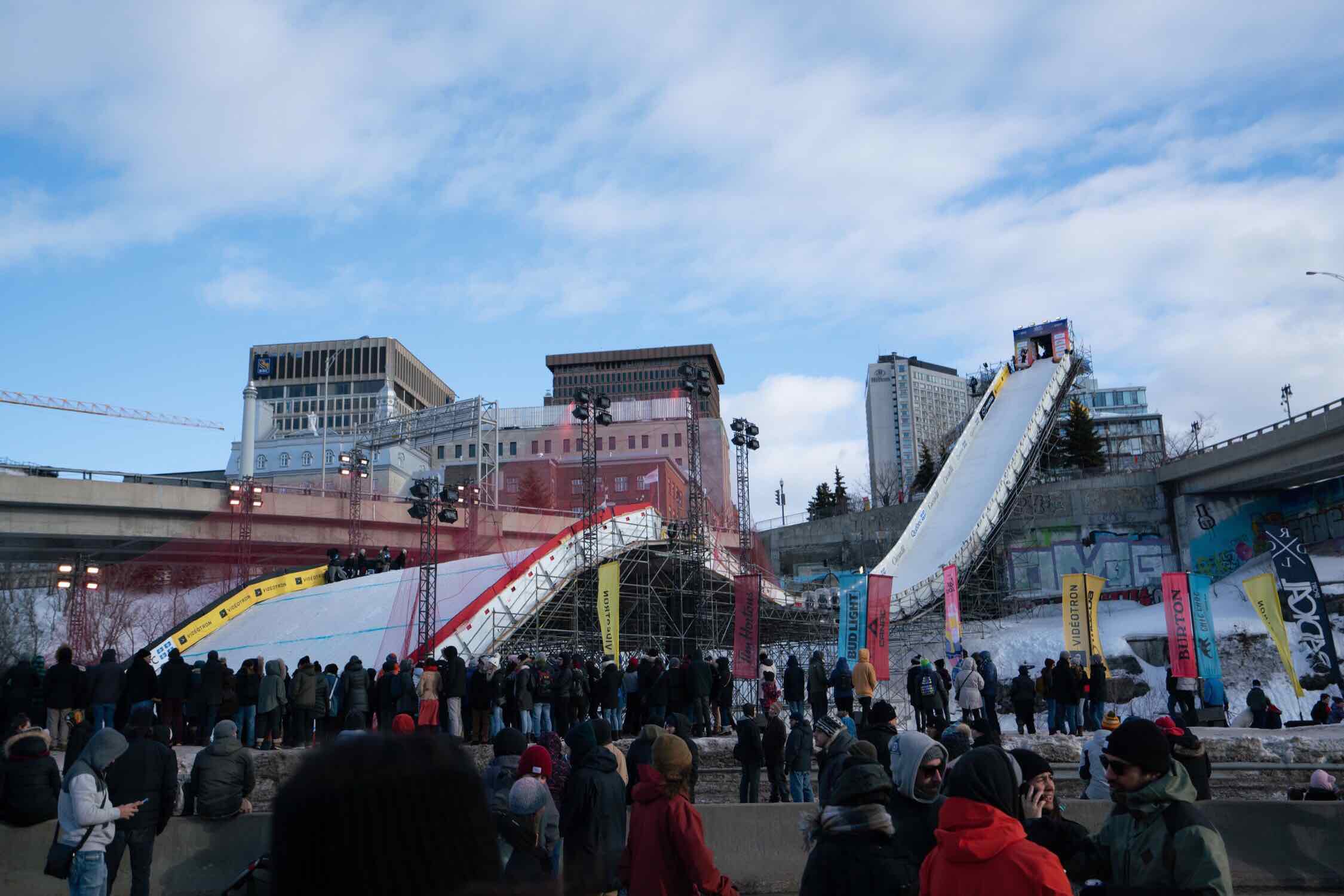 Every March, FIS Snowboard and Freestyle Ski World Cups (also known as Jamboree) are held in the city. The jumping slope is set up utilizing the vertical height difference from the viaducts. There are also music and food trucks as part of the festival and even bunny hill for some kids fun.
Location: Google Maps

Overall we had lots of fun during our stay. We came during the low season so inevitably a few places were closed, under renovation or simply still covered by snow. However, we got to experience the city in a very relaxing way without many tourists. No questions Old Québec is worth a visit.

Speaking of Canada, a few common things pop up in most people's mind are probably the beautiful maple leaf on the nation...
2019.03.14