After exploring the wildlife, we moved on to the beautiful landscape of desert. Our next destination was Namib-Naukluft National Park, which was famous for Namib desert.

Since the distance between Namib-Naukluft and Etosha National Parks were quite long, we split the drive into two days and spent one night at Long Beach, close to Walvis Bay facing to the Atlantic Ocean.

We left from Etosha National Park through Anderson’s Gate at the south of the Park around 1pm, and arrived at Outjo for a lunch break around 2:30pm. 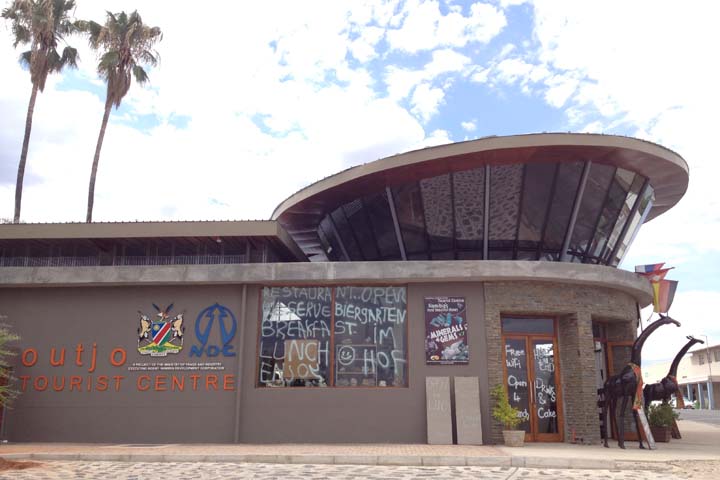 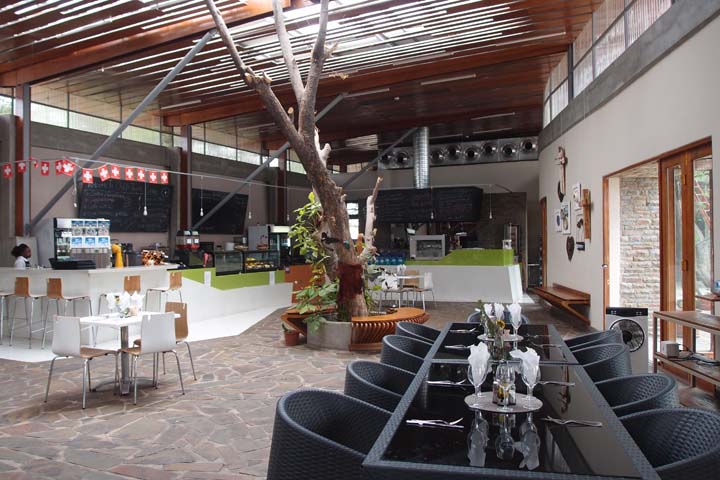 Inside of Information Center

There was a modern travel information center in Outjo, which served light food and drinks, and also exhibited local arts for sale. Free Wifi was available and the password could be obtained at the counter. We also saw two traditional houses outside and a group of aboriginal people.

After lunch, we got back on highway B1 heading south to Okahandja and then connected to B2. The weather was very hot, with the temperature exceeding 30℃, even 35℃ in the early afternoon, until sunset. Around 6:30pm we arrived at a small town called Karibib to refill gas and withdraw some cash from an ATM at the gas station.

* Make sure you always have enough gasoline in the tank of your car! In Namibia, Distances between the cities and towns were often quite long. Some towns do not even have any gas station. It is better to refill your gas whenever you see a gas station. We refilled our gas tank whenever the tank got half empty. 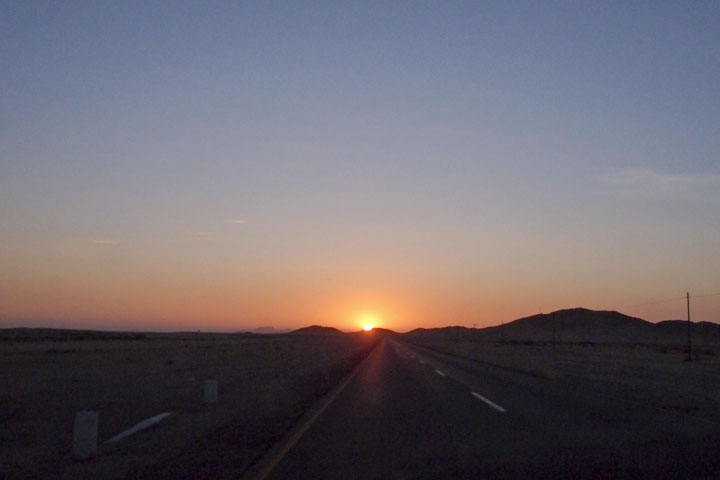 Sunset during the drive 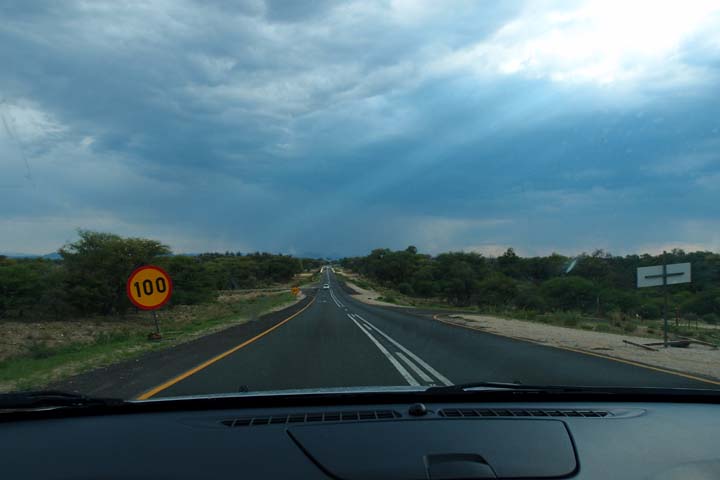 View from car on B road

The sky turned completely dark by 8pm. Following the instructions on Google Maps, around 9pm we got to a residential area full of vacation houses. However, our hotel for the night, Protea Hotel Swakopmund Burning Shore, was not at the location reflected on the Google map.

*We checked the location on google on 12/7/2017, and Google showed the correct location. See the information section below for the detail location.

Unfortunately, the residential area was dark and there were no people we could ask for the hotel location. We went back to the way we came from and found a gas station and another Protea Hotel in Walvis Bay. Thanks to the people at the gas station and hotel, we figured out the location of our hotel for the night.

The route from Walvis Bay to our hotel was completely dark without any street lights so we had to just rely on the car lights. Far away we saw some lights along the shore but nothing else visible.

After 20-minute drive, we finally got to our hotel right before they closed the door at 10pm. The staff helped us check in quickly so we could take rest. Since our arrival time was too late and the restaurant at the hotel was already closed, we asked for a kettle and utensils to make instant noodle in our room before we went to bed.

At 8am, we headed to the hotel restaurant and then realized we were the only guests last night. Thus the hotel provided menu to take our orders in stead of serving buffet as they normally did. We took a corner table with the beach view and enjoyed various types of food, very satisfying.

It was cloudy and only 17℃, but there were still people walking on the beach and jogging in the neighborhood. The houses in this areas seemed newly built and the atmosphere made us feel like in a beach in some western countries rather in Africa. We spent some time relaxing at beach-front hotel by taking a walk and enjoying the beach view.

Around 12pm we finally left from the hotel and drove back to B2 highway. When we got close to B2, an astonishing view was right in front of us! As mentioned, one side of the neighborhood of our hotel was beach and the Atlantic Ocean, while the other side was nothing but deserts. We did not realize the desert the night before due to the complete darkness without any street lights. 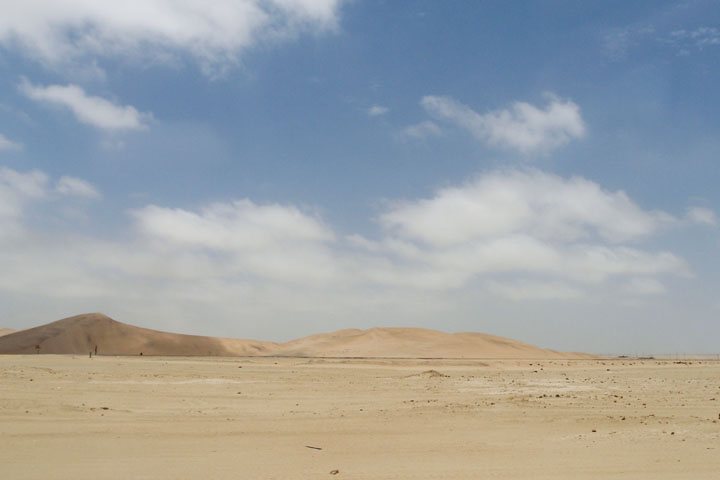 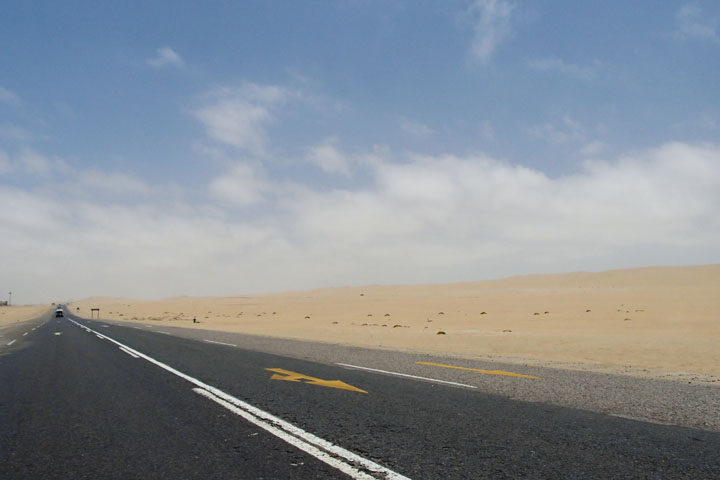 The majority of the route to Sesrium was C, which was flattened but not paved, so driving was not as easy as the previous day from Etosha. (Refer to the post Way to Etosha National Park for road rating). Even though the road was flattened, it was occasionally bumpy for a non-4WD car. Due to the mixture of sands and small stones, the whole road got dusty and small stones frequently hit the front window whenever another car drove by. Insurance for tires and windows is definitely required when driving on roads other than B in Namibia.

Around 3:30pm, we arrived at Solitaire and stopped at a gas station in the small town because the tank was slightly below half at the time. However, the gas station seemed close and a guy in the town told us that the gas station was closed as it ran out of gas. While we got a bit worried about the gas, the guy told us that half tank of gas would be sufficient to get to Sesriem, the town of entrance to Namib-Naukluft National Park. We were also informed that there was a gas station in Sesriem. 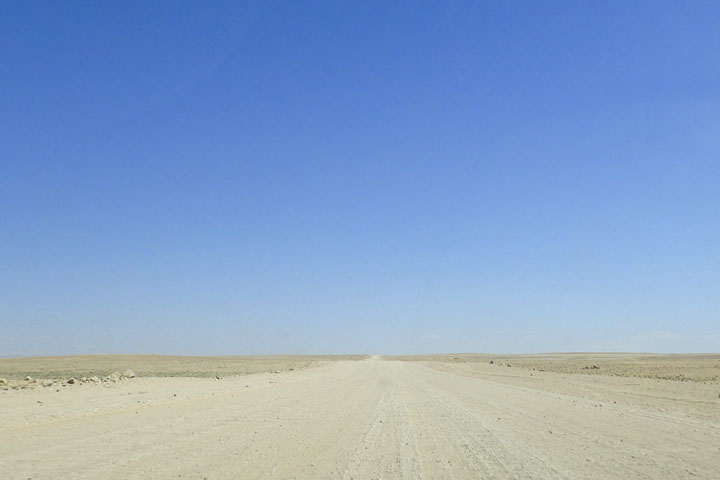 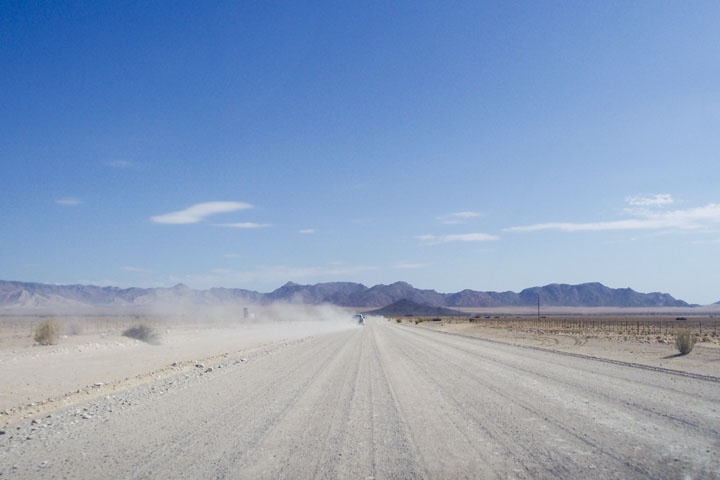 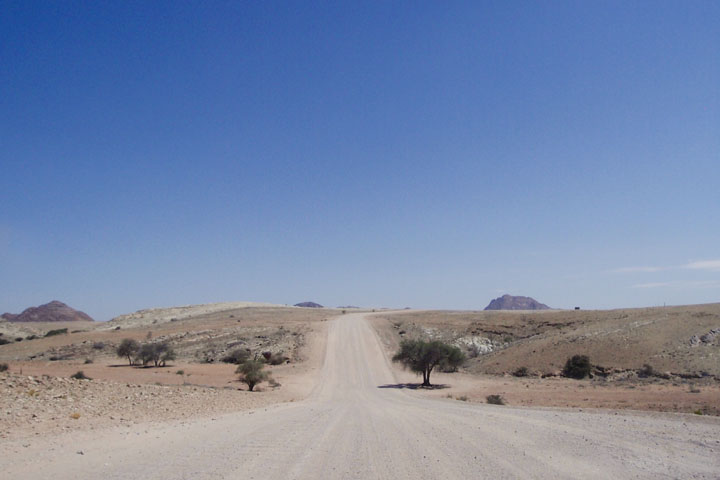 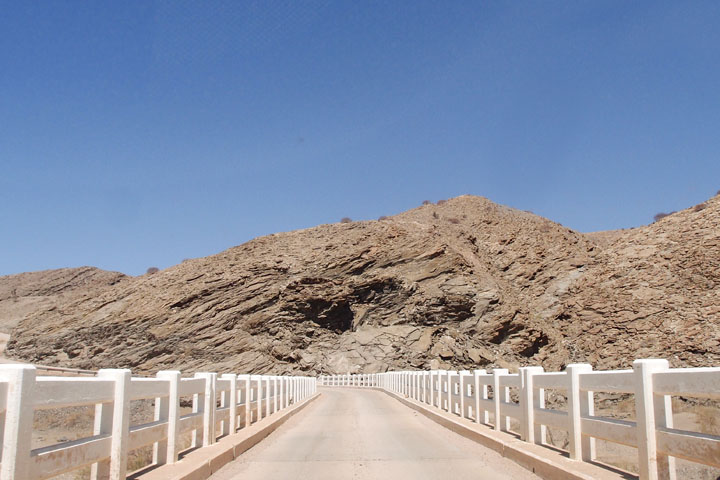 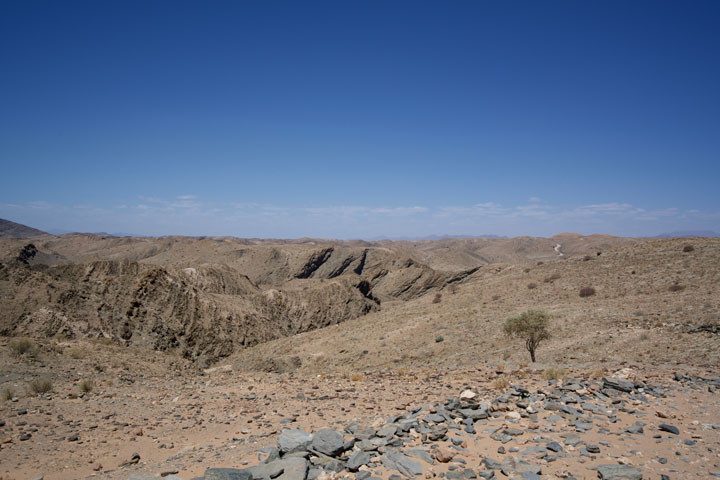 After leaving Solitaire, we kept driving on C14 and moved on to C19 for a while. For the last 30 min to Namib-Naukluft National Park, we drove on D826. This D road was completely out of maintenance. We were able to identify the range of drive route from the rest of the desert area but the road was full of bumps and holes. To avoid a flat tire, we drove at 25km/h. For our next trip in Namibia, we will definitely rent 4WD truck rather a normal sedan.

By 5:30pm, we finally arrived at Sesriem. We first refilled the gas at the Eugen gas station, which was right outside of Namib-Naukluft National Park, and bought some groceries from the convenience store in the gas station. Then we went to the reception to pay the park fee and camping fee. 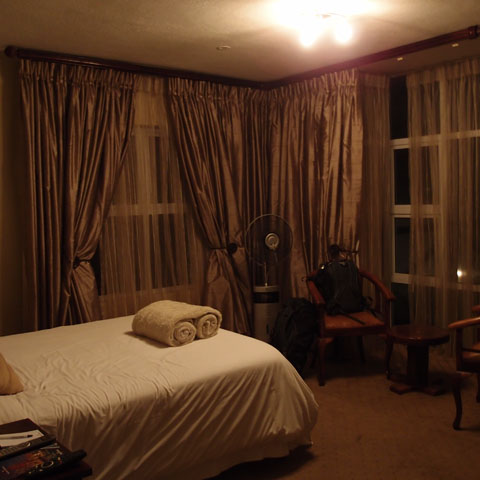 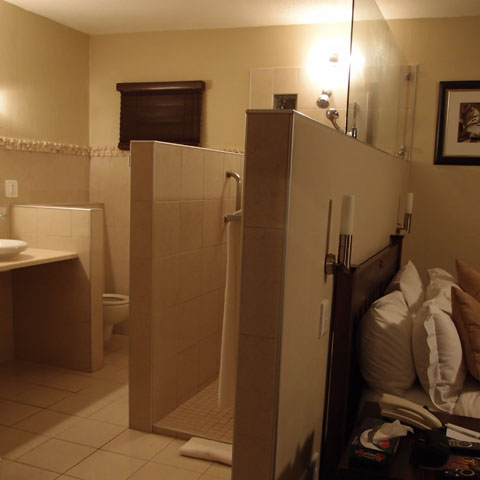 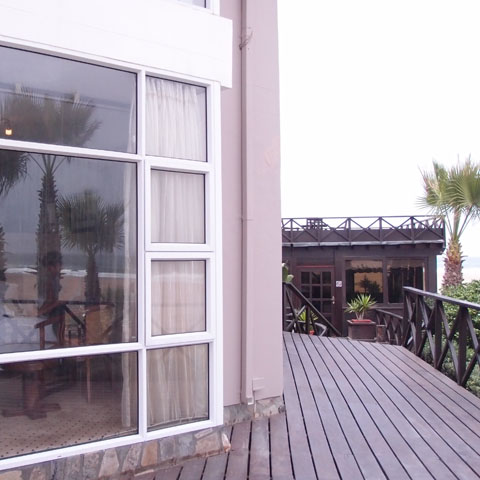 Terrace in front of our room 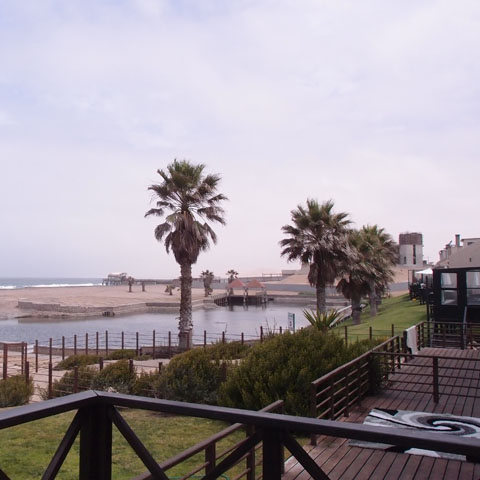 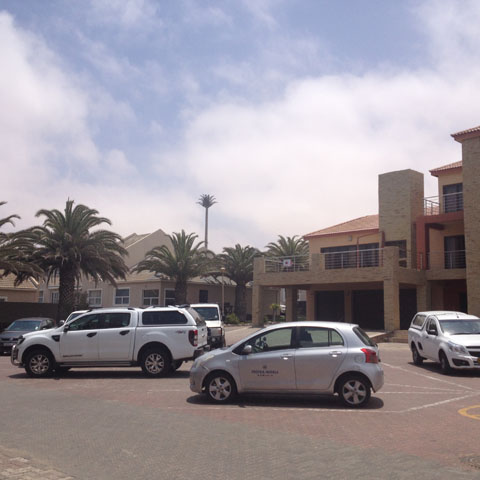 Parking in front of hotel

Meal: Breakfast was included for gold and platinum members.

The layout of the hotel was much like a large summer house on the beach. Our room was on the first floor with big windows, and one of them faced to the ocean. A back door connected to the back side of the building and led to the beach directly.

The bathroom was very interesting as the wall was only about 60% height of the ceiling and the top part was connected with bedroom. Also there was no door separating the bathroom from bedroom.

Overall the stay was comfy and relaxing, and the service was nice. 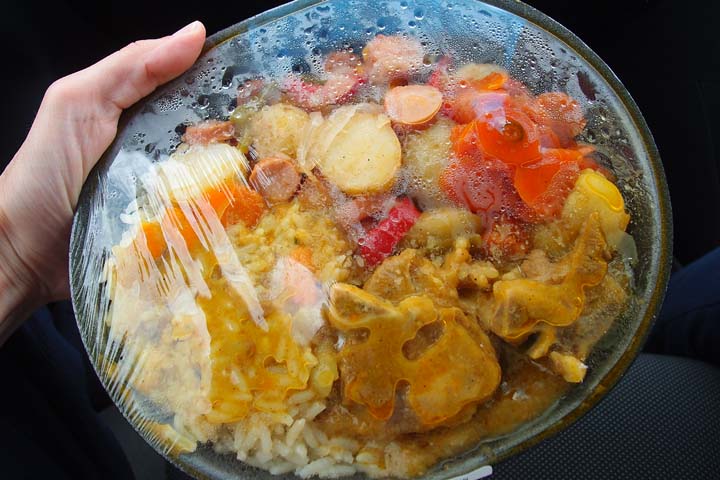 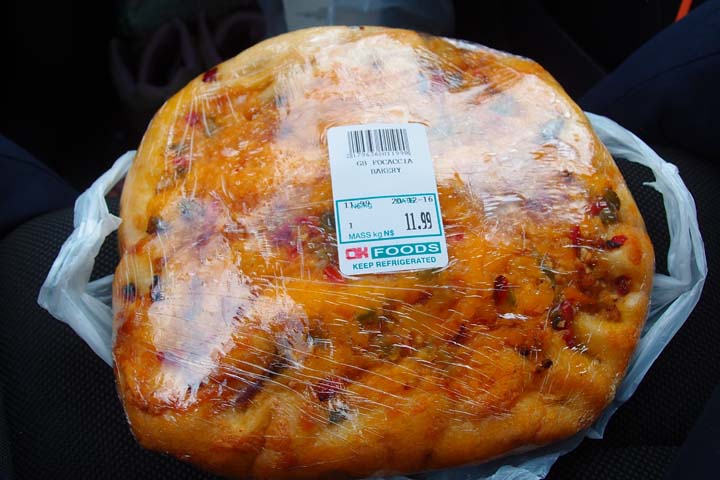 A kitchen serving light food and drinks was located in the travel information center. A supermarket, OK Foods, across the street also had a hot food station. We bought a mix plate of the lamb curry and sweet carrots, pastry and a gallon of water for 99.15 NAD. The food from the supermarket were really tasty. 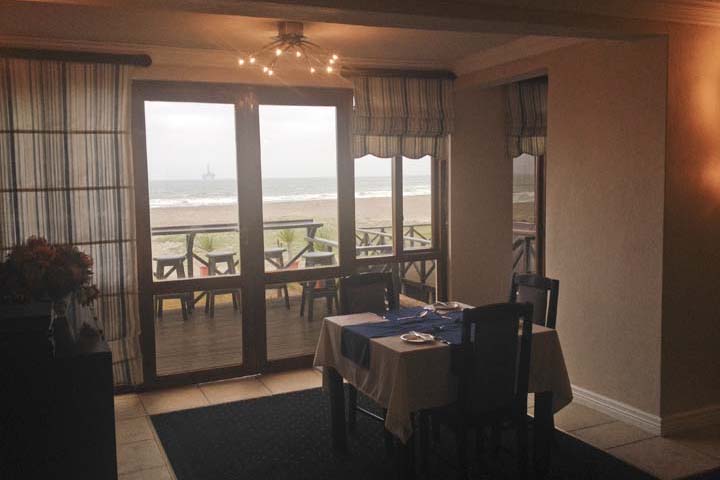 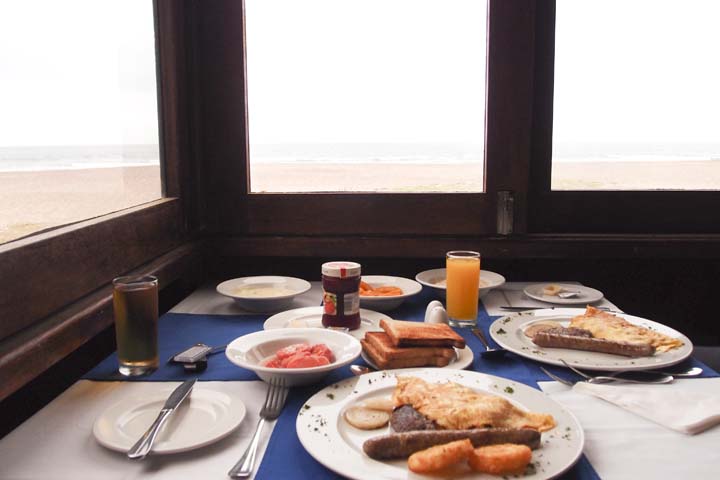 The restaurant provided breakfast, lunch and dinner. There was also a bar within.

The breakfast usually served as buffet. However, as we were the only guests when we stayed at the hotel, it was served by order per menu provided. The food was good in general.

Our adventure in Madagascar started from Antananarivo, the capital and largest city of Madagascar. People often called t...
2016.12.23