There are the three greatest water falls in the world: Niagara, Iguazu, and Victoria. We had visited Niagara previously and enjoyed the magnificence of the water falls. Since we decided to come to African continent, naturally we picked another water falls from the greatest in the world as one of our destination. 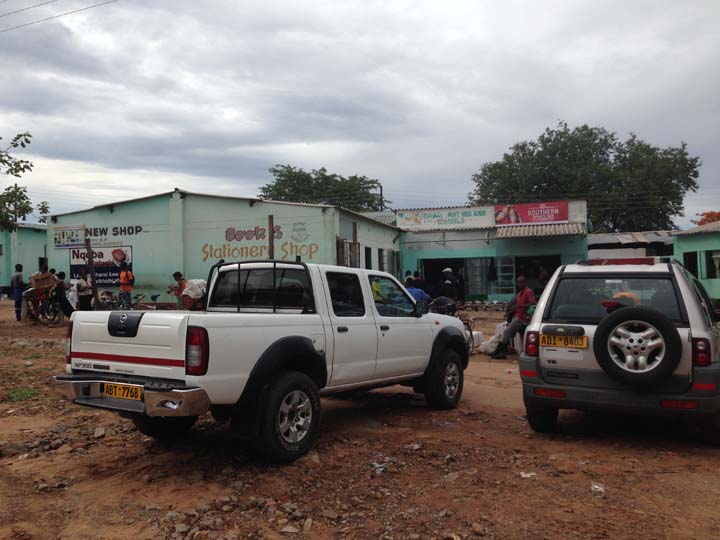 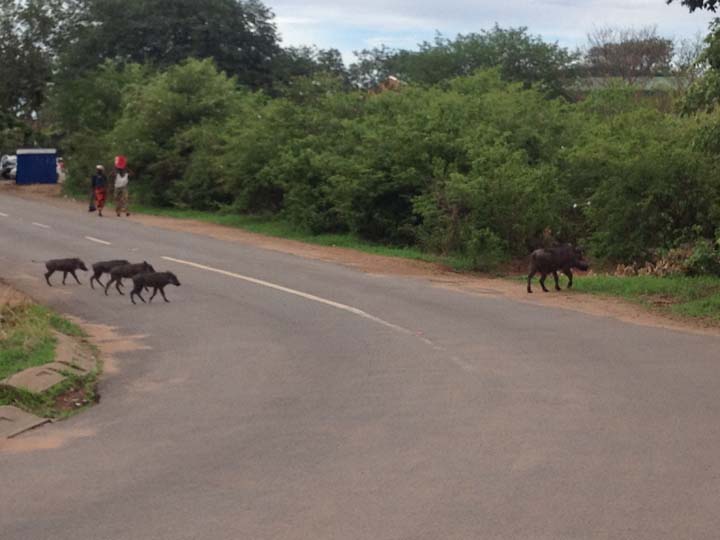 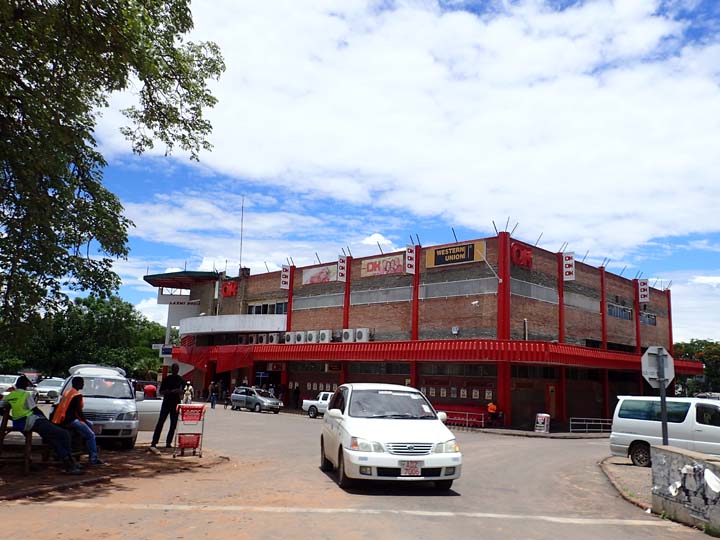 We left our luggage in the room and walked around in the town. The town was not clean or well organized in our eyes, and there were wild monkeys and pigs walking on the streets in the town. However, we could sense that this town made much money from the tourists. Most of the main routes were paved roads and everything needed by tourists were available, such as ATMs (banks as well), supermarkets, restaurants and a gas station. Also, security guards were everywhere in the town. Near the supermarkets, there were some local people selling the old Zimbabwe bills used during the hyper inflation a couple of years ago. If you do not intend to interact with them, you should not talk with them because they would be very aggressive to sell those bills to the travelers once you talk with them. Since there was nothing interesting to us in the town, we went back to the hostel to search information about the Victoria Falls National Park and transportation to Chobe National Park in Botswana, our next destination, after we bought some cooked food from a supermarket for dinner and breakfast for the following day.

We decided to visit the Victoria Falls from early morning as we planned to move to Chobe National Park in Botswana later in the day. We woke up around 5am to pack and check out from the Shoestrings Backpackers. The hostel offered to keep our luggage in the storage with a lock. Then around 6am we took a local taxi reserved through the hostel to go to Victoria Falls National Park. We originally planned to take a walk since it was only about 2km from the hostel to the national park. However, the receptionist of the hostel told us that there were wild animals on the way to the park and even a few local people got attacked and killed by the animals. Therefore, we asked the receptionist to reserve a taxi to the park without further question. The driver was a nice and chatty a lady, telling us that she took care of the homeless kids in the village and also drove the taxi for living. 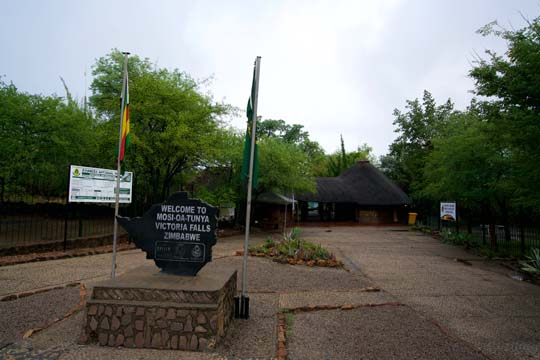 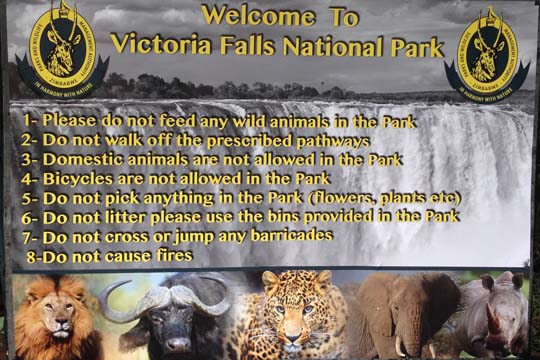 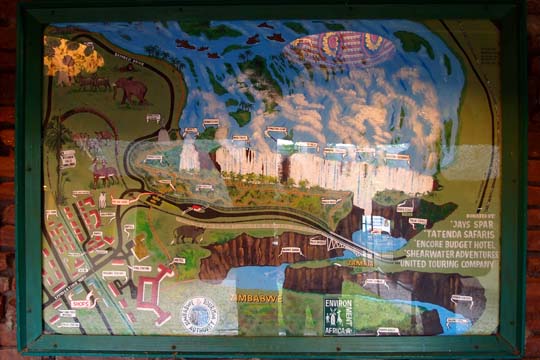 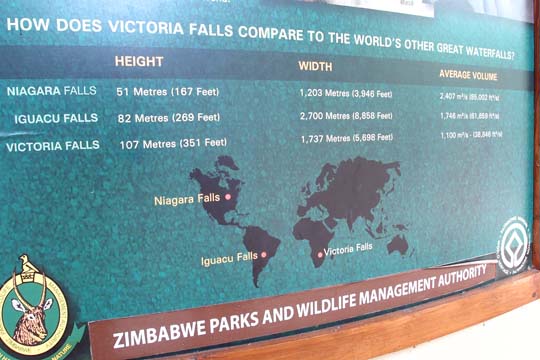 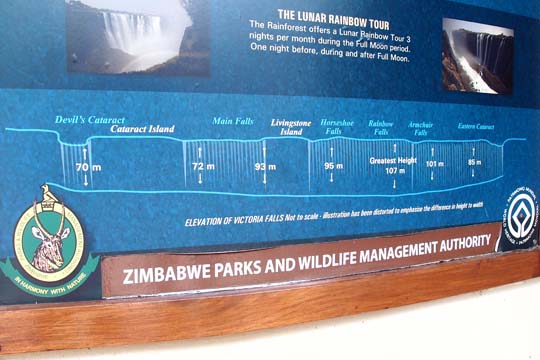 In 10 minutes we arrived at the National Park. Across the park entrance, there were some parking lots and a few gift shops which were not yet opened. The driver offered us the pickup to go back to the town. Since it was still early, we were the first and only visitors when we arrived. Within the visitor center, there were some boards demonstrating information about the nature, geography and wildlife in the Park. They also showed the comparison with the other two greatest water falls in scale. 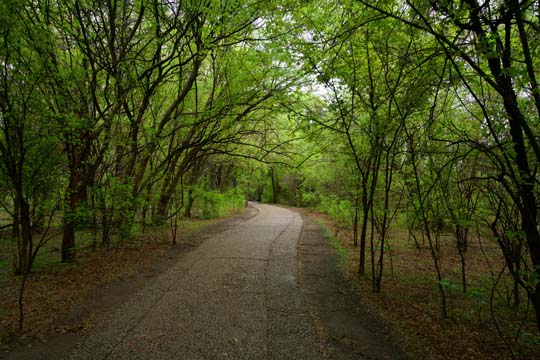 There were lots of greens around the trails, and Victoria Falls appeared with a huge sound of water falling after 5-minute walk from the entrance. We walked along the main trail to enjoy the views of the falls from many different angles. Even though it was dry season, we still had to put on our rain coats when we passed by some areas due to the water from the falls. There were some people walking aside of the falls in the Zambian side to reach to Devil’s Pool where tours were available only in the dry season. There were also people kayaking at the bottom of the water falls where there were not much water. As we walked toward the end of the trail, the water got less and less and more dry land with rocks and cliffs appeared on the surface, which was totally different from what we saw on Google when we had searched for destinations of this trip. However, we actually liked the view of the dry surface as well and were amazed by the two different views of dry and wet, which cannot be seen during the rainy season. 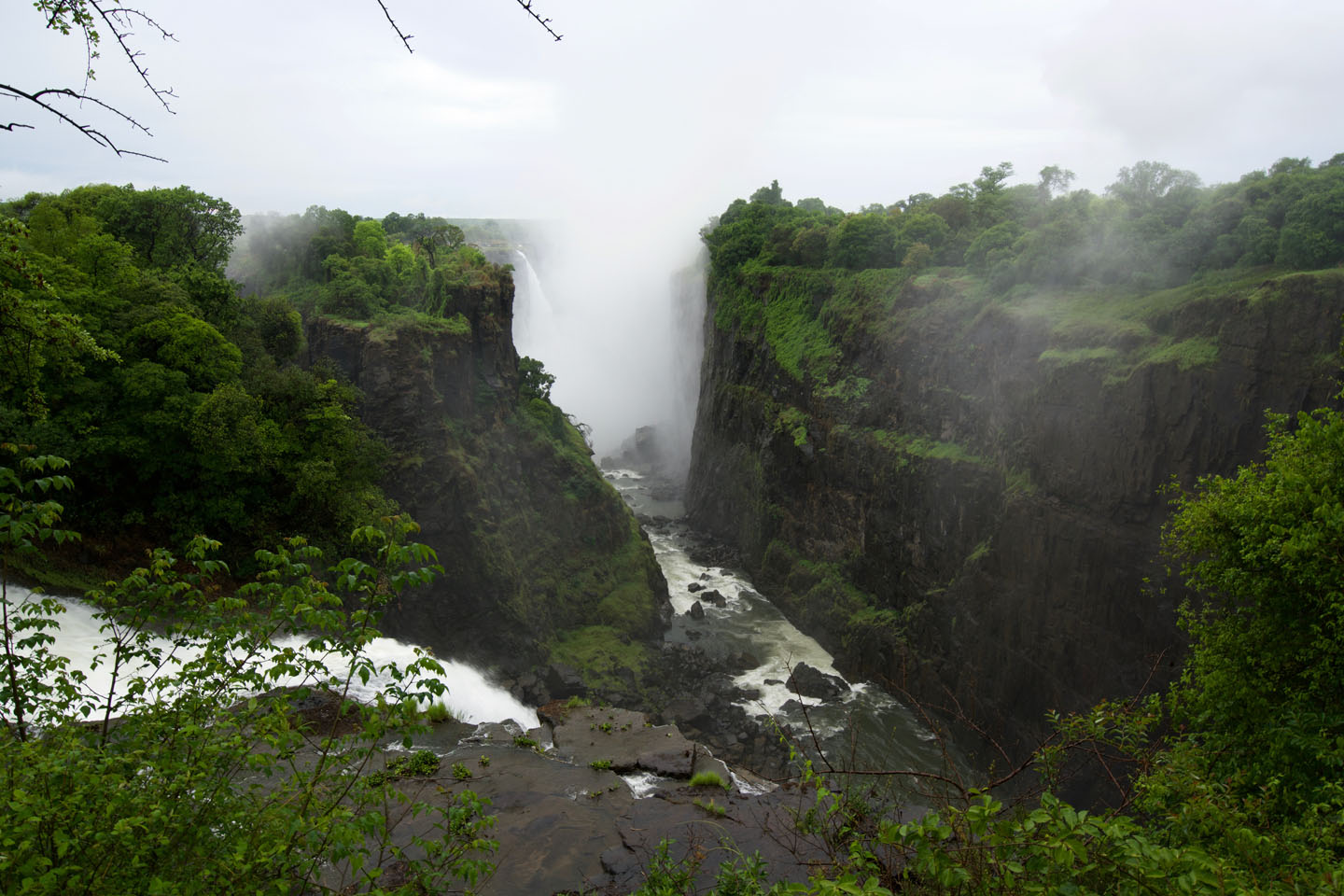 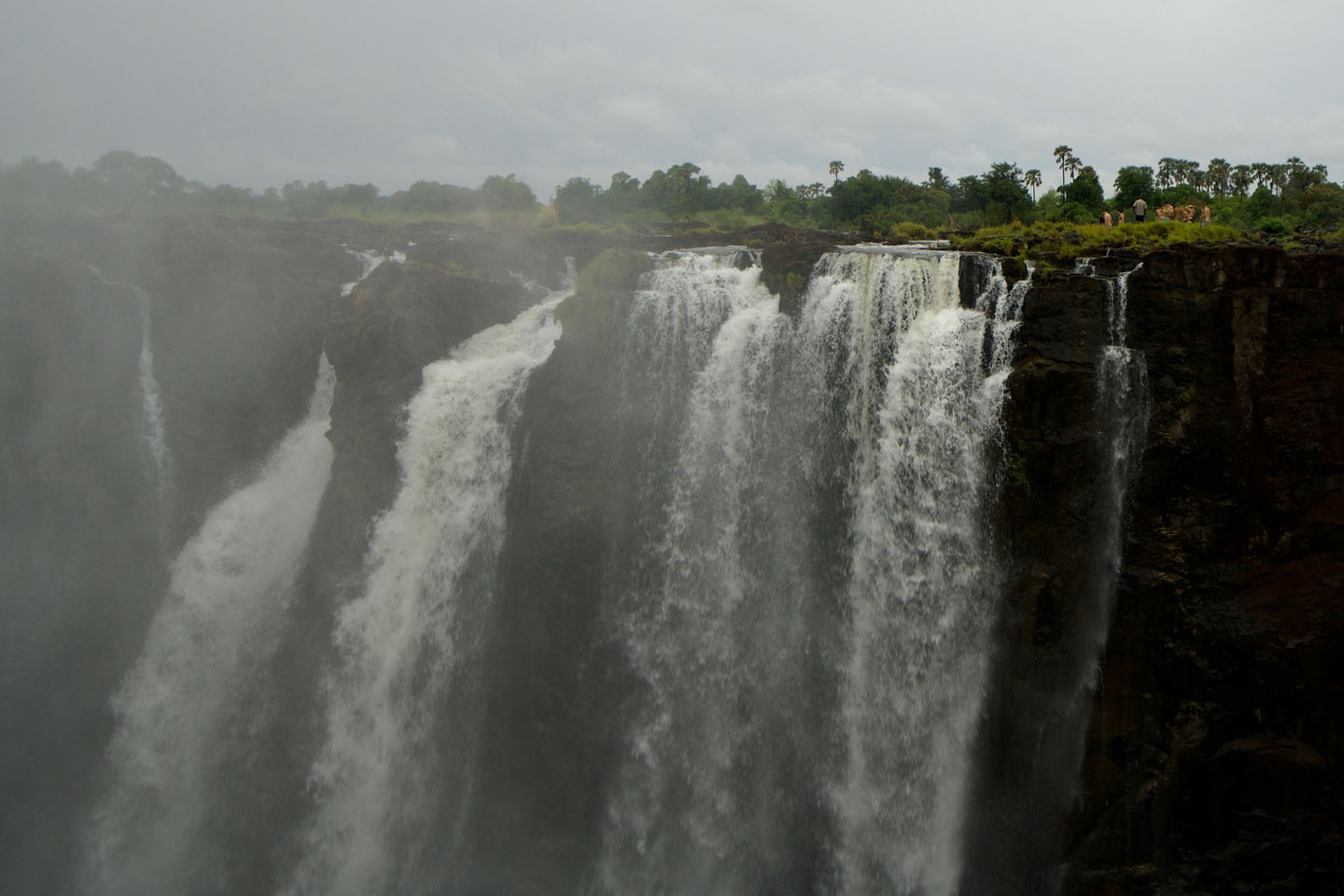 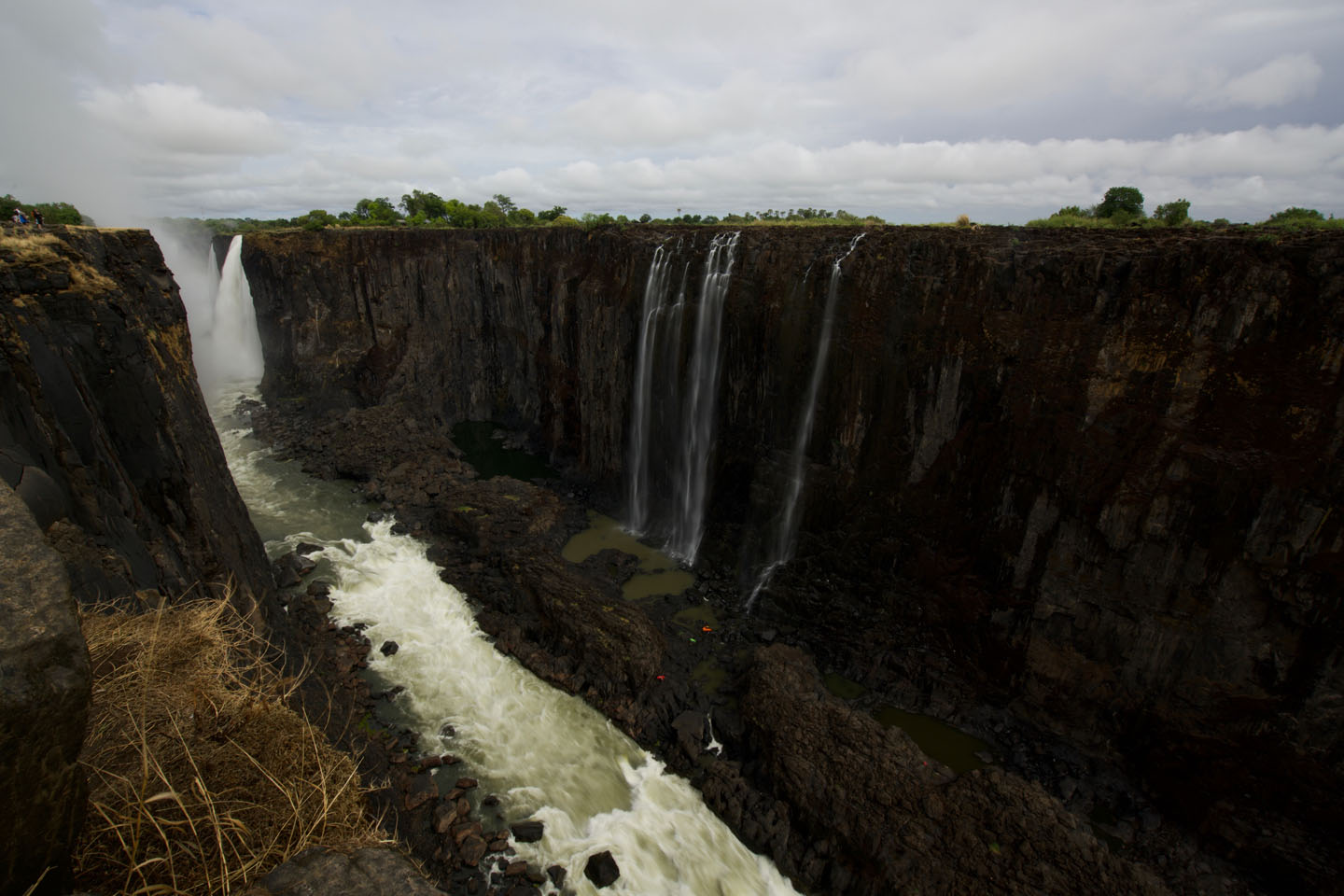 On the way back to the entrance of the park, we made a detour to see the bridge which was on the boarder between Zimbabwe and Zambia and other parts of the Park where we saw a family of monkeys including a pretty cute baby monkey. After we left from the park, we headed to the Zimbabwe custom to walk on the bridge on the border with Zambia. At the custom, we obtained tickets authorizing us to pass the border without a stamp on our passports. The bridge was not very wide but had one lane for cars, one train track, and two passenger sidewalks on both sides of the bridge. A train happened to pass by the bridge and it was surprising that the train was longer than the whole bridge. On the bridge, there were a place for bungee jumping and some local people selling local handicrafts. There was a line of brave people for the bungee jumping and we saw two kids actually jumped off from the bridge. 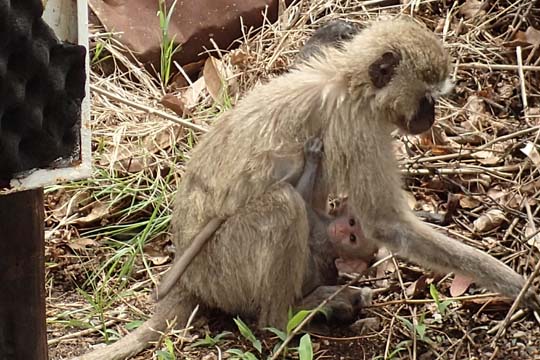 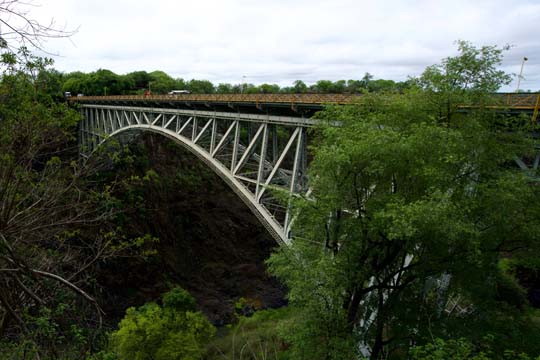 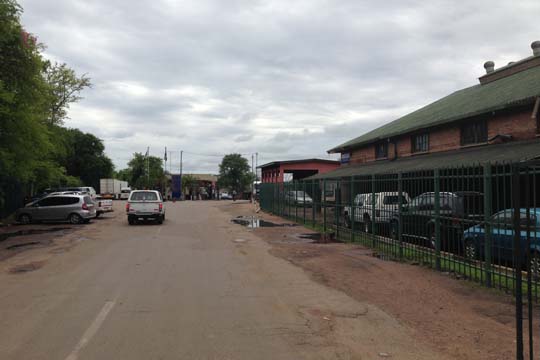 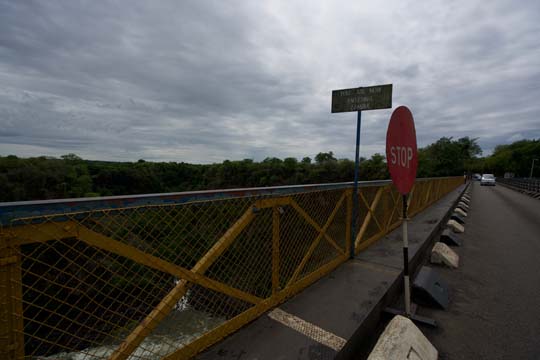 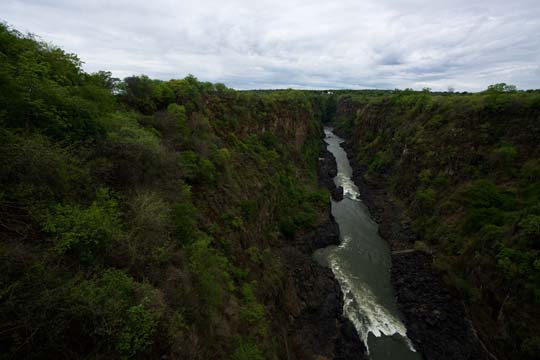 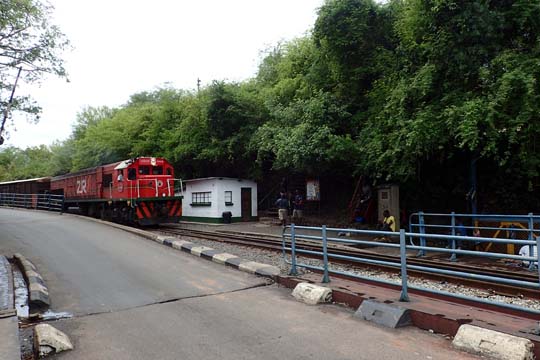 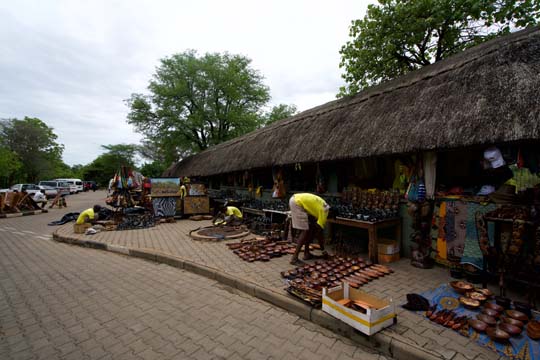 We came back to the parking lots of the national park and left from there by 11:30am. By the time, the gift shops across the park entrance had opened, and there were so many items at the shops. The same driver sent us back to Shoestrings Backpackers to pick up our luggage and then got on the road to Botswana.

A good portion of the trails in the Park was wet due to the water from the falls, even though we visited during the dry season. In addition, toward the end of the main trail there were no blocks or fences on the edges of the cliffs and thus it could be dangerous, especially when taking pictures. We strongly suggest wearing waterproof and non-slip shoes for your own safety. Rain coats and waterproof bags are helpful to protect your valuable belongings like cameras.

Bridge on the border between Zimbabwe and Zambia

Walking only on the bridge was not considered as crossing the border to the other country. However, passports were required for examination at the custom office to obtain a ticket for access to the bridge. 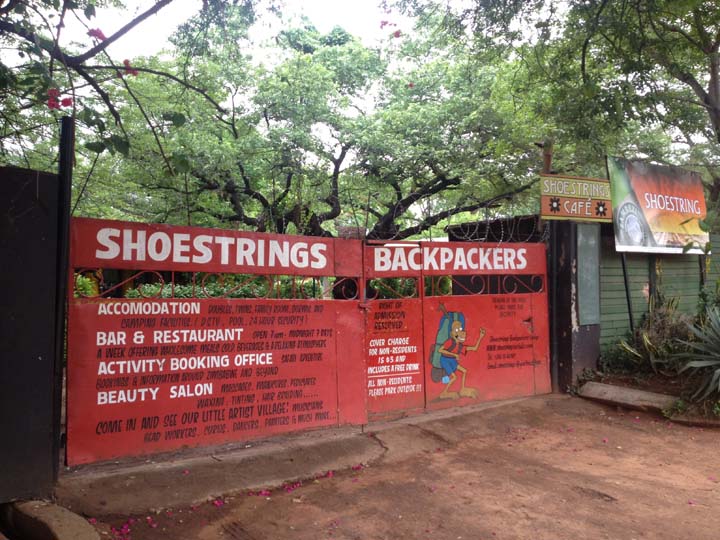 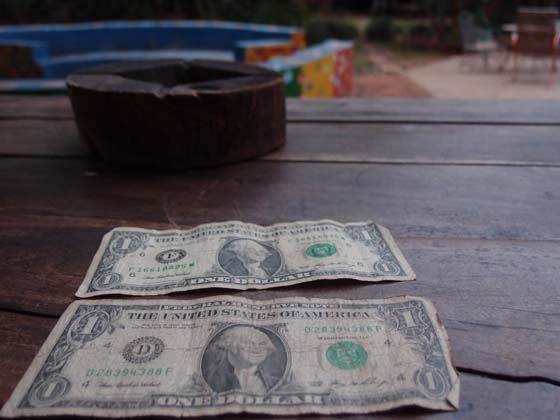 Old US$1 bill on an outside table at Shoestrings Backpackers

WiFi: Yes. Extra charges based on usage time. We paid US$2 for 2 hours and 10 minutes.

* The website of this hostel said WiFi was included in the price but it was not.

Meal: Not included. Food and drinks available at a bar stand in the hostel.

The hostel had private rooms and shared dormitory. A shared computer and some lockers were available in the common area. In outdoor space, there were some stands selling handmade crafts and drawings by local artists. As noted on its website, this place played really loud music until late night. Also, there were a lot of mosquitoes everywhere in the property regardless inside or outside of the building. It was very hot and stuffy in the room even at night time and all three bathrooms were not very clean with cold water only. For those reasons, we will look for a different hostel if we have a chance to visit this town again.

This taxi was reserved through a receptionist at Shoestrings Backpackers in advance. It is better to take a taxi to the national park from the town because there are wild animals around the town. 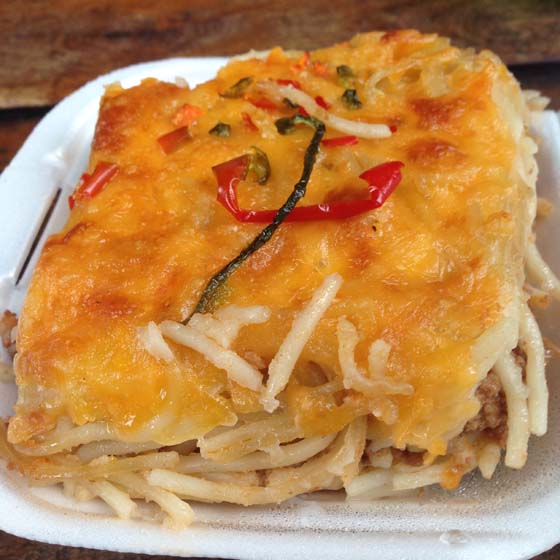 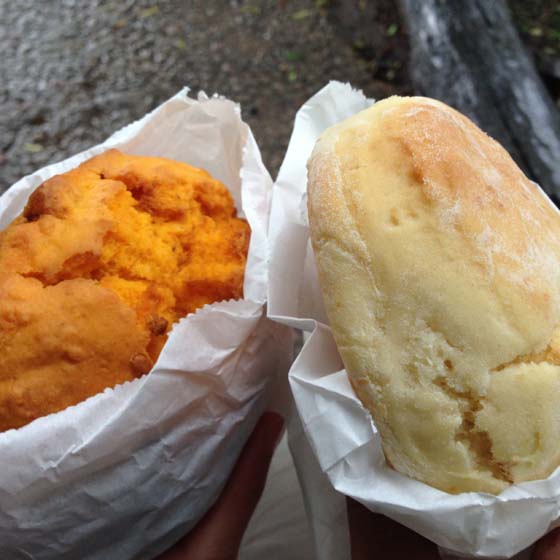 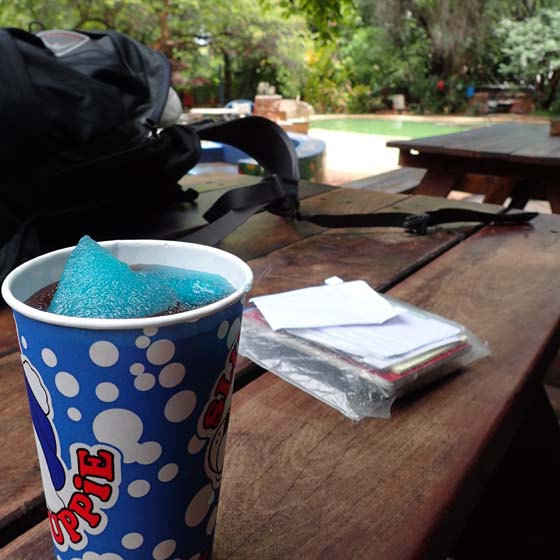 We purchased the cooked hot food (Baked pasta, bread, and a bottle of juice) for US$5.10 from one of the supermarkets for dinner and breakfast of the following morning. The food used much oil but the taste was not bad.

We could not find any information about how to get to Loango National Park until we met Remy, our tour guide at Lope. Be...
2016.12.07

Taxi Brousse Terminal in Morondava In the morning, we took a quick shower, packed our luggage and took a pedicab to the...
2016.12.28
Home
All Trips
2016 Dec: RTW Trip