As discussed with Yves, the tour guy we met in the previous day, we would be visiting the well-known Baobab Avenue for sunrise and sunset with a forest walk in the Kirindy Forest Reserve during the daytime.

Avenue of the Baobabs – Sunrise

Around 4am, Yves and a driver came with a 4×4 SUV to pick us up from the hostel and we got on the way in the dark. Due to the hot weather in the previous day, the heat was still stuck in our bodies. With the cool wind coming through the windows during the ride, we started feeling a bit better. 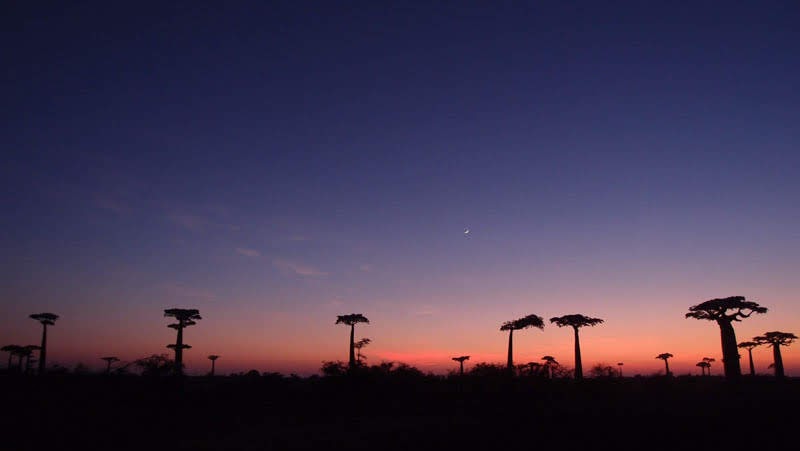 The moment the car stopped, we were completely astonished by the huge baobab trees. It was absolutely quiet. The sun had not yet came out while the sky started turning red and light purple, which added some shadows to these humongous trees, making them more mysterious and thrilling than any pictures we had seen.

We walked by part of the Baobab Avenue to an open field, set up our cameras and enjoyed the unique sunrise with the baobab trees. Although the trees at the east direction were pretty far away so didn’t seem so overwhelming as those in the Avenue right behind us, the changing colors of the sky with the unique shape of the far baobab trees no doubt made the scene incredibly amazing. As the sun came out, the sunlight spread on the Avenue, lighting up the trees softly. We also started seeing the aboriginal people from the village. 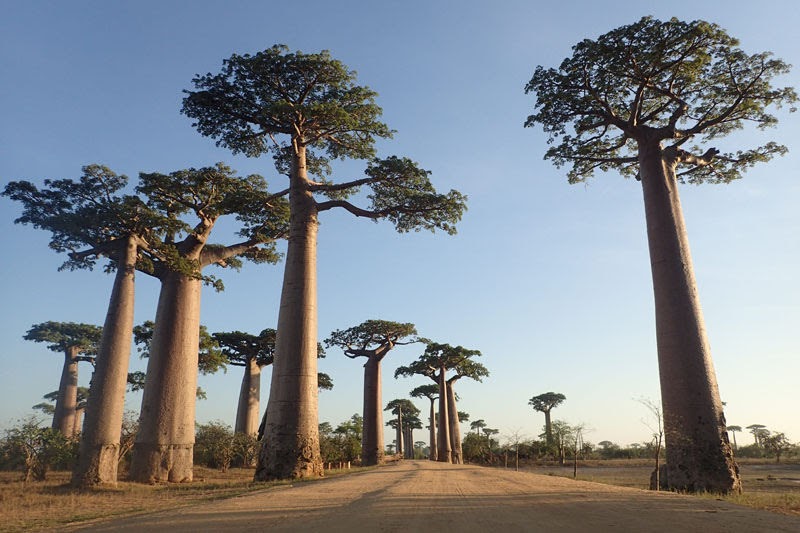 The sun came out after 6am and the temperature increased quickly. On the way to Kirindy, Yves and the driver bought coffee from a small shop in a village. We arrived in Kirindy around 7:30am. The driver parked the car between a lodge building and a half outdoor seating areas. After having water and two bites of bread, we followed Yves and walked into the forest.

The trees here generally were smaller with lighter green comparing to those we saw during our forest walk in Lope and Loango. In 15 minutes, we saw two sifacas, a mother with her kid, at the top of a tree, making us very excited. The color stood out so much that we could not move our eyes from them. On the way back, we saw another pair even closer and they also stared at us for a while before jumping away. 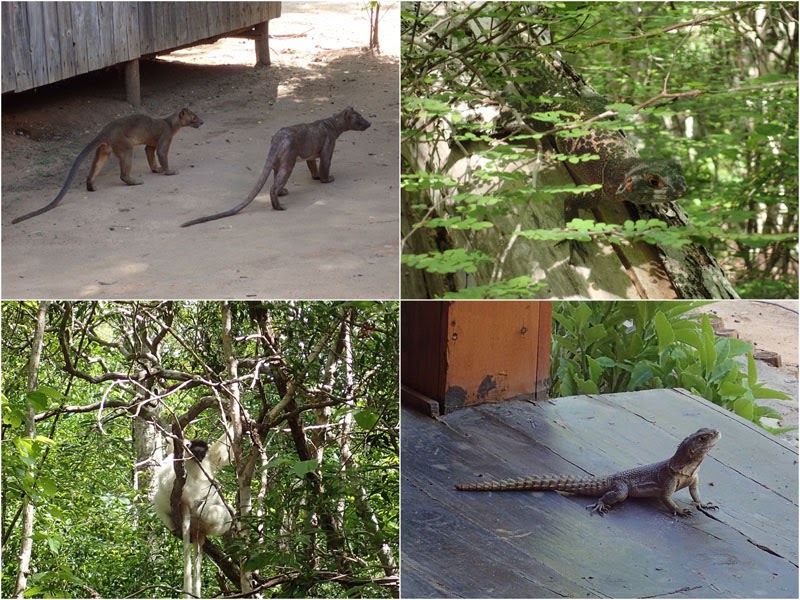 We came back to where the car was parked around 10:20am, and just took some rest as we were totally sweaty. Yves was nice to let us rest in the lodge building. One of the rooms had a few single beds so we could lay down. There were no A/C or fans but both the front and back windows were widely open. However, some heat was still stuck in our bodies so we got to relax a bit but couldn’t really rest well.

Around 2pm, we stepped out from the room and went to the half outdoor seating area. As we were trying to some cooler and fresh air, we were very lucky seeing a small lizard and even a pair of fossas walking by the area. They didn’t stay long but good enough for us to take some pictures. Meanwhile Yves noted to us not to get too close as they could become aggressive.

After 3:30pm, we got back to the car and Yves showed us some unique baobab trees, including the two swirling together and one growing horizontally, as well as some baobab fruits. What interested us the most was the baby baobab trees. It was really amazing how tiny they were comparing how huge they would become in the future. On the way, Yves also pointed out a few constructions where some commercial groups were trying to build lodges in this area for sightseeing. 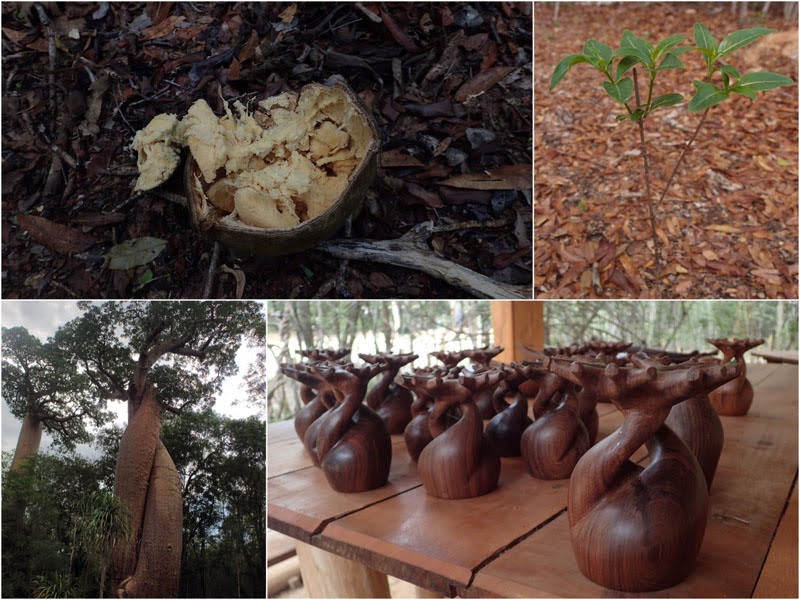 Avenue of the Baobabs – Sunset

Before sunset, we got back to the Baobab Avenue and some tourists were taking pictures already (mostly Asians). Some local people walked on the Avenue as one of the normal streets, while others were selling souvenir, mostly wooden baobab tree miniatures. In order to make money, a group of kids were asking us to take photos of a big chameleon crawling on a branch that one of the kids was holding. As we walked down the Avenue, another group of kids came along, asking us to take pictures of them and then asked for money.

As we were looking for a good spot to catch the sunset, three little girls came across and said something to us. We looked at them as they walked away and just randomly said bye to them. The two older girls responded first and the little one also waived to us as they went further, limited but warm interaction. The weather turned cooler and comfy, and the sunset was much closer to the Avenue comparing to the sunrise, which was probably why the tourist groups came in the afternoon. We fully enjoyed the view until the sun was completely gone. On our way back to hostel, the local people starting setting up fire as the light and also to cook dinner. 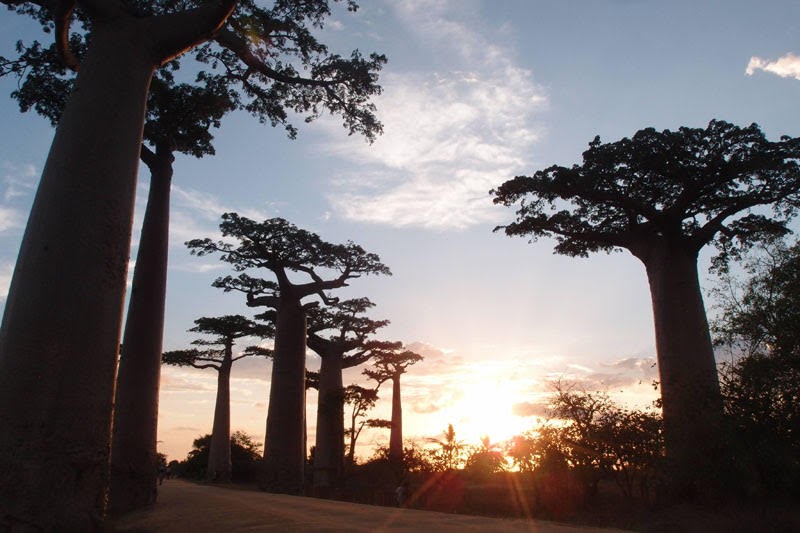 Around 8:30pm we were sent back to our hostel. After a quick shower, we walked to Le Corail restaurant for dinner and then got back to the hostel to sleep. Although the temperature decreased at night, the room was still hot and stuffy. 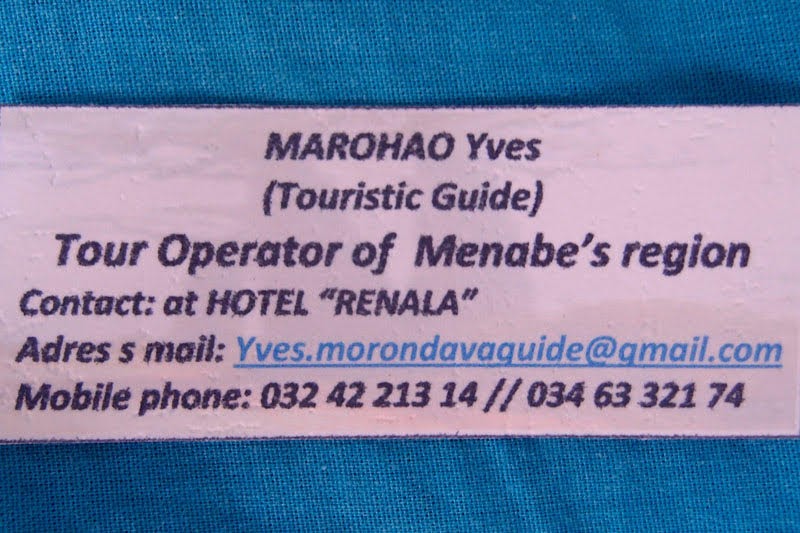 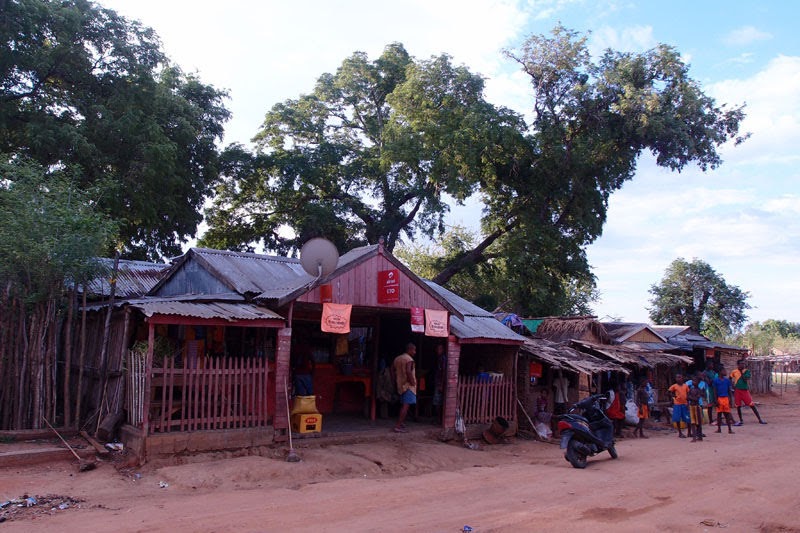 Tour guide: Yves
Ride time: 45 minutes from Morondava to Baobab Avenue; 1 hour from Baobab Avenue to Kirindy Forest Reserve
Price: 280,000 MGA/ day-trip for two persons; Park fee for Kirindy Forest Reserve 35,000 MGA / person
Payments: Cash only
Tripods were allowed.
To capture the great scenes, we decided to go for both sunrise and sunset at the Baobab Avenue, and then spent the daytime in Kirindy Forest Reserve. As this was a private tour, there was more flexibility so we were able to enjoy the whole sunset until it got completely dark, when all other tourists were already gone for a while.

We brought water and bread with us during the tour.
There was a village between Baobab Avenue and Kirindy, and a small shop selling snacks and drinks was right on the main road.

In the early morning, there were countless flies in the field next to the Baobab Avenue so we strongly recommend wearing long sleeves and pants to avoid distractions from the great scene. One of the great things about the sunrise here was the quiet nature, as most tourists only came for sunset. During our visit, there was only another girl who also took a private tour for the sunrise.

It appeared to be a small lodge area as there were a building with rooms, a half outdoor seating area like a restaurant and a few public restrooms. However there were just a few staff without any guests when we arrived, so we could not tell how actively this place was operated.
During our visit, the staff unlocked one of the restrooms so we could used it. It was smelly and not clean, but for sure better than nothing. 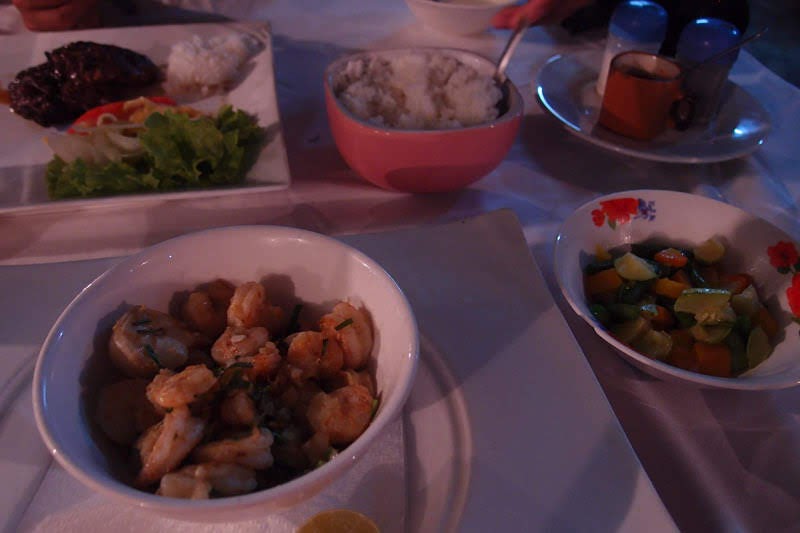 It was half outdoor seating and no A/C or fans. There were some winds but not strong. There were a good amount of tables and the waitress was nice. We ordered two dishes for 34,000 MGA. The seasoning for the steak was really good and the garlic shrimp with vegetables was pretty tasty. Sadly due to the heat, we were not able to finish all the food but it was a good place for a sit-down meal.

Please refer to the post Moving from Antananarivo to Morondava for further details.