As the limited discounts are usually sold out very quickly, it is highly recommended having the following information ready before booking:

Once the reservation is made, the tour company sends an email confirmation along with reservation details, including invoice, itinerary, visitor guidelines, travel information, online forms, etc. It might seem lots of documents but you definitely should read them to ensure you are well prepared before departure for the adventure.

We purchased “Crossing the Circle: Southern Expedition” cruise by Quark Expeditions through Polar Cruises. Below are the travel details of our own experiences. 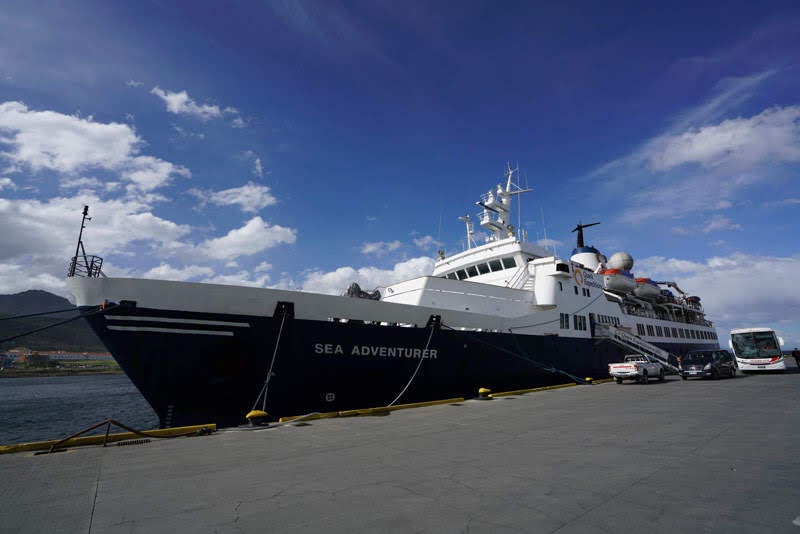 Based on our preference, schedule and budget, we constantly checked the websites of a few tour companies and finally booked this tour late September with Polar Cruises by email and phone.

The booking process was relatively easy and Polar Cruises sent us all the documents on the same day. They were also very responsive to emails when we had questions.

A brief daily schedule was provided via email after our booking was made. Before the embarkation day, an optional briefing was held at a hotel in Ushuaia. In addition, every evening during the voyage a daily program was provided which listed out the activities / events (such as Zodiac cruise, landing, presentations, movie nights) for the following day in details.

There was a bulletin board outside of the main lounge where the Expedition Team shared information, including wildlife, news and maps. 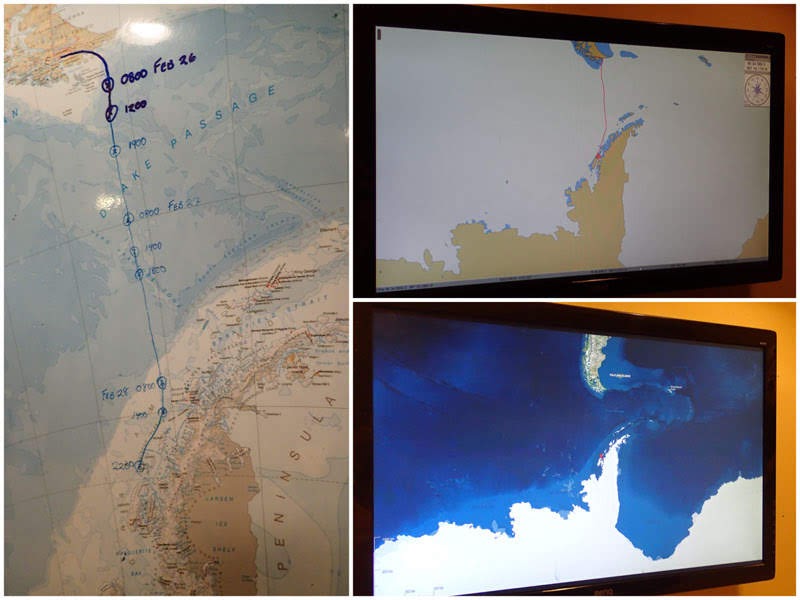 The package included one night at a hotel in Ushuaia before embarkation day and breakfast on the embarkation day. The tour company separated the whole guest group into two different hotel, and we stayed at the 3-star Hotel Las Lengas. The room was not big but standard and comfy. Breakfast buffet was included which provided various types of bread, cheese, ham, coffee, tea and juice. 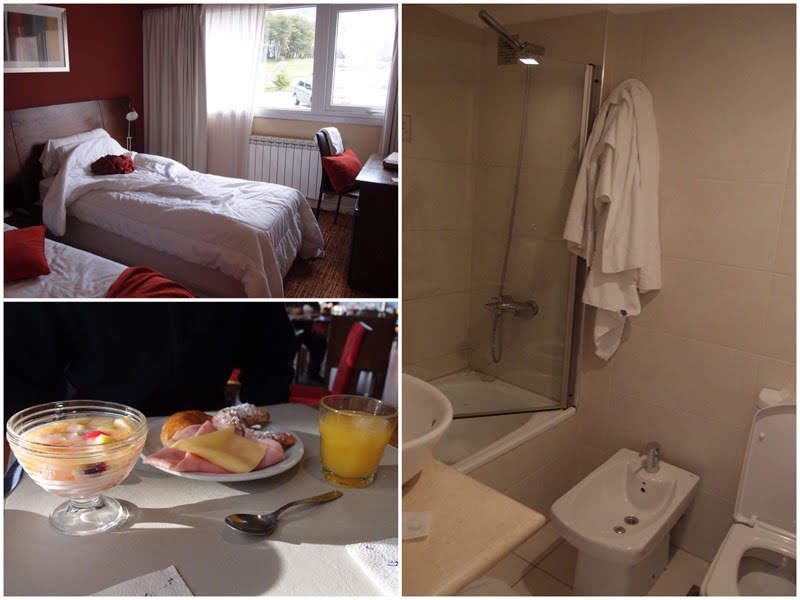 Based on instruction from the tour company, we left our luggage in the hotel lobby in the morning of embarkation day and they were put into the shuttle bus from the hotel to the seaport. The crew loaded all the luggage on board and then sent to each guest room. 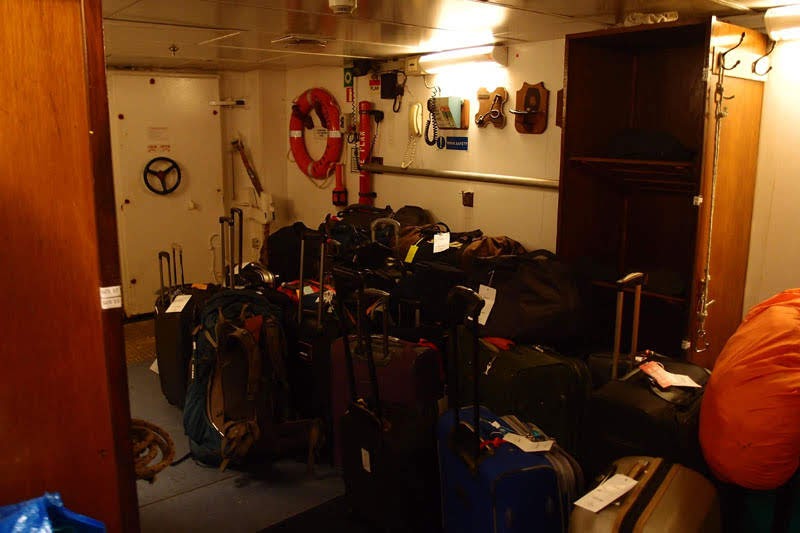 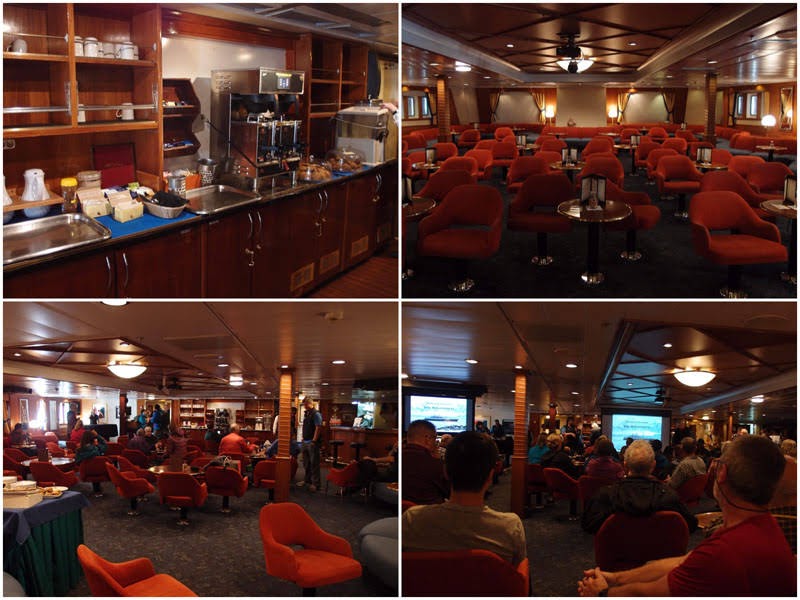 Throughout the voyage, there were many sessions of both formal and informal presentations and the Expedition Team members presented various topics about the natural environment and wildlife in Antarctica, along with history about the continent discovery. All these presentations were held in the main lounge. They were also available on TV in the guest room.

Based on the observations from Zodiac cruise and landing activities as well as questions from the guests during the day, they also added in different topics. For instance, there was a pure white Gentoo on a day of landing and the team included this in the presentation afterwards to introduce the cause as well as the chance of occurrence among different types of penguins.

At the end of each day, the leader of the Expedition Team also did a briefing for the day along with information for the following day, including weather forecast and observable wildlife. 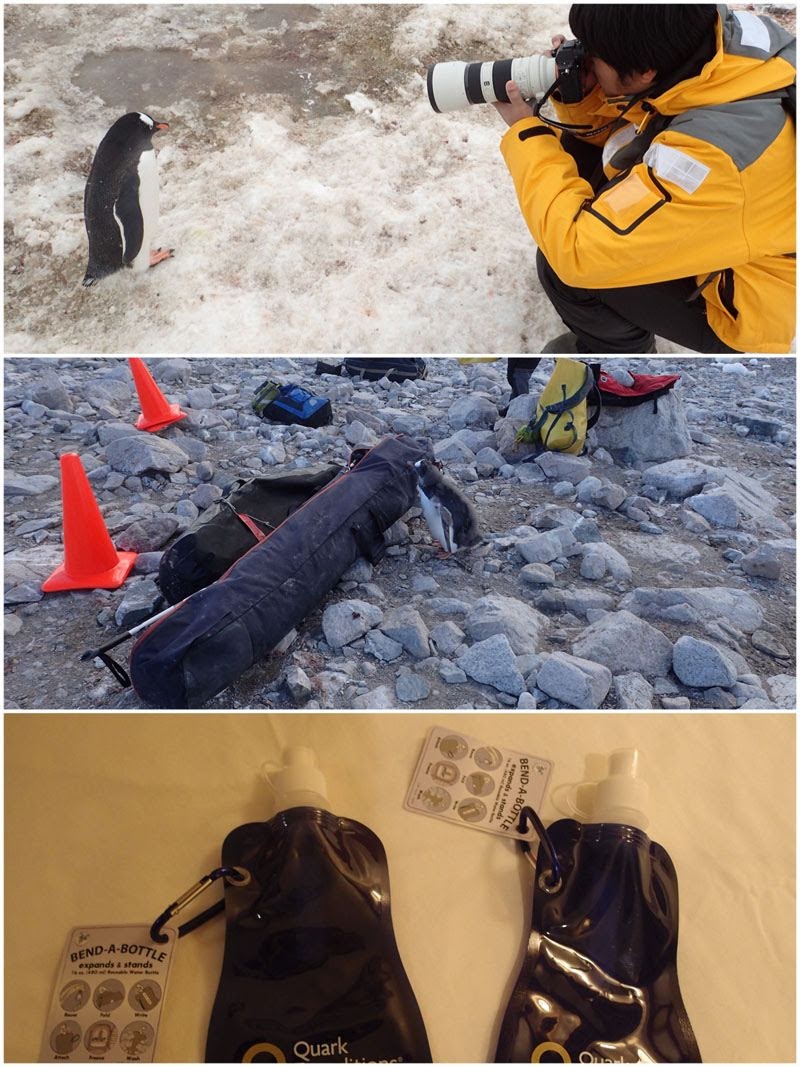 A pair of water-proof pants were a must as it was very likely to get water splash when taking Zodiac. While the tour did not provide the pants, they could be easily found at the sport wear stores in Ushuaia, although it could be much more expensive (we bought 2 pants for about US$90).

Parkas were placed in the guest rooms based on the size requested through the online form submitted by each guest. Then a session was held for people to gather and exchange for proper sizes. The parkas had two layers, a black one inside and waterproof yellow one outside. The two pieces were attached by zippers and could be separated.

After embarkation, the Expedition Team helped the guests to try on the boots and also demonstrated the cleaning process, which was required every time before getting on and after getting off Zodiac. 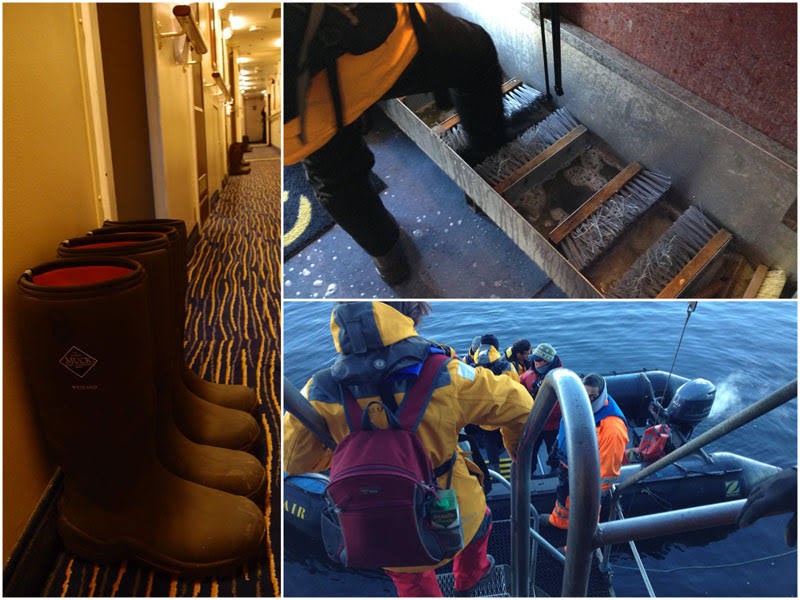 As most people may know, the selling points of the cruises to Antarctica is the nature and wildlife, which were what we went for, so we did not have high expectations about the on-board food. Turned out a good amount of variety and options were provided each meal and we were very pleased by the food provided everyday.

Breakfast, lunch and dinner were provided at designated times. Breakfast and lunch were buffet while a daily set menu (including appetizer, main course and dessert) was provided for dinner. Sample display was set up at the entrance of the dining area to show all the options from the set menu. Seats were first-come-first-served.

Water, coffee and tea along with cookies and crackers were available in the main lounge throughout the voyage for free. Occasionally there were snacks and light food after Zodiac cruising and landing activity. There were also other drinks available for sale.

One of the meals was set up as B.B.Q. buffet, and all the guests and Expedition Team members enjoyed the food on the deck surrounded by the beautiful mountains and icebergs. On the very last night, plenty sweets and desserts were provided as part of the dinner party. 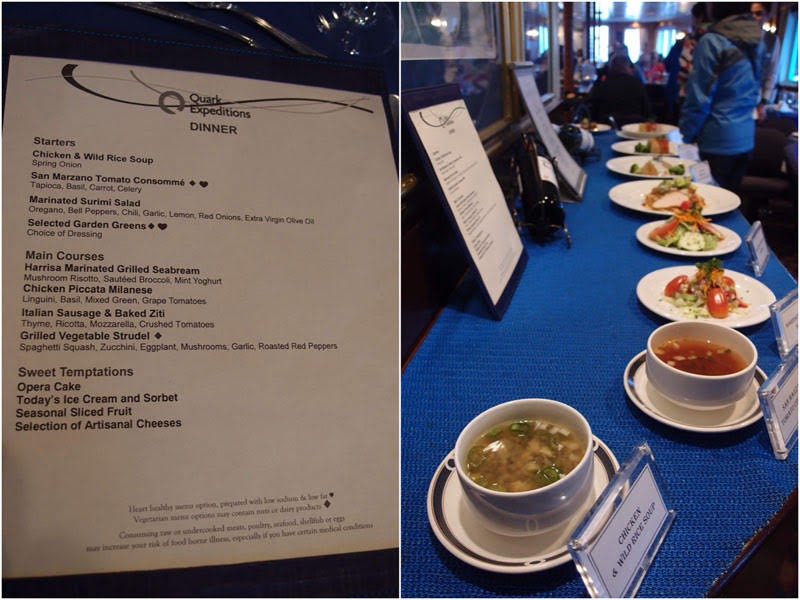 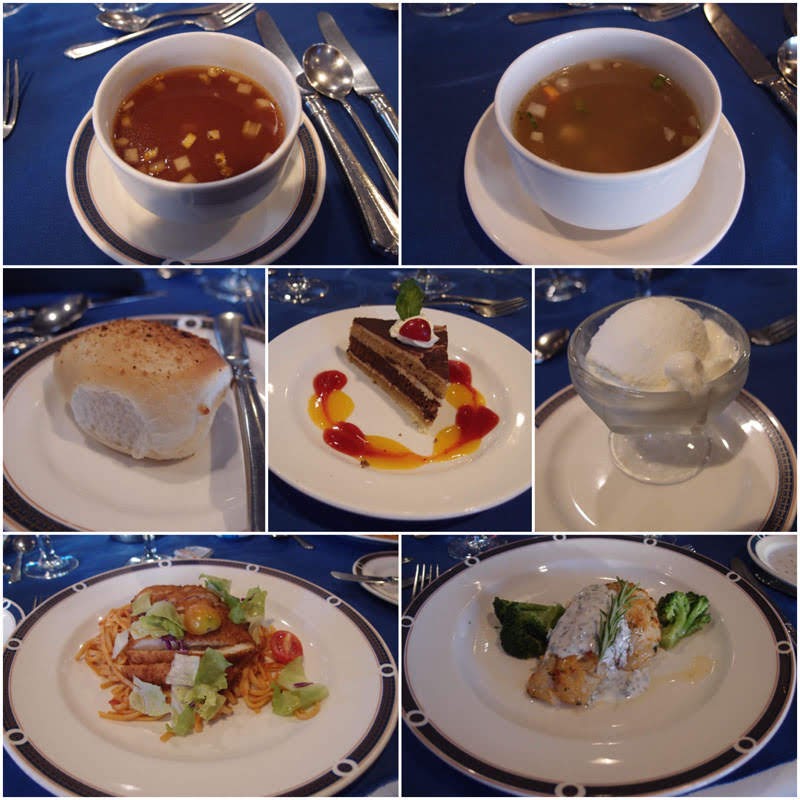 Our ship was Sea Adventurer, and this voyage was her last round before a full renovation. However, the cabins were well maintained, and our room was nice and clean with daily housekeeping.

The ship was equipped with a main lounge, dining room, small bar with sitting areas, small gym, library and a shop. There were a good amount of books in the library and also two public computers for people to upload and share pictures. 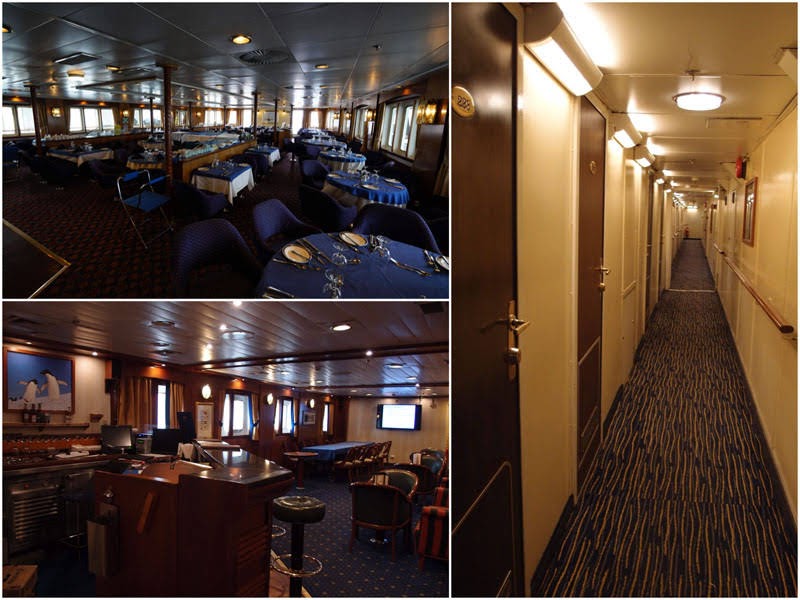 Our room was equipped with two single beds, two wardrobe, a bathroom,  a dressing table set and a TV. There were also a security box, a hair dryer, two large and small towels, bathrobes, as well as shampoo, conditioner, body wash, shower caps and toilet papers. Our room had a  window, through which we had seen penguins and seals many times during the voyage. 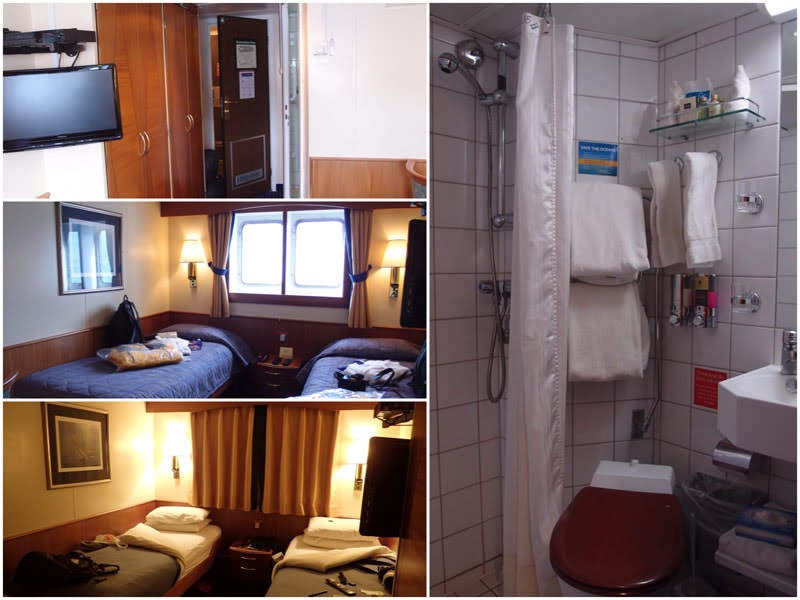 In case of emergency, our tour company required a minimum insurance coverage of $50,000 per person for outside of the home country.

There was a doctor on board to provide medical assistance as needed. On the embarkation day, he did a briefing and also provided free pills to guests for motion sickness. On both ways before passing through the Drake Passage, the Expedition team leader presented a slide of wind forecast and expected weather condition. Another clear sign of heading to Drake Passage were lots of sickness bags along the handrail in the hall ways and stairs prepared by the crew. 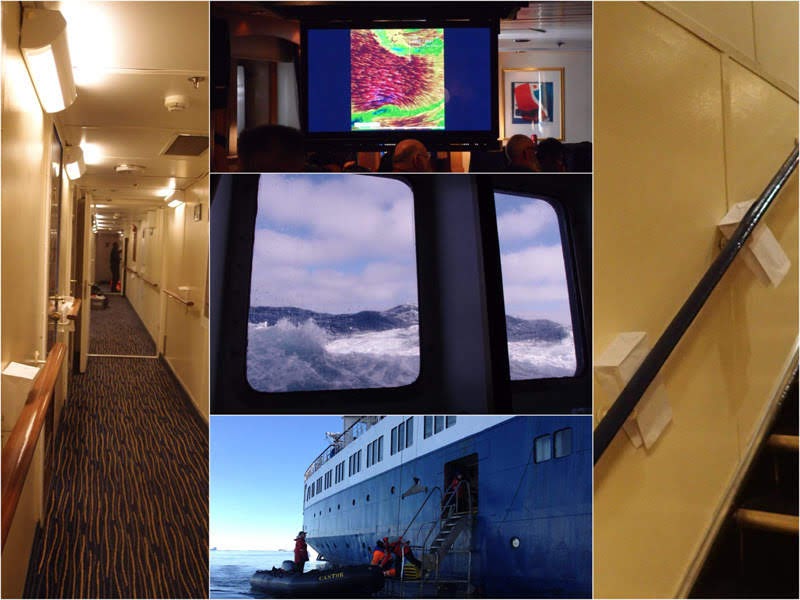 During passing the Drake Passage, it was so shaky that it was impossible to walk straight. The view from the lower deck windows basically just like a laundry machine and the waves even constantly hitting the windows on the upper deck (as shown in the picture above, which was at the white-painted level of the ship). However, the whole crew was still providing all the services normally and the Expedition Team did the presentations as scheduled. Whenever the crew saw a guest, they said hi friendly and check if any help was needed.

Throughout our voyage, no one had significant medical issue but there were lots of guests got motion sickness while passing through the Drake Passage to Antarctica (more than 1/3 of guests did not show up for meals and 2/3 of the guests were not able to participate the presentation that day). On the way back, it felt less shaky and more guests were able to move and walk around in the ship.

After passing Drake, we heard from other guests that the doctor was very helpful and considerate to take care of people who felt sick, and the crew also delivered food to guest rooms for those who were not able to make it to the dining room. This was definitely a great help before arriving in Antarctica. 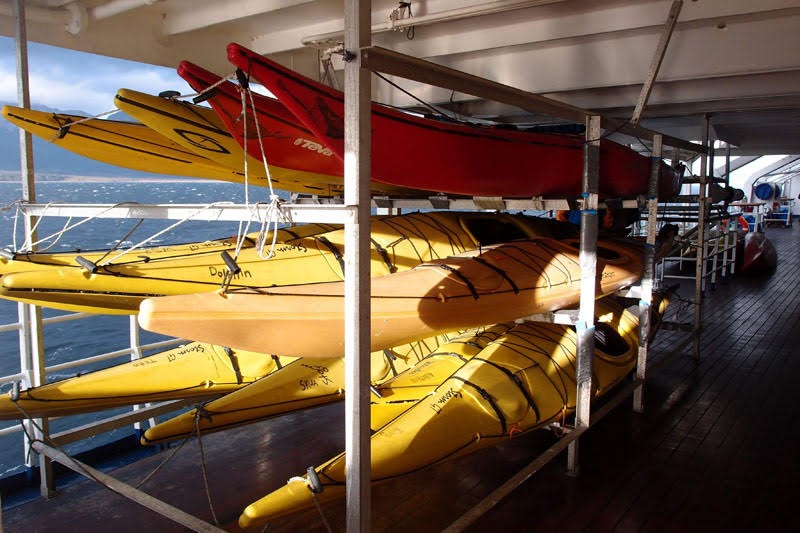 Kayaking was available on our voyage. The cost was $995/person if booked through our agency. Previous experience and pre-booking were required. After embarkation, the Expedition Team announced that there were still spots available and there were offered at a discount price.

The kayaking was held during the Zodiac cruise and landing sessions, so the total length of activity time was not much different between kayakers and other guests. However the kayakers would always be the first disembarking team.

Other than the observation decks, the captain room was also a great place to visit, not only to see the navigation but also to discover wildlife upfront. On one of the days we stayed here for a while and saw a group of wildlife far in the front, which turned out to be a big group of orcas. The Expedition Team leader then worked with the captain to get the ship closer to them so all the guests on the observation deck were able to see this impressive natural scene. 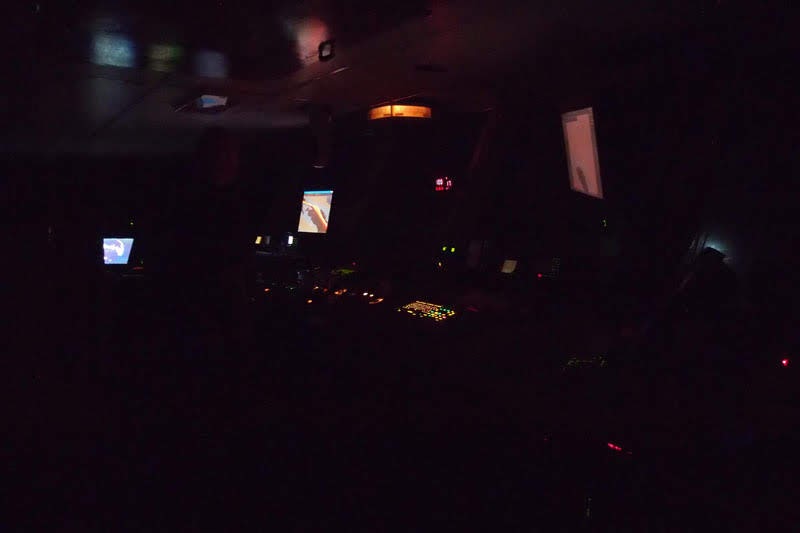 Other than the daily housekeeping service, laundry service was also available on board. 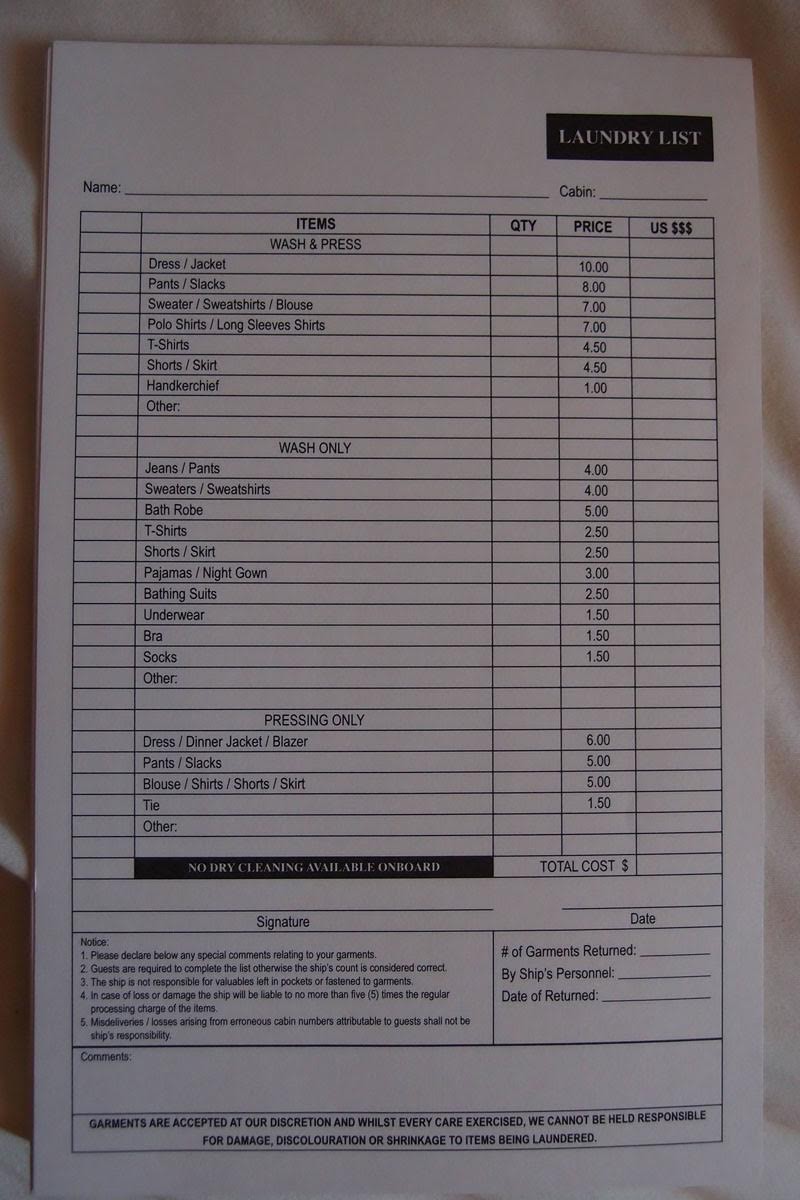