Our adventure in Madagascar started from Antananarivo, the capital and largest city of Madagascar. People often called the city Tana.

First Night in the City of Antananarivo

On December 23, We arrived at Madagascar Underground Hostel in the evening and the staff checked us in quickly using our online reservation record. We left our luggage in the room and headed to the restaurant recommended by hostel staff.

On our way out, there was a safety reminder on the door saying that it might not be safe walking around alone in the neighbor after dark. A few Americans going out for food as well so we left with them.

They told us that they were in the south of Madagascar for teaching English as part of a volunteer program, and they came to Tana a few days ago for vacation. When we told them our plan going to Morondava, one of the guys told us it was one of his favorite places in Madagascar, better than the crowded Tana.

When we think about food, Madagascar always comes first in our mind because of SAKAMANGA. Since price level in Madagascar is lower than the other African countries we visited, the food was the best but the price was cheapest at the same time. We definitely recommended this restaurant to those having a chance to visit Tana!

Full Day in the City of Antananarivo 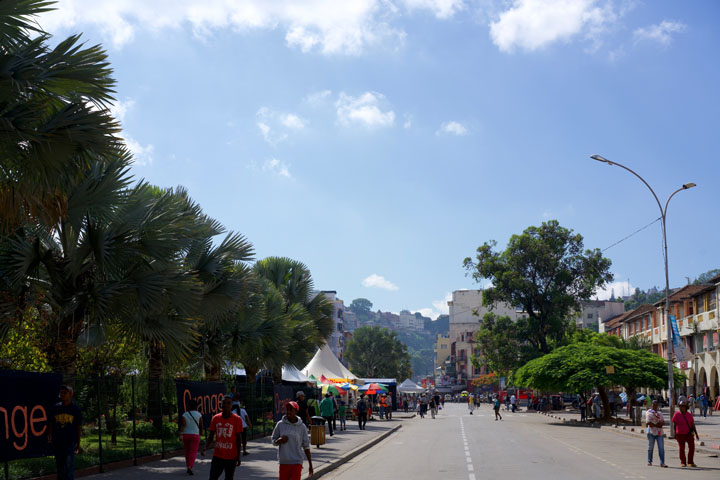 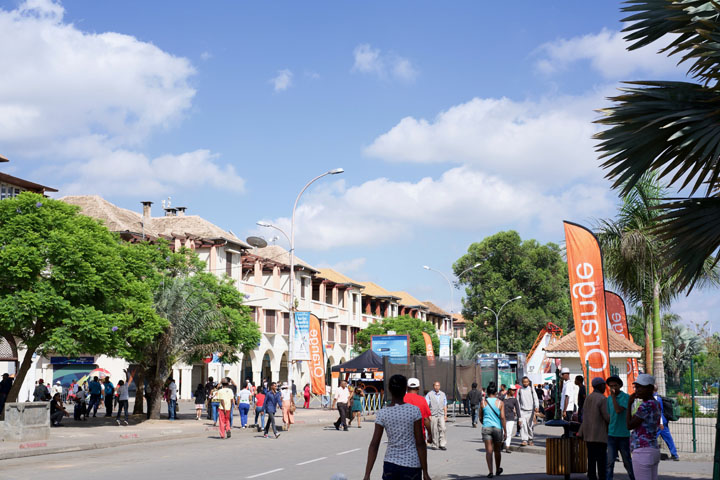 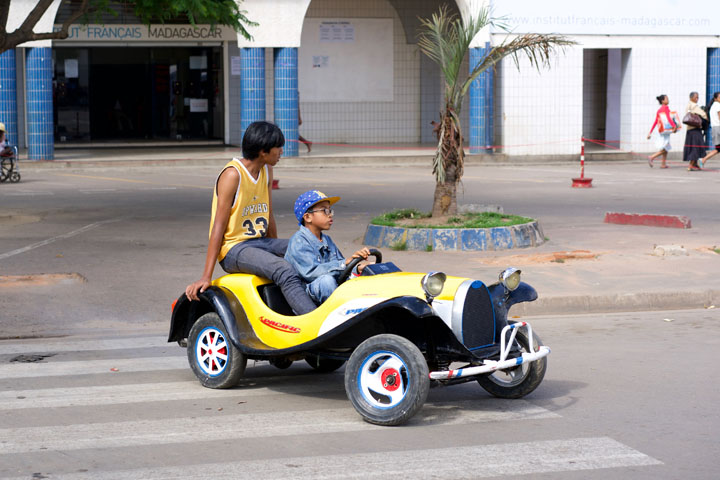 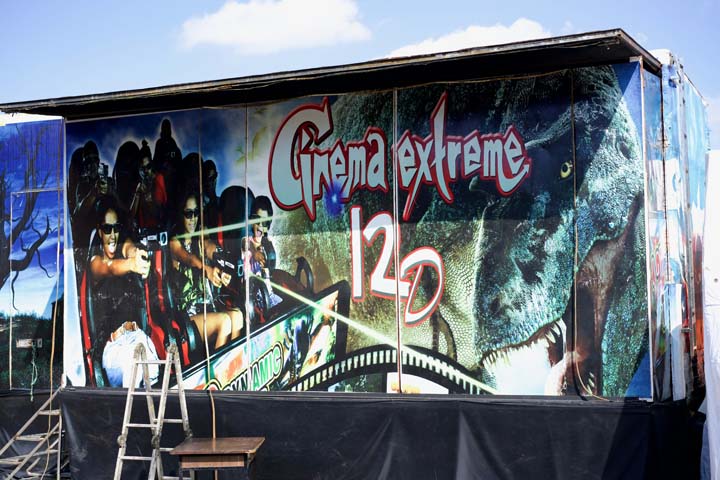 On December 24, we woke up around 8:30am and took a walk to La Ruche, a bakery recommended by the hostel staff for breakfast. La Ruche was not yet open when we arrived so we just walked around.

Perhaps because it was Christmas Eve, there was a large street event with simple rides and games as well as many street vendors selling clothing and food (even cutton candy!). The event had not yet started but there were some people in the square already. Though within the crowds we still saw a few street children with broken shirts or no shoes.

Around 9am, we went back to La Ruche, and just like SAKAMANGA, it instantly became one of our most favorite place. Ｕnlike SAKAMANGA, this place was for local people so each pastry was about US$ 0.6. Also, the owner was very nice and told us to be cautious of pickpocket after we enjoyed the breakfast.

The street in front of La Ruche got much busier for the event. Both adults and kids were enjoying rides and shopping at the event. We did not buy anything at the event but enjoyed the atmosphere of the Christmas event.

On the way back to the hostel, we found a Fanta soda with pomegranate flavor for the first time. We bought it from curiosity but it was really tasty and much better than Fanta orange.

We also went to another restaurant called Fatapera. This time we asked the hostel staff for the local restaurant not like SAKAMANGA because we would like to experience the food local people eat. 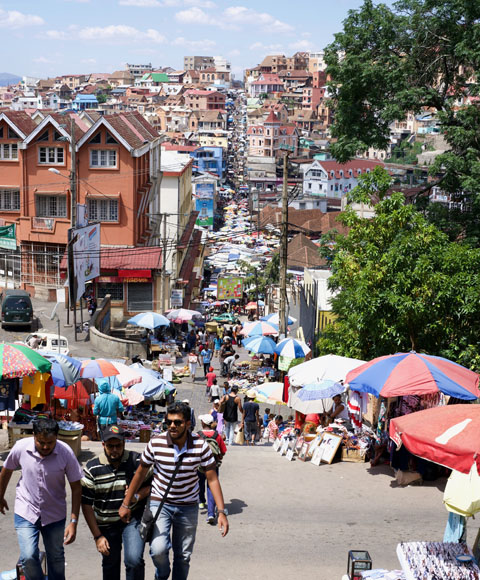 View from a park at top of hill

We walked up the hill a bit and took some stairs, where we saw a woman with her kids, begging for food and money. In the same area, there was a night bar where a lot of foreigners visit. The wealth and poverty were next to each other in Tana.

The stairs led us to a drive way, and we walked along the way, passed by a few jewelry stores and then arrived at the restaurant. The drive way pretty narrow and was made with hard stone roads.

Foods at Fatapera were also great but based on the prices of menu, it seemed like this restaurant was also for tourists. At least, we experienced the local atmosphere on the way to the restaurant.

After lunch, we stopped by the park on the top of a hill. Several street vendors were in the park and one of them were selling top ramen! Down the hill there were more street vendors, and a group of guys was singing and dancing at a corner of the park.

People was enjoying and relaxing Saturday of Christmas Eve. In contrast, a little boy was sitting on a pile of trash and digging for food outside of the park.

Later afternoon, we headed to a taxi brouss terminal to buy a ticket to Morondava. We took a taxi to the terminal. The streets to the terminal were crowded as usual. Before the taxi stopped in front of the taxi brousse terminal, there were people coming and trying to sell us bus tickets through the car windows. Perhaps it was Christmas Eve, there were lots of people at the terminal so it was a bit messy. There were also a few military officers trying to organize the traffic. We asked the bus companies one by one to find a bus to Morondova with an acceptable price. Unfortunately most tickets were sold for holiday and the available tickets were relatively expensive. Thus we decided to come back the next day. 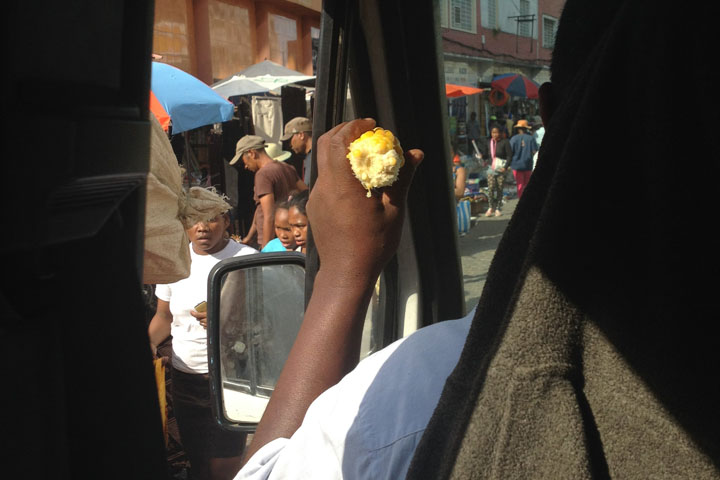 Corn bought by driver of bus

On the way back, we took a walk and also looked for local bus (#140) which could take us back to the downtown. We walked for about 15 minutes to a bus stop and got on the bus. There was a bus attendant standing near the door to collect fees and helping passengers with bags when needed. Since there were lots of traffic and some drivers were pretty aggressive, many times the bus driver would just leave as soon as the passengers were dropped off, even the attendant was not back to the bus yet. Thus most of the time the back door was half open so easier for the attendant to run and jump back on to the bus. Through our ride, the driver and the attendant worked together as a team really well. The traffic was not good, especially when the bus passing by a local market. Because the speed was really slow to pass by the market, the bus driver bought a corn from a street vendor while moving, just like going through a drive-thru. 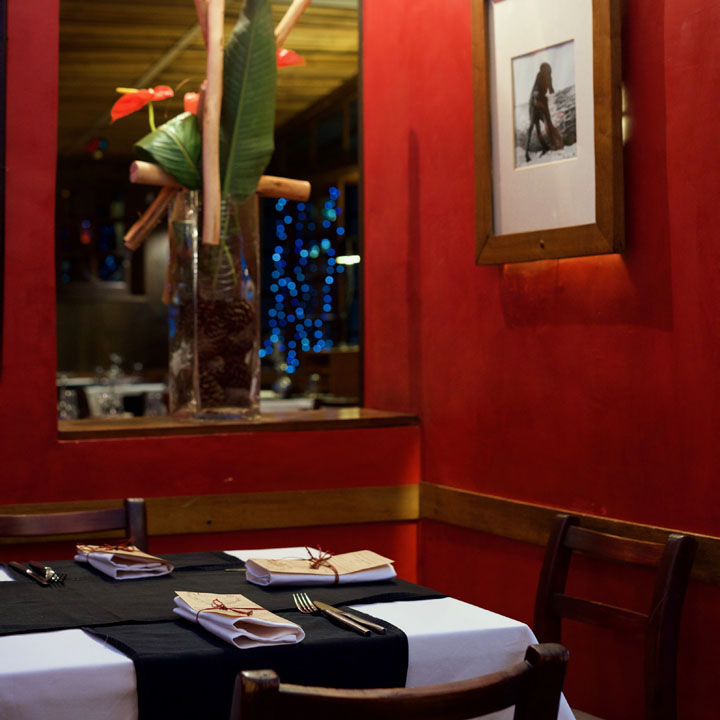 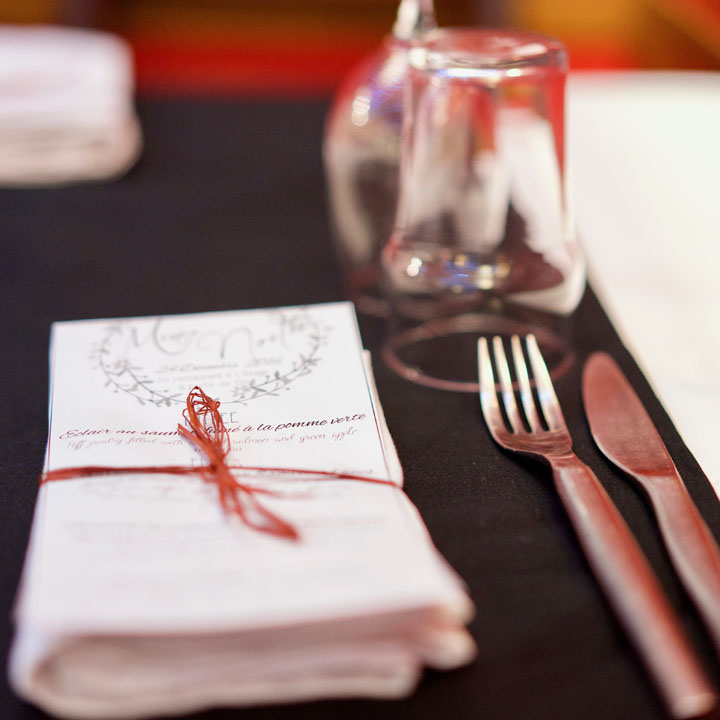 For dinner, we went back to SAKAMANGA as a Christmas dinner. The restaurant offered a special menu of meals and deserts for the holiday. With the inexpensive prices in Madagascar, we ordered a full course of dinner from appetizers to deserts. The atmosphere and food we had at the night made us forgot that we were in Africa. 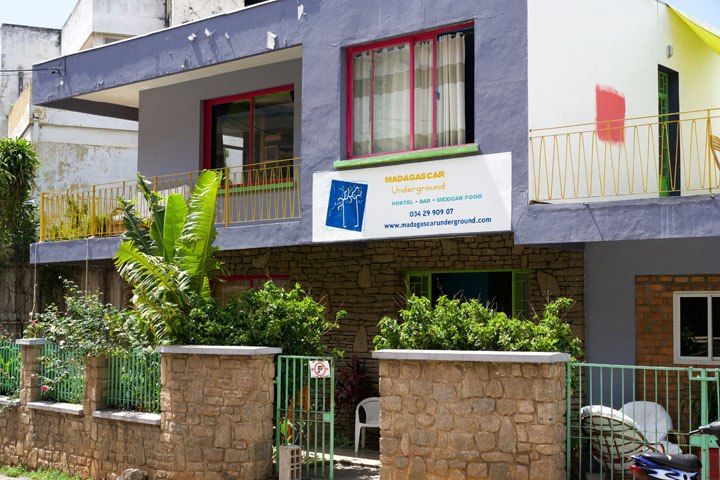 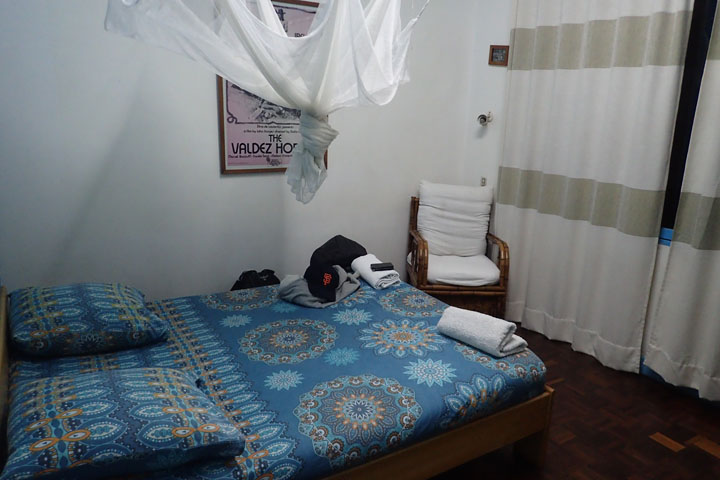 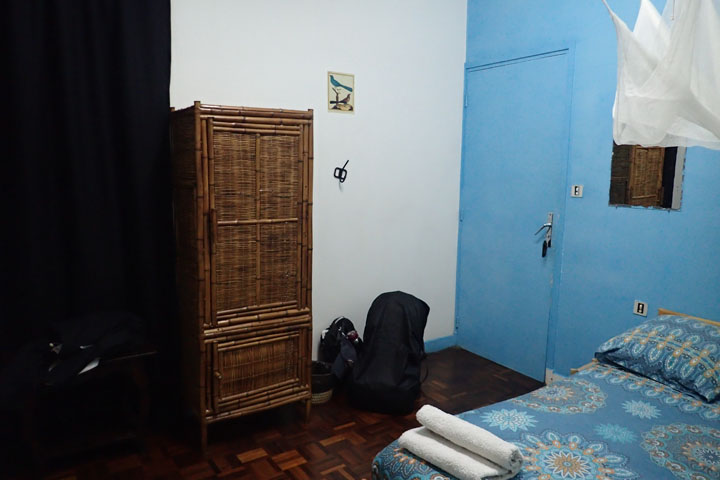 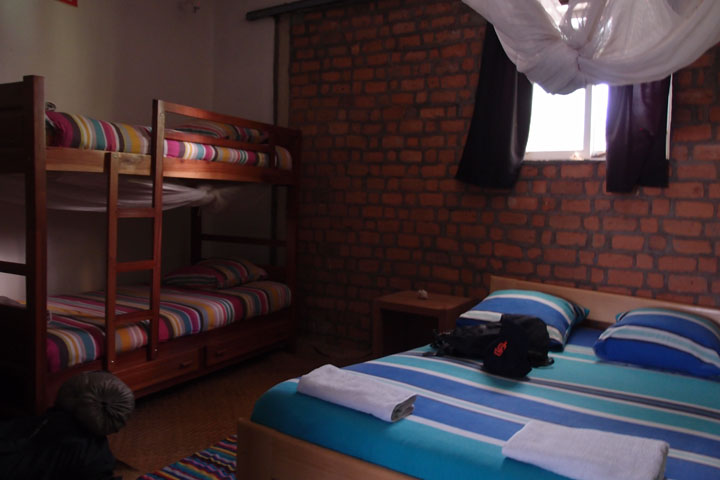 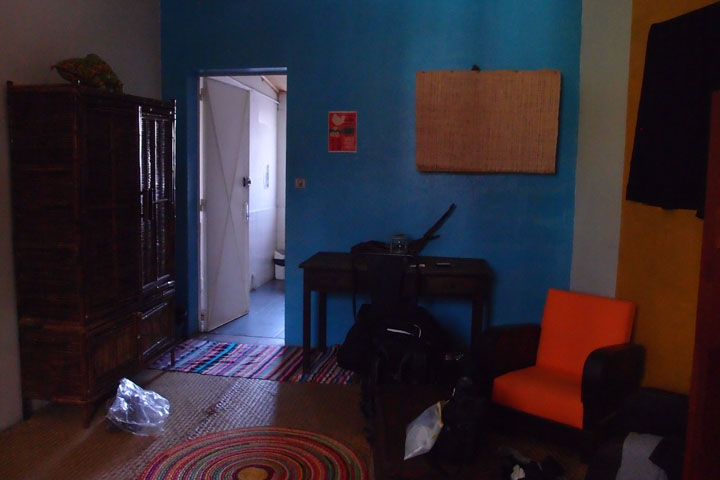 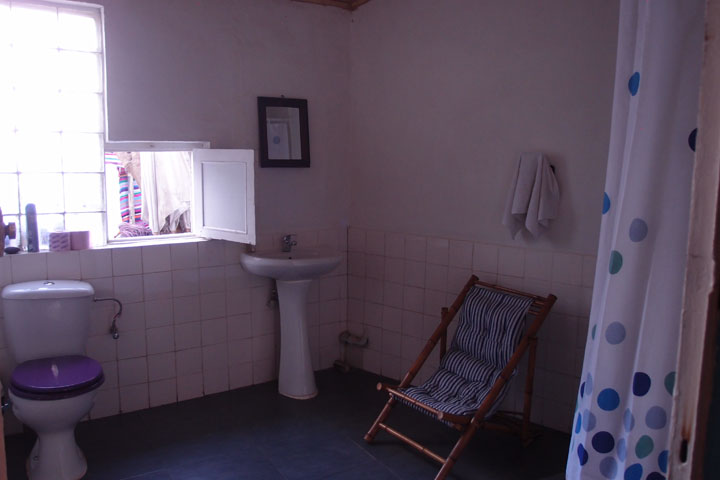 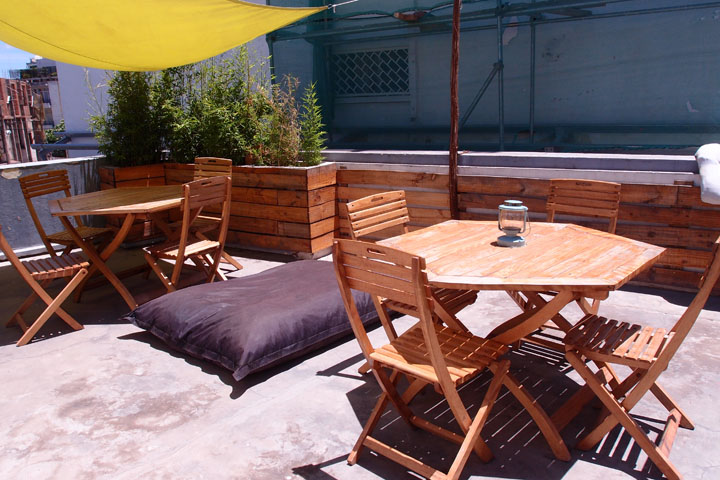 Check-out: 11am. Luggage storage is available at the hostel reception.

WiFi: Yes, but not stable and only available near the reception. We could not get any signal when we stayed in the room on the second floor.

Amenities: No. Towels were available for rent.

Meal: Not included. Beverages and some quick food were available for sale but more expensive. Several restaurants were within 5 to 15-minute walk.

It was a 2-level building in an alley. On the first floor, it had a public common area with the reception. Behind the reception there were some more common spaces. On the second floor, there was an outdoor seating area. There were also 3 shared bathrooms and 3 showers, relatively clean. Laundry services were also available.

We stayed at this hostel for 2 nights. The first night was a private room on the second floor with a window facing the alley. Although there was a window, the room was still stuffy. The room had a double bed, a shelf, a small table and a big chair but no private bathroom. Two outlets were also available in the room. The second night was a family room on the first floor with a private bathroom. There was a front window in the room and a back window in the bath room so a bit more comfortable. The family room was fairly big, with a double bed, a bunk bed, a shelf, a set of desk and chair, two sofas and a private bathroom.

Overall the building and rooms we stayed were pretty clean. The staff were also helpful answering questions. The hostel and neighbors were safe but it was better not to walk around alone after dark. Also they suggested us not walking up the hills or taking stairs at night time for safety reason.

After we came back from Morondava, we came back to this hostel and stayed in the dorms for one night. There was one dorm room for men and the other for women. Both were on the second floor. 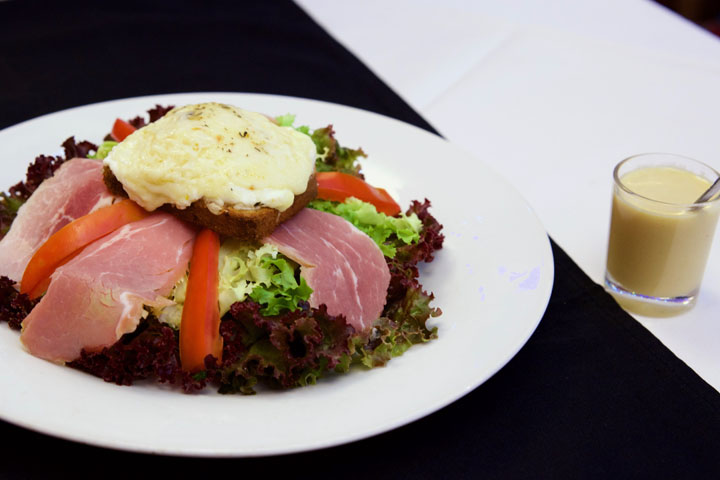 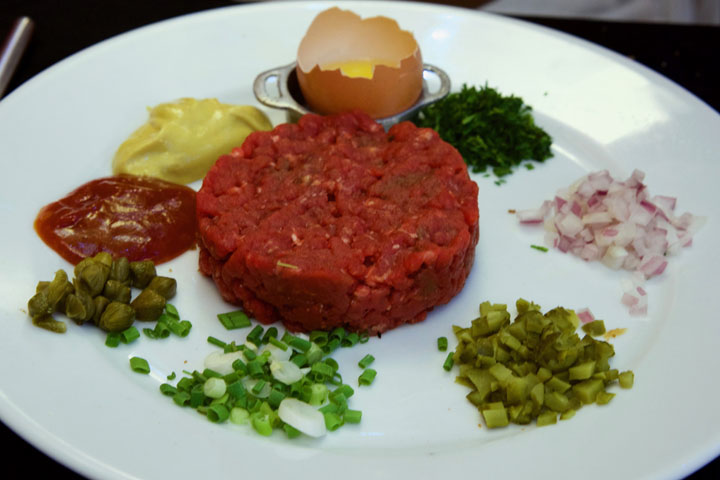 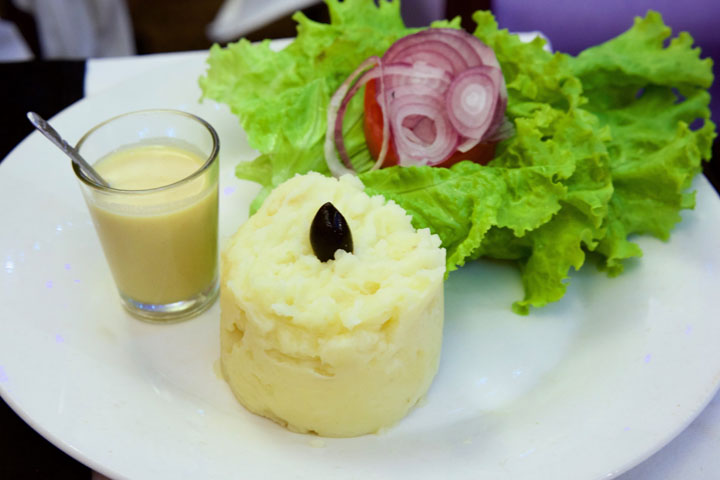 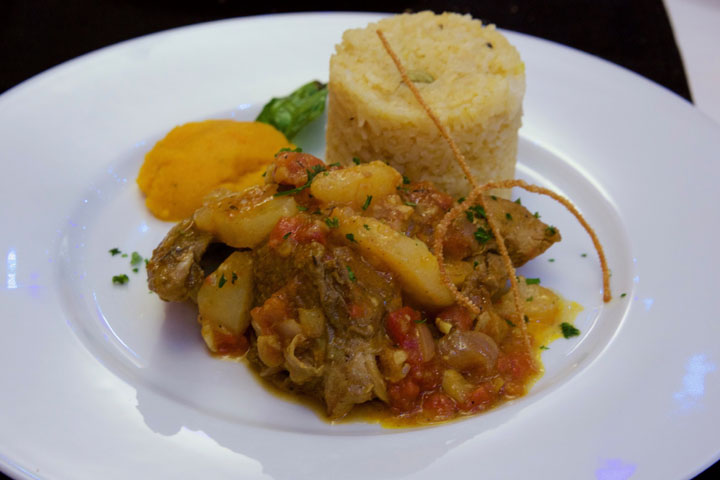 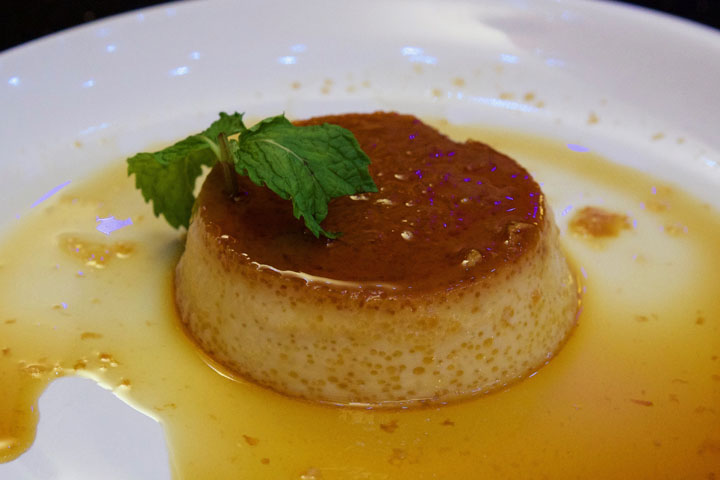 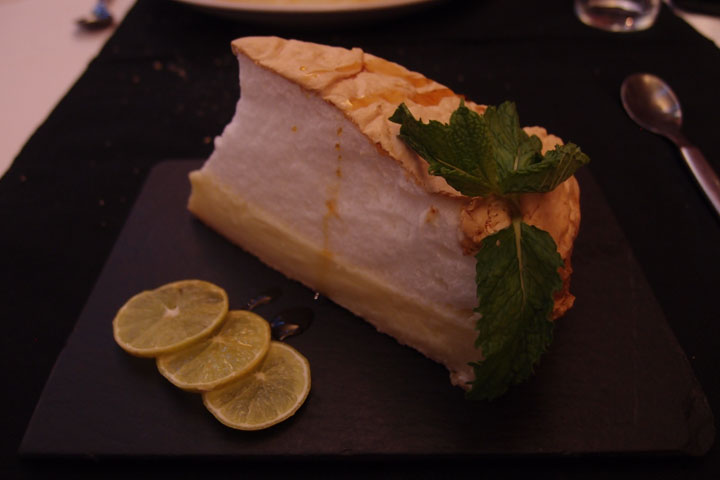 The restaurant was less than 10-minute walk from Madagascar Underground Hostel. This restaurant was clean, well designed and decorated, similar with those in SOHO in New York City. 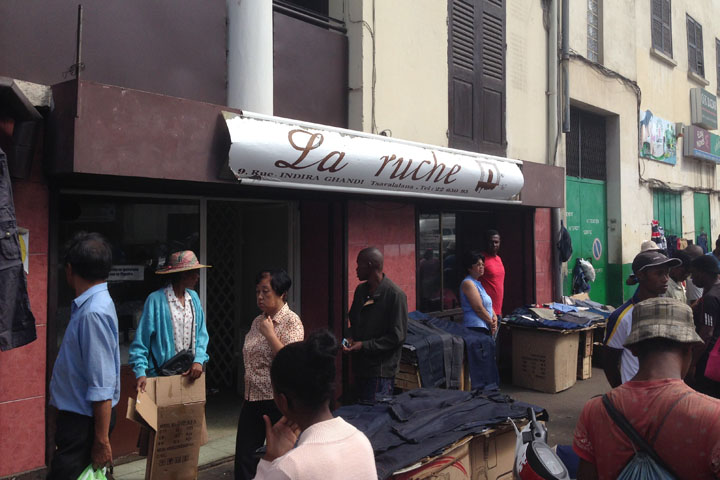 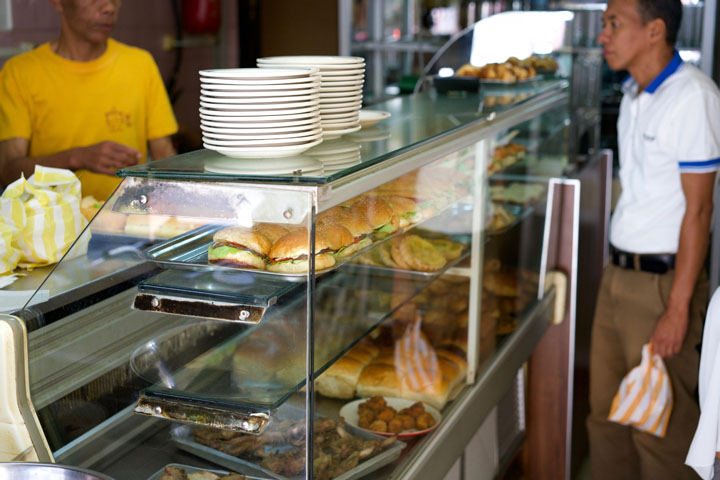 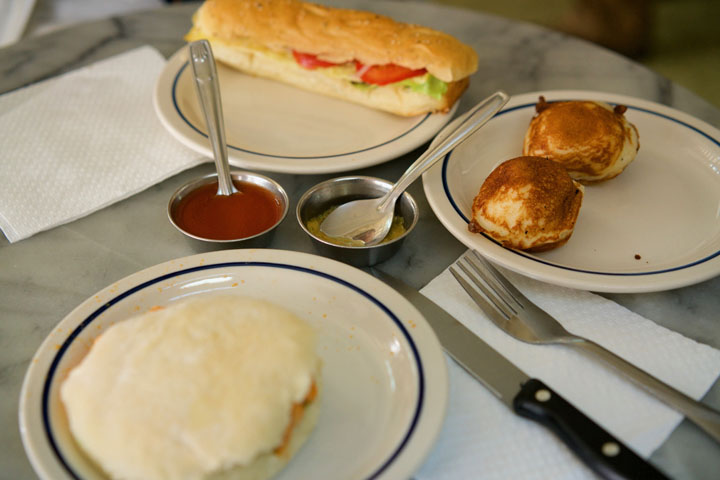 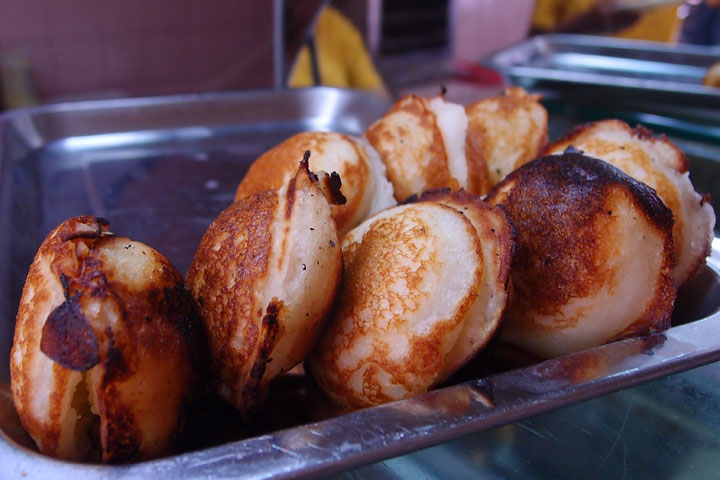 This restaurant was about 10-minute walk from Madagascar Underground Hostel. It was more like a local cafe, providing various kinds of sandwiches, pastries and beverages.

Lots of local people came here from morning. The food was good although there were still some flies around. We ordered 3 pastries for 6,900 MGA. 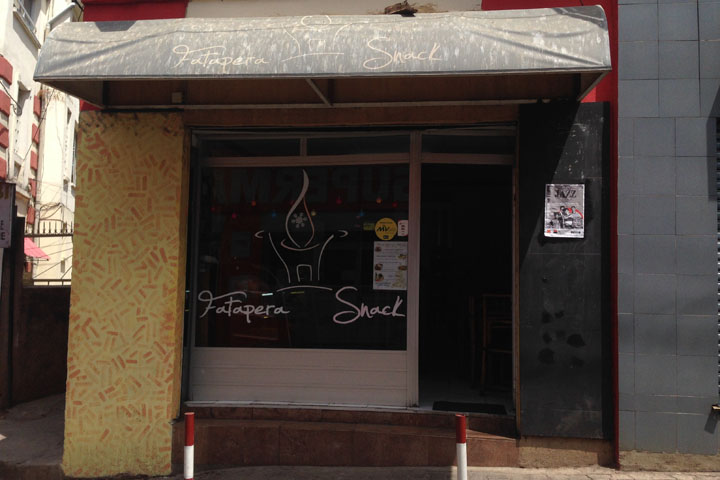 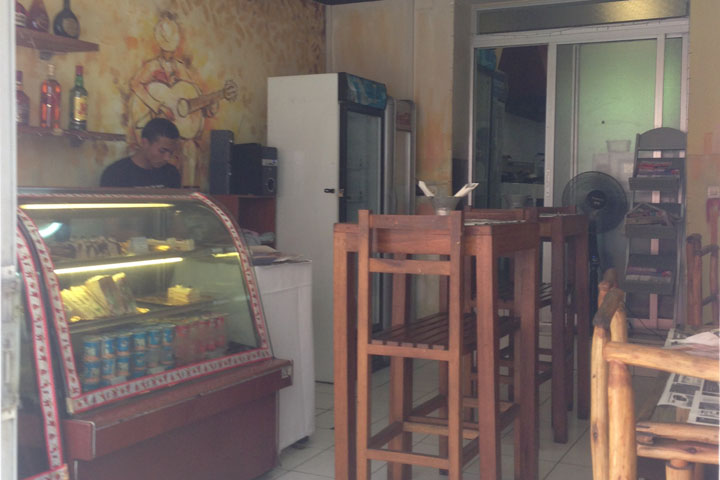 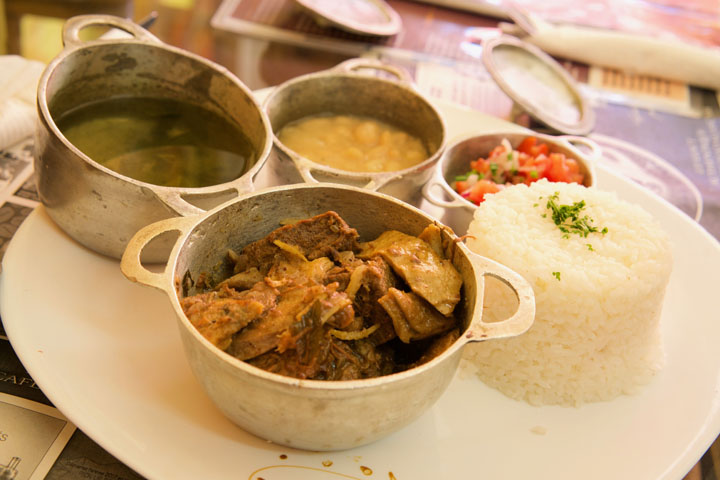 This restaurant was about 20-minute walk from Madagascar Underground Hostel. It had a few table and looked clean in general. We shared a plate of beef stew, and it was very tasty. It costed 15,000 MGA.

We purchased a soda from a street vendor. It was cheaper if the drink was finished at the stand as a glass bottle was returned to the vendor (1,000 MGA vs 700 MGA).

A few taxis gathering down the hill from Madagascar Underground Hostel, about 2-minute walk. A taxi costed 12,000 MGA from the hostel to the taxi brouss terminal at Fasan’ny Karana. The ride was about 15 minutes.

The driver Initially asked for 30,000 MGA and then decreased to 12,000 MGA after negotiation. We suggest negotiating and finalizing the price before you get into the car.

Most companies listed destinations on a board with prices. The bus terminal was not clean, with litters everywhere and some areas were very smelly.

One ATM was available right across the street from Madagascar Underground Hostel, and we used this one the most. Down the hill there was another one with security guards.

The hostel staff told us not to walk up the hill along the lane after sunset. In addition, the owner of the local cafe La Ruche noted to us to be cautious of pickpocket in the market. The taxi driver also reminded us to hide our cameras even when we were in the car to avoid robbery. However, we had never experienced or faced to any danger while in Antananarivo.