We left from the Madagascar Underground hostel around 12pm, and the shuttle driver was the same person who drove us to the hostel when we arrived at Madagascar the first day. Just like the first time we met him, he asked us for money and food. As the shuttle drove down the hill and got into the crowded downtown, it slowed down and we started seeing kids asking for food and money through the car windows. Before we got out of the shuttle, the driver asked for our water bottle as a souvenir.

We checked in our luggage quickly and went upstairs to grab some food. We didn’t know the credit card machine was not working and we were short of cash for 3,500 MGA when paying for our food. However the minimum for ATM withdrawal at the airport was 5,000 MGA and the only one US Dollar bill we had could only be exchanged for 1,500 MGA at the foreign exchange in the airport. As we had to go boarding, we explained to the restaurant staff and they were fine just taking the dollar bill.

We boarded around 3:20pm and arrived at Nairobi, Kenya around 7pm. Part of the terminal was under renovation. We stopped by 3 airport lounges and stayed overnight at one of them to wait for our flight to Dar es Salaam, Tanzania next morning. As it was late night on New Year’s Eve, there were not a lot of people at the airport and the lounges.

On January 1, we woke up at 5am to take shower and grab breakfast in the lounge before heading to catch our 6:50am flight.

We arrived at Dar es Salaam airport around 8:30am. After getting out of the airplane, we were directed to the immigration counters. There were three counters checking the passports and two counters for visa applications. As we did not have much cash, one of the officers was very kind and took us to an ATM outside of the visa counter so that we could pay the visa application fees.

After getting the visa and picking up our backpacks, we inquired one of the tour companies outside of the airport for information about Kilimanjaro tour and took a cab to the Protea Hotel. Most of the roads around the airport were broad and well paved. We checked in at the hotel quickly, had the welcome snacks and then headed out to find the transportation to Moshi.

Thanks to the hotel receptionist, we were able to go to the ticket office using public transportation. On our way to the Kilimanjaro Express bus company to buy the tickets to Moshi, we also got a look at the city of Dar es Salaam. Most of the routes were paved roads and there were lots of cars. The express bus terminal and stops were built in the middle of the main roads, with designated lanes. Then the lanes next to them were for all other cars, including city buses, passenger cars, motorbikes, auto tricycles and bicycles. On each side of the roads were sidewalks and some business and residential buildings. Overall the public transportation in the downtown area seemed well developed.

We purchased the bus tickets to Moshi from Kilimanjaro Express ticket office and had lunch at the restaurant on the second floor of the ticket office. Then we took the express bus back to the Morocco terminal. We waited for the city bus for a while but none of those stopping by went to our hotel so we just took a walk back to the hotel. Part of the sidewalks were not paved but was not a problem for walking.  Our long-distance bus to Moshi would depart early morning so we just took rest after getting back to the hotel.

The staff at the hostel made a phone call for us and the shuttle came around 12pm as requested. For additional information about the airport shuttle, refer to post Moving to Antananarivo, Madagascar.

From Antananarivo, Madagascar to Nairobi, Kenya 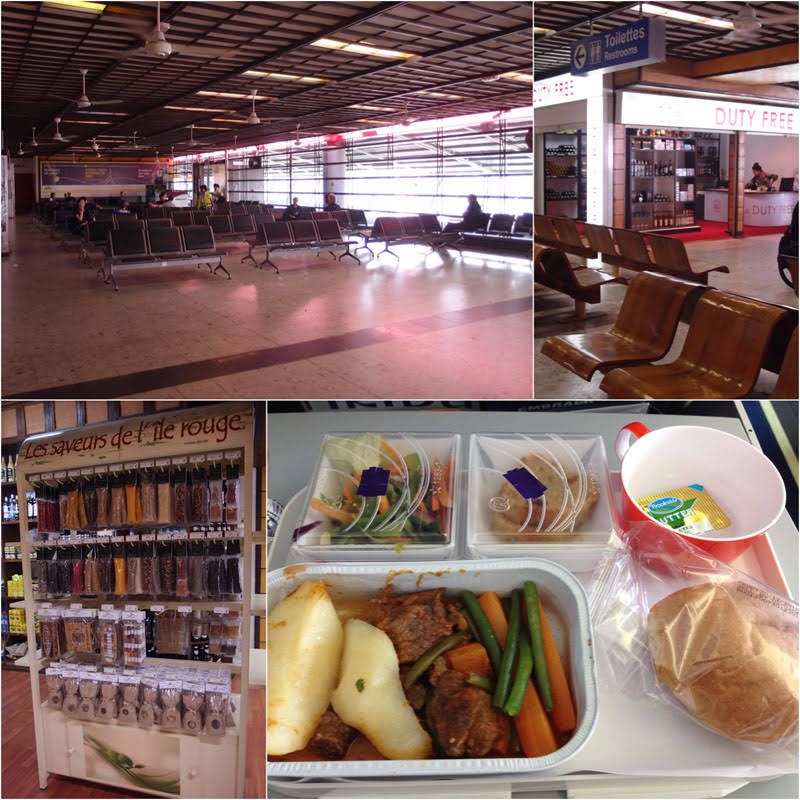 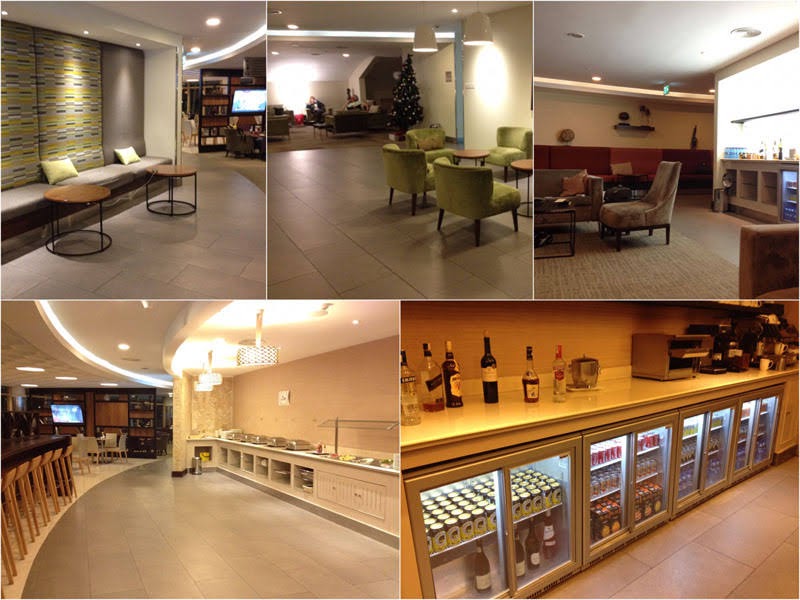 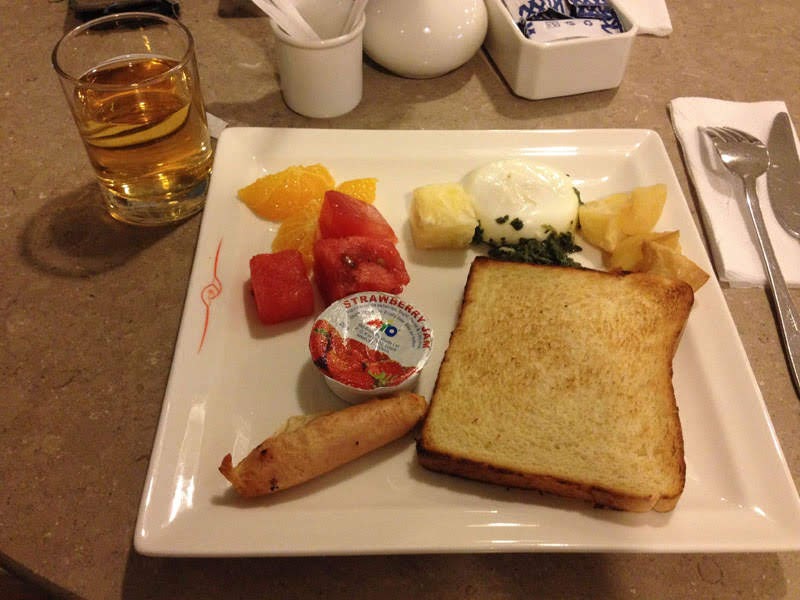 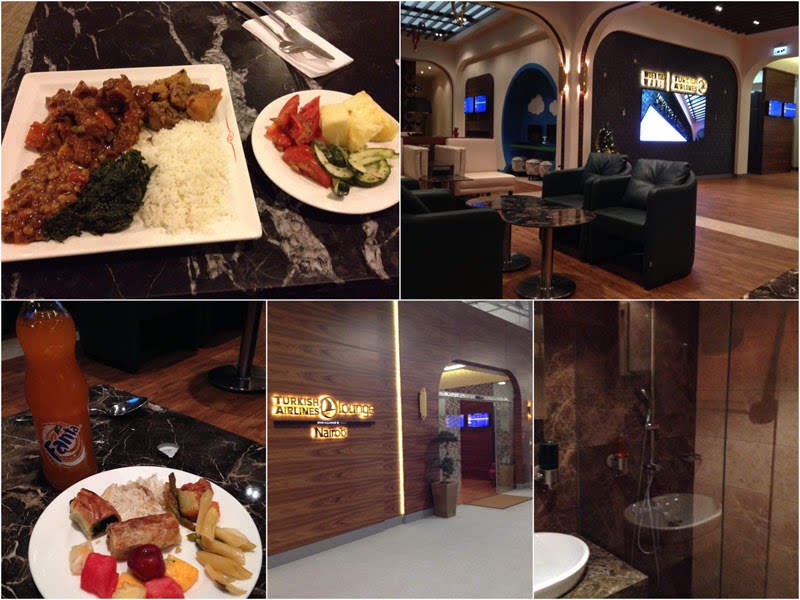 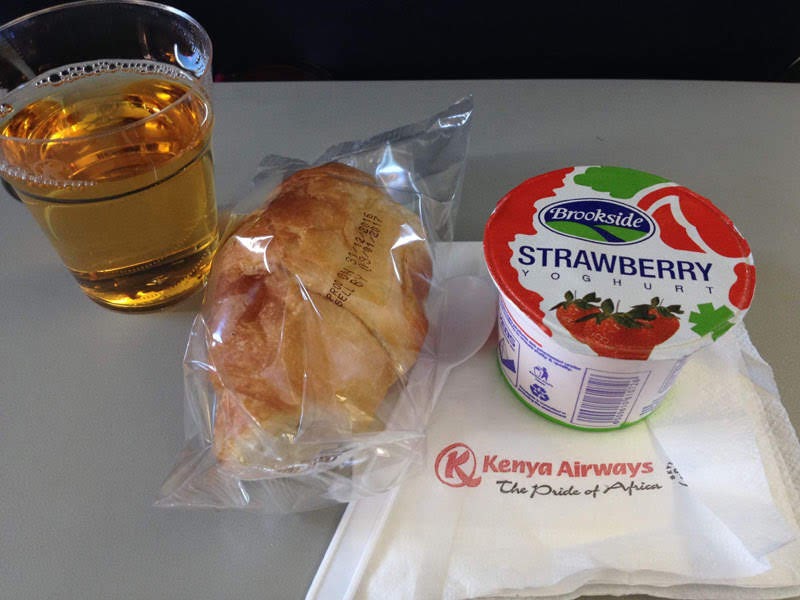 Fees for Visa on Arrival: See picture below 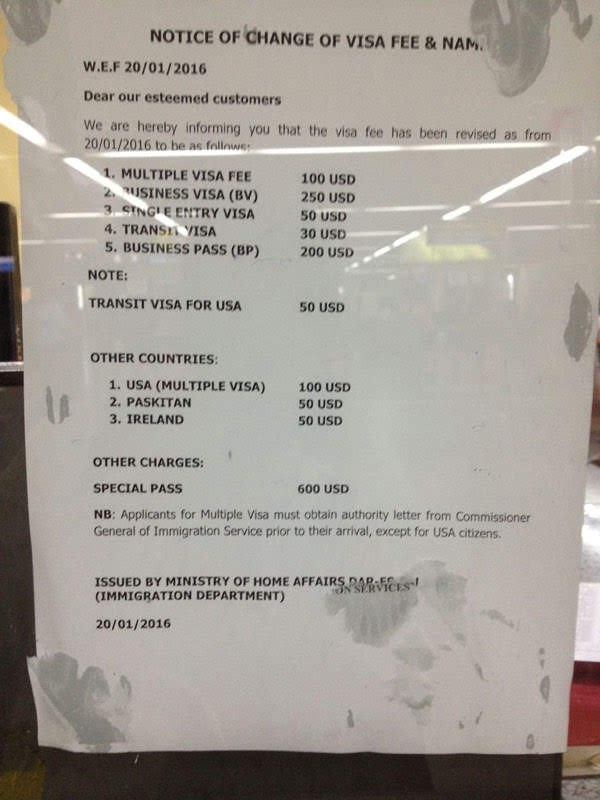 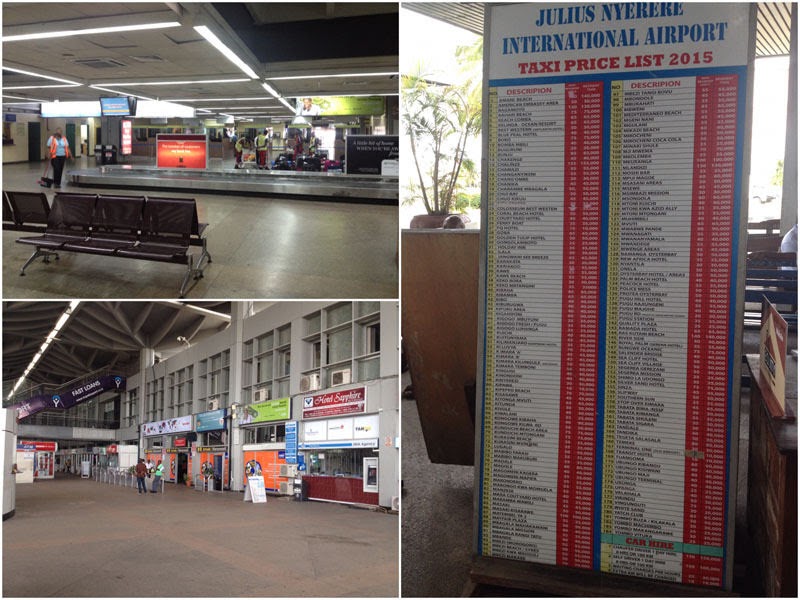 Outside of the airports, there were a few tour companies providing tour information. Taxis were also available, with a chart showing the rates at the taxi booth. The rates for foreigners were much higher than those for the domestic people.

Based on the rate table at the taxi booth right outside of the airport, it would cost 80,000TZS for two persons. As the hotel shuttle would only cost 25USD per person, we negotiated with a few drivers and one of them sent us to the hotel for 50,000TZS.

Thanks to the hotel receptionist, we were able to get to the Kilimanjaro Express ticket office using public transportation. Based on the instructions from the receptionist, we walked to the local city bus stop (Palm Beach stop, about 10-minute walk from the hotel), took the local bus to Morocco (express bus terminal), and then transferred to the express bus to Shekilango stop.

It was a mini bus. The major stops were marked on each bus. A person standing at the door was in charge of collecting fees.

Express bus from Morocco to Shekilango 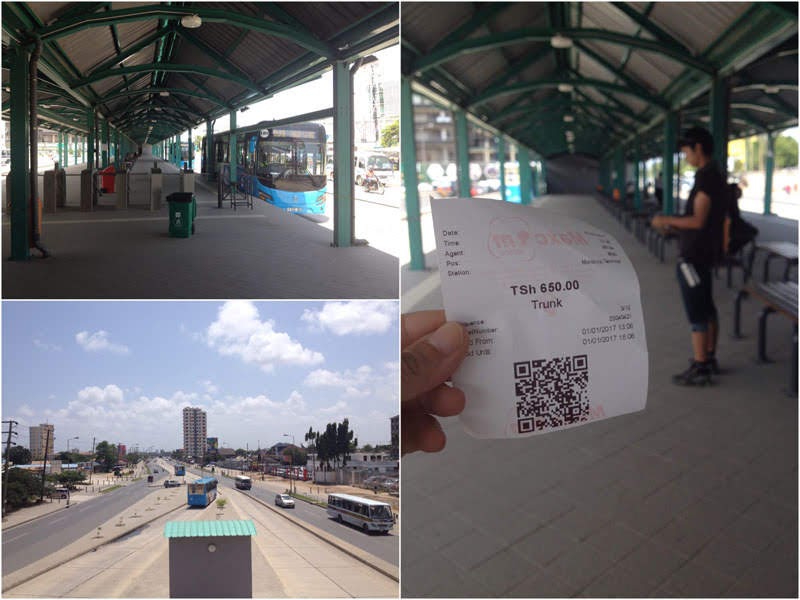 Shekilango was the closest stop to Kilimanjaro Express bus company. There were designated lanes and bus stations for the express buses, so they were separated from all other cars. Tickets were available at the bus terminal. The tickets should be kept throughout the ride.

The bus was large and modern. However, as there was no A/C and it was very packed, it got very hot and stuffy.

Note that taxis and auto tricycles were also available on the streets. We did not use the tricycles during our stay in Dar es Salaam. Refer to Moving to Moshi (Kilimanjaro), Tanzania for further information about taxis.

For information about Kilimanjaro Bus, also refer to Moving to Moshi (Kilimanjaro), Tanzania. 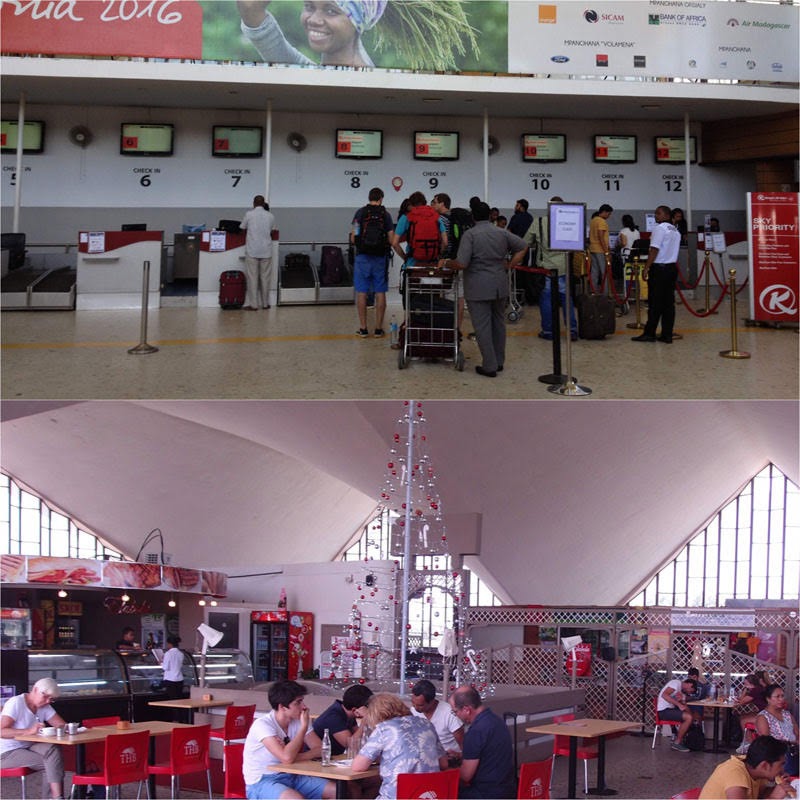 A restaurant serving light food and drinks was located on the second floor at the international terminal. No A/C but the view was nice, with the whole scene of the runway. We shared a pastry and strawberry milk, which tasted interesting, cost 5,100 MGA in total. 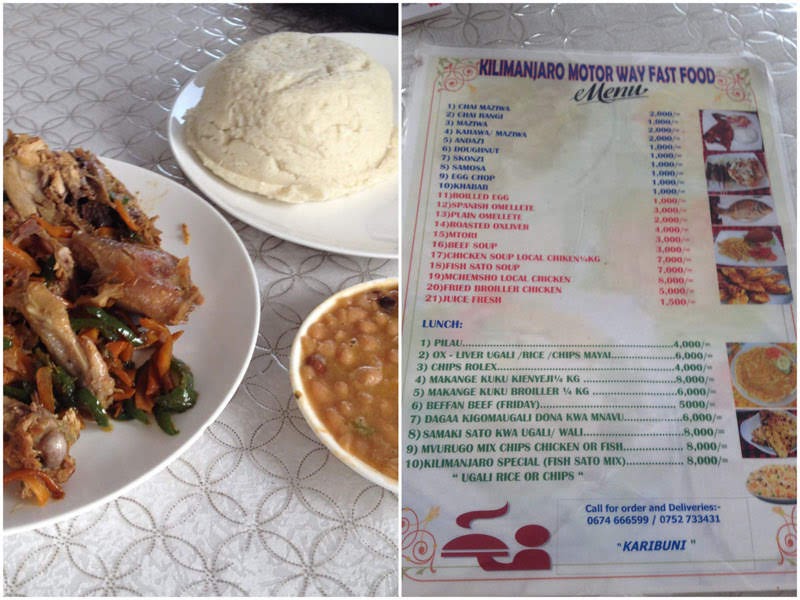 The restaurant was located on the second floor of the ticket office. A menu with prices was provided. We ordered 2 dishes of 1/4 chicken for 16,000 TZS, tasted fairly good. There was a convenience store across the street, selling packed snacks and drinks. 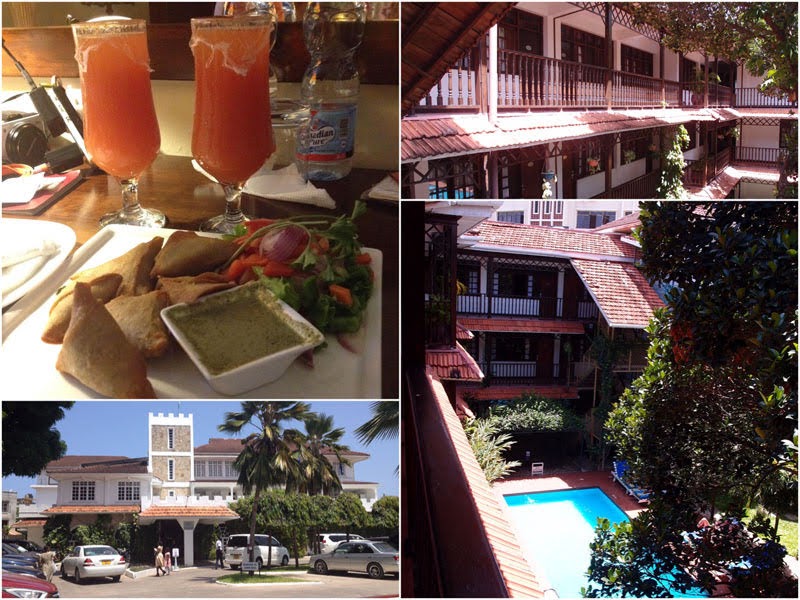 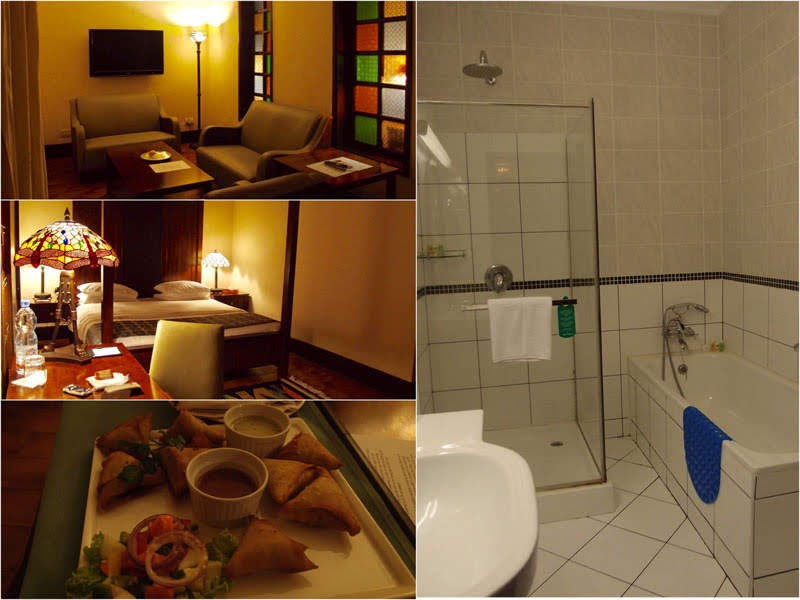 WiFi: Yes, available in the room

Meal: Not included. A restaurant was located within the hotel, providing breakfast, lunch and dinner. Refer to post From Arusha to Dar es Salaam for further details.

This is a 3-star hotel. An outdoor swimming pool was surrounded by the hotel rooms. The hotel also provided free storage for luggage (we left one of our large backpacks when going to Zanzibar). The room we stayed was very clean and comfy. Due to our hotel membership, we got hot food and mixed juice (watermelon, pineapple and passion fruits) as welcome snacks.

The service quality from the front desk varied. The first day when we arrived, the receptionist was very friendly and provided lots of information regarding our travel plan. During our second stay though, a different receptionist was not nice, unable to answer any of our questions and her way of talking always came with strong attitude.

Moving from Antananarivo to Morondava

Moving from Antananrivo to Morondava On December 25, we packed our luggage and checked out from Madagascar Underground ...
2016.12.25

There are the three greatest water falls in the world: Niagara, Iguazu, and Victoria. We had visited Niagara previously ...
2016.12.12
Home
All Trips
2016 Dec: RTW Trip