After getting our coin necklaces in Stone Town, we started our search for a dala dala to Nungwi. Luckily with the help from a manager at a hotel, we found the dala dala terminal pretty quickly. Not many people taking the same bus so it was quite empty when we left Stone Town but it got full very soon. After all the seats were taken, the dala dala stopped at a village and picked up a few women and their kids. Although it was very tight, the passengers were generally nice and made room for the ladies, while the kids could only stand in the tiny space in the middle. Along the way we passed by some local stores and a few villages. 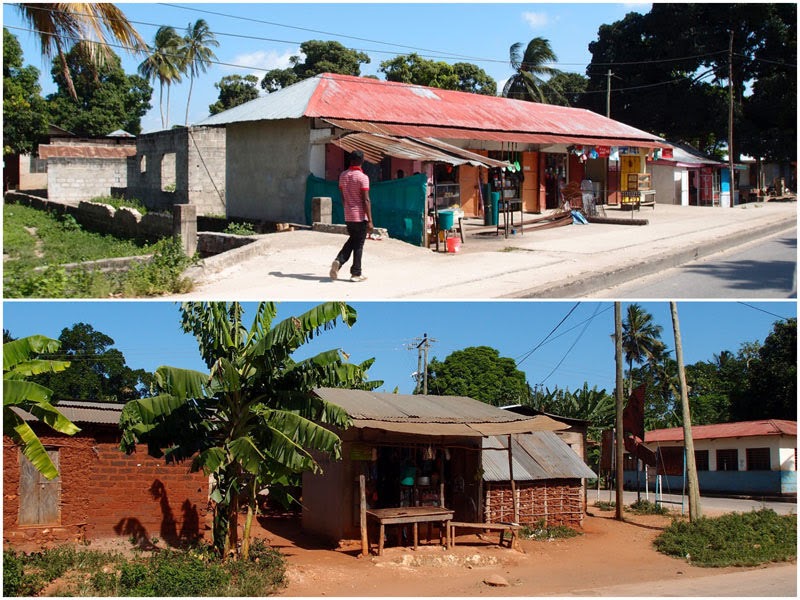 It was not a very comfy ride but was not long either. We arrived at Nungwi around 4:15pm and a guy from Travelers’ Lodge just approached us. Since we did not have any reservation, we just followed him to the lodge and decided to stay here for the night after negotiating the price with host.

After dropping off our luggage in the room, we went to a small deli for a quick bite then followed the same guy to a tour company and a dive center on the beach, and signed up for diving next morning. While the beach was surrounded by villas, fancy restaurants and souvenir shops, local kids were also playing around, so at least the beach did not seem restricted to private/ commercial use due to tourism. 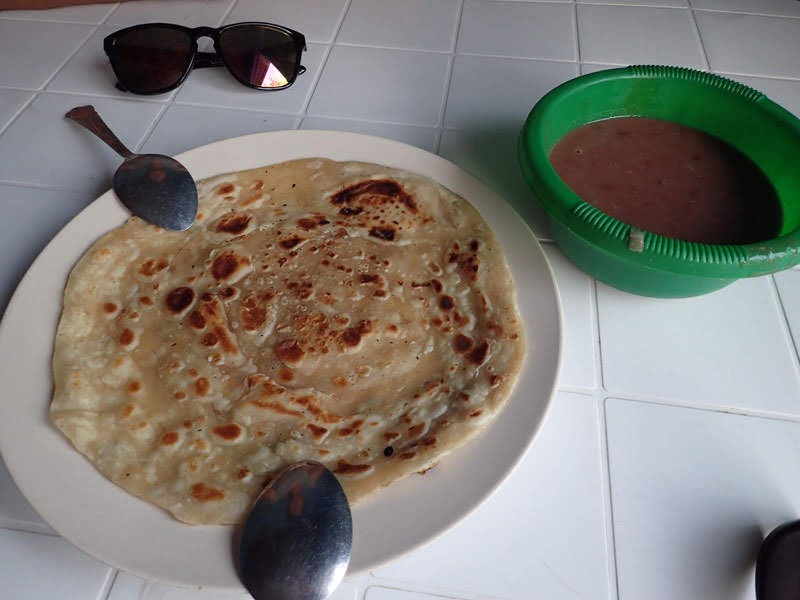 We spent some time walking on the beach to enjoy the sunset view, and then had delicious dinner at Mama Africa Restaurant before heading back to the lodge for shower and sleep. 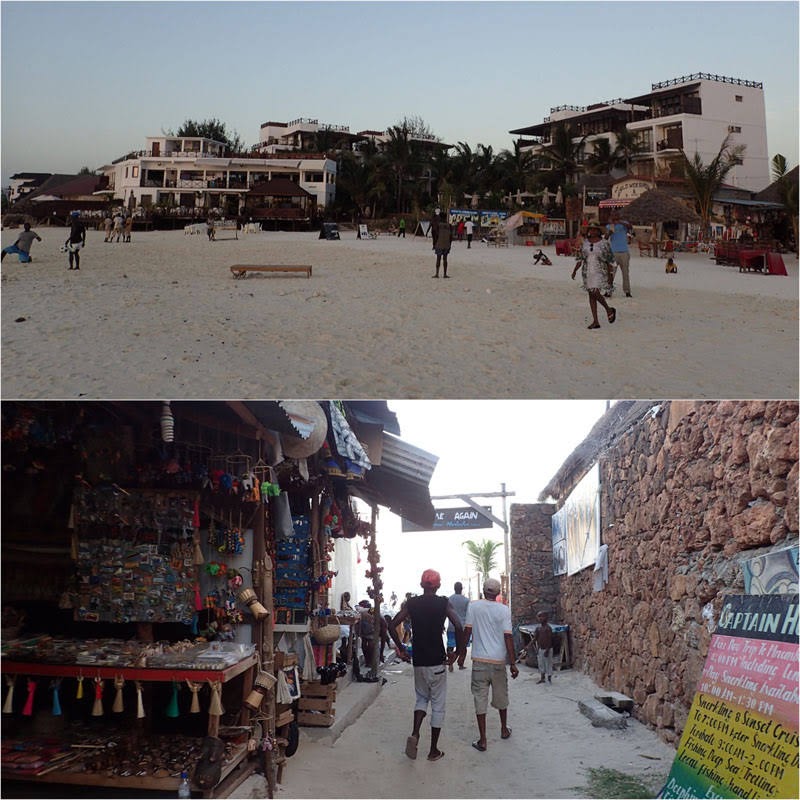 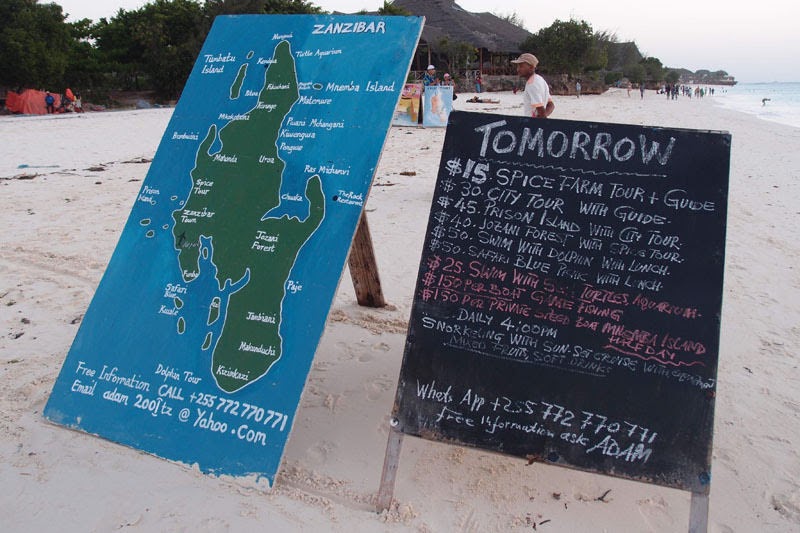 Next day, our very first dive in Africa.

After having breakfast at Mama Africa Restaurant, we went straight to the dive center on the beach for our very first dive in Africa.

The water was crystal-clear but the visibility was not great due to the sands. While there were nothing big that excited us, many different kinds of tropical fish were observable.

It got a bit chilly on the way back during the boat ride (especially with the winds) so we lay down on the boat bow to warm up our bodies from the sun (make sure to use a big towel to cover skins to prevent any sunburn). Before heading back to the hostel, we also took a hot shower at the dive center.

After pick up our luggage from the hostel, we followed the same guy (who took us to this hostel the day before) to the dala dala terminal. Thanks to him, we were able to sit next to a driver on the dala dala going back to Stone Town. In contrast to the way to Nungwi, this ride was much more comfortable. 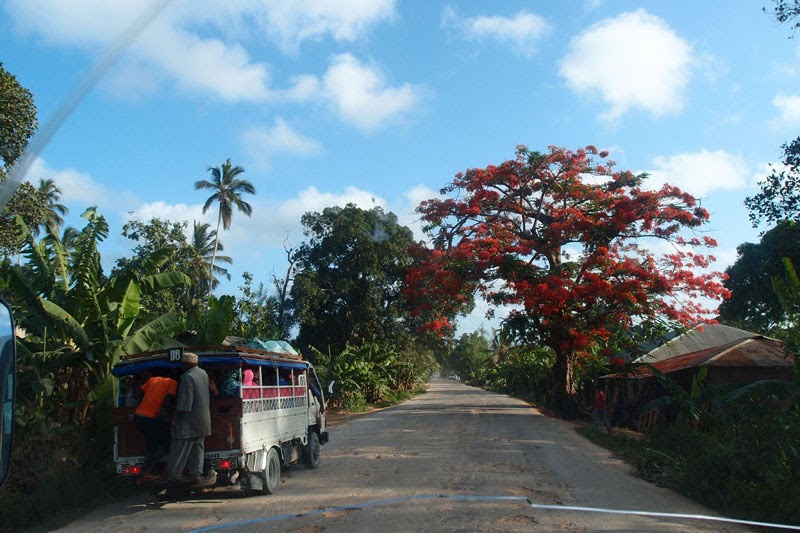 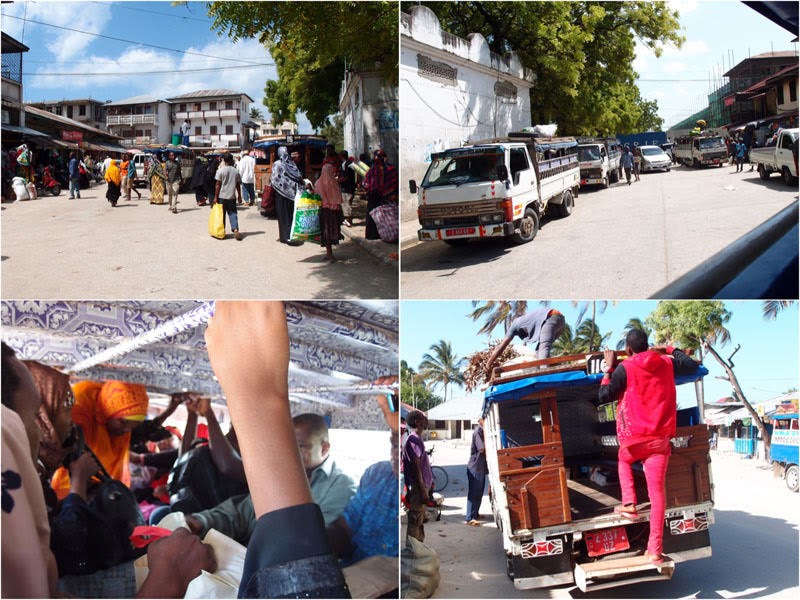 From Stone Town to Nungwi

There were many different routes. The route number and destination were noted on the top of each bus. The buses were actually renovated pickup trucks. A roof were installed with long benches underneath as passenger seats. Large bags and luggage were tied up on the roof.

The bus stopped wherever a passenger needed to get on or off. There was an in-charge person either sitting or standing close to the entrance/ exit to collect fares. Since Stone Town was the first stop, the person asked the passengers to get into the bus first and then started collecting fares while he tried to walk around to get more passengers. Based on our search before the trip, some travelers got into a situation that after they sat into the bus and paid the fares, another person came to collect fares again since the first person was actually an imposter. This did not occur to us but it would be good to be cautious.

This route was mostly paved roads, only one section got a bit bumpy. The in-charge person tried to squeeze in as many people as possible so it got very tight. The bus drove through various villages and also made a quick stop near a few street food stands. Since it was very tight and difficult to get off the bus, the street vendors came over to the bus and some passengers bought grilled corns.

From Nungwi to Stone Town

There were multiple buses at the stop but was not hard to find the one(s) to Stone Town if asking around. The drop-off in Stone Town was the same pick-up location / bus terminal. 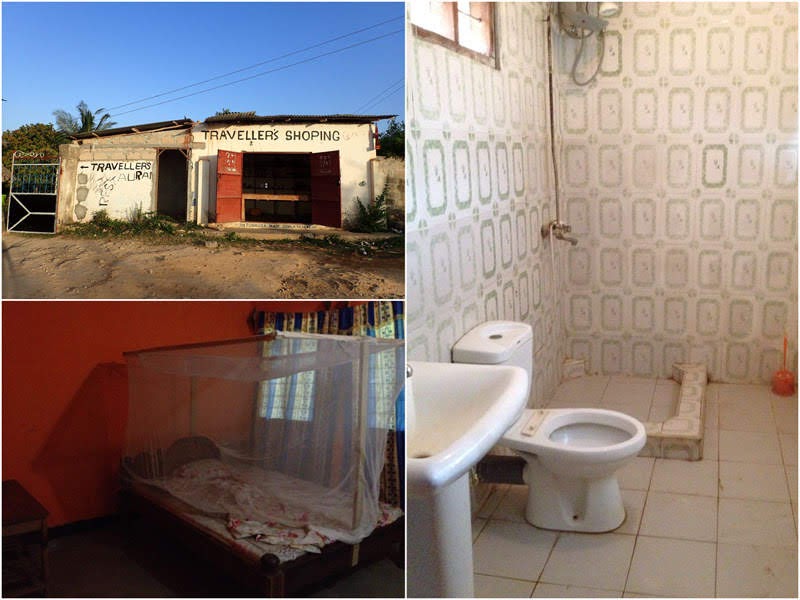 Price: USD $20 / per night for a double bed room with private bathroom

Check-out: Not specified, can be discussed with the host

Someone from the lodge approached us when we just got off the local bus from Stone Town. Based on our previous research, some backpackers found a place to stay for 20,000 TZS per night, which was much cheaper than Travelers’ Lodge, but since we planned to stay for just one night and this place was only 3-min walk to the beach/ dive center, we did not keep looking for other places.

While the room was spacious, it was not very clean. Mosquito net was attached to the bed but somehow it did not work, as there were still lots of mosquitoes at night. No hot water (but not a big issue due to the hot weather) and no seat on the toilet. However, the host was generally nice. The guy who took us to the lodge also led us to the tour company and dive center nearby. Some outdoor seating was available in the lodge. 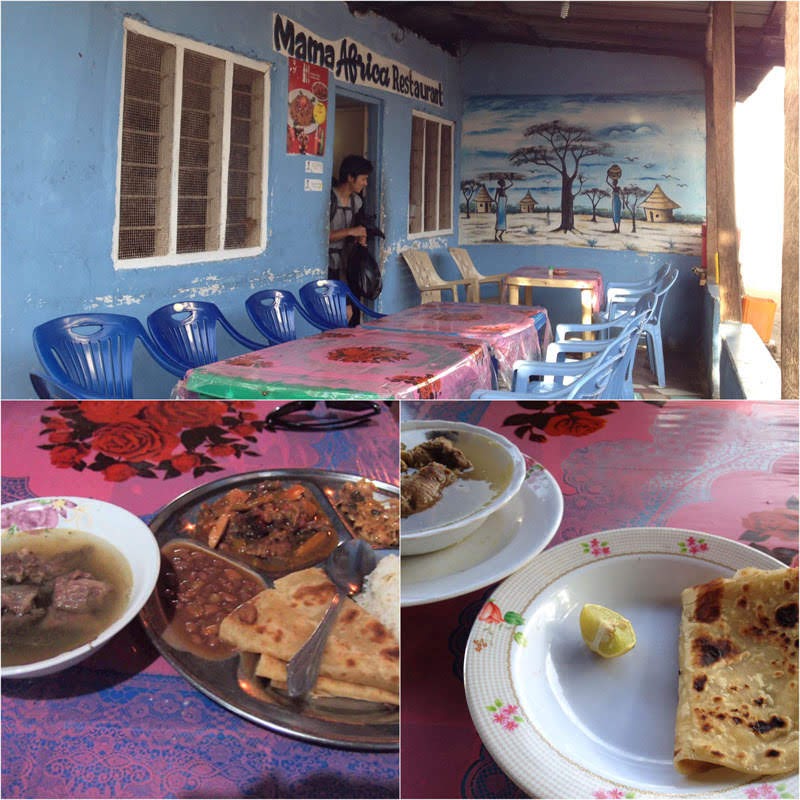 The restaurant was located at a corner on the way from our lodge to the beach. There was no menu but the ingredients were visible in the side kitchen. We shared a plate (including beef stew, veggie, beans, rice and flat bread similar with roti) and beef soup for only 6,000 TZS, and the food was so delicious that we went back again for breakfast next morning. The breakfast was smaller, including the roti and same beef soup for 4,000 TZS. 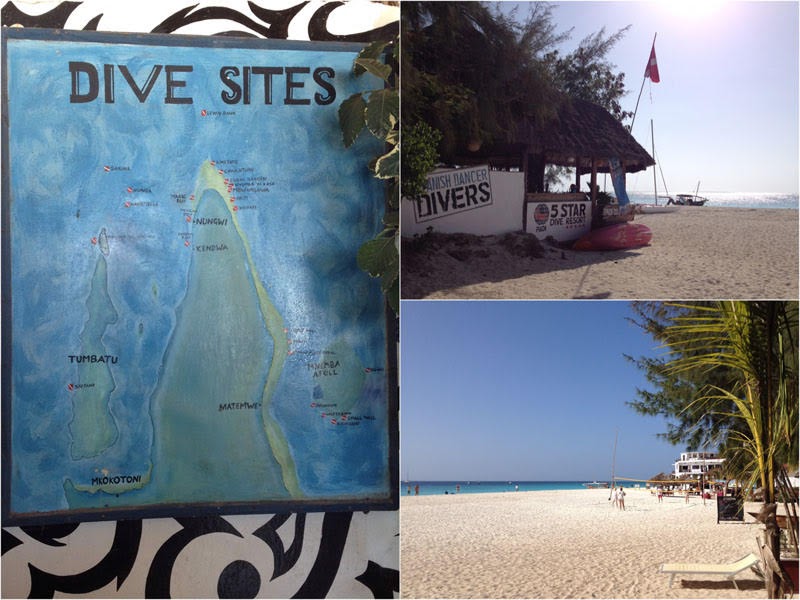 The diving spot selected by the guide for the day was 1-hour+ boat ride from the beach (the $30 charge for the boat ride would not be applicable if the dives were at a closer location). We did not have much cash with us so we decided to pay on card to ensure we kept sufficient cash for food and accommodation.

We brought our diving mask and rented all other equipment. The dive shop appeared well maintained and the staff was helpful. There were about 12 people (excluding guides) in the group, and the tour guides spoke English. The staff carried and loaded all equipment onto the boat for the customers. Toward the end of the second dive, one of our BCDs did not work properly to get the air out and the guide was able to address the issue quickly which was very helpful.  Snacks and fruits were provided during the break and return boat ride.

Shower rooms and toilets were available at the dive center and relatively clean. Hot water available for shower.

No ATM in the village so make sure you get sufficient cash before your visit. Otherwise cash advance was available at a tour company near the beach with a fee.

After visiting the greatest water falls in African continent, we moved to the next country for a safari which was known ...
2016.12.13

Heading to Antananarivo Airport We left from the Madagascar Underground hostel around 12pm, and the shuttle driver was ...
2016.12.31

Gabon, the first African country we landed for our backpacking trip. The trip of rich nature of Africa was just begun. ...
2016.12.03
Home
All Trips
2016 Dec: RTW Trip