From Lope to Port Mole 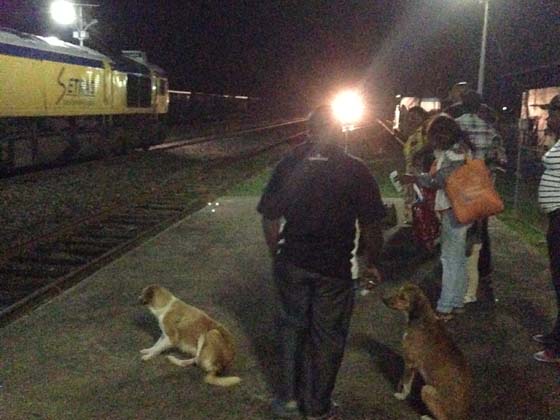 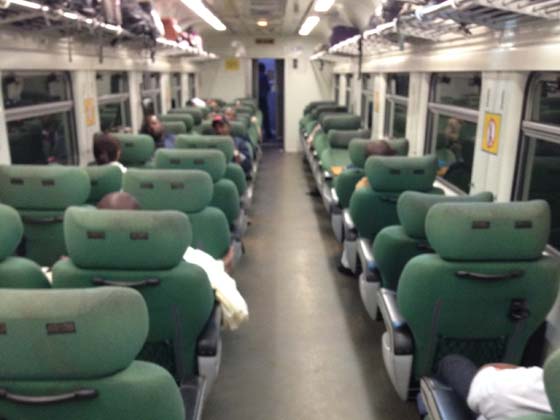 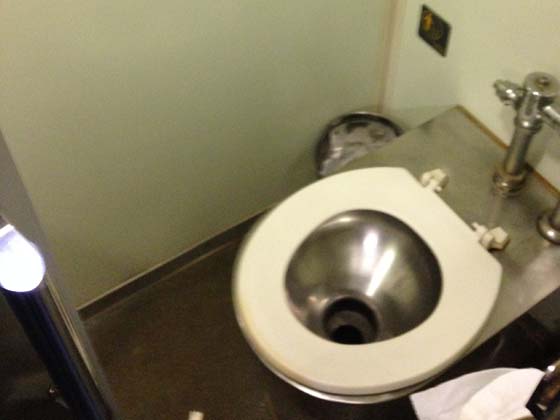 Express train left from Lope station at 1:32am and arrived at Owendo station in Libreville at 7:50am as scheduled without any delay. This time we purchased 1st class seats because of the unpleasant experiences on the way to Lope two days ago. Please see the post “Way to Lope National Park in Gabon” for the train schedule and 2nd class train ride experience.

In the 1st class car, there were 3 seats on each row with a cup holder and a net bag attached to the back of the front seat, similar with a bus seat. A foot pedal, movable foot cushion, adjustable seat back and foldable table were available as well. Although there are some tiny dirt on some of the seats, the ride was comfortable and good to catch up some sleep as the train car was clean, including a clean bathroom (no water for washing hands). The 2nd class cars of the express train we took were also clean. In consideration of budget and cleanness, we recommend taking the 2nd class for Express and 1st class for Omnibus (local train).

At Owendo station, a lot of taxi drivers talked to us once we got out from the station. Since we planned to stop by Lope Hotel satellite office in Libreville to see Evelyne, General Director of Lope Hotel, we negotiated the price for a taxi ride to the satellite office from the station. Please see the post “Way to Lope National Park in Gabon” for the location of the office. The taxi was 5,000XAF for a 30-min ride from the station to the office which was located in the downtown of Libreville. Due to the rush hour in the morning, the traffic was pretty bad and air pollution was severe. We opened the windows because the AC of the taxi was not working. However, the driver informed us to close the windows for our own safety, as sometimes a robber grabbed a passenger’s bag from outside when a taxi ran slowly with its window open. 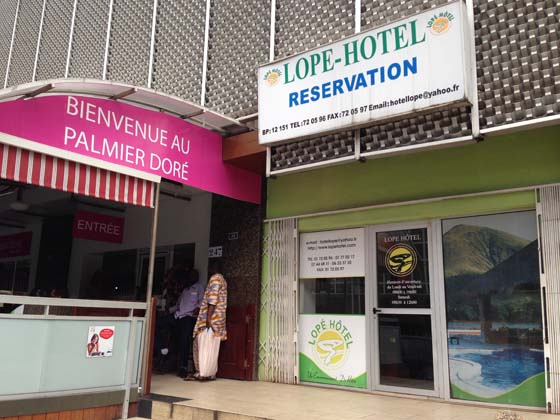 We arrived at the office around 9am and the office was already open. The purpose of visiting this office was to ask the precise location of the ferry port for a ferry to Port-Gentil. Also, we had to get more cash from a bank and food from a grocery store to be ready for a ferry. Evelyne was at the office and she was really kind to show us the locations of the ferry port, banks, and grocery stores. Compared to the empty streets and closed stores last Sunday when we walked around in Libreville, there were a lot of stores open and people walking. Before heading to the ferry port, we had pastries from a bakery next to the Lope Hotel office, Palmier Dore. Evelyne told us that the bakery was pretty famous in Libreville and pastries there were really tasty. Each pastry was around 1,000XAF.

After the breakfast, Evelyne helped us call a taxi from the office to the ferry port, Port Mole. The taxi ride from the office to the port was about 10 min, and we assumed the price was 5,000XAF because both origination and destination were in Libreville without confirming with the taxi driver. However, the driver charged us 8,000XAF. It just reminded us that we should have confirmed the price before getting on any transportation.

From Libreville to Port-Gentil 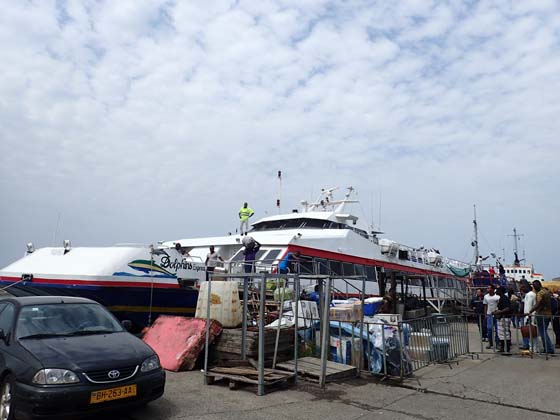 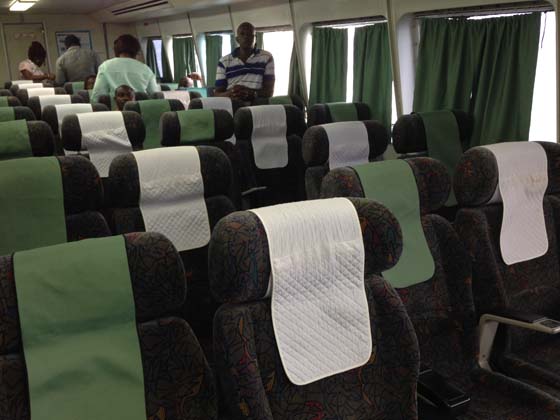 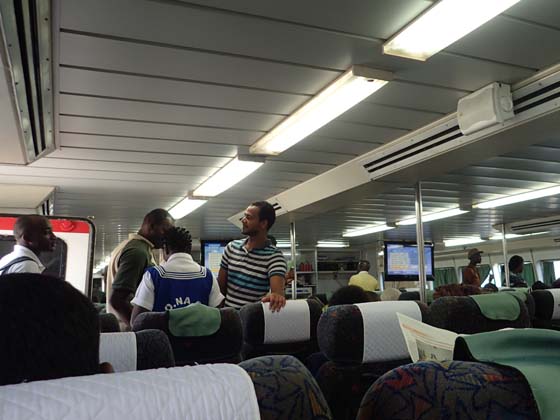 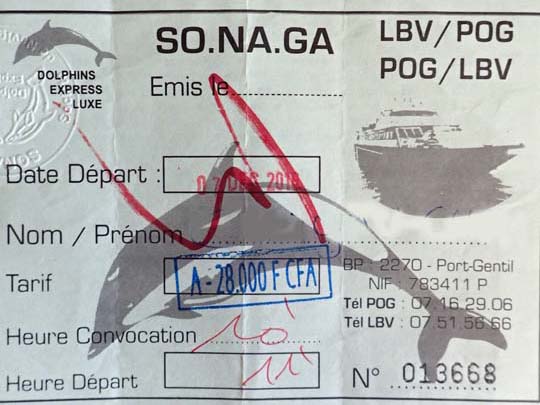 After we got the tickets, there were lots of people lining up already but it was a bit messy so we just followed the instructions by staff and somehow we got on board pretty quickly. The Ferry appears to be from Korea based on some of the signs inside. The ferry was equipped with A/C, a snack bar with some packaged food and drinks for sale, and monitors mostly playing music. The seats are first-come-first-served. Although the leg rooms are limited, the seats were comfortable and we were able to fit both our backpacks. 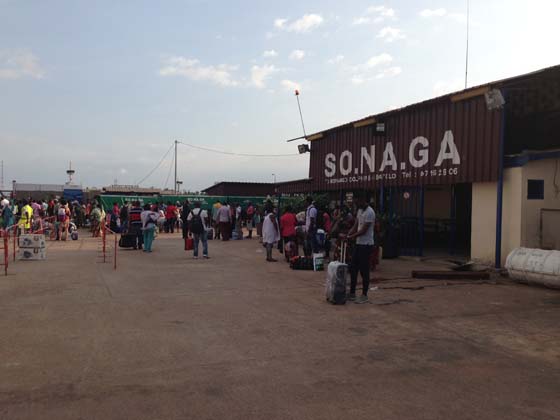 It seems that luggage check-in is also available with extra charges. Check-in needs to be done at a different counter (easy to find out as lots of people have big packed luggage lining up).

The ferry arrived in Port-Gentil around 5pm. Getting off from the ferry, we started asking around near the port for the boats to Omboue. Most people spoke French only but there were a few spoke some English. Based on the information we obtained, the next boat would not leave until 2 days later so we had to spend two nights at Port-Gentil. The two guys we spoke to for the boat were very nice and even took us to a hotel about 15-minute walk from the port. 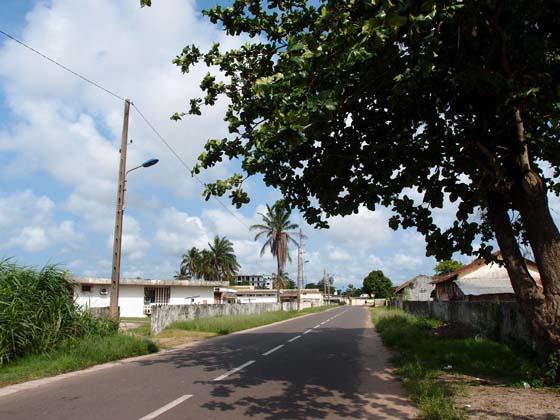 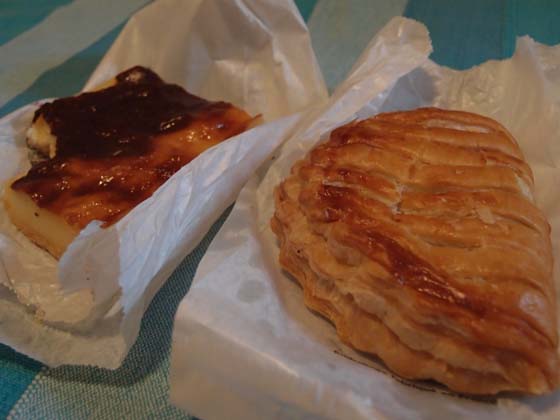 Port-Gentil is the second-largest city of Gabon, and its leading seaport. A fish market was right next to the port. There were a few banks, supermarkets, some stores, restaurants, offices and hotels. There were also schools where we saw lots of cute kids.

While we passed by the port in the morning of the following day we arrived at Por-Gentil, the boat owner we met yesterday introduced us to three backpackers from U.K., as they would be our accompanies taking the same boat next day. The backpackers shared some information about Loango with us, including the contact information about Loango accommodation and activities. Later of the day, they contacted us as they found the other boat which could take them to Loango earlier and faster with a higher price. We then decided to go with them and cancelled our previous reservation. We also called the Director at Loango Lodge to set up our plan for Loango National Park.

In the afternoon, we walked around the city of Port-Gentil and found a few ice cream stands as well. A really cheap and good one was next to an elementary school (100XAF each). Another ice cream stand was on the main road along the port in front of a grocery store. Because of the high temperature, we enjoyed a lot of ice cream in Port-Gentil. 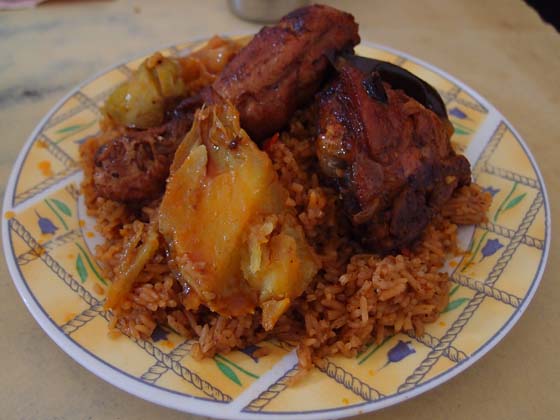 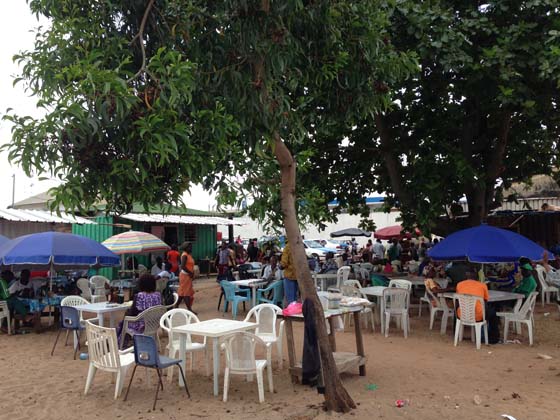 Food stand next to Port-Gentil port

Later afternoon, for lunch we came back to the food stands next to the port where a good amount of local people gathering for food and drink. There were no menus but each stand let us see the kitchens to pick food as we spoke no French. The food options were limited comparing to drinks but the chicken plate we had was a bit small but the taste was not bad.

There were a few grocery stores and supermarkets on the main road across the port. Some of the supermarkets require customers to leave the bags in their lockers. Due to safety consideration we went without our bags. Also, a pastry was outside of the grocery store, good for grab and go. Note that most of the stores in Port-Gentil were closed on Sunday as well as in Libreville.

WiFi: Yes – more stable if a room was closer to the reception

Amenities: No. A water boiler was available in the room.

Meal: Not included. There was a restaurant providing food all day.

Overall close to a 2-star hotel. The staff was generally nice and spoke some English. We stayed in two different rooms and both were fairly clean.

Out of curiosity, we stopped by a few hotels and none of those were cheaper than where we stayed. However the three British backpackers found a cheaper place. If the arrival time is not too late during the day, we suggest walking around to find a hotel/hostel that meet your needs and budget.

Please see the previous post, Way to Lope National Park in Gabon, for the detail of train schedule and price. 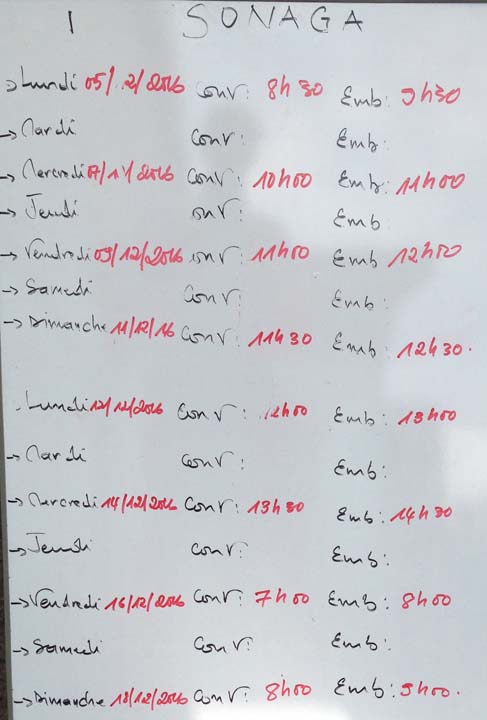 The following is the information for a ferry from Libreville to Port-Gentil.

Other information about Libreville

* Streets in Libreville was well-maintained and clean. However, the air is dusty and polluted because of exhaust emissions from vehicles. 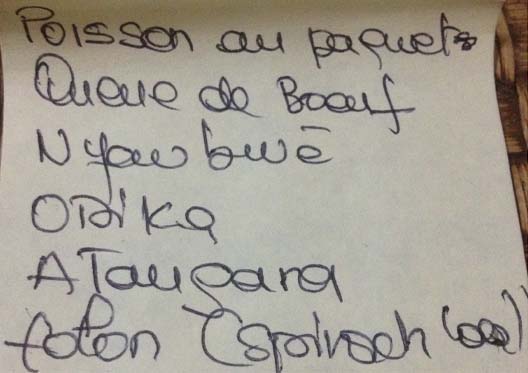 Ferry to Zanzibar from Dar es Salaam We took a taxi from Protea Hotel to the ferry port and bought the same-day ticket ...
2017.01.12
Home
All Trips
2016 Dec: RTW Trip