Elephants walked on a beach and swimming on a shore of the Atlantic Ocean. During the research of destinations for this long backpacking trip, the photos of this unique scene drew our attention and made us decide to visit Gabon as the first country of our trip.

The following activities in Loango National Park were provided by the Loango Lodge during our visit.

Note that a park fee of 10,000XAF is charged per person per day in addition to the prices listed above.

Approximately 2 hours
Upon the arrival at the lodge, we had a welcome drinks with Wyneld, Director of the lodge. Soon after the welcome drink, we started the lagoon boat safari from 4:00pm with the 3 U.K. backpackers. We all walked down to the boat port through the slope next to the lodge reception, and a tour guide and his assistant helped us got on the boat. The tour guide spoke French only while the assistant spoke some English so was able to translate partially. 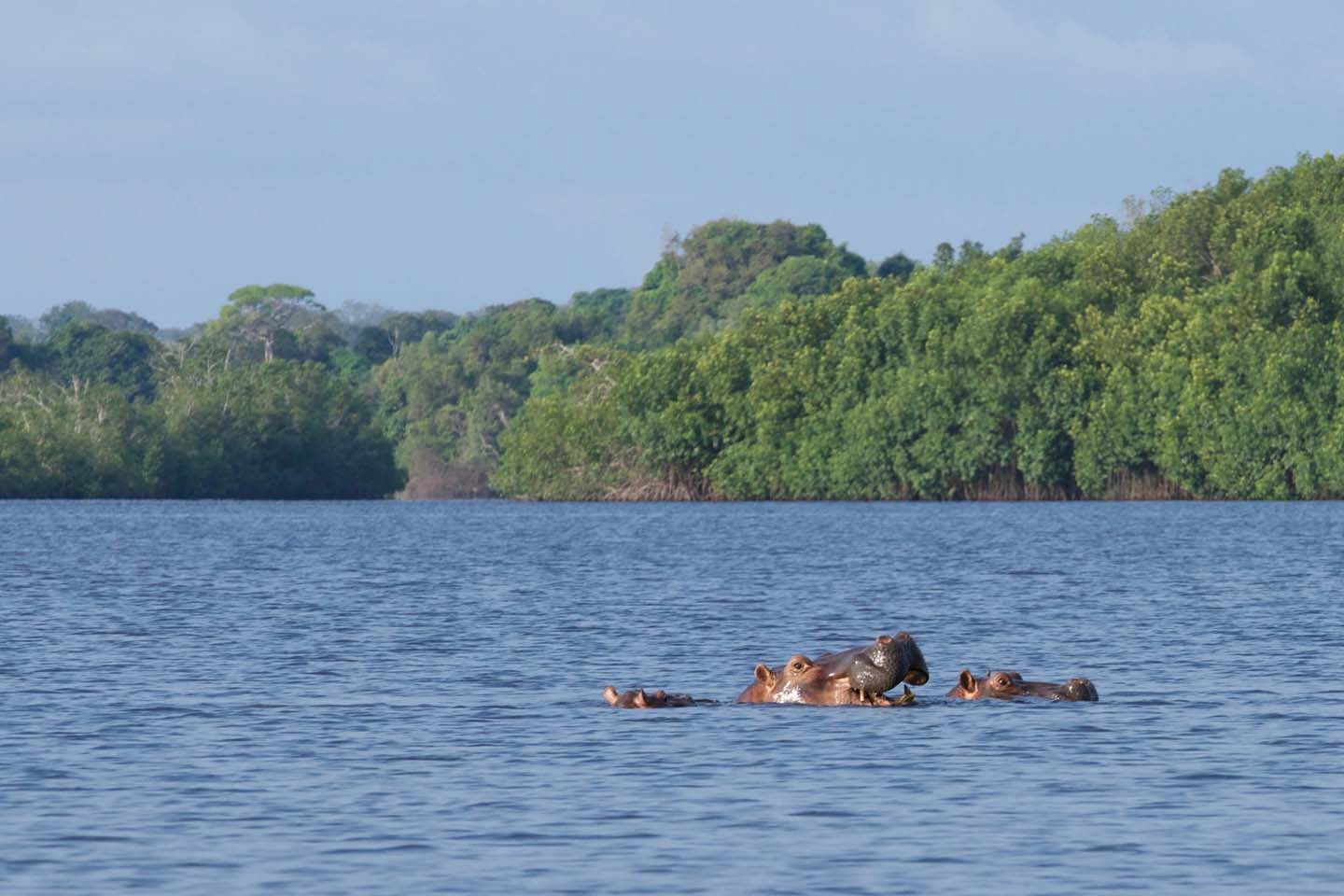 A family of hippos 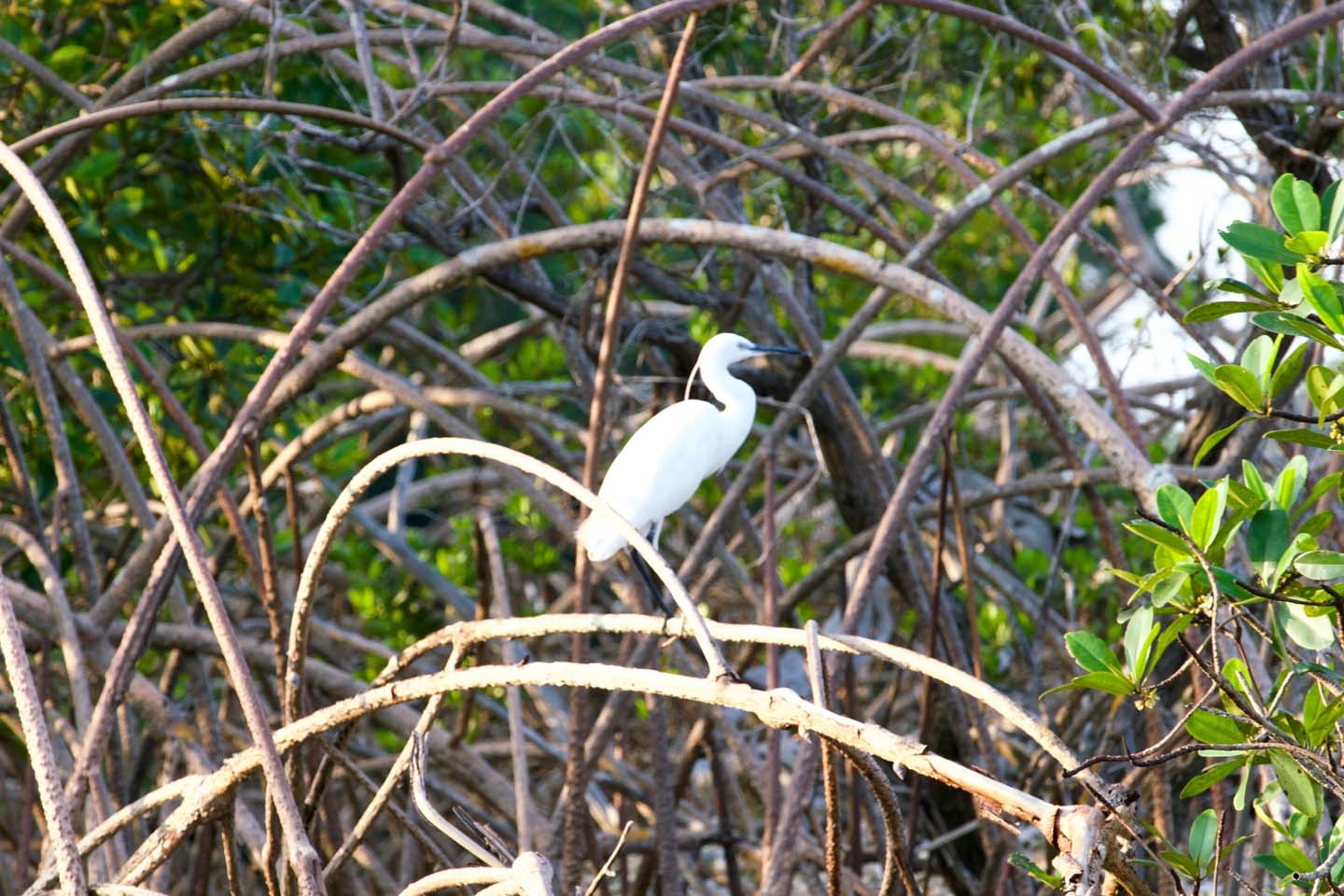 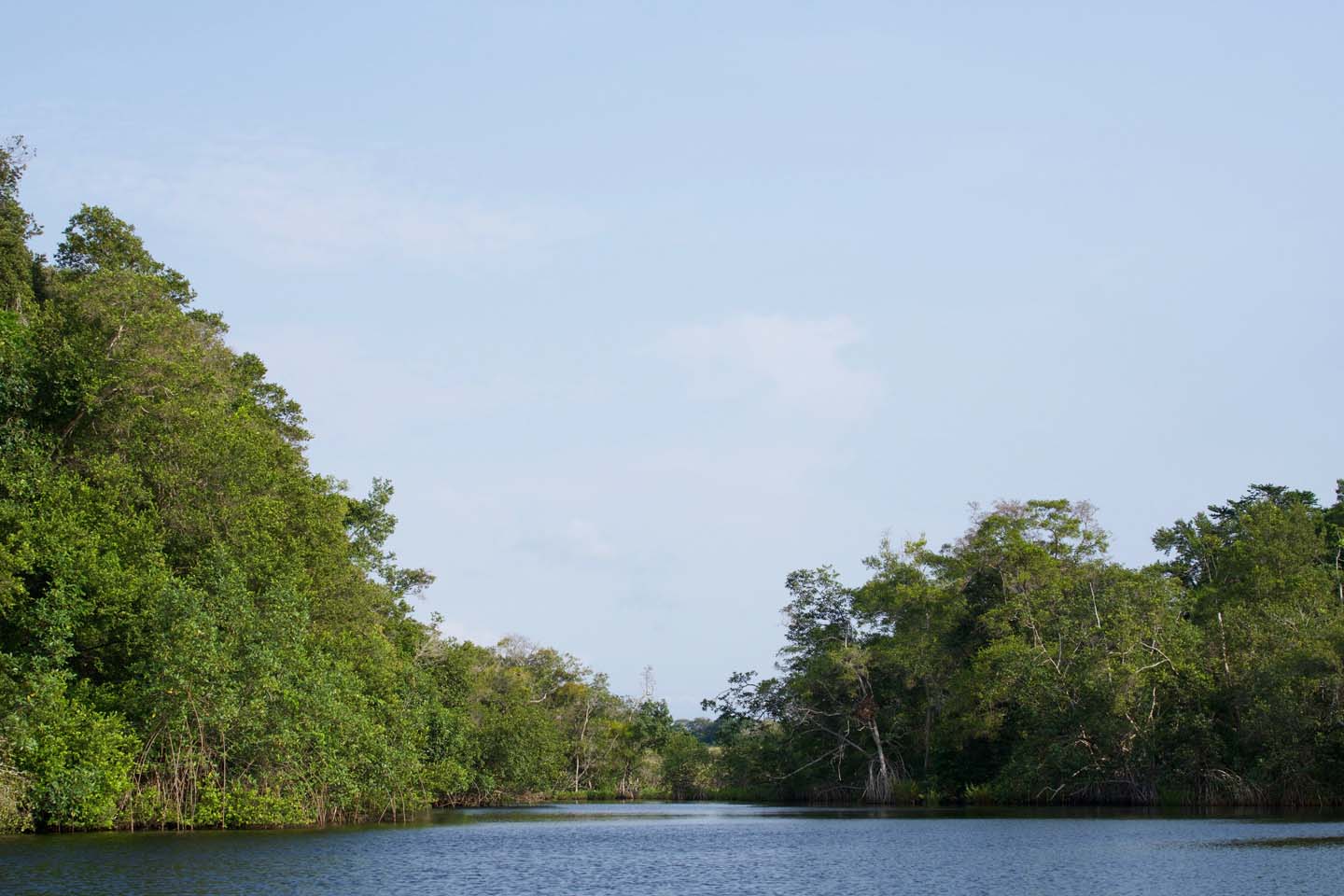 The view was amazing as we moved into the lagoon which was surrounded forests and mangroves. As we went into the open space of the lagoon, we excitingly saw a couple of huge hippos and then a family of one adult hippo and two kids. For safety, the boat were kept some distance from the hippos. Those hippos kept checking on us and came up to the water surface many times. Other than hippos, there were some different kinds of birds as well. 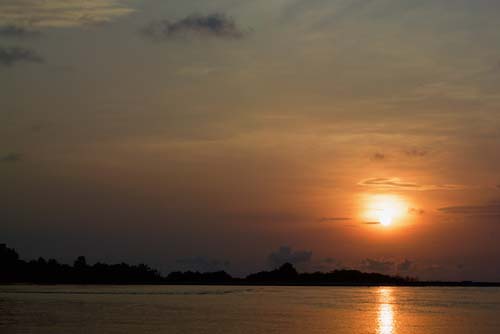 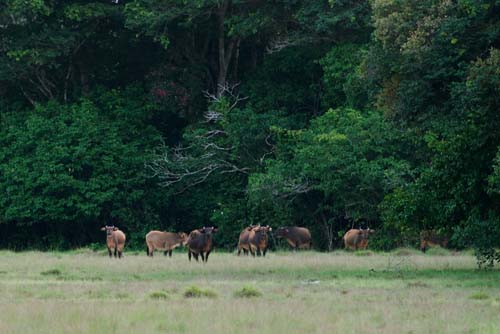 After 45-minute boat tour, we landed on a white sand beach, where the lagoon ran into an ocean, and took a walk around the beach. We were not lucky enough to see animals at the beach, since the animals usually stopped by the beach early morning or late evening to drink water. These animals include elephants, chimpanzee, gorillas, hippos, etc. Regardless of the sight of the animals, the landscape itself from ocean and beach to forests was unique and amazing especially at the sunset time. The sands were very clean and made sounds as we walked. The tour guide also showed us a small crab hiding in the hole in the beach area.

After we spent about 45 min at the beach, we moved to the forest area for a quick walk where we saw a group of buffaloes hanging around a big grass area surrounded by the forests and a lot of birds flying around the forests. The sky turned pretty dark while we were on the way back to the lodge which was lighted up already. 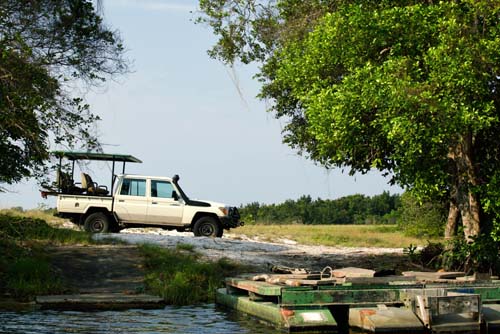 Since we needed to go back Omboue in the evening, our tour was arranged up to 5:30pm. As the National Park was across the lagoon from the lodge, we first took the boat with the same tour guides from the lagoon tour at 8:30 and landed at the Park in about 5 minutes. A 4×4 car was right in front of the boat port, and we were ready to hit the road by 8:40am. Since the tour guide had to go back to the lodge to pick up fuels they forgot to bring, we had some time to walk around the port area and took some pictures with the sign of the national park. By 9am we got on the 4×4 land cruiser and started the full-day safari tour. The weather got hot already and thus we did not see many animals other than some savanna buffaloes and birds. The views looked very unique, as lots of lands were covered by white sands, which indicated the areas where used to be the beaches and thus was totally different from the views in Lope.

Because of the high temperature, we went in to a forest to walk and look for animals hiding from the sun. Luckily we saw more than 10 red river hogs. The tour guides led us carefully to a windward side so that we could observe them closely fro a while. However, the hogs were very sensitive to smell and ran away quickly when the wind direction changed. 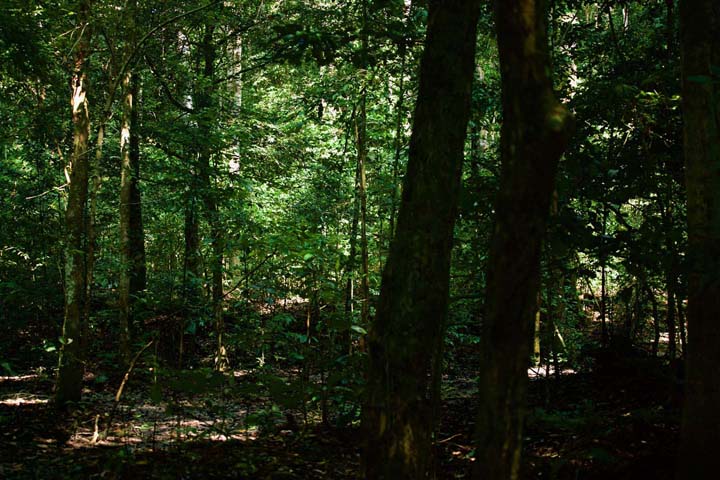 Inside a forest
Sap from a tree 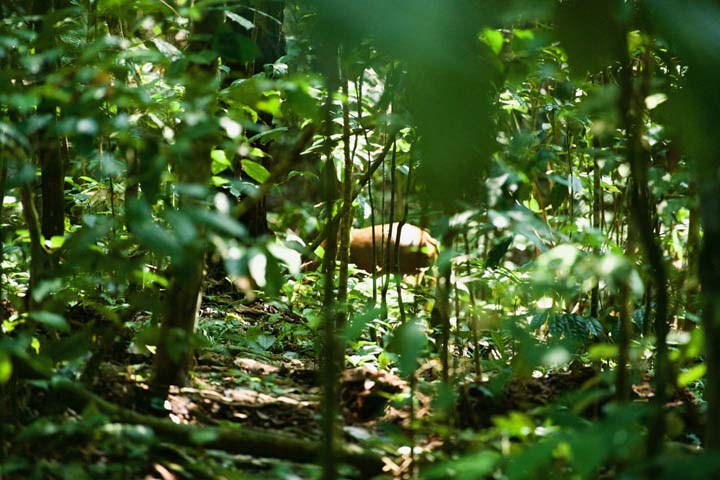 After the forest walk, we drove to the Tassi Camp for lunch and took an one-hour break. The campsite was empty when we stopped by. There were a big table and a few seating areas in addition to a few standalone cabins. The tour guide put up the table cloth and served the lunch box with utensils. The food was pretty good and enough for us (the appetite was not that great due to the hot weather. Water was much more critical). 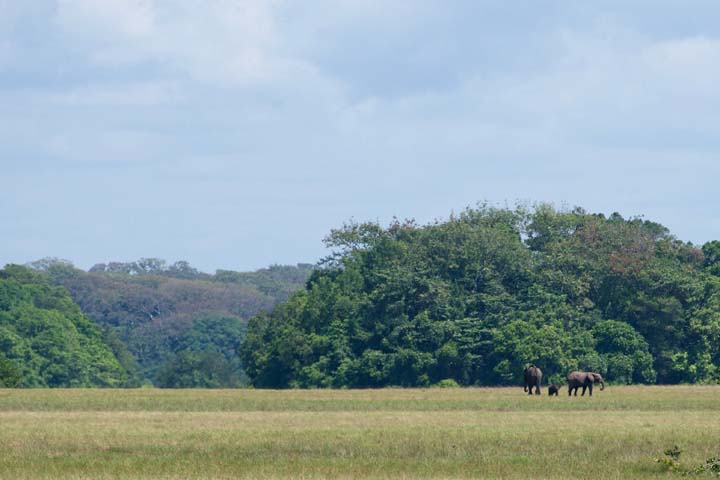 A family of elephants 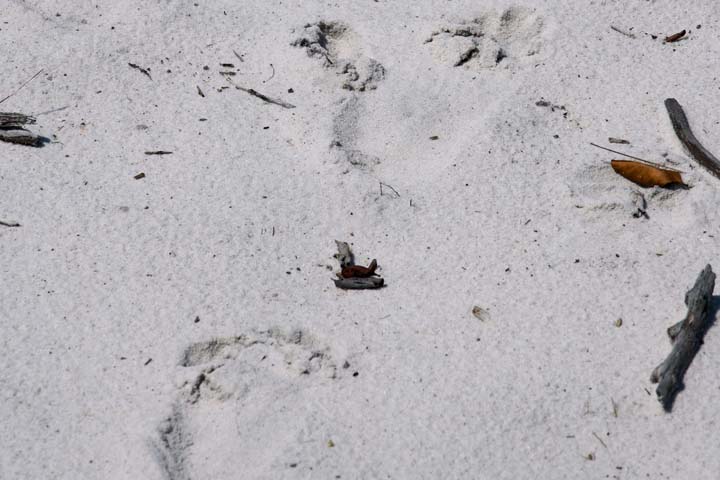 In the afternoon, we drove to Ozouga Camp which was the base camp for the forest with chimpanzees. As the temperature went down, more animals came out from the forests. More buffaloes were in savannah to eat grasses and drink water. Even a family of forest elephants (2 adults and 1 kid) showed up soon after we got on our way after the lunch.

Although there were some animals outside of the forests, the temperature was not low enough for more animals come out from the forests. Therefore, we directly headed to Ozouga Camp to meet some local researchers and take a quick look at the observation site. Suddenly one of our tour guides came to grab us to the open space behind the camp. As we got there, a young male hippo was eating grasses about 25 meters away. As a hippo is the animal killing people the most among all animals, we were very careful when getting close the hippo. Following the tour guide, we walked behind the bush to get close to the hippo and we finally approached to about 10 meters away. All of us, including our tour guides and local researchers were excited because it was very rare to see a hippo on land in Loango National Park. It seemed that this hippo just got out from a fight since he was bleeding from the neck. It was one of the most exciting moments in Loango to see the most dangerous animal from a short distance and we spent nearly half an hour observing the hippo. 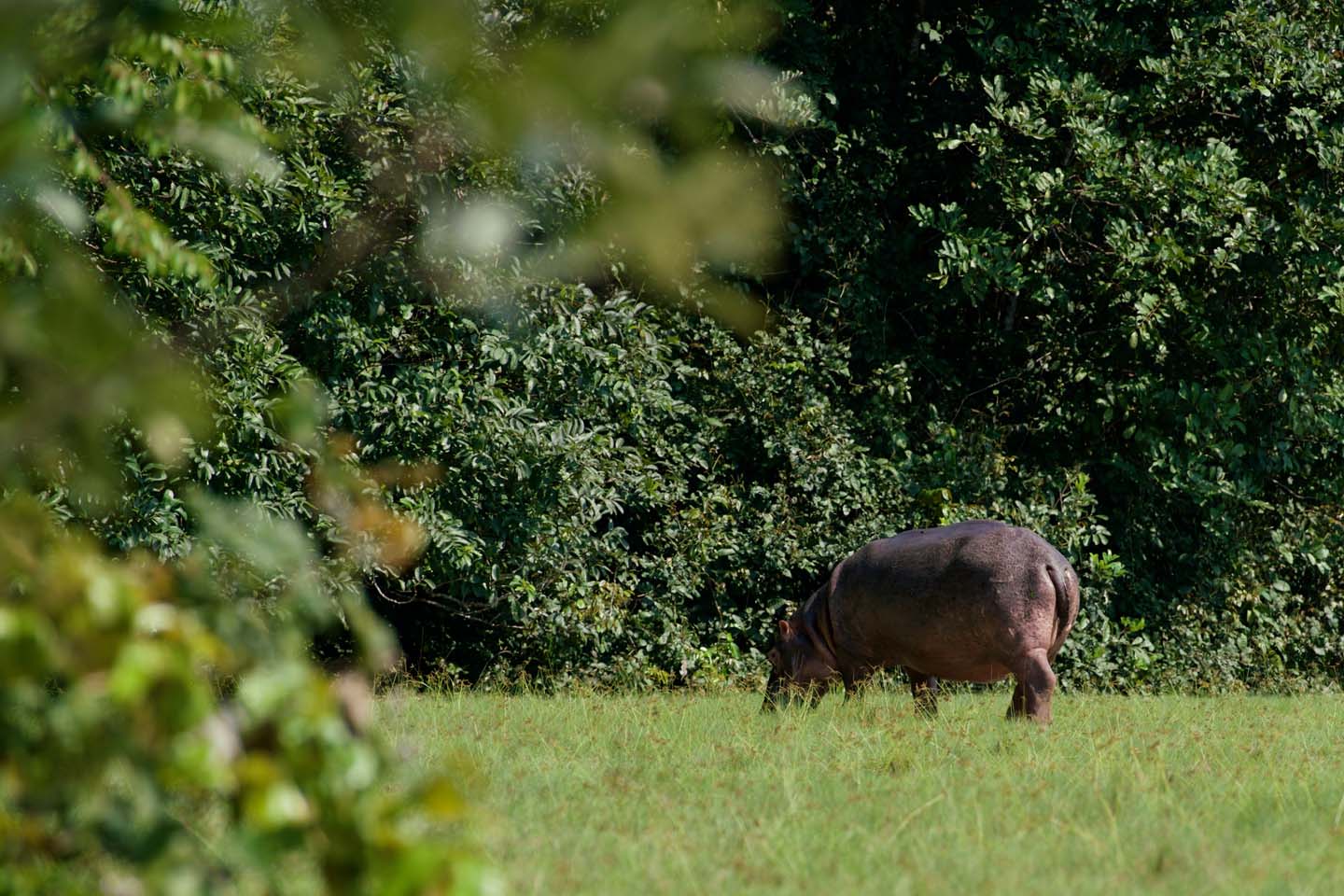 On the way back to the Lodge from Ozouga camp, two groups of forest elephants showed up right in front of us. The first group had just came out from a forest and was crossing the savanna. As we approached to them, they ran into another forest. When we stopped at the point where the elephants went into the forests, we heard some sounds of branches upon being broken. One of the female elephants cried and ran out from the forests to protect her family by threatening us, and she went back to the forest shortly since we did not try to get any closer. We definitely did not intend to scare the elephant family, while it was an exciting moment to have the direct interaction with the nature and wild animals. The second group had a mother elephant enjoying the food with one young females and a child hanging around on the other side of the road. The old female elephant, who was calm and ignored us all the whole time, was in the savannah and eating grasses while a young female and a kid were still at the edge of the forest. It took a while for the two to come out from the forest because the young female sensed us and tried to protect the kid. According to our tour guide, the elephants did not have great vision but could sense very well from the smell. The young female frequently put her nose up to smell us for any danger. 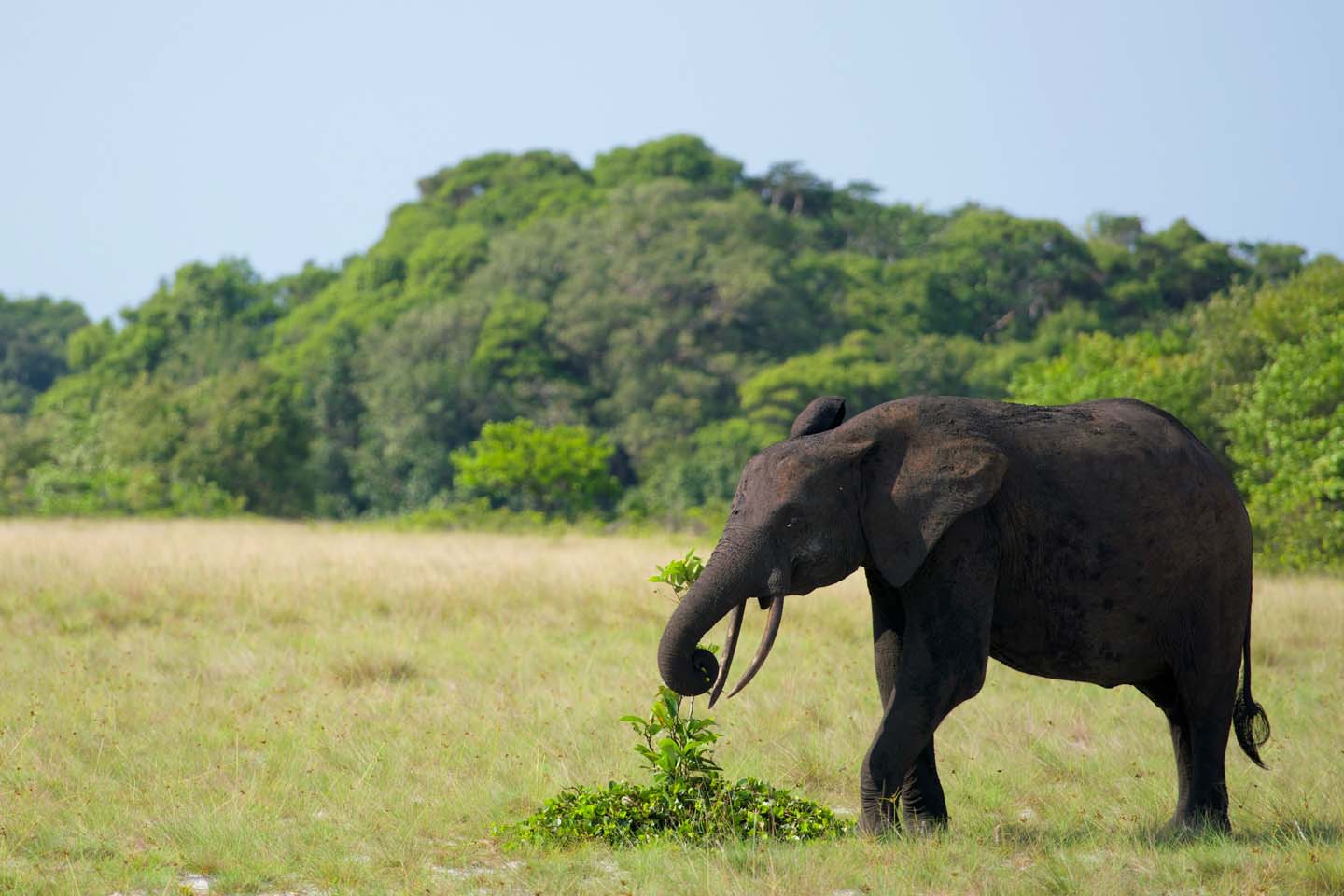 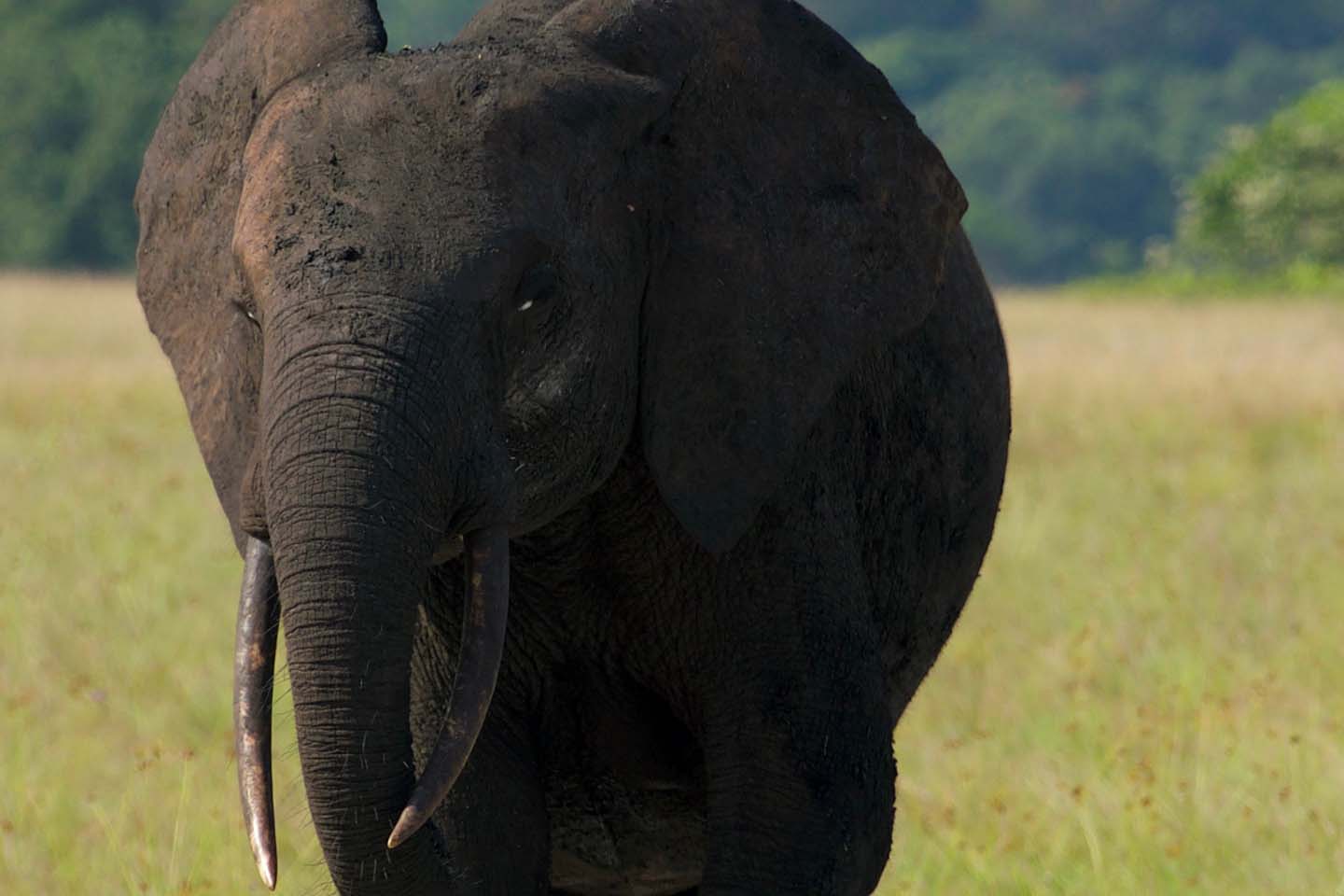 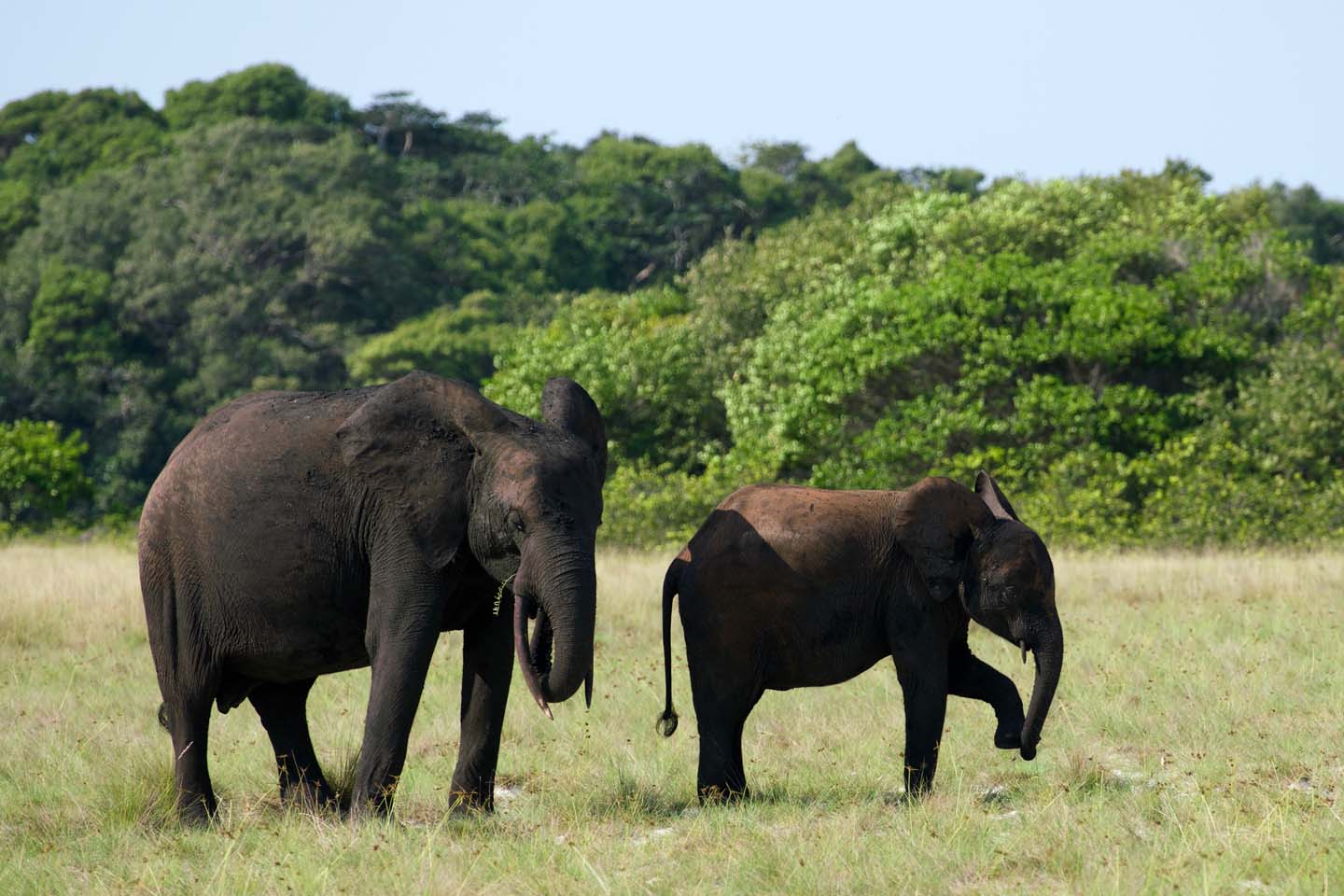 After observing the elephants, we also saw 1 antelope, 2 more hippos, 2 chimpanzees and more buffalos and forest elephants. Seeing the wild forest elephants walking and chimpanzees running on the savannas really showed us the energy of wildlife. Even right before the end of the safari, there was another group of red river hogs walking from the savanna into the forest and the assistant led us to get closer to observe and take more pictures. 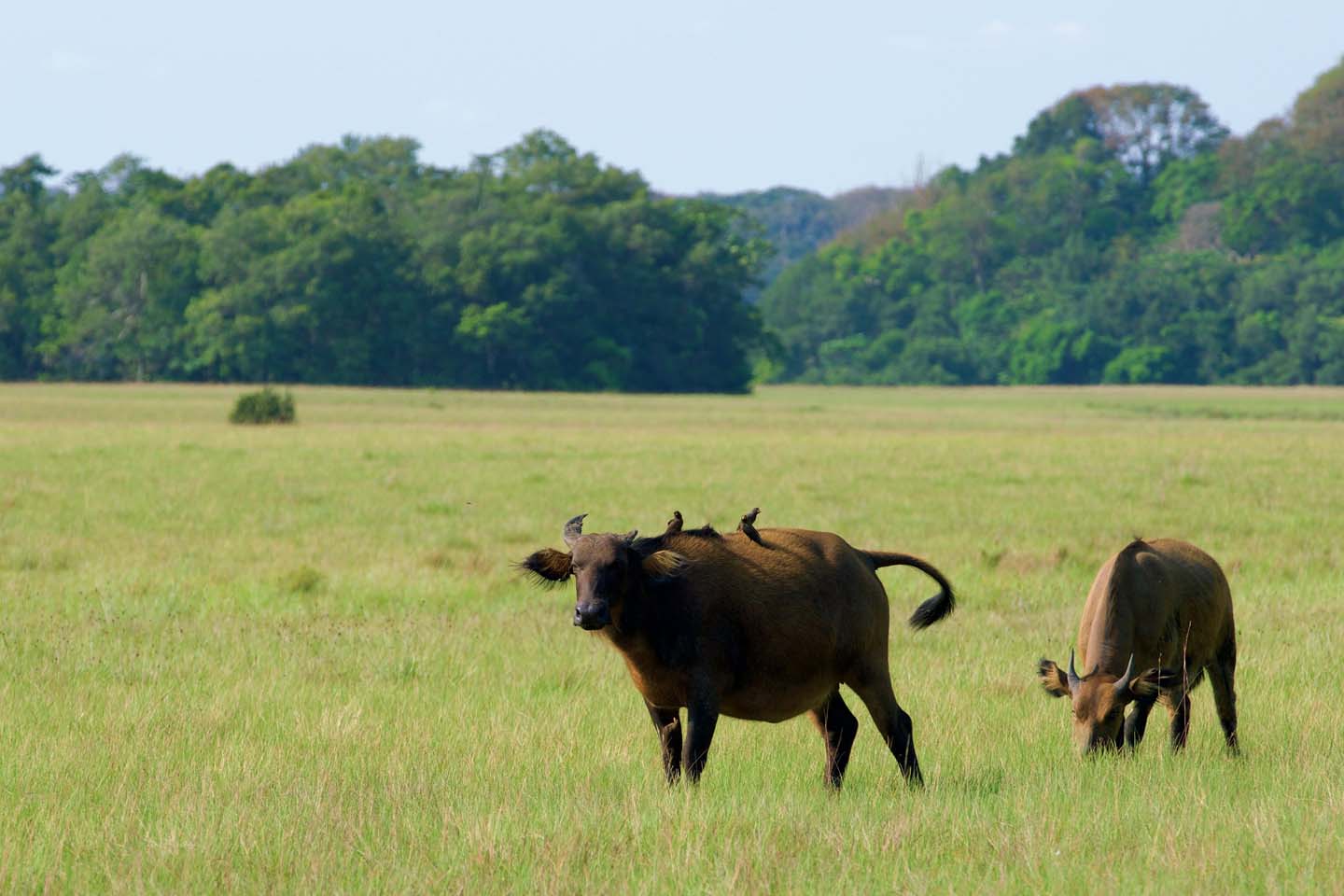 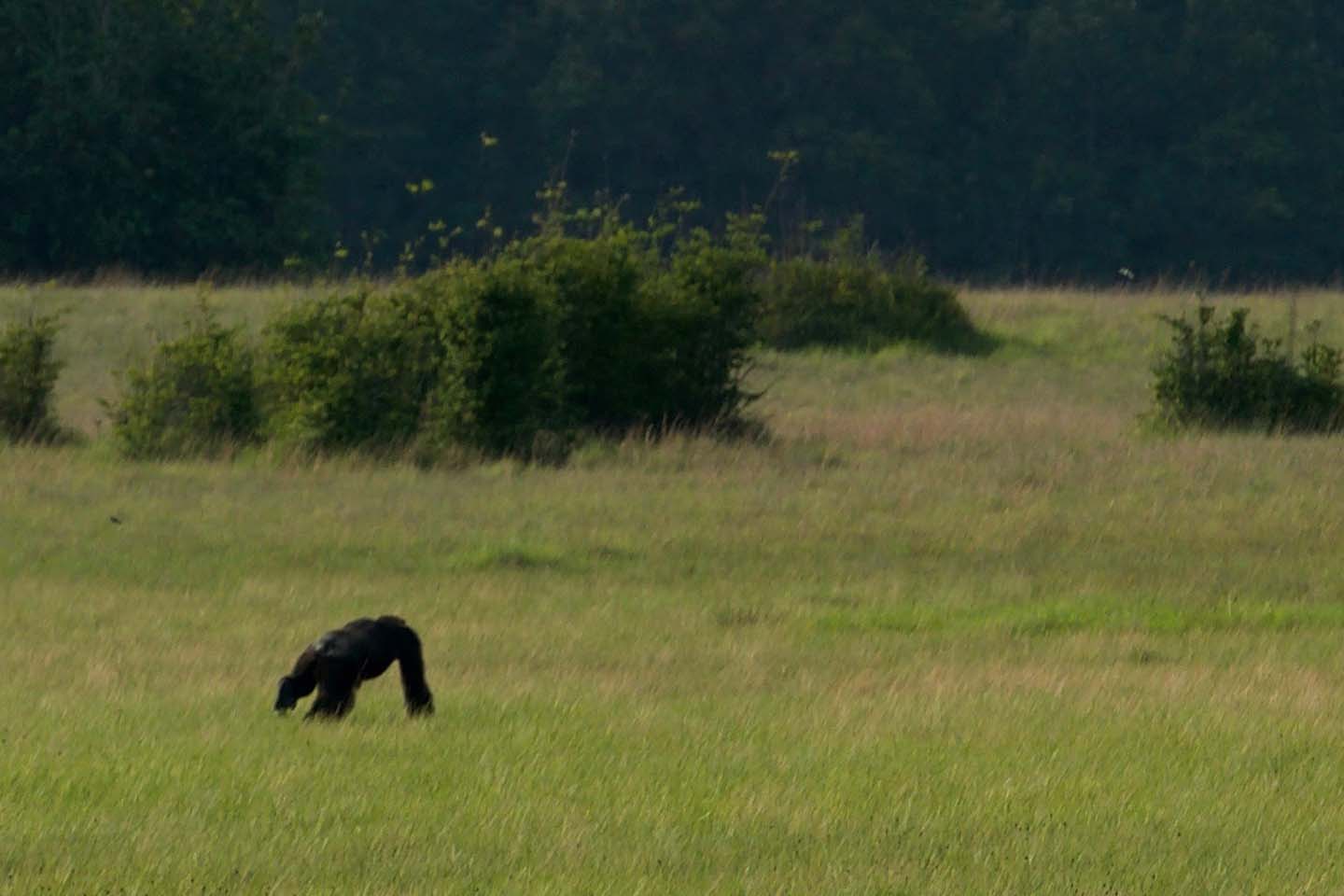 In Loango National Park, we experienced more direct interaction with animals than Lope because of the shorter distances with wildlife and more time we walked on the same ground with animals rather than sitting in a car. Also, we were the only guests for this tour. The experience of the private tour at the unique location was so special and incomparable to anything else.

We did not join this tour but got some information from the U.K. backpackers. The tour was a half day and led by the scientists researching gorillas in a forest in Loango National Park. According to them, they spotted multiple gorillas from about 5 meters away! 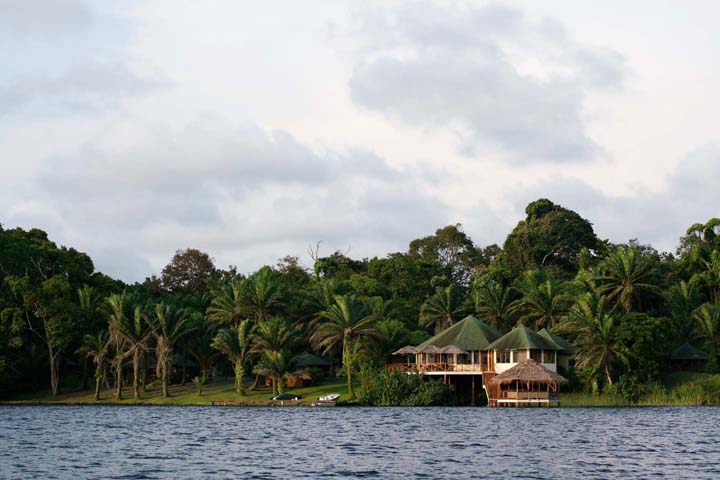 Loango Lodge from the other side of lagoon 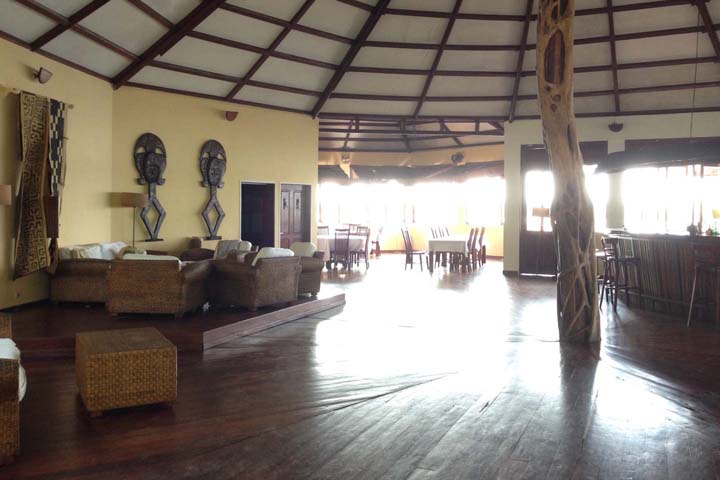 Lobby and bar of Loango Lodge 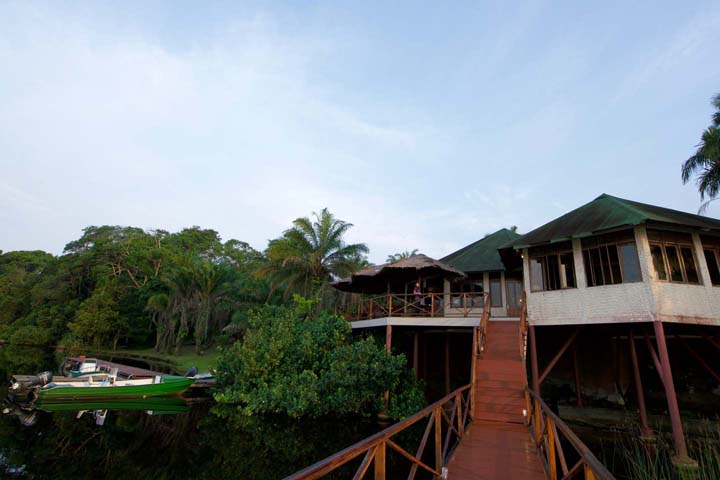 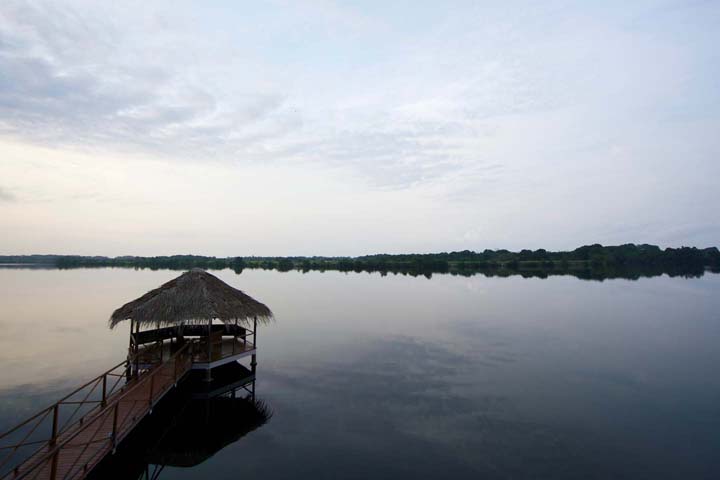 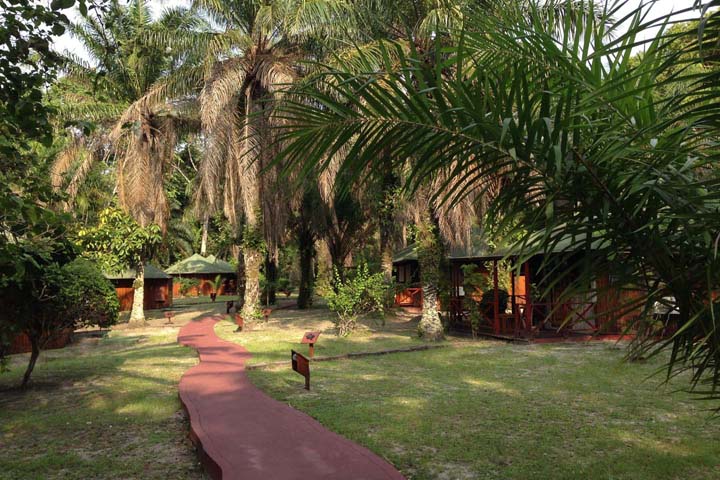 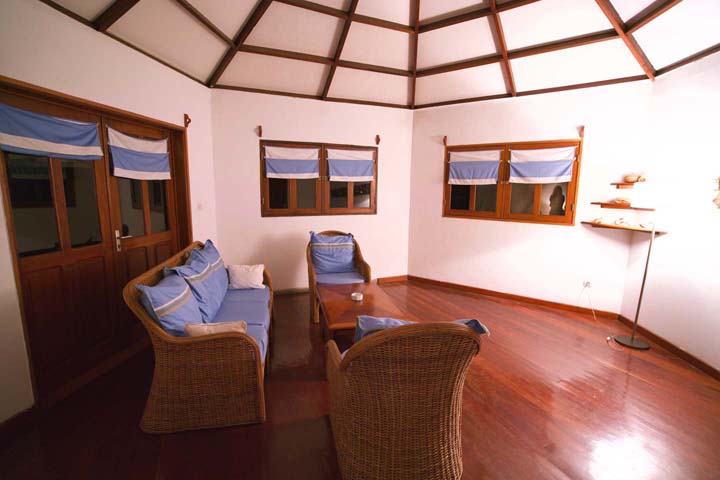 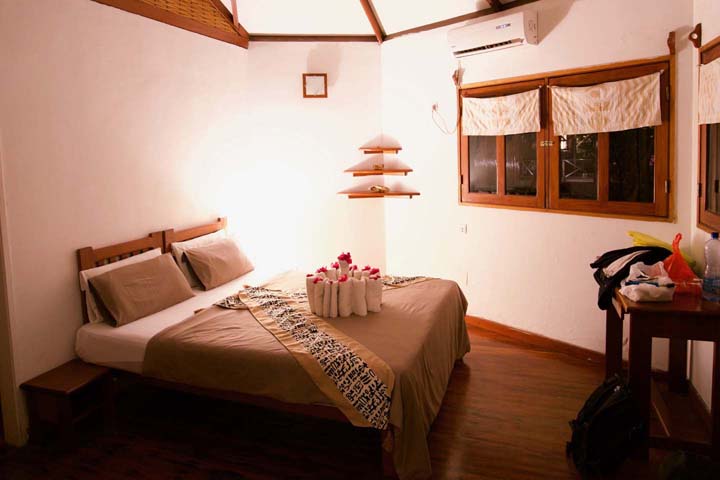 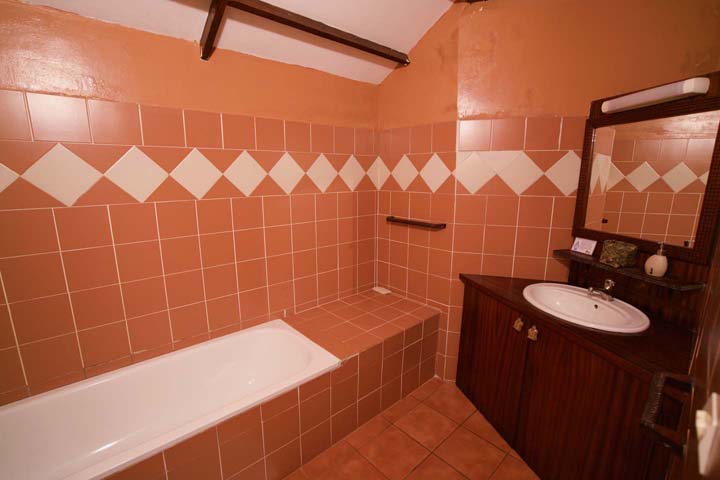 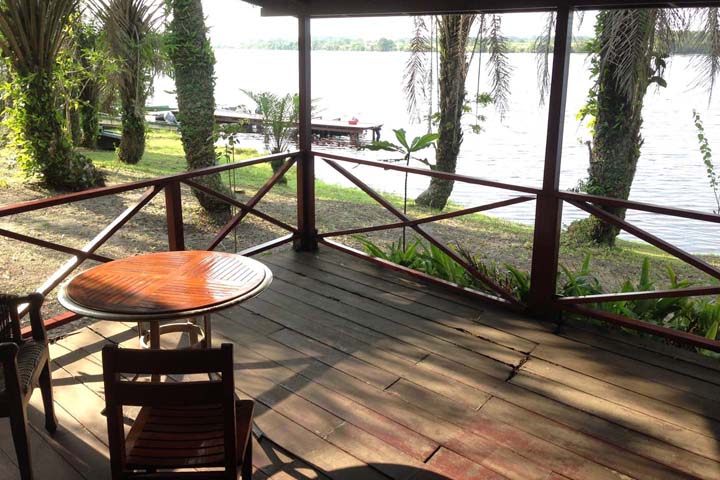 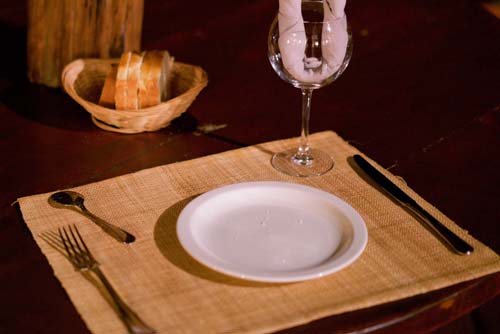 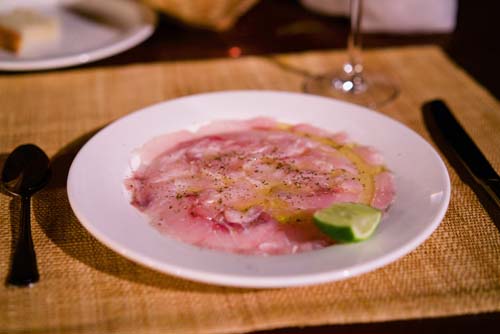 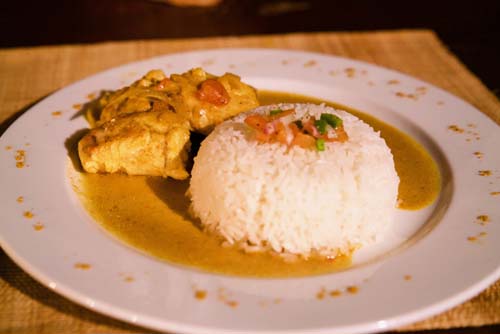 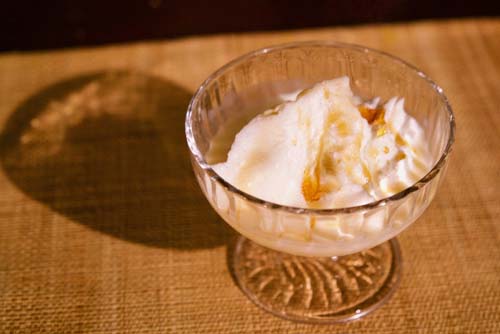 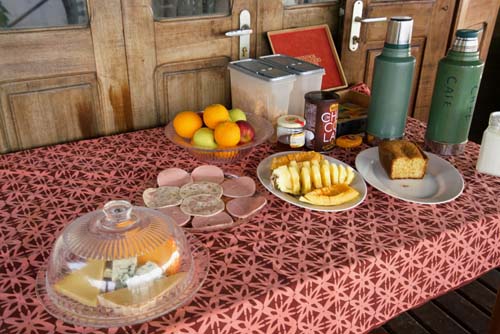 Price: 100,000XAF per night per person, with all food (dinner and breakfast) included (drinks excluded)

Loango lodge had one main building for meals, bar, and reception, and about 7 private lodges in its property. The lodge we stayed had a living room, bedroom, bathroom (with bathtub) and outdoor sitting in the small balcony. The bathroom had hot water and all rooms were air-conditioned. There is an outdoor pool in the property as well.

Electricity at Loango Lodge was available only from 5pm to 8am. Also, there was no ATM in Loango.

The dinner was a course meal which started with a dish of cold white fish, and then a main dish of chicken, ended with a sweet desert. The dishes were not comparable to high-end restaurants in the developed countries but were very delicious especially in the area isolated from the civilization.

The breakfast was a self-served continental buffet at the reception balcony before we headed out for our one-day 4×4 safari.  There were various kinds of bread and cheese, pineapples, honeydews, tea and coffee, tasted good overall.

The accommodation was a bit pricey to stay at this lodge but we still highly recommend Loango Lodge for its great services, relaxing environment, and ease of access to Loango National Park.

We also heard that there was Gavilo Lodge close to Loango Lodge. However, no information was available when we visited the Loango National Park.

After Chobe National Park, it was time for moving to Namibia, "Land of the Brave", which possessed more safari exposures...
2016.12.15

After the magnificent view of the oldest desert, we headed to Windhoek, the capital of Namibia. The end of time in Namib...
2016.12.22
Home
All Trips
2016 Dec: RTW Trip