From Loango Lodge to Omboue 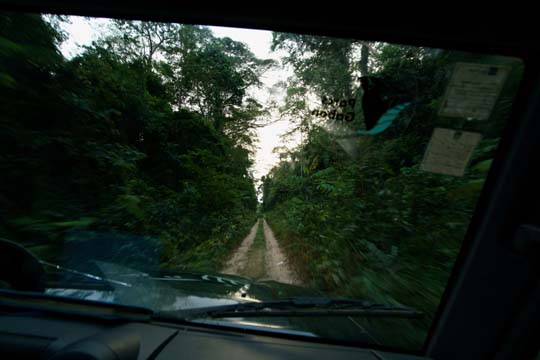 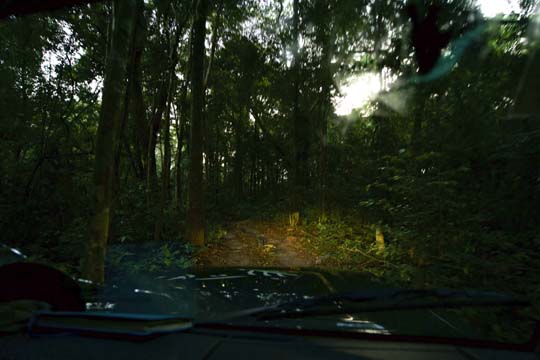 As we planned to go back to Omboue at night, we got back to the lodge from the safari tour around 5:30pm, as previously discussed and scheduled with the Lodge Director. We were allowed to take quick shower and packed up our belongings left in our lodge without any additional costs. At 6pm we left the lodge. The road was bumpy and actually got worse because of the thunder rain, and the sky got completely dark pretty soon with the thick clouds in the sky. Thanks to the experienced driver from the Loango Lodge, we arrived safely at the Olako Hotel in Omboue around 8pm. Since there was no light on the road between Loango to Omboue, the driver stayed over night in Omboue in stead of heading back to Loango for safety purpose. 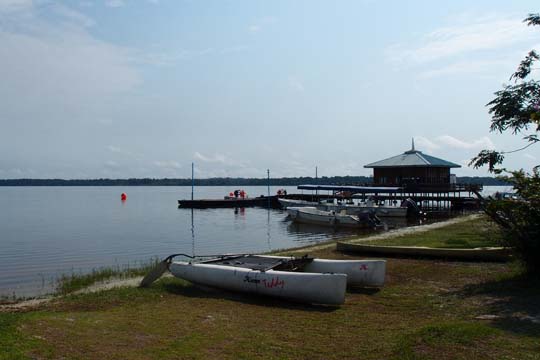 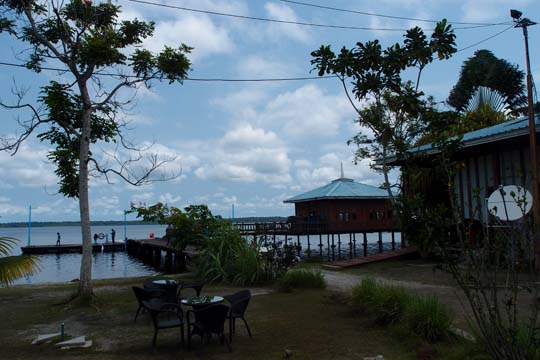 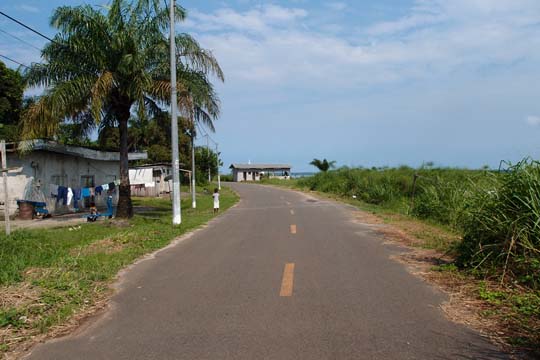 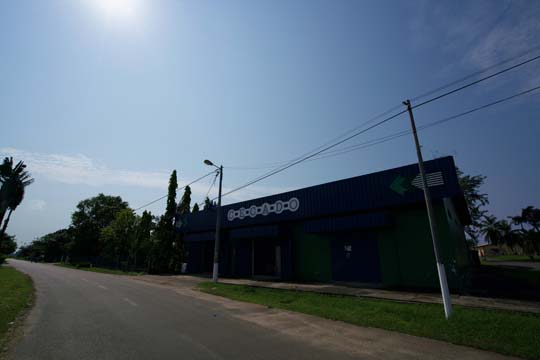 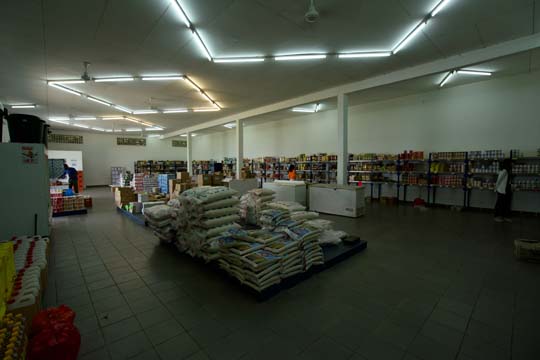 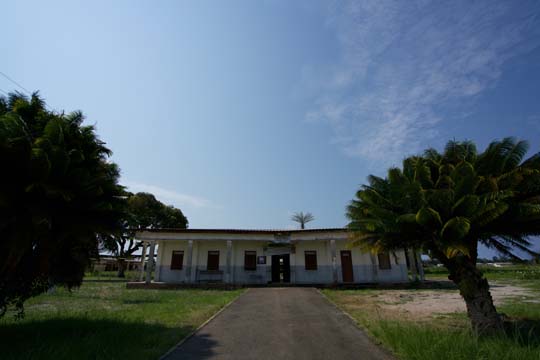 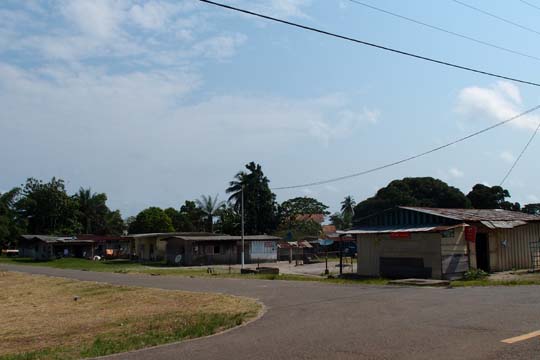 As our boat going back to Port-Gentil was scheduled at 12pm, we walked around in Omboue. It was a small village and the local people were generally nice and friendly. The roads in the center of the village were mainly paved, while unpaved roads were also easily found by walking a couple of blocks away from the center. A new local hospital was under construction, and the residential buildings were a mix of new and old. Due to the humidity and high temperature, all grasses were pretty high and most of the houses were surrounded by those greens. As it was a Sunday, some people were gathering and singing at the church and some kids were playing around and swimming in a lagoon. 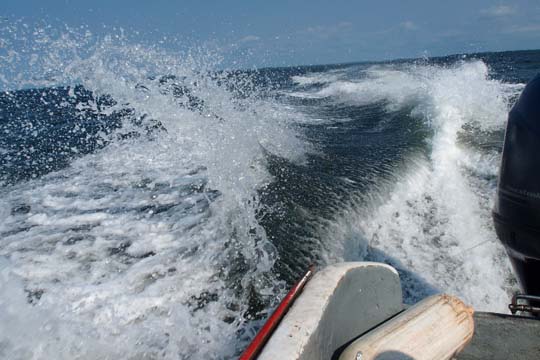 Water splash in bay in front of Port-Gentil 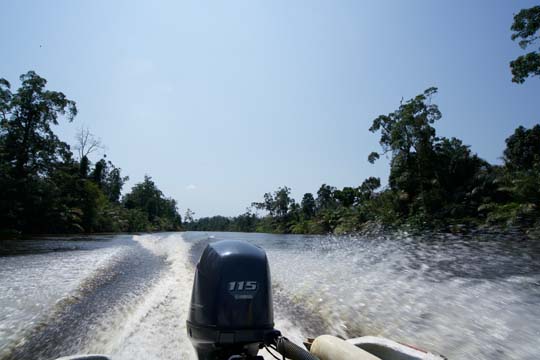 We left Omboue around 12:30pm and it took 3 hours to arrive at Port-Gentil. Unlike the boat on the way to Obmoue two days ago, the boat this time did not have a roof. There was nothing to block us from the direct sunlight and water splash from waves. The river on the boat route was still interesting and we felt like the boat safari. When the boat passed the river and went into the bay in front of Port-Gentil port, the waves were really high and the boat was very shaky. Fortunately, we did not get wet much; however, local people sat at the other side of us got completely wet with sea water.

From Port-Gentil to Libreville 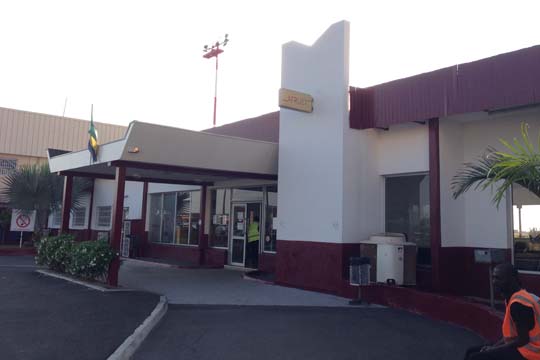 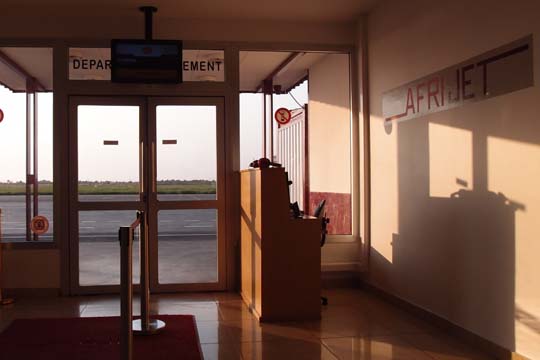 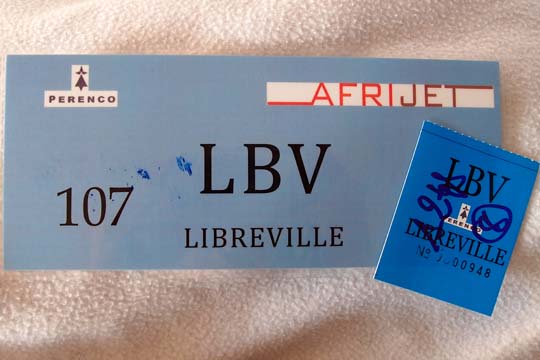 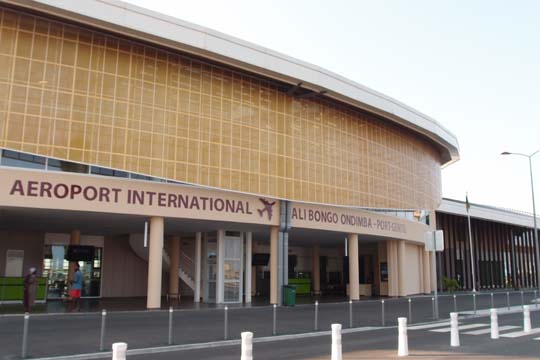 When we walked out from the port, we saw a group of local young people including two young guys whom we initially reserved the boat to Omboue on December 7. Although we ended up cancelling the reservations, they were still very friendly and asked us to take pictures together.

Since it was a Sunday, most stores were closed. We grabbed lunch at the restaurant right across the port and then got a cab to the Port-Gentil airport to catch a flight with Afrijet airlines to Libreville. There were only three seats in the terminal before the security check but A/C was on so we just sat on the floor waiting for the check-in time. Once the check-in started it went pretty smoothly, and there were a lot more seats at the waiting area in front of the gate. 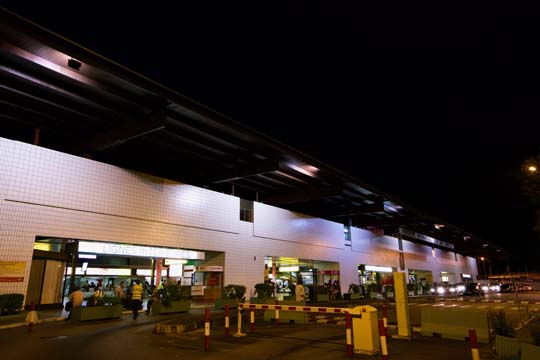 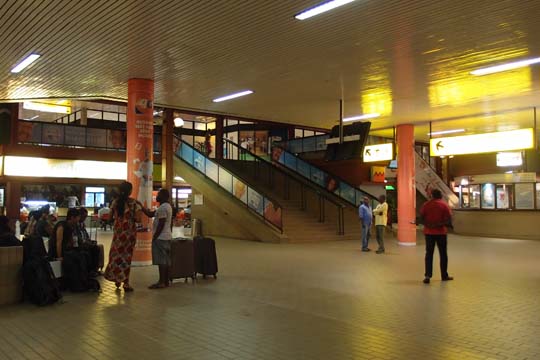 (Libreville)Lobby in front of international terminal 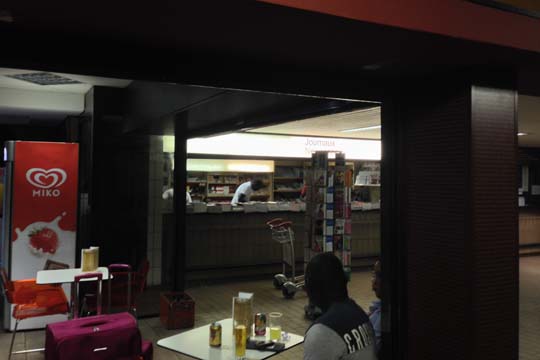 The flight departed at 6:40pm and arrived at Libreville at 7:15pm. Libreville airport had two terminals which were separated for domestic and international. We walked outside and made a left to go to the international terminal for our next flight to Zimbabwe. At the lobby (outside in front of the terminal building), we waited for our flight at 00:40am for Johannesburg. Since the lobby was outisde without A/C and we were not allowed to enter the terminal building until the check-in time, we kept sweating until the check-in time. We suggest going to the airport right before the check-in time. 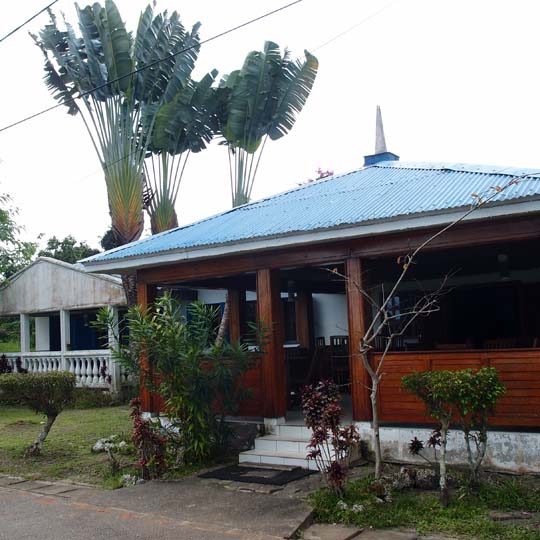 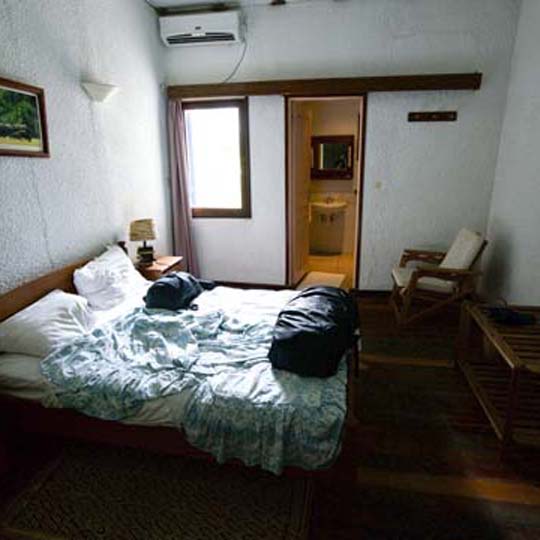 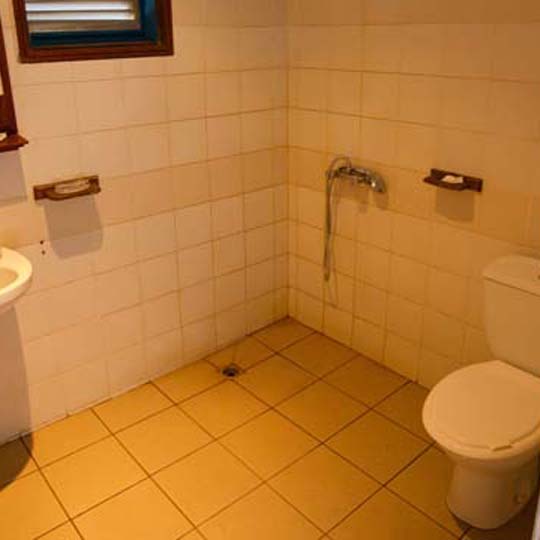 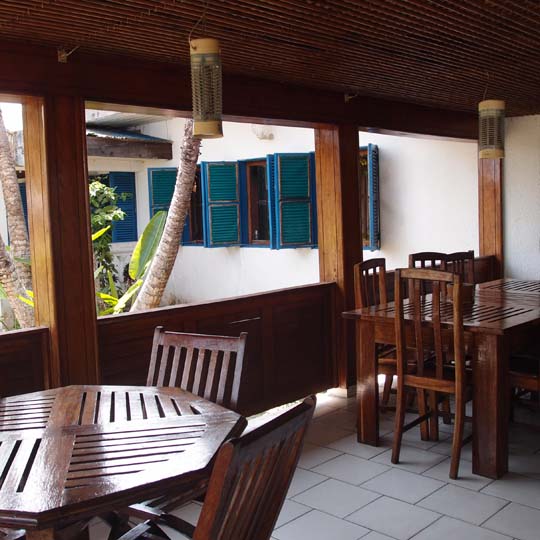 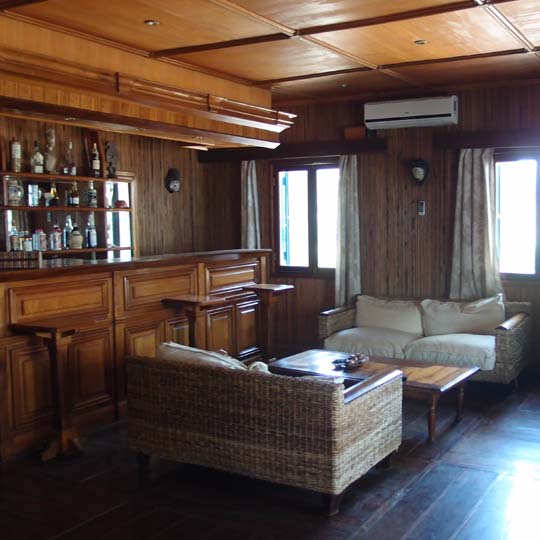 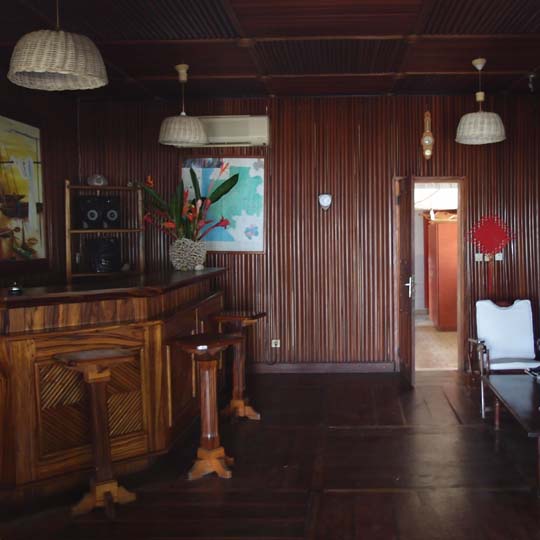 WiFi: Yes but the router was in a management building across the street from hotel building. We had to ask a management to turn on the wifi and sit outside of the hotel to use the wifi. The wifi speed was very slow.

The Hotel was located right next to the port and the main building had one floor. There was outdoor seating at the entrance and a reception attached to an internal kitchen area. There were about 10 rooms in the main building and we stayed in one of them. Not sure if more rooms were available. In our room, there were a double bed, wardrobe, table, chair, and bathroom. There were also some common spaces in the building with some sofas. One of them had a bar but not sure about the opening time or charges since we did not use it.

We were able to borrow the water boiler from the kitchen and hang our clothes in the backyard during daytime.

Facing the Olako Hotel, on the left side there were other accommodations available. However, the prices were higher than Olako Hotel per our inquiry with the hotel staff. 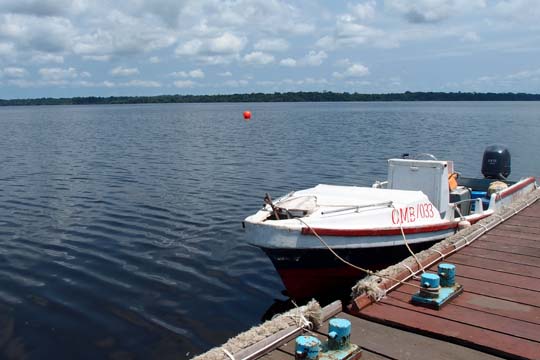 From Port to Airport

It was not difficult to take a taxi because many taxis were running on the road in front of the port in Port-Gentil.

From Port-Gentil to Libreville

The airport main terminal was new and beautiful but Afrijet flights were at a separate smaller building right next to the main terminal. This small terminal had only two check-in counters, one security check and one boarding gate.

A supermarket was next to the Olako Hotel. As the village mainly relied on import, most of products were processed food and drinks. The supermarket took cash only, and we purchased two packs of cookies for 1,000XAF. The clerk was very friendly and spoke a little English. There were also a few small convenience stores in the village. Facing the Olako Hotel, on the left side there was a restaurant (a couple of min away).

The restaurant located across the port provided various types of food, including salad, pizza, pasta and other dishes. We ordered a pizza and shrimp salad. The pizza had shrimp, octopus, clam and green pepper covered with thick cheese. Although the price was not cheap, the taste was acceptable. We paid 15,200XAF for the two dishes.

An avenue with baobab trees from the book "The Little Prince" and animals uniquely evolved. One of the poorest countries...
2016.12.23