We left from the hotel in Dar es Salaam around 5:30am by taxi to catch our long-distance bus to Moshi. All the buses today were scheduled to depart by 6:45am so there were lots of passengers at the bus terminal already. Mostly were local people with very few backpackers. Our bus left from the bus terminal on time. 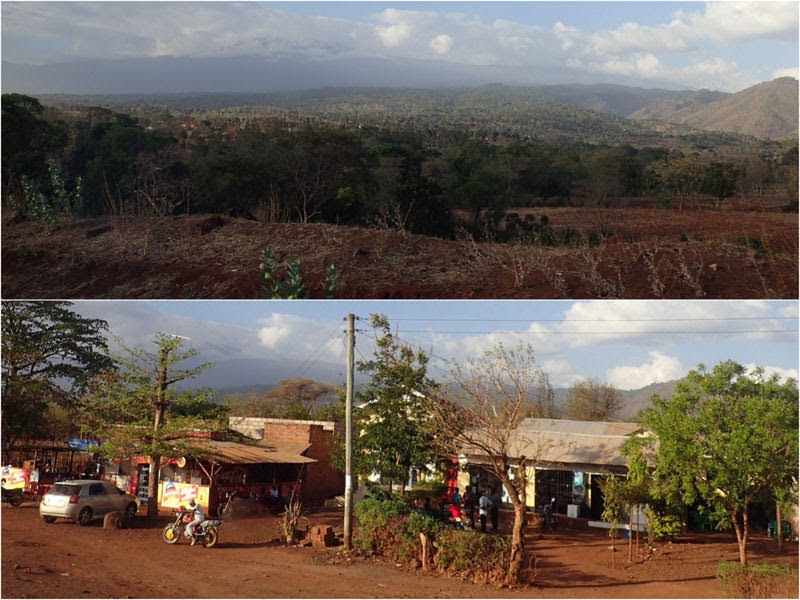 We arrived at Moshi after 5pm. Upon arrival, lots of street vendors came around to sell snacks, watches, belts and charge cords. There were also a few from tour companies trying to sell tours to Kilimanjaro.

Moshi – the Gate to Kilimanjaro

Moshi was a popular town for people heading to Kilimanjaro. We did not see that many tourists during our stay but it was easy to find places to eat and buy some food before heading to Kilimanjaro. Most of the buildings were three-floor concrete or brick houses. Convenience stores usually put the refrigerators with cold drinks outside with a lock. Lots of people walking on the streets during daytime. After sunset, the town turned really dark due to lack of street lights. People on the streets became much less as well.

On the main street, there were lots of vendors selling pastry and popcorn, daily essentials, SIM cards, along with kitchenware, tailor shops and convenience stores. Lots of tailors worked on the streets and a good amount were men. We also saw nail spa twice on the streets. Both times were a young guy sitting on the floor with a small basket full of different colors of nail polish in front. One of the times the young guy was putting the nail polish on the toenail for a girl wearing a dark veil. 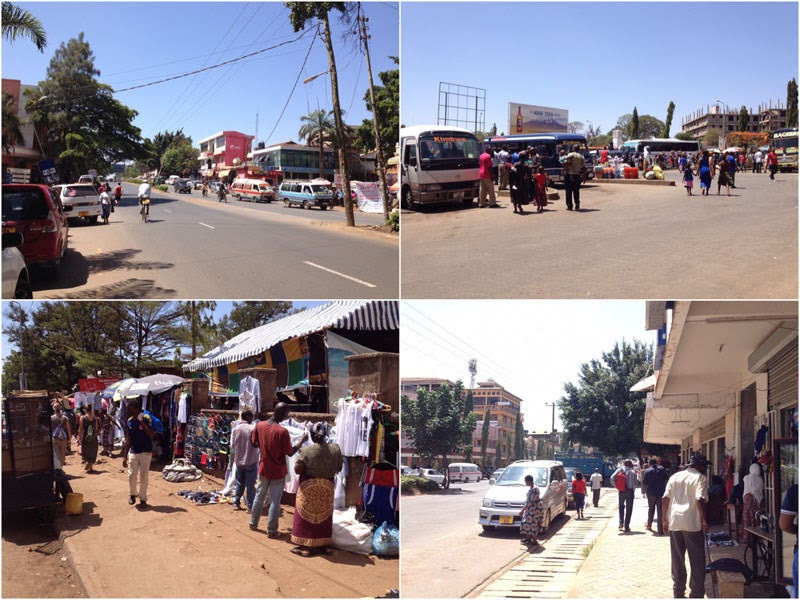 After getting off from the bus, we took a walk to Kilimanjaro Backpackers Hostel for about 15 minutes. The hostel staff who checked us in was friendly. There were lots of Japanese backpackers who just finished their tours to Kilimanjaro staying at this hostel. They came for the sunset view from Kilimanjaro on New Year day but unfortunately it had been raining. We were lucky to meet them as they shared lots of great information with us based on their experience.

We spent some time finding tour companies to collect information. After talking to a few, we decided to go with Chief Tours as the owner Adidas seemed nice and was recommended by some of the Japanese backpackers we met at the hostel. Refer to Kilimanjaro, Tanzania for further details about the tour.

Next day we just walked around in the town to see if we could find more people to join us for the tour. We did see some backpackers but they either booked a tour already or had not yet made their minds. Thus we just went back to Chief Tours and booked the 6-day tour. Refer to Kilimanjaro, Tanzania for further details about the tour. We also purchased dried fruits and snacks from a store, where we met two funny guys from Belgium, who just came to Moshi randomly and decided to try the mountain climbing in Kilimanjaro, and the store staff was trying to sell them lots of items. They said they should probably buy the birthday hat as well for celebration on the summit.

Per previous discussion with hotel staff, we were informed that a registered taxi had a color line around the car, but somehow the car they arranged for us was all white, which was probably unregistered. Also from some travel blogs, some travelers noted that on the mainland Tanzania (i.e. excluding Zanzibar) the registration can be identified through the car plate – yellow plates are for private cars and white plates are used on buses, taxis and rental cars. We suggest using both ways to identify a registered taxi and always agree upon the price with the driver before getting into the car. 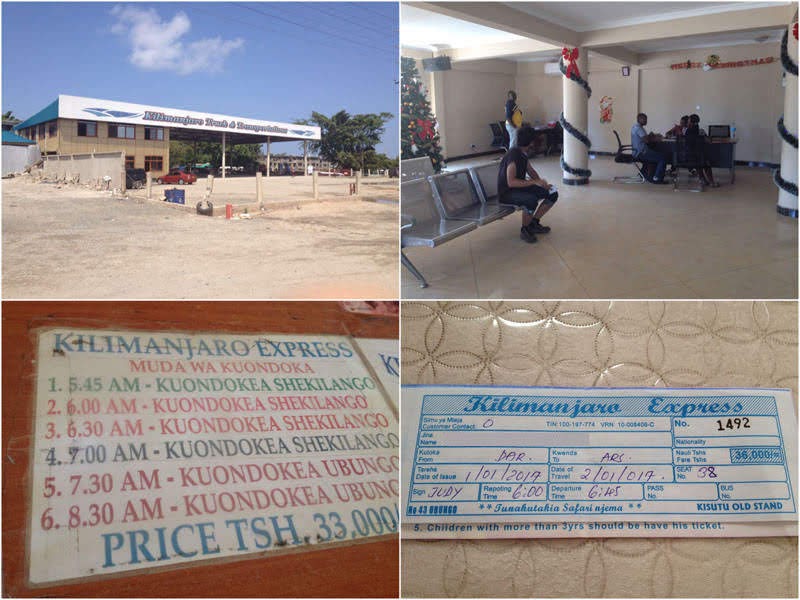 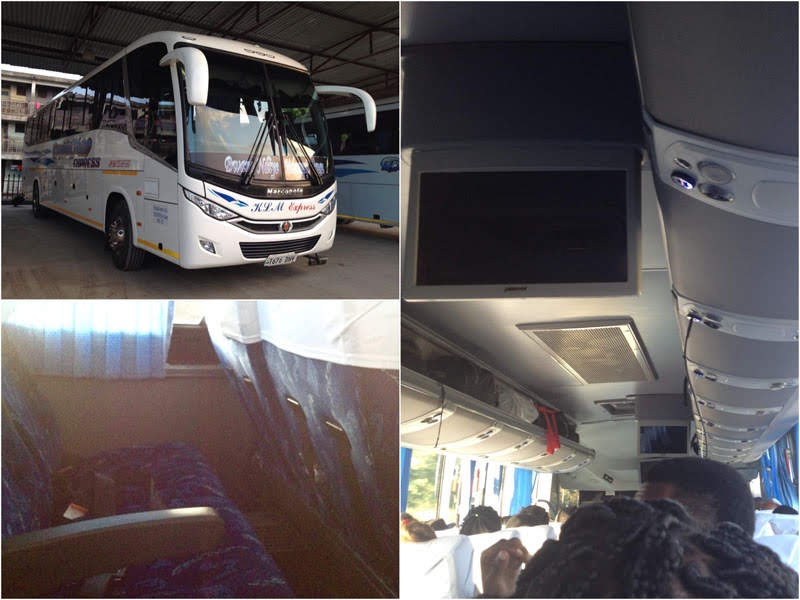 Amenities: USB port and wifi available in the bus. However on our way back to Dar es Salaam, the WiFi on that particular bus was not working as the bus company did not pay the monthly fees per bus attendant.

There were lots of buses at the terminal on the day of our departure but there were no numbers or signs indicating which bus to take. However the staff wearing the uniforms could check the tickets and help passengers to find their buses. The seats were not big but fairly comfortable.

Local music videos, TV shows and Hollywood movies were played during the ride in a local language. Some of the music videos were really interesting, which integrated African elements with western pop music and rap.

Once the bus left downtown, there were no traffic lights. However, the bus slowed down for checking points or while passing villages. The bus stopped at a rest stop for about 30 minutes. The rest stop had two food stands. One provided various options of set meals. The other one was a hot food station which provided rice, noodle, vegetables and meat. For the hot food station, customers had to buy a ticket at a counter first and then go to the station to get a plate. Staff scooped food for customers and customers could always ask for more until the whole plate was full. The pasta and beef stew were delicious. We shared one plate for 7,000 TZS. Other than hot food, there was another station for pastry and juice. 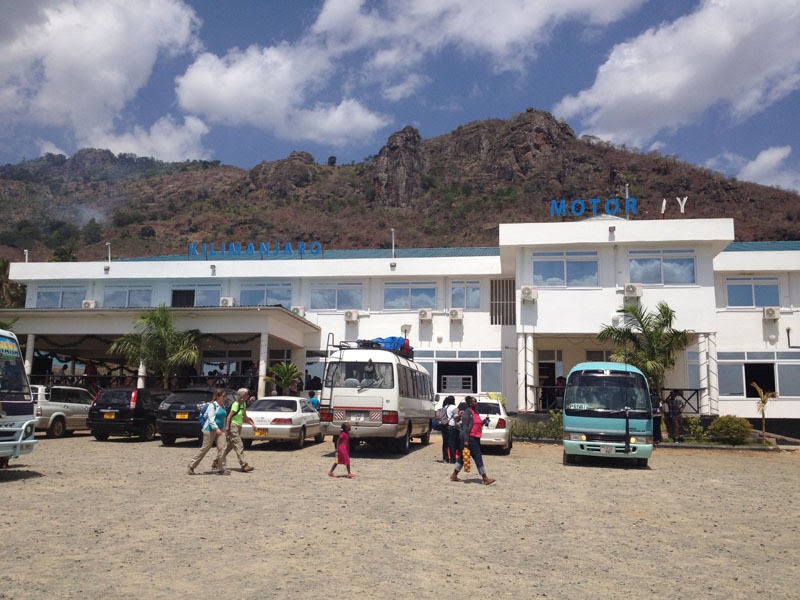 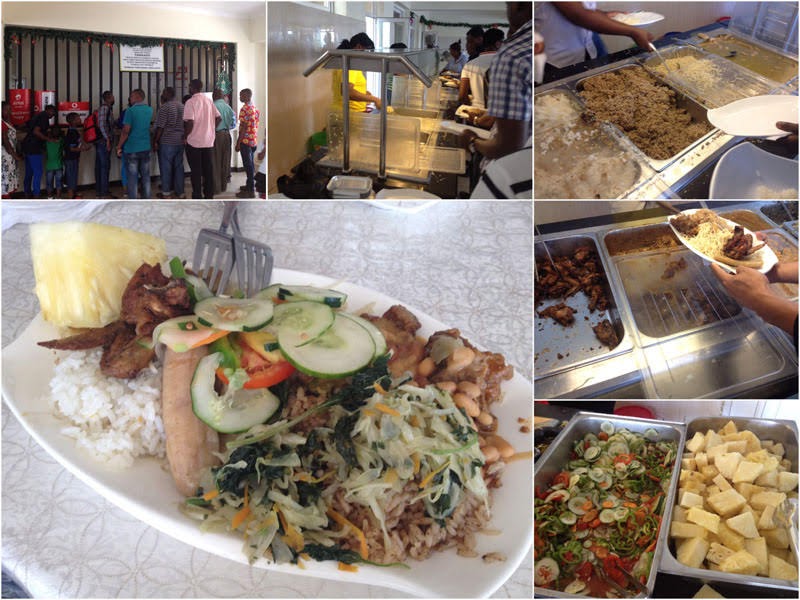 Before each bus departed, an announcement was made at the rest stop. During our bus ride from Arusha back to Dar es Salaam, we were not sure if our bus was leaving from the rest stop so we went to the counter at the rest stop to confirm. The staff was very friendly and even came to give us a heads-up before she made the departure announcement for our bus.

The restroom at the rest stop was clean in general but did not provide toilet paper.

There were some food stands at the bus terminal selling food to passengers waiting for the buses. We did not try these. 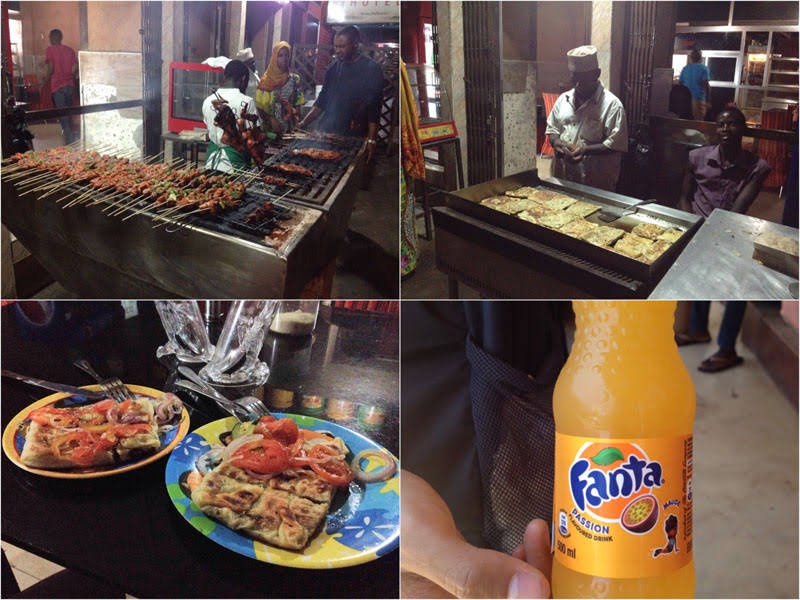 It was located about a block away from Kilimanjaro Backpackers Hostel.
The chef cooked on the street but there were a few seats inside. A tanzanian pizza at this restaurant was different from the ones we got in Zanzibar but it was very delicious and only cost 1,000 TZS each, served with pickled vegetables . We came to this place a few times and also tried the beef skewer. It was pretty good and cost only 500 TZS.

We had lunch at a restaurant right next to a tour company, Kili Climbers. The vegetables tasted good but the chicken was plain. It cost 4,000 TZS. 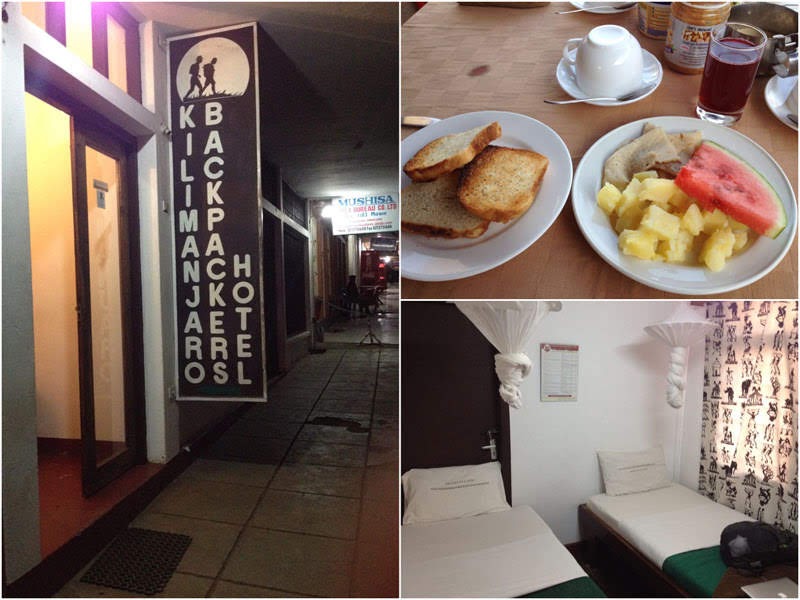 Location: Google Maps (the hostel name might be changed)

Payment: Cash only (credit card can be used when booking through the website)

WiFi: Available in common area on the first floor only. Usable but relatively slow.

Amenities: Soap was provided for each room. One restroom and one shower room were available on each floor. There were not very clean but acceptable for quick use. The water flow was not very strong. It could get chilly at night time and one time there was no hot water.

Meal: Breakfast was included and served on the rooftop. It included toasts, local bread, jam, juice and fruits. Pretty good as included breakfast.

It was a two-level building, fairly clean overall. The half-outdoor common area on the first floor had a few chairs and a small table. The hostel was located on the main street. However, the streets did not have lights so it got very dark after sunset.
The receptionist spoke English so was helpful to ask for some information.

The first night we stayed in a private room with two single beds on the first floor. It was at the end of the hallway so it got a bit noisy from the next building in the early morning. The room was not very clean but acceptable for a short stay. However the outlet in the room was not working so the staff let us changed to another room on the second floor.

There were a good amount of street food vendors. Unfortunately this is also where we got a scam.

After we left Chief Tours office on the first day we arrived in Moshi, a teenage boy came over saying he was Adidas’s (the owner) nephew and his mom made good local food that we could try for dinner. While he was talking to us, one of the staff, Johnny, from the Chief Tours office came to talk to him in local dialect, which made us think that the boy was related to people of the tour company. We did not suspect and just walked with him. He spoke good English and told us he had been to Kilimanjaro many times as a porter, while the food place was much further than what he told us. Finally we got to the place seeing a woman cooking and a few guys sitting at a few small tables. The boy served the food which did not look good at all and asked for 12,000 TZS. Later on, we shared this experience with the hostel receptionist and he said that should just cost 3,000 TZS. Next day when we went back to Chief Tours office, we saw Johnny again so we asked him about the kid. Johnny said he did not really know the kid, which was why he was wondering why he was talking to us. However he thought we knew the kid before so did not question more.

After exploring the wildlife, we moved on to the beautiful landscape of desert. Our next destination was Namib-Naukluft ...
2016.12.20