Our first landing on African continent as well as the first country of our long backpacking trip.

Our flight with Air France landed at Libreville in the evening on December 3, 2017. After we got off from the aircraft, the security guards led us to the counters for visa application on arrival. Although the flight was not full, it took about an hour for us to get out from the airport due to a long line at the counters. Once we lined up at the visa counter, an officer came to pick up our passports and it took about 30 min for us to be called to the counter. At the counter, an officer had our passports and we also handed our visa authorization form which was filled out and obtained online previously with 85 euros per person as the visa application and processing fees. Then the officer took our photos shown on the visas.
* To obtain the visa authorization form, you need to obtain contact information of a person who hosts you in Gabon. We reached out to the hotel and obtained the hotel manager’s name and phone number for the visa online process. 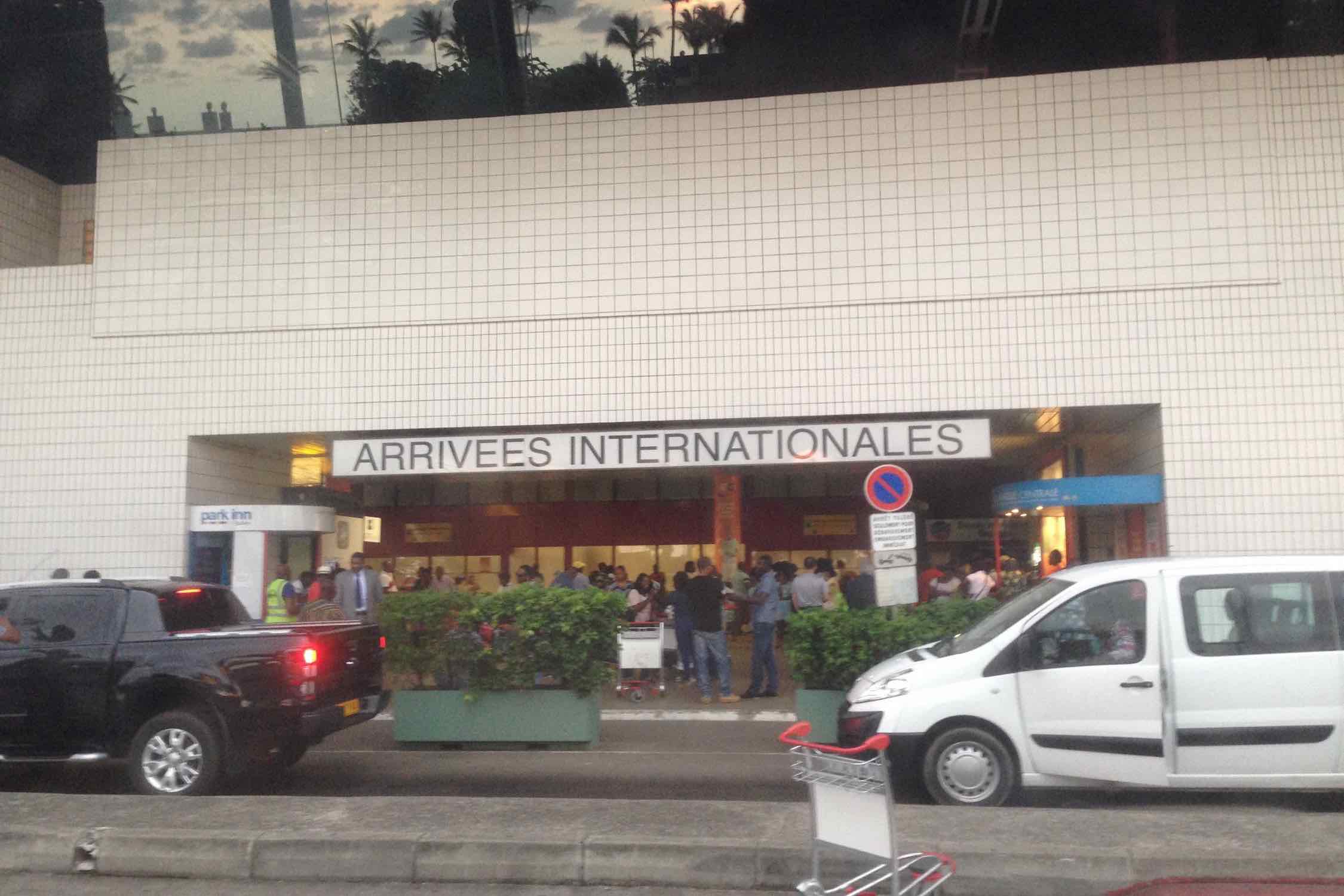 After picking up our luggage, we went outside to take a shuttle bus to a SPG hotel, Le Méridien Re-Ndama. The free shuttle was parked on a road across from the arrival gate. It should be easy to find a shuttle or transportation to the downtown of Libreville because there were a lot of drivers of cabs and shuttles outside of the arrival gate.

In the shuttle, a radio was played and the first song we heard was “Sorry” of Justin Bieber. Later we heard that America music was more popular than French music in Gabon. After listening to the radio for about 15 min, we arrived at the hotel.

The time we arrived at Méridien Re-Ndama hotel was already late evening. Since we did not know any tour or hotel in Lope where we planned to go the following day, we spent the rest of the day collecting the information about Lope. Also, the hotel helped us to obtained a SIM card for us to call some tour companies offering a tour to Lope. 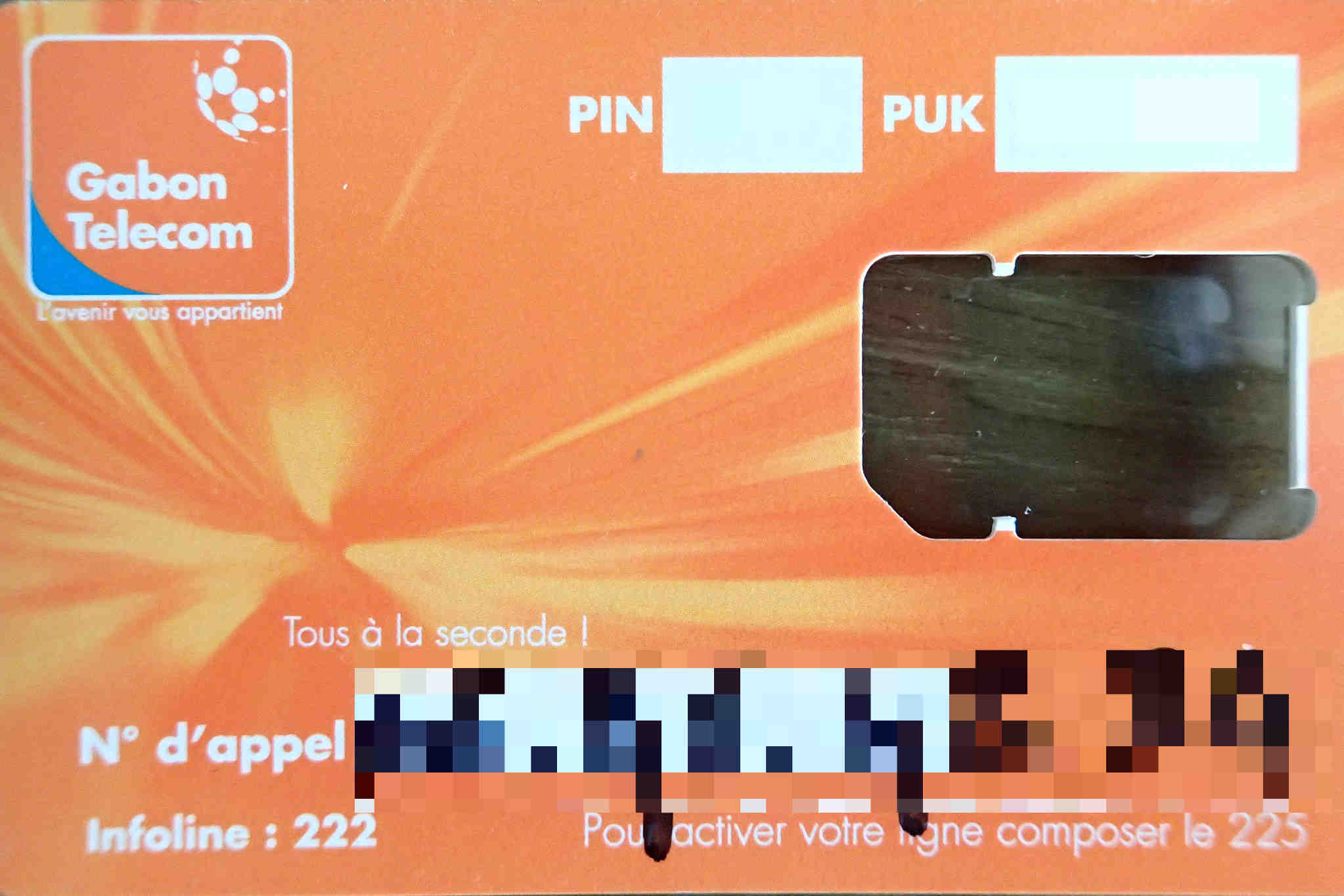 Long story short, the hotel had some information about downtown but not much about national parks because none of the employees at the hotel had been to Lope National Park. However, they gave us the train schedule to Lope for the following day and some phone numbers of the tour companies offering a tour to Lope.

Unfortunately we could not reach any of the tour companies as we arrived on a Saturday and the following day was a Sunday. It seemed only few stores and companies were open on weekends.

Since the train on Sunday was scheduled to depart at evening time, in the morning we took a walk around the area close to the hotel and looked for a tour company that opened on weekends. Unfortunately, all the stores and tour companies were closed except one supermarket. At the supermarket, we purchased some groceries in case of the limitation of food available in Lope. 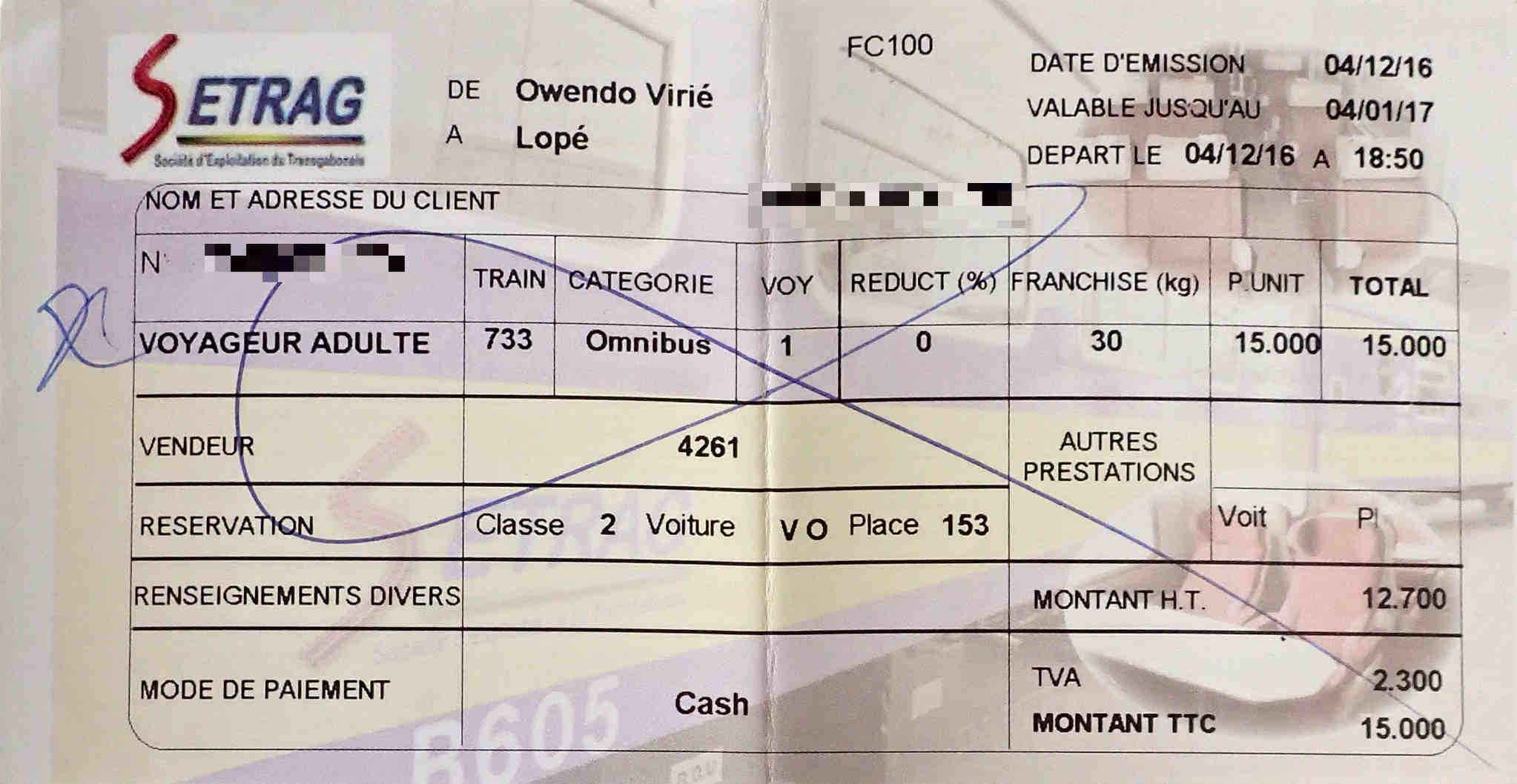 In the evening (2 hours before the departure time), we checked out from the hotel and took a cab to the train station Owendo to purchase the train tickets to Lope National Park. The ticket office was on the left side of the station and the information desk was on the right side. 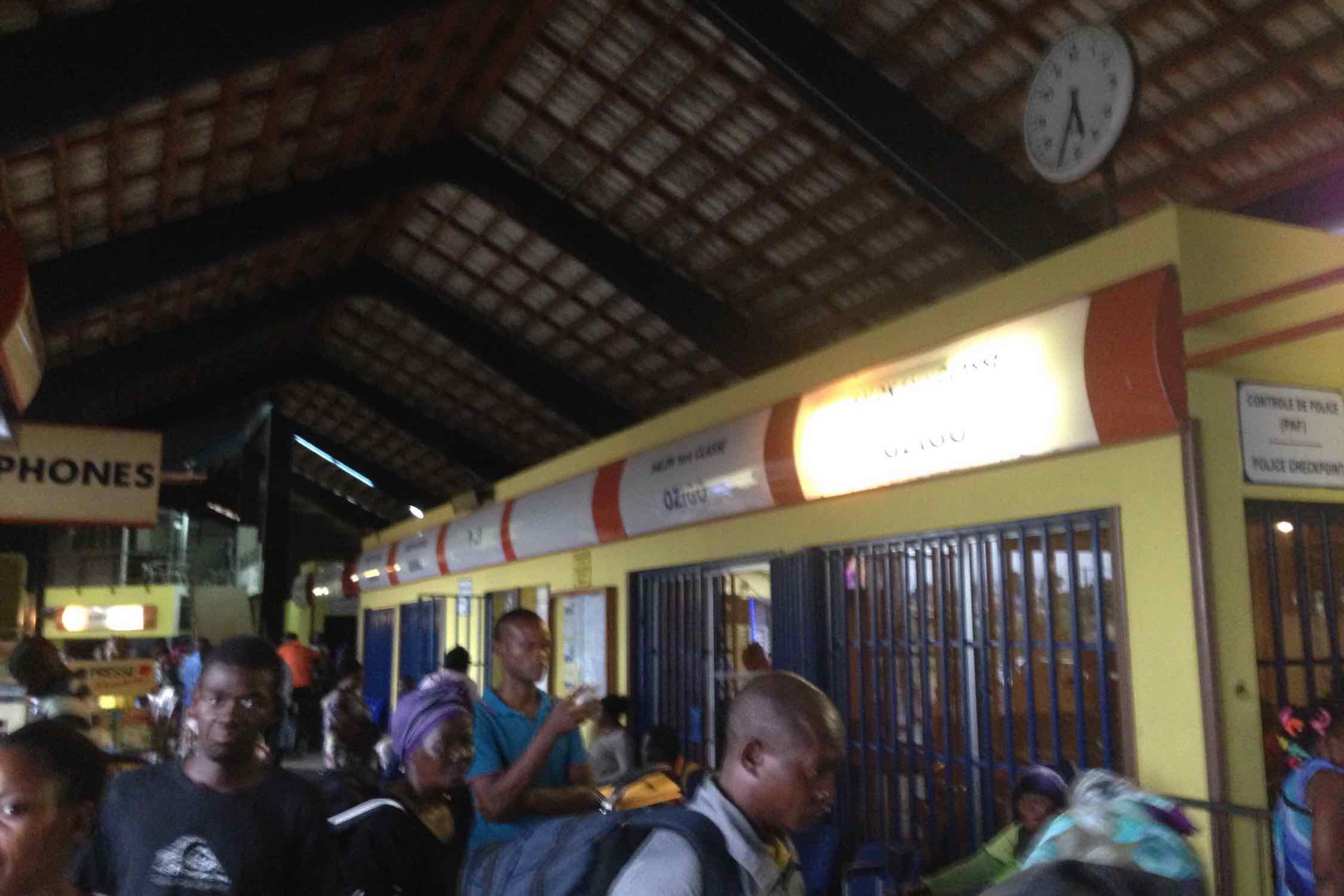 With assistance from the lady who spoke some English at the information desk, we filled out a form and got the 2 tickets from the ticket office. There are two types of trains: Train Express and Train Omnibus (local), and three classes of seats: Classe VIP (VIP Class), 1 Classe (1st Class) and 2 Classe (2nd Class). Each passenger has a assigned seat. However, there are limited available seats because the train only runs once in a day. When we first lined up at the ticketing office, we were told no available seats. Luckily, later we reconfirmed with the ticket officer and were able to purchase the tickets. We recommend to buy the tickets in advance at the ticketing office if possible. 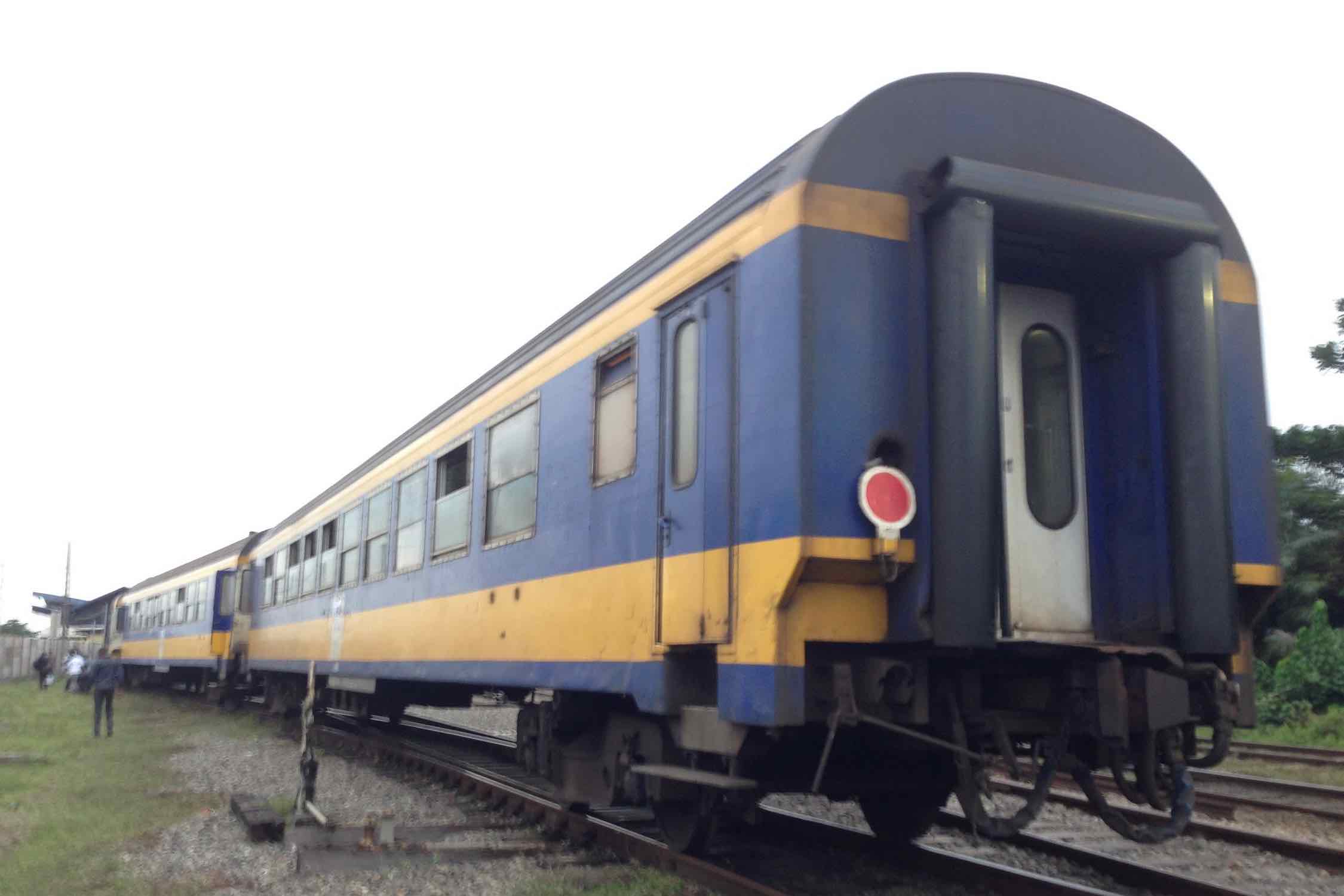 At the check-in time, an officer checked both the photo ID (we used passport) and the tickets before the passengers got into the platform. The train was much longer than the platform so it would be easier to get into a train car and walk to the assigned train car. The train left on time at 6:50pm. Our train car had a bathroom but we did not use it due to the strong smell. There was no A/C in our car but the train ran at night so it was pretty cool with open windows. After confirming with other passengers (seemed all local people but some spoke a bit English), we started walking toward front when the train got closer to Lope station. Probably because it was a red-eye train, lots of people slept on the floor in the 2nd Class cars, while the 1st Class remained clean and organized. We recommend to buy 1st Class tickets unless you are really on an extremely tight budget. As a first-time traveler in Africa, we had a hard time to sleep in the train because of the smell from bathroom and bugs on seats. 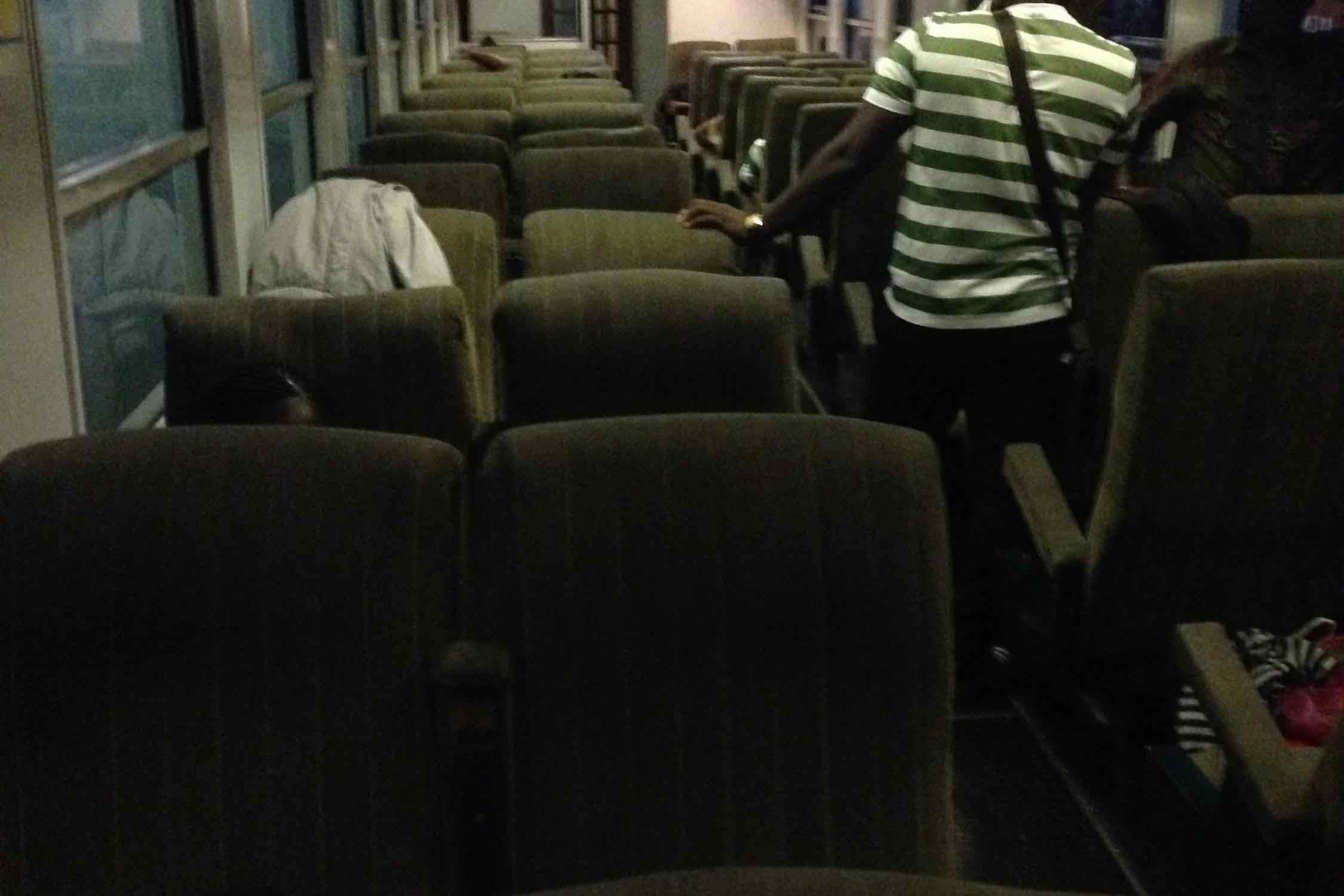 The train was scheduled to be at Lope at 1:40am but due to delay we arrived around 3am. There were a few officers at the train station and no lights at all other than the station itself. Without maps, hotel reservations and any contact info, one of the officers was very kind and made a call to the Lope Hotel for us. Later on a person driving 4×4 came to pick us up to the hotel. We met with the hotel manager outside of the lobby. There are two types of rooms within the hotel, 73,000XAF and 65,000XAF per night with access to swimming pool, and annex for 25,000XAF per night. The hotel accepted cash only and there were no ATM in the village. We decided to stay at Annex and thus the driver drove us to the other side of the train station where the Annex was located. Since the hotel also offered a tour, we were told to contact them the following day again to arrange a tour in Lope National Park.

WiFi: Not included. But it was included if you have a Gold status or above at SPG. However, the browsing experience was not smooth.

Meal: Breakfast was not included. But it was included if you have a Gold status or above at SPG.

The room was clean with a king-size bed. However, compared to SPG hotels in other countries, the room is dark and not as clean.

* The tables of time and prices above were made based on the following photo which was obtained in December 2016. 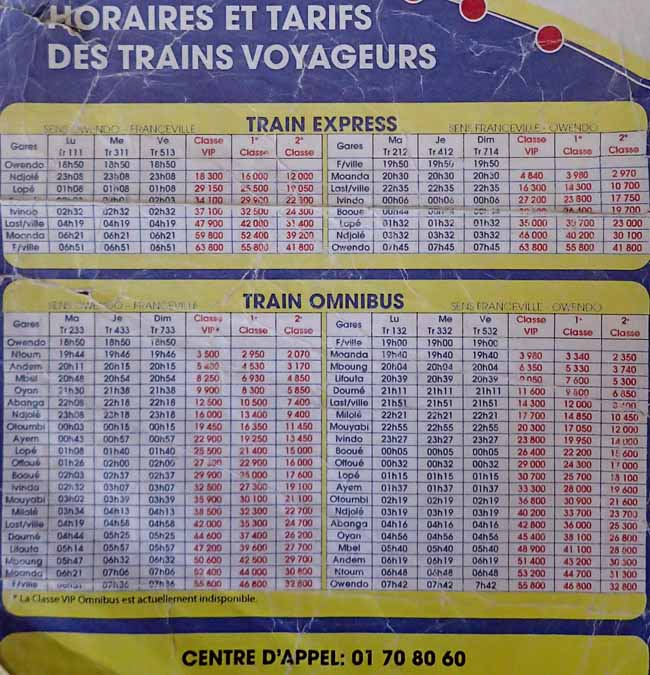