We moved on to the greatest water falls in African continent after enjoying the deep nature with wild animals. Due to the difficulty to pass by the countries around Gabon all the way to Zimbabwe, we chose getting on airplanes to skip all the hassles of crossing borders. To go to Victoria Falls airport from Libreville, Gabon, a transit at Johannesburg, South Africa was required. 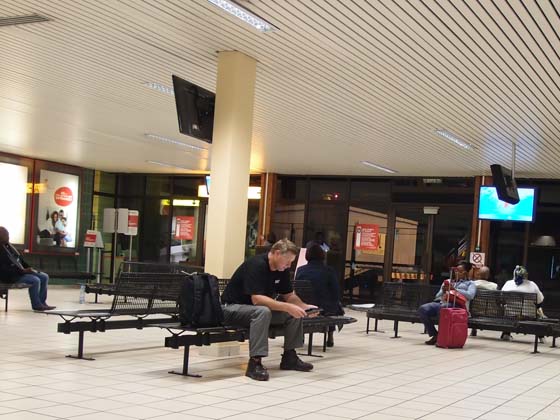 Inside of terminal at Libreville airport

After 3 hours of waiting outside of Libreville airport without A/C, we were finally allowed to enter the terminal building around 11:30pm for check-in. Due to the late night flight, all the stores in the building were already closed when we got in. However, A/C made us comfortable until the boarding time. Our flight departed from Libreville at 0:40am on time and arrived at Johannesburg airport at 6:45am. Due to early morning the weather was pretty cool when taking the shuttle bus to the terminal from the aircraft. For the transfer, there was a long walk all the way to the international terminal for immigration for international transit and security checks. Since we did not have a chance to take a shower from the morning of the previous day, we went to Bidvest Premium Lounge which had shower rooms, food and drinks. Thanks to our Priority Pass cards, we enjoyed relaxing time for 2 hours with free showers and breakfast for free until the next flight to Zimbabwe. See the following Airport Lounge section for the detail about the lounge. 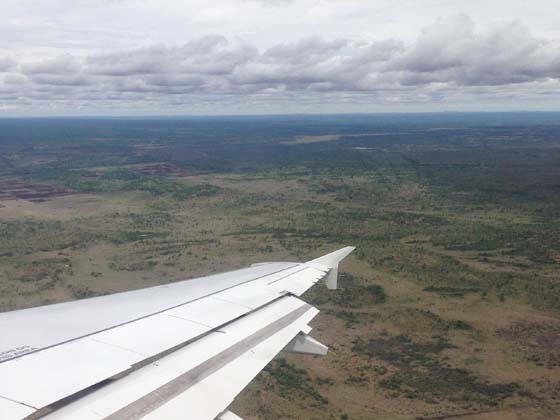 View of Zimbabwe from the airplane

Our flight to Zimbabwe was scheduled to depart at 10:50am. Around the boarding time, we arrived the at boarding gate as indicated on the flight information board. However, the flight got delayed and there was no information when the gate would open. After waiting for half an hour in front of the gate, we suddenly realized that the boarding gate was changed on the flight information board. We confirmed with an airport staff at the original gate of our flight and were told to run to the new gate which was at the other side of the terminal, completely opposite to the original gate. After running for about 10 min in the terminal, we found the new gate but no body was there, not even an airport staff. The gate also did not show any flight departing from the gate. With a lot of confusion in our mind, we ran back to the original gate to find out what happened. Still all staff did not know what was going on for our flight but at least we found some passengers who were on the same flight at the original gate. After another hour or so, our flight finally started boarding at the original gate and we safely got on board.

In the aircraft, something interesting happened again just like when we were at the airport. Long story short, flight attendants gave our seats (as they thought our seats had extra leg room which was not true) to other passengers who paid extra for the extra leg room and asked us to wait in the back of the aircraft until all passengers were seated and flight attendants figured out which seats were available for us. We ended up sitting separately because no two seats in the same row were available after all other passengers were seated. Waiting in the back of an aircraft reminded us of taking a subway in New York without any assigned seats. Even though the experience was not pleasant, the airline company provided us with flight credits more than what we paid in additional to our mileages used for this flight. 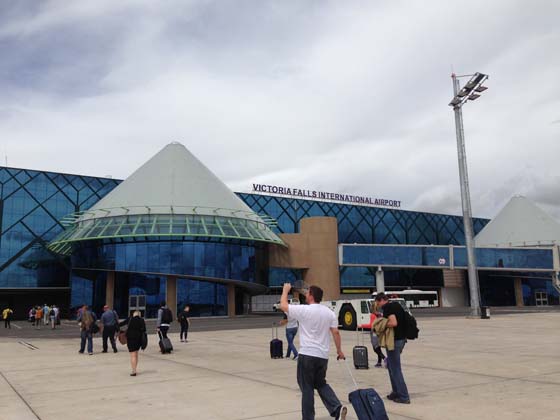 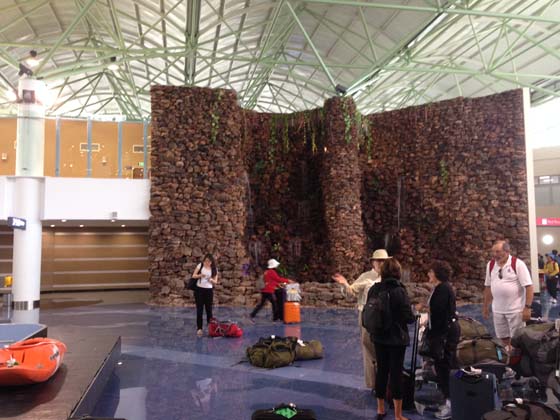 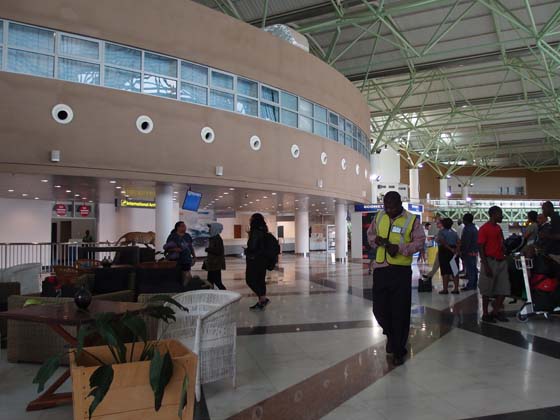 Regardless of those interesting experiences, we safely arrived at the Victoria Falls airport around 1:00pm. Because the airport was small (but new and clean), all passengers were required to walk to the terminal from a aircraft. Most passengers were travelers and made the line at the customs quite long. At the custom, we handed only our passports and arrival visa fees as no other documents were required for the arrival visa. It took us about one hour to finish the process and pick up luggage to get out from the terminal.

After passing the custom, we were able to withdraw some cash from the ATMs right outside the international arrival gate with the help from a security guard who was pretty nice and friendly. He also introduced us to his friend who was a taxi driver.

The road from the airport to the town was paved and well maintained. However the driver informed us that there could be wild animals including carnivores in the area between the town and Victoria Falls airport. In the area, there were no fences along the road so he suggested not walking on the road. We arrived and checked in at the Shoestrings Backpackers where we made a reservation online in advance. 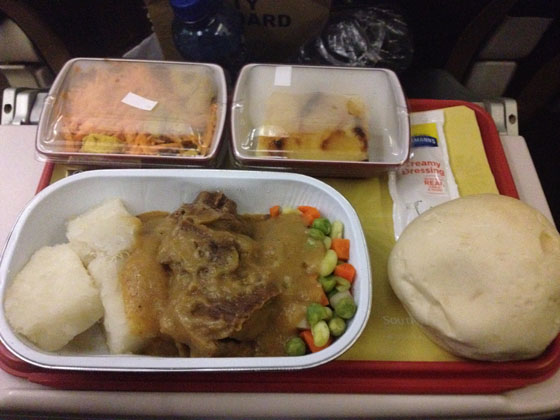 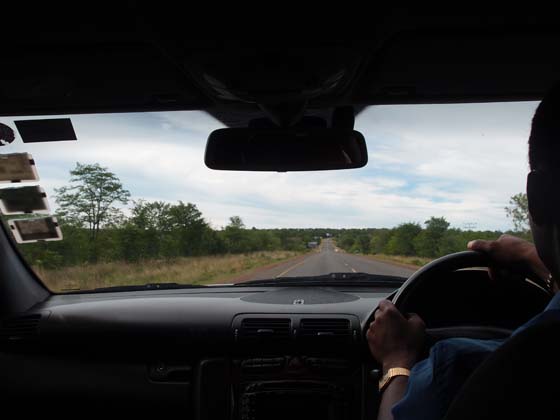 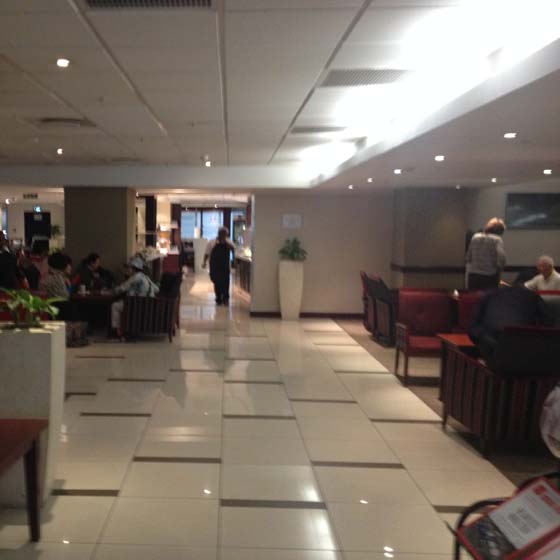 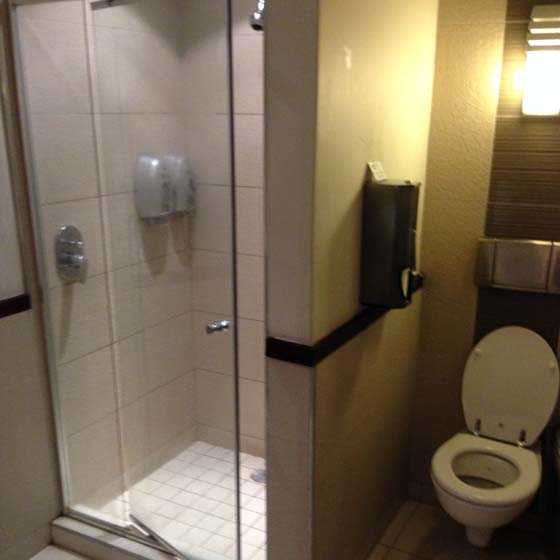 Food: Food was provided during our stay, including bread, pastry, hot food, salad, yogurt and fruits, as well as juice, coffee, tea and bottled drinks. A water fountain was available for water refill.

Overall it was very comfortable staying at this lounge. The food was good and the shower rooms were clean. There were a good amount of tables and seats, including some sofas where some travelers could take a nap. A number of outlets were available as well.

Dead Vlei is always shown up when searching for the most beautiful and breathtaking places in Namibia. We now moved on t...
2016.12.15
Home
All Trips
2016 Dec: RTW Trip