On January 9, we came back from the 6-day Kili trip. We were very exhausted but still seized the time to find a tour to Ngorongoro and bought the Kilimanjaro Express bus tickets back to Dar es Salaam.

We participated in one of the group tour to Ngorongoro on January 10. To ensure we could meet with the group on time, Johnny, our tour coordinator, and a driver came to pick us up from Kilimanjaro Backpackers Hostel at 4:30am. We passed by a few check points and Johnny spoke with the officers quickly without any issues. Around 6am, we arrived at a hotel in Arusha. We moved to an SUV and got on the road with another 4 Swede to pick up an Australian from Arusha Backpackers Hostel. Meanwhile we dropped off our large backpacks at the hostel as we would stay here for the night.

Around 8am, we arrived at a lodge with a campsite and dining area to meet with other people for the same tour. The lodge was located in a village. It took a while for a manger to rearrange the seats for all the guests into the 4×4 cars and we finally got on the road around 9am. It took about an hour to Ngorongoro Conservation Area. After we left the village, it was mostly wide plain view but we did not see any wild animals.

Ngorongoro was well known for its crater, a large volcanic caldera. This natural terrain formed a great environment for wildlife with its own life cycle and food chain, which also created a spot easier to see all the “big five game” in Africa (lion, leopard, rhinocero, elephant and Cape buffalo). Upon arrival, we stopped by a view point, where we got an overview of the whole crater which was spectacular and beautiful.

On the way heading down to the crater, we started seeing Maasai, and some of them approached our car trying to sell some art crafts. No one in our group intended to purchase. However, one of the guests took pictures of the Maasai without asking and the Maasai started asking for money, so the guest paid a few dollars to them. 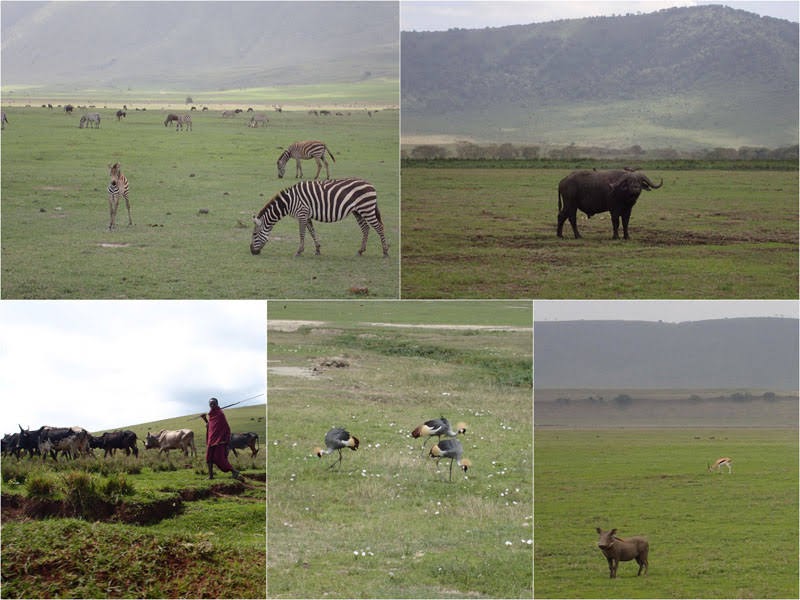 Around 11am, as we drove into the crater area, we saw 3 large elephants walking across the drive route. During the tour, we also saw a few black rhinos. Although they were very far away from us and we could see them only through the telescope, we were still very excited, knowing their head count was decreasing and currently there were only about 20 in the crater. Another great highlight was a group of 4 female lions lying down on an open green field. They were very relaxing and ignoring us the whole time, so we were able to observe and take lots of pictures of them from just 3 meters away. 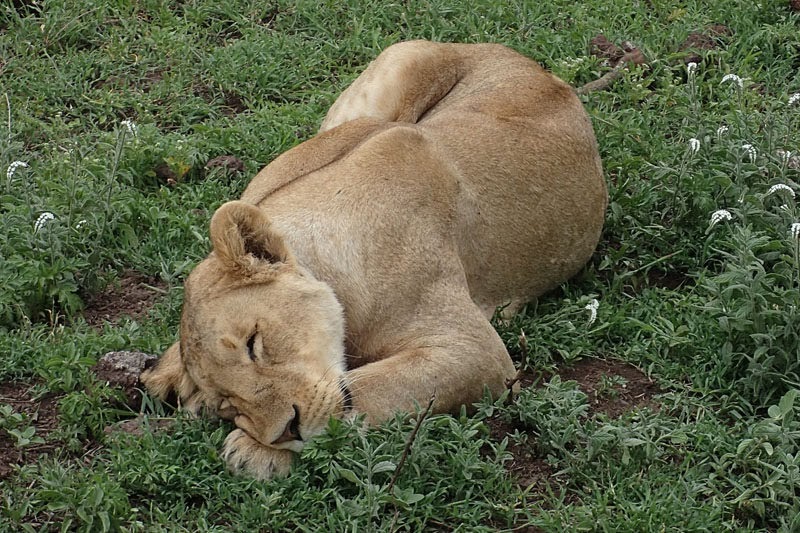 By 2pm, we arrived at a pond and lots of cars also parked nearby for all the guests to take a lunch break. A Great White Pelican that came right after soon became a focus of lots of travelers. After 30-minute lunch break, we got back to the tour. Toward the end, we ran into a group of elephants, including a baby. They were first drinking water and then slowly walking by the cars so we got to observe them very closely, really amazing. 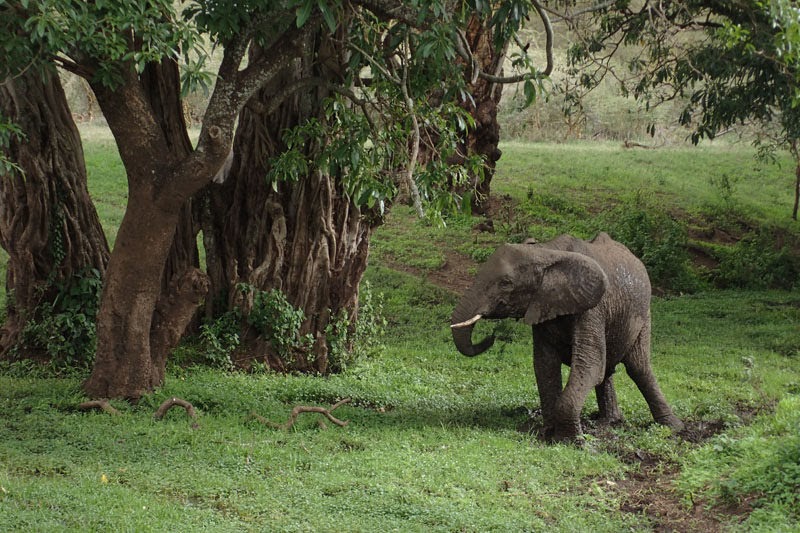 Below is the list of the animals observed during the tour: 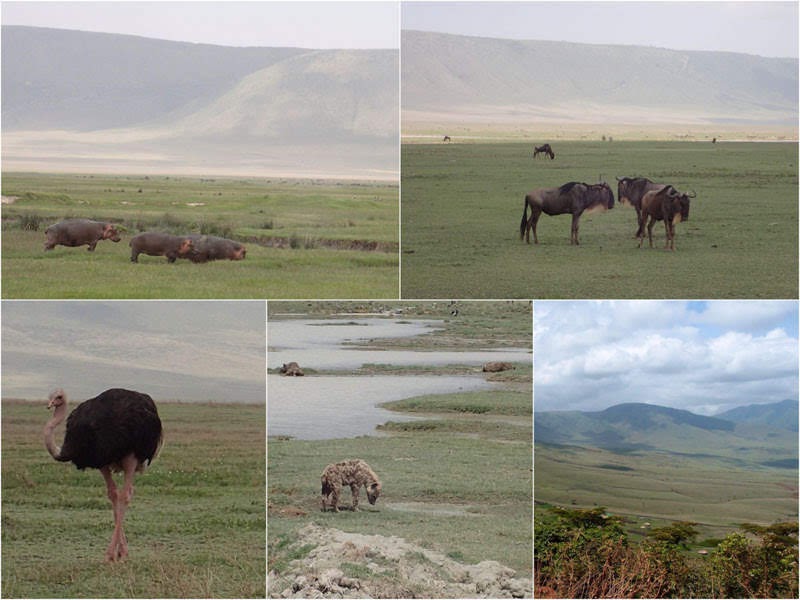 Around 4pm, we started heading back. We took a quick restroom break at the gate, and in about an hour our group was split and we were told to move to another car with other guests who were also going to Arusha. By the time we arrived at Arusha Backpackers Hostel, it was all dark, but there were still lots of people walking on the street, even though there were not many street lights other than on the main street.

Maybe because we had camped, taken long distance-buses and also spent a few days in Kili, the very first time since we started our trip we would like to get some Asian food. We searched online and found a Japanese restaurant but unfortunately the taxi driver told us it had been closed for a while. Thus we went to a Chinese restaurant for dinner. Then the same driver drove us back to the hostel. As we had another long-distance bus ride in the early morning, we just took shower and went to bed after we got back to the hostel. 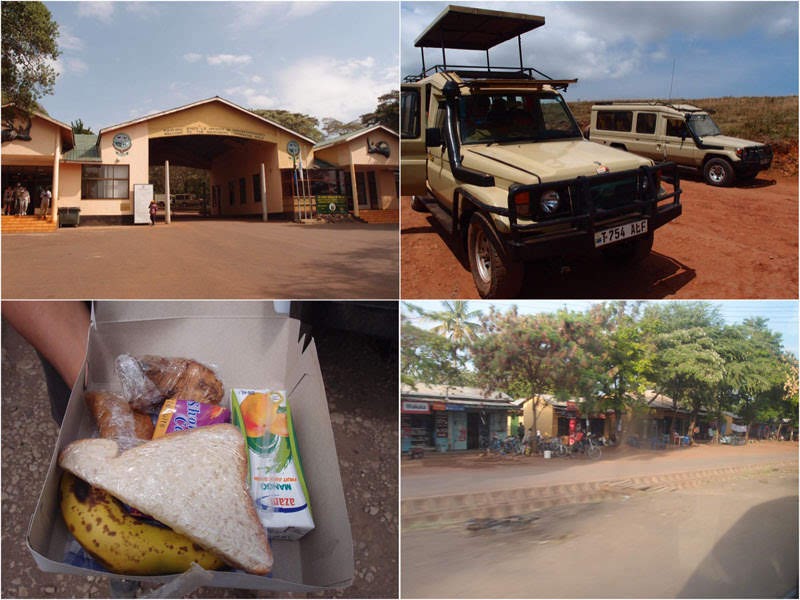 Price: 872,000 TZS / person, including lunch and transportation to the Conservation Area and back to accommodation

We met Johnny at Chiefs Tours office in Moshi (where we scheduled our Kilimanjaro trip). After he found out that we were planning to go to Ngorongoro, he coordinated with some local tour companies and put us in contact with one tour guide, Gody. The price included the ride from Moshi to Ngorongoro, lunch in the park and ride from Ngorongoro to Arusha. The safari driver also served a tour guide.

We paid off the tour to an agent who worked for Gody in Arusha. To avoid any potential issues, we also asked for a written receipt and got on a phone call with Gody using Johnny’s phone. From the beginning to the end, we never met Gody in person. The tour was fairly good, just with some minor issues. It appeared that the guests in this tour were brought in by various tour agencies, so it got unorganized when we all met up at a lodge in a village which was about an hour-drive from Ngorongoro. A manager there did not know clearly the package provided by each tour agency so he could not arrange the breakfast to the guests as applicable, and he was unable to properly arrange the seats in the 4×4 cars as most guests were told by their agencies that there were all window seats, which was not true. Luckily, it was a great group and people were very nice not caring much about the seats (or, possibly we all just wanted to go to the Park, not wasting more time at the lodge).

The guide did not speak much English so the introductions about Ngorongoro were very limited. However he did try to show and introduce various types of animals to us. At the end, we paid him 10,000 TZS as tips.

This taxi was arranged by the hostel. Initially we planned to go to a Japanese restaurant but the driver told us it was shut down for a while, so we went to a Chinese restaurant. It was not easy to hail a cab on the street so the driver stayed outside of the restaurant and sent us back to the hostel after we finished dinner. 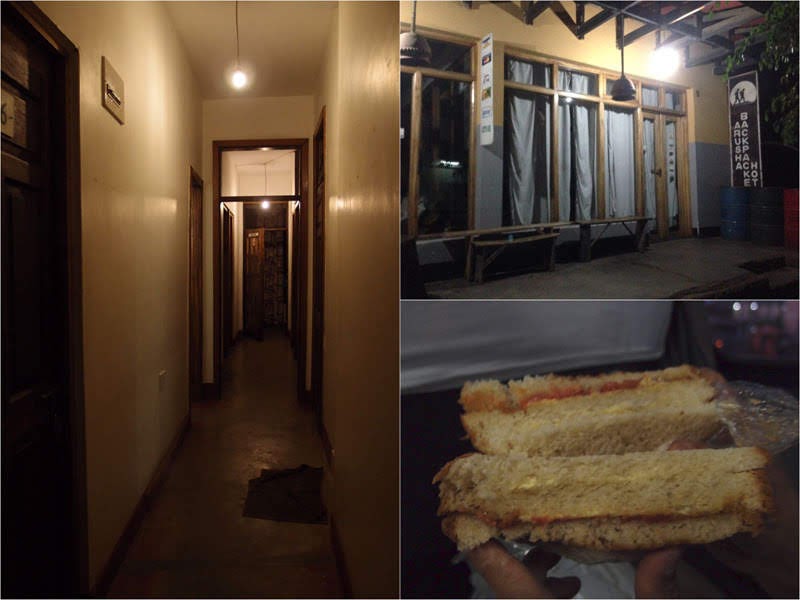 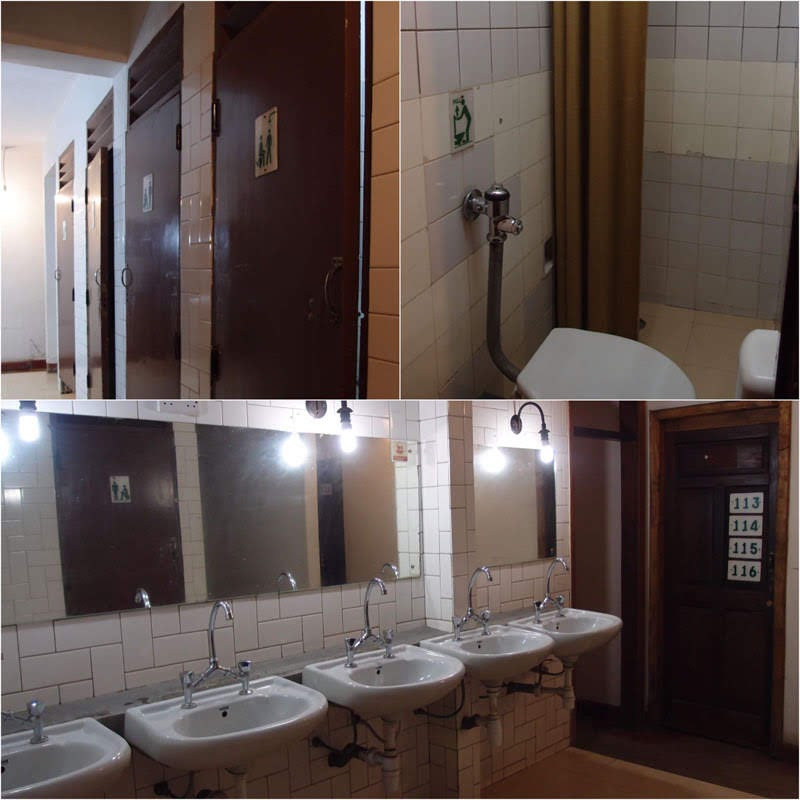 Meal: Breakfast was included. Since we had a long-distance bus to catch next early morning, we discussed with the receptionist and they packed breakfast for us in a black plastic bag. It included toast with jam and peanut butter as well as watermelon in a plastic wrap. The toast was good but the watermelon made the bag messy unfortunately. However we really appreciated they prepared these for us.

Wifi: Yes, but only in the common area in the lobby and the restaurant / bar at the top of the hostel

As this hostel was operated by the same group of the Kilimanjaro Backpackers Hostel in Moshi, the facilities were similar. The first floor was mainly reception and a common area. All the guest rooms were on the 2nd and 3rd floor (stairs only), and each floor had a few shared washstands and bathrooms. Our assigned room was on the second floor. The room just fit two single beds and a tiny table. It was relatively dark in the hostel. Although the bathrooms were very bright and were not really dirty but the layout seemed old and somehow a bit intimidating.

The restaurant had a good amount of seats with a pretty nice layout but we did not have any food here. 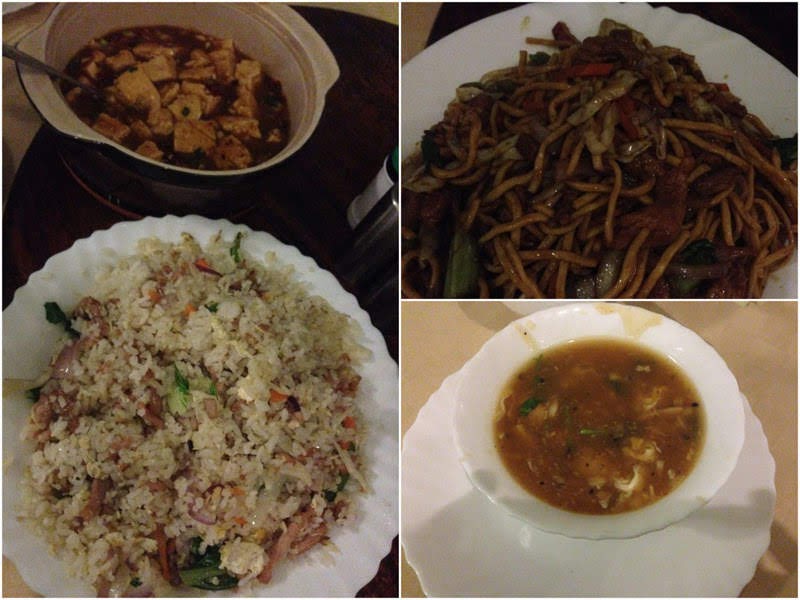 The layout was a typical traditional Chinese restaurant with about ten tables and they had a big menu. The service was nice and the food was good. We shared a hot sour soup, mapo todu, pork fried rice and beef fried noodles, totally 36,200 TZS.

Moving from Antananarivo to Morondava

Moving from Antananrivo to Morondava On December 25, we packed our luggage and checked out from Madagascar Underground ...
2016.12.25

Elephants walked on a beach and swimming on a shore of the Atlantic Ocean. During the research of destinations for this ...
2016.12.09
Home
All Trips
2016 Dec: RTW Trip