In the morning, we took a quick shower, packed our luggage and took a pedicab to the taxi brousse terminal to go back to Antananarivo. The pedicab driver was very friendly and put our big backpacks on the top very quickly. In about 20 minutes, we arrived at the terminal. Then the staff from SONATRA company came over, leading our driver to a minivan and loading our luggage to the top of the minivan. We got some time before the departure time of 8:30am, so we went to a little store near the terminal to buy some pastry as breakfast. 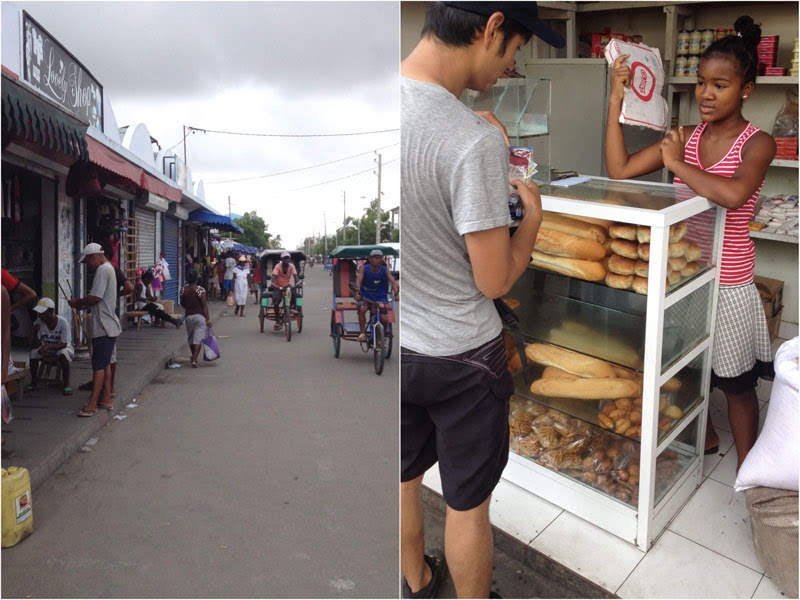 It started raining when we got back to the terminal, so most passengers were standing in the little house (SONATRA ticket office) while the staff was still loading bags in the rain. As these small houses were built a bit higher above the ground, no water flew into the office. The rain turned the terminal into a big pond, and two little girls holding an umbrella from Disney movie Frozen were stepping in the water while lots of litters were flowing by. It rained very heavily and the driver moved the car to the front of the small house so that all the passengers could got into the car without getting wet. The taxi brousse left at 9:10am.

From Morondava to Antananarivo

We bought the taxi bousse tickets two days ago and we got the first row seats, right behind the driver with more space. A lady with two kids sitting behind us put a live chicken underneath our seats so it got a bit smelly in the car. The chicken also groaned sometimes. Luckily after the car made the first stop, she handed it to the driver to put it on the top of the car. While the driver was loading more luggage, many street vendors holding boxes and plates came over to sell food through the car windows, including fried chicken, sandwich and fruits. 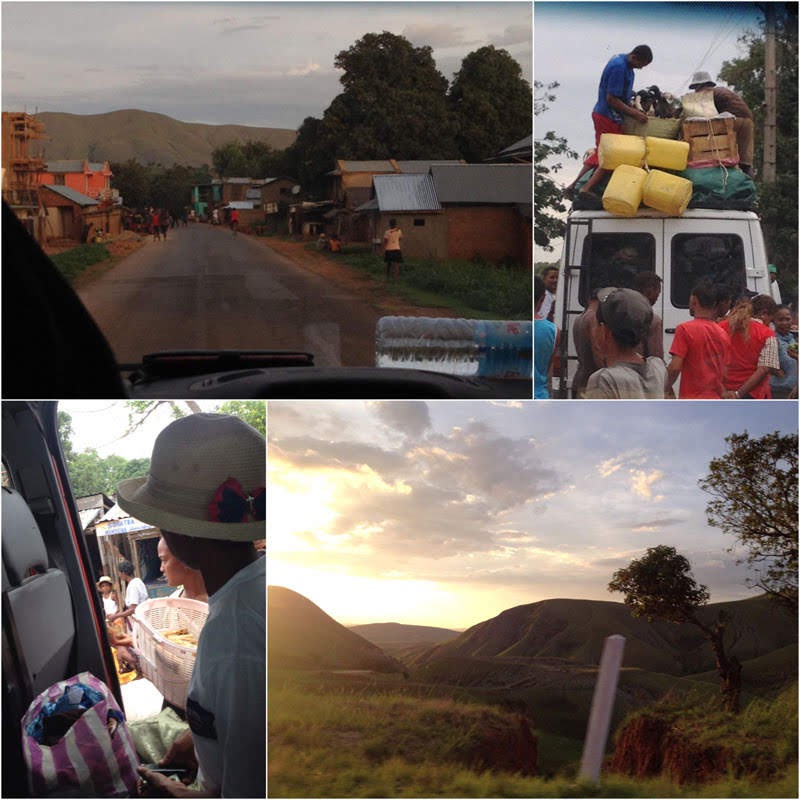 This ride going back to Tana stopped at more local stops than the ride from Tana to Morondava and it took a while to unload and load luggage. During the waiting time in the car, we got to observe the people and village around. At one of the stops we saw a family of nine taking a break under the tree shadows outside of a house. A big bother used a wood plate and two yellow plastic containers to make a bed for a nap, but he fell right away since it wasn’t stable. He was laughing so were the passengers in the car. He remade it quickly, put on a blanket and held one of his little brother to take a nap together. When the car got back on the road, all the kids smiled and waved to us.

Around 10pm, we arrived at a village with a few restaurants. We checked around, went into one of them and ordered a beef noodle soup (Zébu soupe speciale), which was surprisingly delicious! One of the waitresses was very friendly and chatted with us in English. We didn’t see any flies in the restaurant and the kitchen was fairly clean. 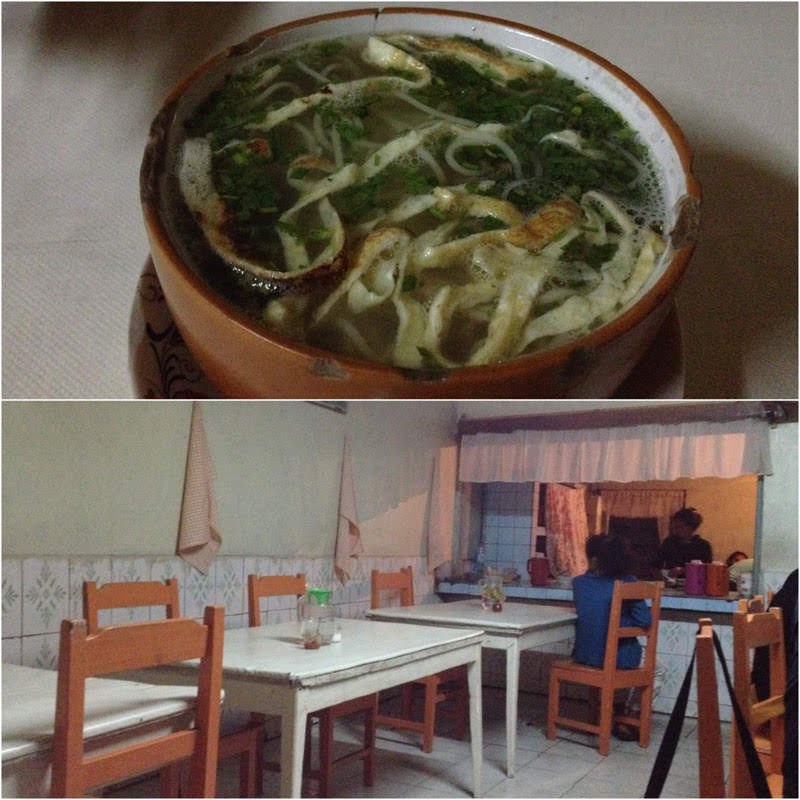 We arrived at Tana around 2am on December 29. The terminal was so empty and quiet, only 2 taxi brousse and a few taxis. Like when we got to Morondava, some passengers started making their beds in the minivan to sleep until sunrise. We did not have any reservation but since Madagascar Underground hostel opened for check-in anytime, we decided to go there again. Our driver pull really hard to get our big backpacks from the pile of luggage at the top of the minivan while another guy came after to help a bit and asked us for tips.

We took a cab to the hostel. When we arrived, the hostel was all dark. The driver was nice and went knock the door for us. A guy came out so we were able to check in to the dorm. The weather was cool and comfy for a good sleep.

Pedicab from Trecicogne Hostel to Taxi Brousse Terminal in Morondava 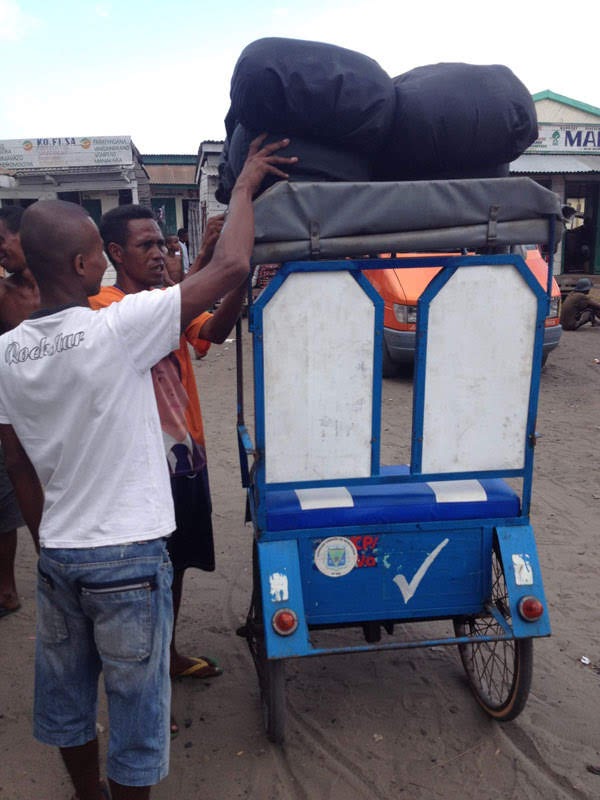 Lots of them gathered on the main street outside of the taxi brousse terminal, while a few also appeared in local streets. The price was based on negotiation. 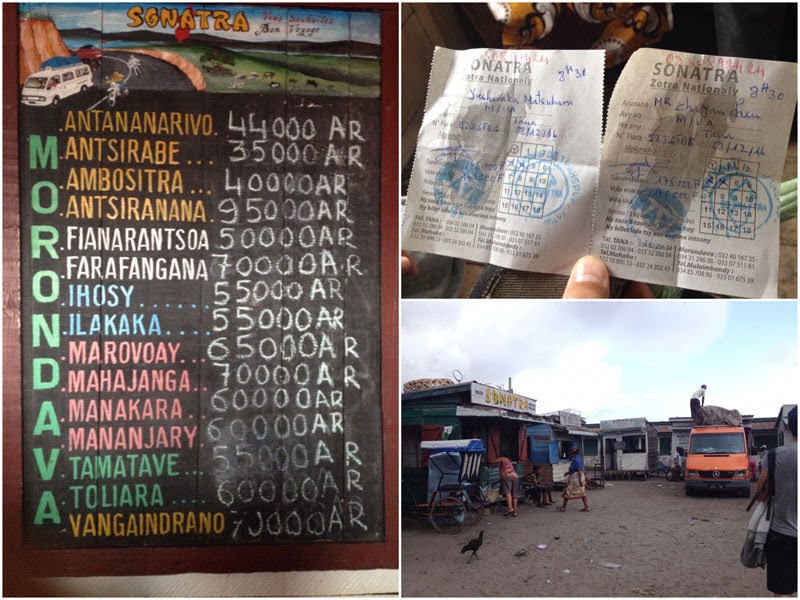 Trip time: 17 hours, with a few local stops and 1-hour break for dinner

The layout of the terminal was very similar with the one in Tana but much smaller with less taxi brousse companies. There were lots of stores and street vendors surrounding the terminal, while the environment was not clean in general. Similar with what we did in Tana, we asked the companies one by one to find the cheap tickets.

At one of the local stops, we bought a cream soda for 2,000 MGA but it was warm, which was common as most of the villages did not have refrigerators. Even if they had, most of the refrigerators were not turned on due to limited electricity.

During the dinner break, we had a beef noodle soup (Zébu soupe speciale) for 3,000 MGA, which was surprisingly delicious.

In Morondava, there were lots of stores near the taxi brousse terminal. We bought some pastry at a small shop for 1,500 MGA.

Refer to post Antananarivo, Madagascar I for further details.

After Chobe National Park, it was time for moving to Namibia, "Land of the Brave", which possessed more safari exposures...
2016.12.15

Gabon, the first African country we landed for our backpacking trip. The trip of rich nature of Africa was just begun. ...
2016.12.03
Home
All Trips
2016 Dec: RTW Trip