The time in a country with great and magnificent natures just ended, and now it is time to move on to a country famed for its uniqueness, Madagascar! Baobabs that the Little Prince needs to dig out everyday, lemurs jumping around, and other unique nature and animals are waiting for our visit.

As we had an early flight at 6:40am, we reserved a taxi through the hotel reception the day before. We planned to leave from the hotel at 4am and the taxi driver came on time.

Upon checking out, the receptionist was not familiar with charging points for the stay, and it took more than 15 minutes for us to make the payments for both our stay (tax portion) and the taxi. It is recommended to make all payments a day before check-out to make the process quicker.

The taxi driver was fairly nice. He not only tried to help the receptionist to check us out but also drove faster to get to the airport on time as we planned. On the way to the airport, it was completely dark because there were no street lights outside of the city area. 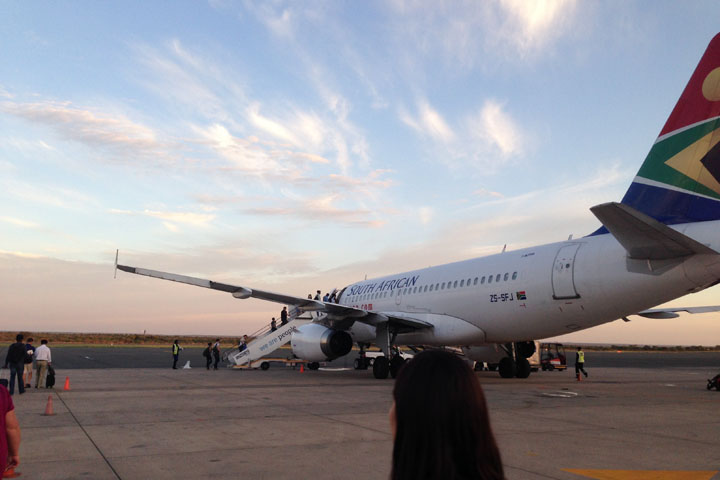 The airport was not big but fairly new and clean. Fortunately, the line for flight check-in was not long and the process went smoothly. After the check-in, we had a breakfast at a seating area before security check since there were still some extra time until our boarding time.

The entrance for the security and custom checks was pretty small and only one line  to get in but not hard to find as the sign was clear. All the passengers were asked to filled out a departure form before the checks. Forms were available right after passing the first small door. The security check went smoothly as well because  we had an early flight. After the security check and custom, there were several gift shops and we spent time checking the stores until the boarding time.

The flight to Johannesburg, South Africa departed at 6:40am as scheduled, and our first exploration to Namibia just ended. 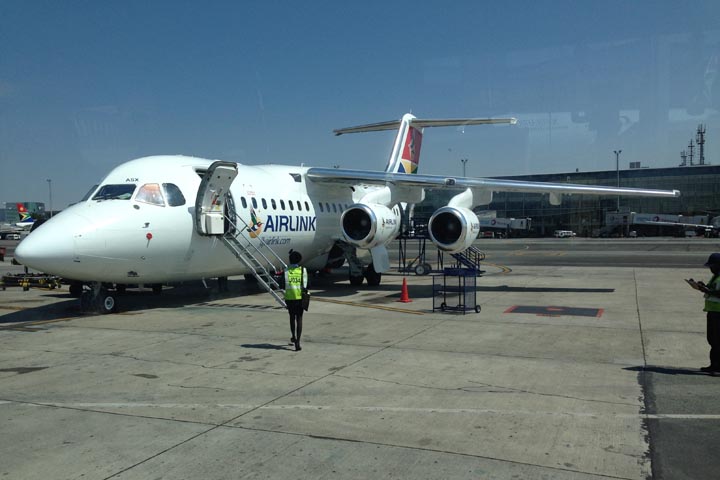 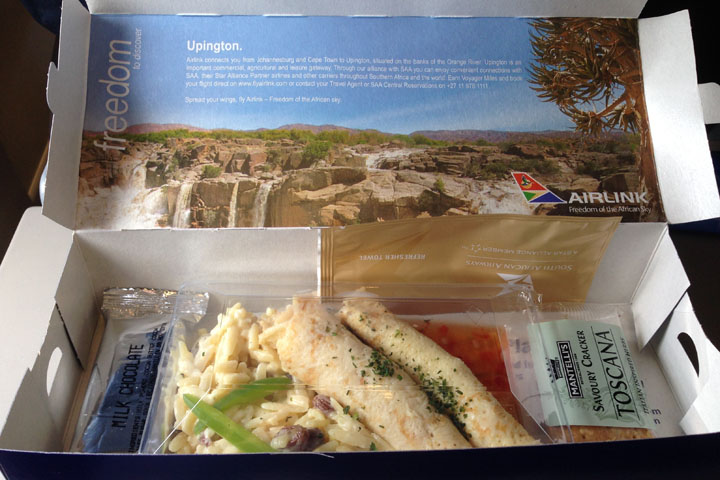 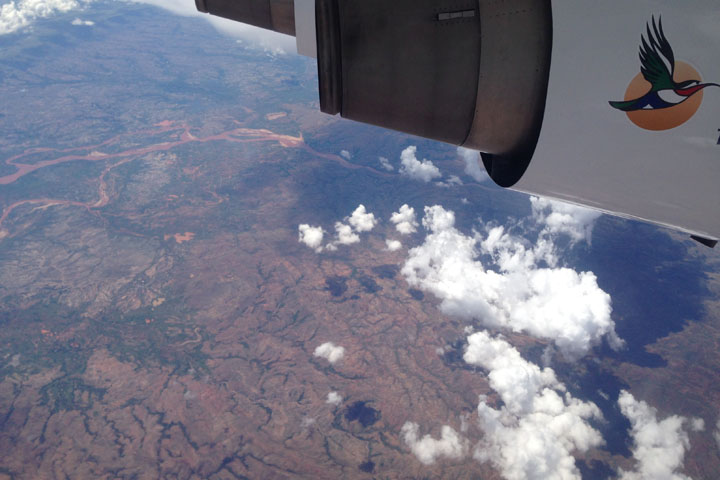 View of Madagascar from Airplane 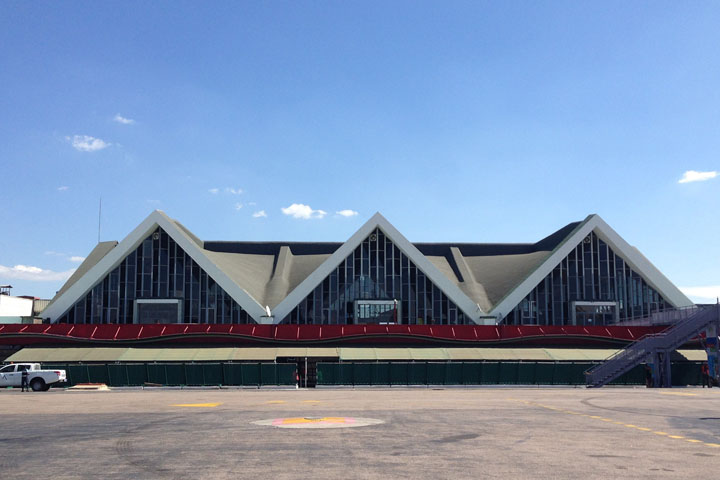 In Johannesburg, we had no time to relax at a lounge because we had only an hour for transfer. Unlike the flight to Victoria Falls (Refer to Moving to Zimbabwe with Lots of Unexpectedness), No issue happened during the transfer this time.

The flight to Antananarivo (Tana) was quite empty, and we were upgraded to row 5 but it was still economy class (only row 1 to 4 were business class, with more leg rooms) and there was no window. Since lots of seats were available, we were able to switch to another row with a window. 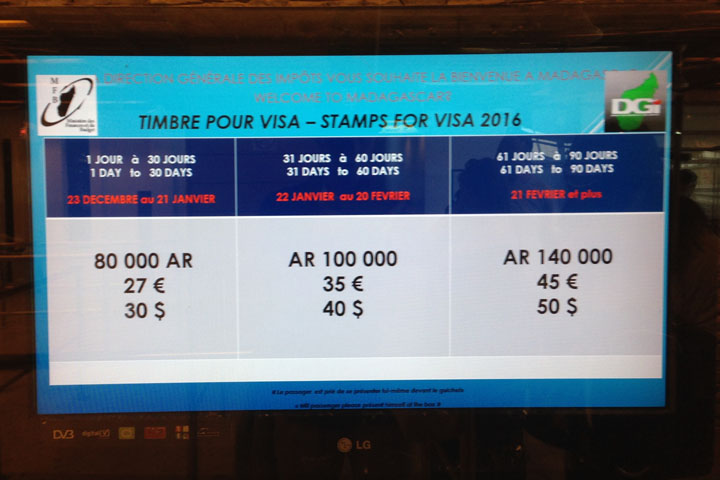 Our flight arrived at Antananarivo airport, which was clean and well maintained, at 2pm. After getting off from the airplane, we followed other passengers and walked directly to the custom without seeing the visa counter. The officer nicely directed us to the visa counter right next to the custom. We provided our passports along with US$30 as visa fee per person. Once the payment was made, the visa on-arrival was issued without any additional document requirements. 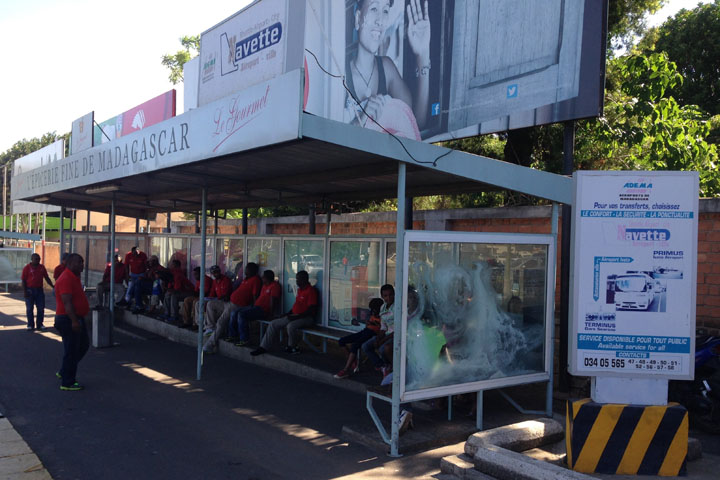 After passing the custom and picking up our large backpacks, we went through the arrival gate. There were an information center, ATMs, a few stores and bathroom within the arrival terminal. Since we arrived in early afternoon and got some extra time, we decided to take a shuttle to the city of Antananarivo. The information center at the arrival terminal and an airport staff led us to the domestic terminal, which was next to (west of) the arrival hall of international terminal, and then told us to wait for the shuttle at the outdoor seating area. According to the information center, the shuttle departed every hour but we waited for more than 2 hours. After the 2-hour wait, the shuttle finally came to the airport but it parked in front of the international arrival gate in stead of the domestic terminal.

After getting into the shuttle (mini bus), we paid cash but did not get the tickets at first. However, we noted a sign in the shuttle that bus tickets should be provided upon payments, so we requested and eventually obtained the tickets from the driver.

It seemed that the shuttle departed when it got full. Since we were the first passengers, we waited another hour in the shuttle until other flights arrived. While waiting for other passengers, we had a chat with the driver since he spoke a little English. The conversation was interesting since he asked if we had any changes, and then told us that he did not have either breakfast or lunch. We were not sure if he was trying to ask for money or food but we gave him an apple left from our breakfast, and he seemed happy with the apple. By 5:30pm, there were more passengers arrived and the shuttle got full for the departure. 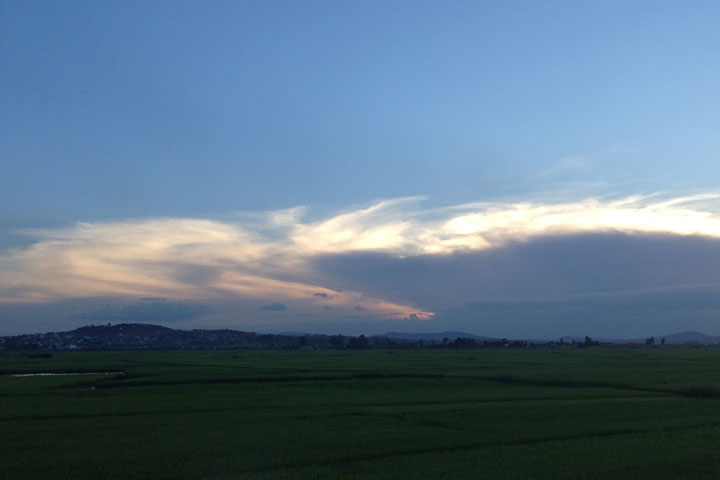 View from Bus at outside of the city

Most of the roads were paved and looked very crowded not only because of the cars but also because of lots of people and chicken walking along or across the roads. When the shuttle slowed down, a few kids walked aside the shuttle and put their little hands on the windows to ask for food and money.

The paved road with asphalt changed to the stone road in the hill, so the ride became very bumpy. Up on the hill, there were many stores, restaurants and residential buildings. The shuttle dropped all passengers at their hotels, and we were the last ones. At a narrow alley, the shuttle stopped and the driver told us to walk down a couple of blocks for Madagascar Underground Hostel, our destination.

The sun was completely gone and the street was dark. But according to google maps, the hostel was a couple of blocks away, just like the driver said. Thus we got off the shuttle and walked for a few minutes to the hostel.

The staff of the hostel helped us check in quickly and led us to a private room. According to the staff, the area around the hostel was relatively safe, and the spot that the shuttle driver dropped us off was not dangerous. Also the driver dropped us off at one end of the narrow lane since it was one-way, and we just had to take a few extra steps.

An adventure in Madagascar has just started!

Breakfast was provided by the hotel (Protea Hotel Windhoek Thuringerhof). Since we had an early flight, the hotel staff packed food for us per our advance request. The packed food include cereal, yogurt, fruits, sandwich and juice. 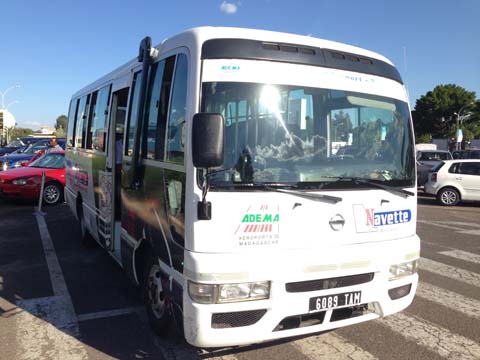 Shuttle bus to the city of Antananarivo 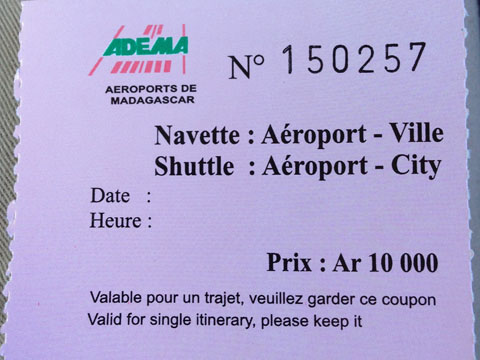 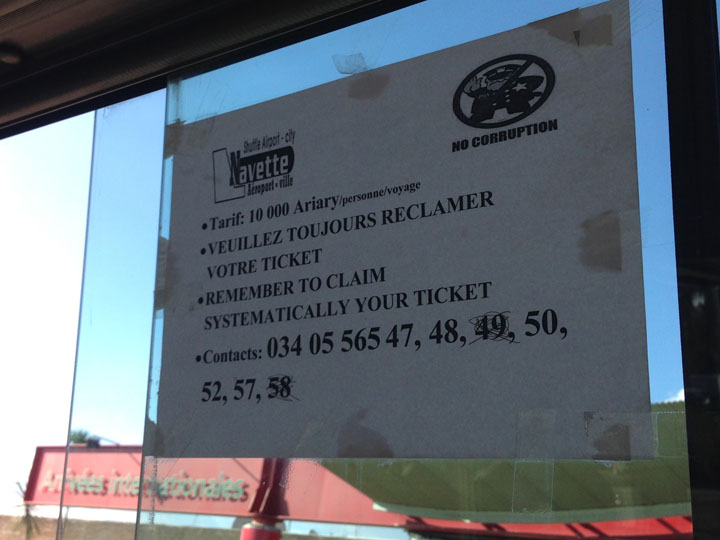 Notice in shuttle bus to claim a ticket 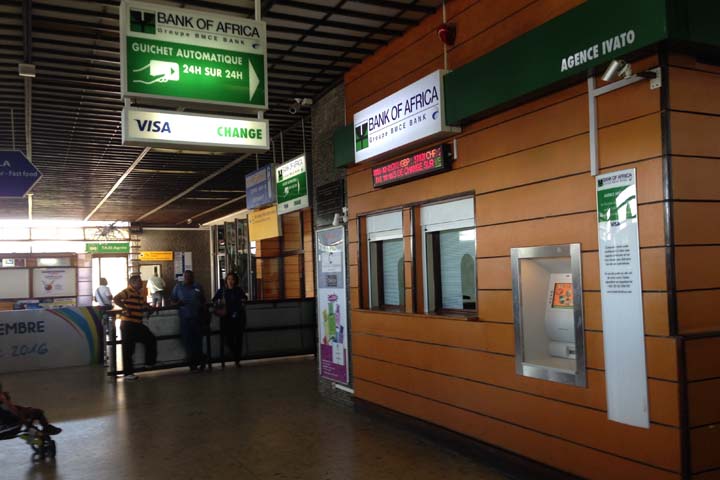 ATM next to International Arrival Gate

An ATM was available in the arrival hall of the international terminal (on your left after you pass through the gate). The minimum withdrawal was 5,000MGA. The exchange rate of the ATM was almost same with the one in Antananarivo city (Airport: 3,330 ariary vs City: 3,334 ariary).

There was also a foreign exchange counter on the same floor, but the rates were not very good. If you prefer exchange counter rather than ATM, we recommend to have a $100 bill, which would have a better rate than the smaller bills. In general, a larger bill had a better exchange rate in Madagascar.

A restaurant was located on the second floor of the international terminal. Refer to post Moving from Antananarivo, Madagascar to Dar es Salaam, Tanzania for further information.

We could not find any information about how to get to Loango National Park until we met Remy, our tour guide at Lope. Be...
2016.12.07