The oldest desert in the world, Namib Desert, was one of the most famous sightseeing attractions. As much as how well-known the desert was, the experience was very unique and amazing, absolutely nothing else comparable for us. Dune 45 and Dead Vlei were the main spots in the oldest desert where travelers can explore the beauty and toughness of the nature.

We arrived at the Sesriem entrance around 6pm and checked in at the reception for the National Park and campsite. The receptionist gave us a map of the Park and informed us that the sunset time was within two hour. Dune 45 is 45-min drive away and we still needed to climb up the dune, so we decided to drive directly to Dune 45 for sunset without setting up our tent. 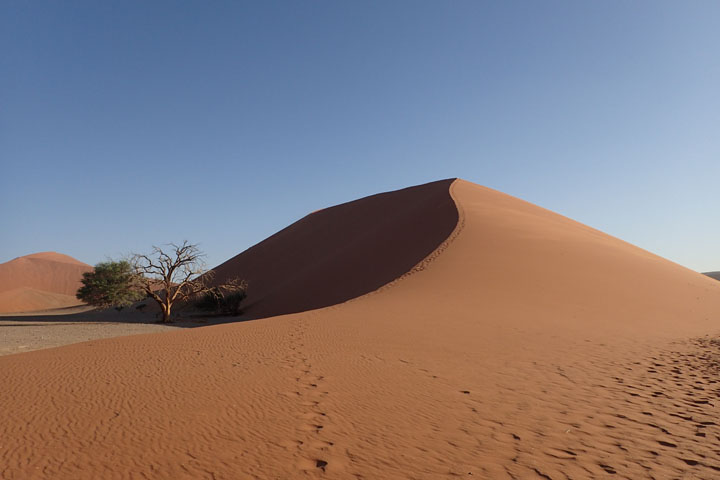 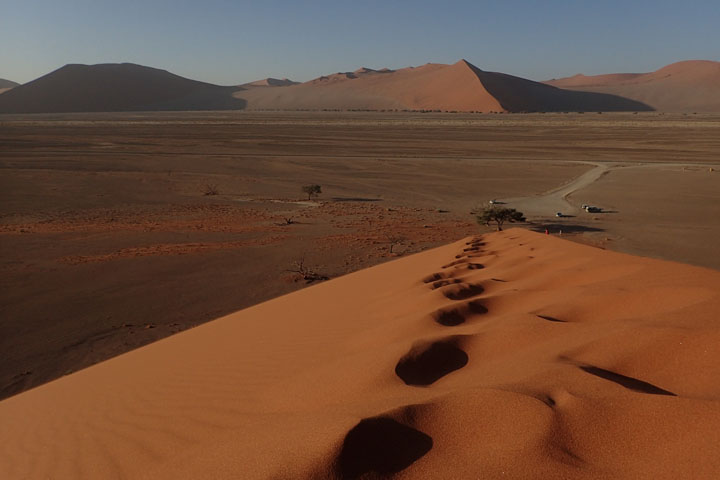 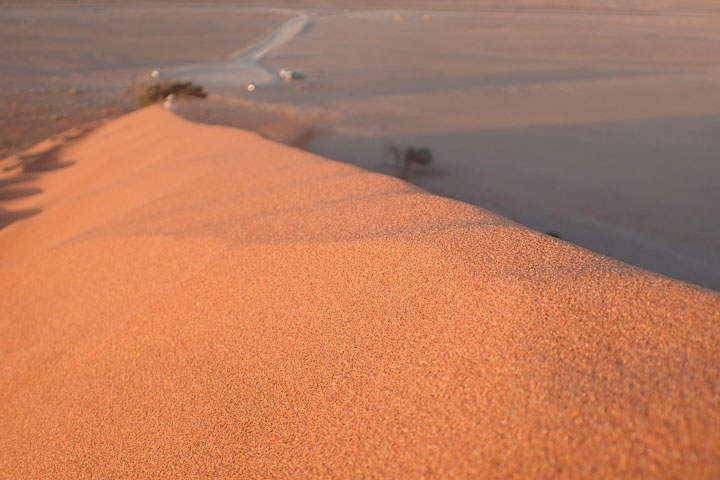 We arrived at Dune 45 in 45 minutes and parked in the parking lot. It was already evening time but the temperature remained more than 30℃. We still had some time before the sunset at 7:45pm for the day, and we climbed up and walked on the Dune to find a good spot for sunset.

It was not easy to climb up the sandy slope, but even on the way up the view was incredible, which we had never seen in our lives. We climbed up to about 2/3 height of the Dune and sat down to set up the cameras and enjoy the view. It was extremely quiet, without any sound other than the wind making the sands flying around. As the sky got darker, the sands reflected the sunlight and turned into red or even gold some times. The sands were warm and spread the heat to our hands as we touched them. The tender wind created countless golden and gorgeous waves on the desert. Throughout the sunset, the surface of the desert kept changing, showing beautiful gradation of warm orange, high red, to gorgeous gold. 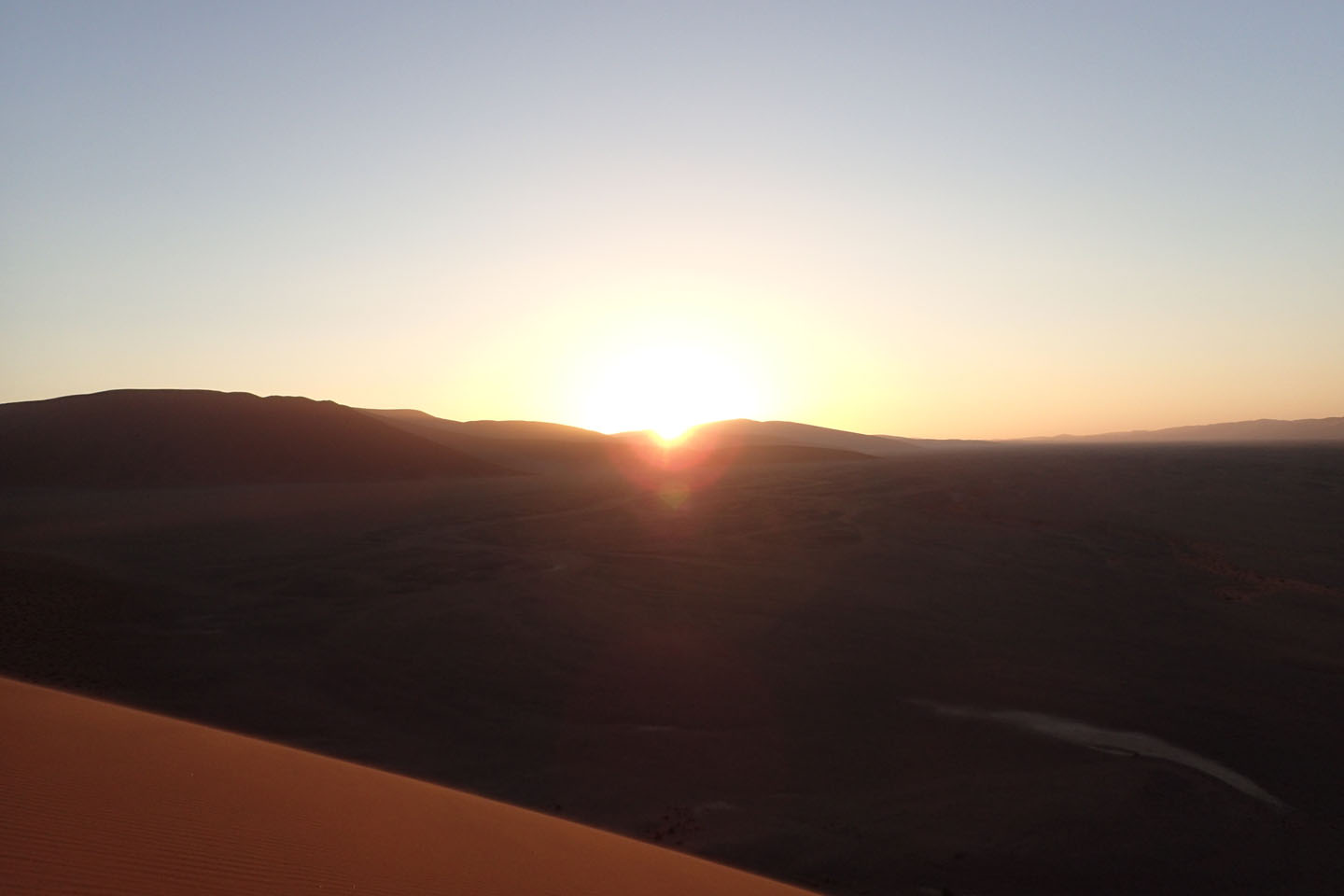 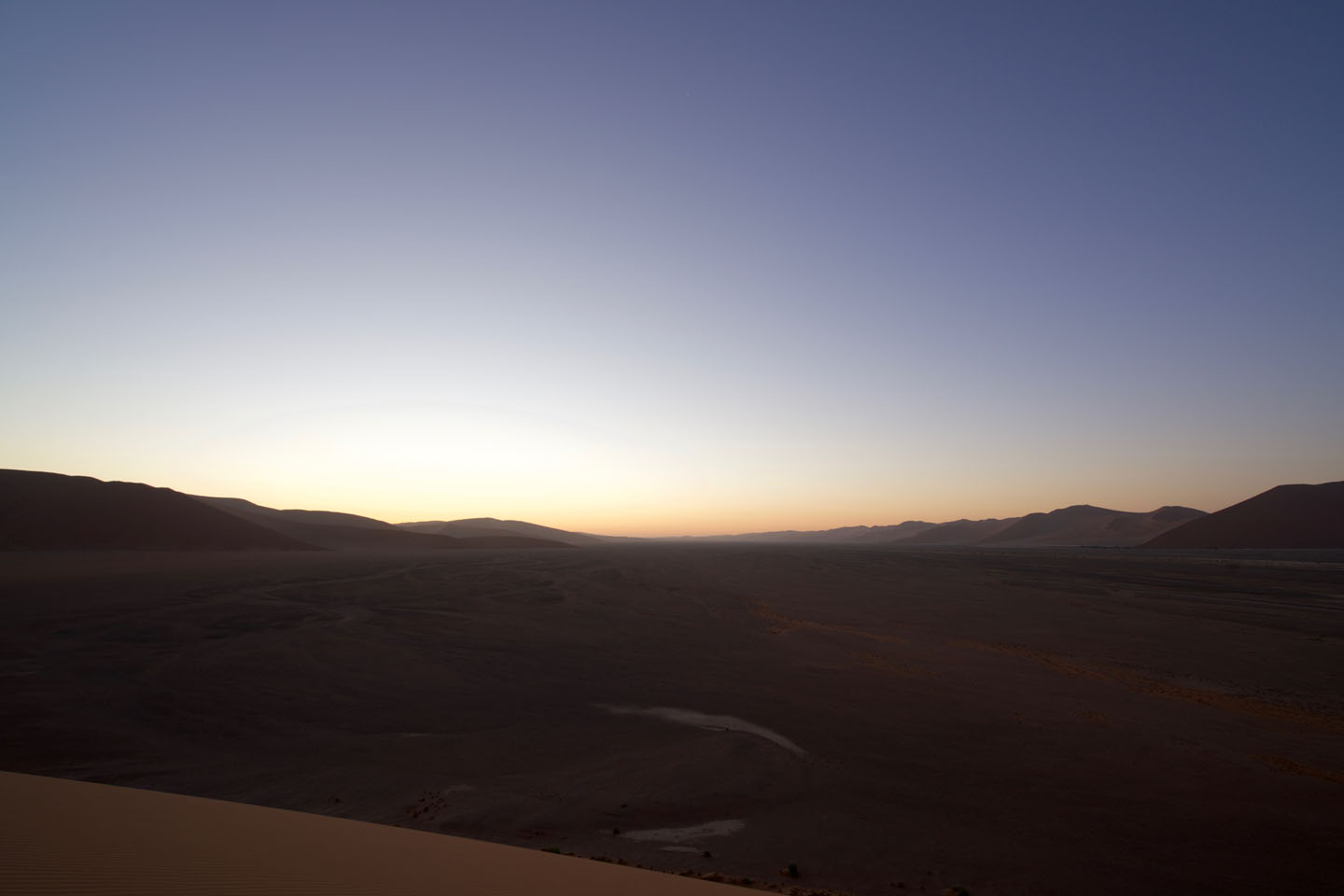 There were two other groups came later on but we all gave some distances to each other so we could all enjoy the nature without any distraction. One group of the travelers also ran on the Dune all the way to the top.

After the one-of-a-kind experience given by the nature, we drove back to the reception area. Even on the way back, the view was very unique and beautiful. When we arrived at the gate, the sky was completely dark already. We got some hot water from a bar in the restaurant next to the reception to cook pasta for dinner.

Camping in the desert was an unique and interesting experience. The sky was full of stars and we put our heads out from our tent to enjoy the view as a perfect ending for the day in the oldest desert in the world.

The following day, we woke up at 4:30am to see sunrise at Dead Vlei. When we drove to the gate to wait for the gate opening at 5:10am, there were cars lining up in the dark already. Driving on the same paved road for Dune 45 yesterday, we got to the end of the paved road by 6am. Since our car was a normal sedan (non 4×4) car which could not proceed on the sands, we parked our car at the parking and paid for a ride of a 4×4 shuttle to go to Dead Vlei. The ride was only 10 minutes, but cautions were definitely needed when driving on the sands. On the way we actually saw one 4×4 truck stuck into sands and couldn’t move at all. More than likely those people in the truck missed the sunrise because of this accident. It is highly recommended to take the shuttle if you are not confident driving on the sands.

As the sun came out, the sunlight gradually covered the area. The picturesque view appeared when the sunlight lighted up only the surrounding dunes but not yet the ground of Dead Vlei, which only lasted for a few minutes. The area lighted by the sun rapidly expanded and we actually saw the shadows moving and spreading. The motion of the changing view was definitely amazing and spectacular. We believe that no one would regret all their efforts made to reach to the middle of a desert for this special moment. 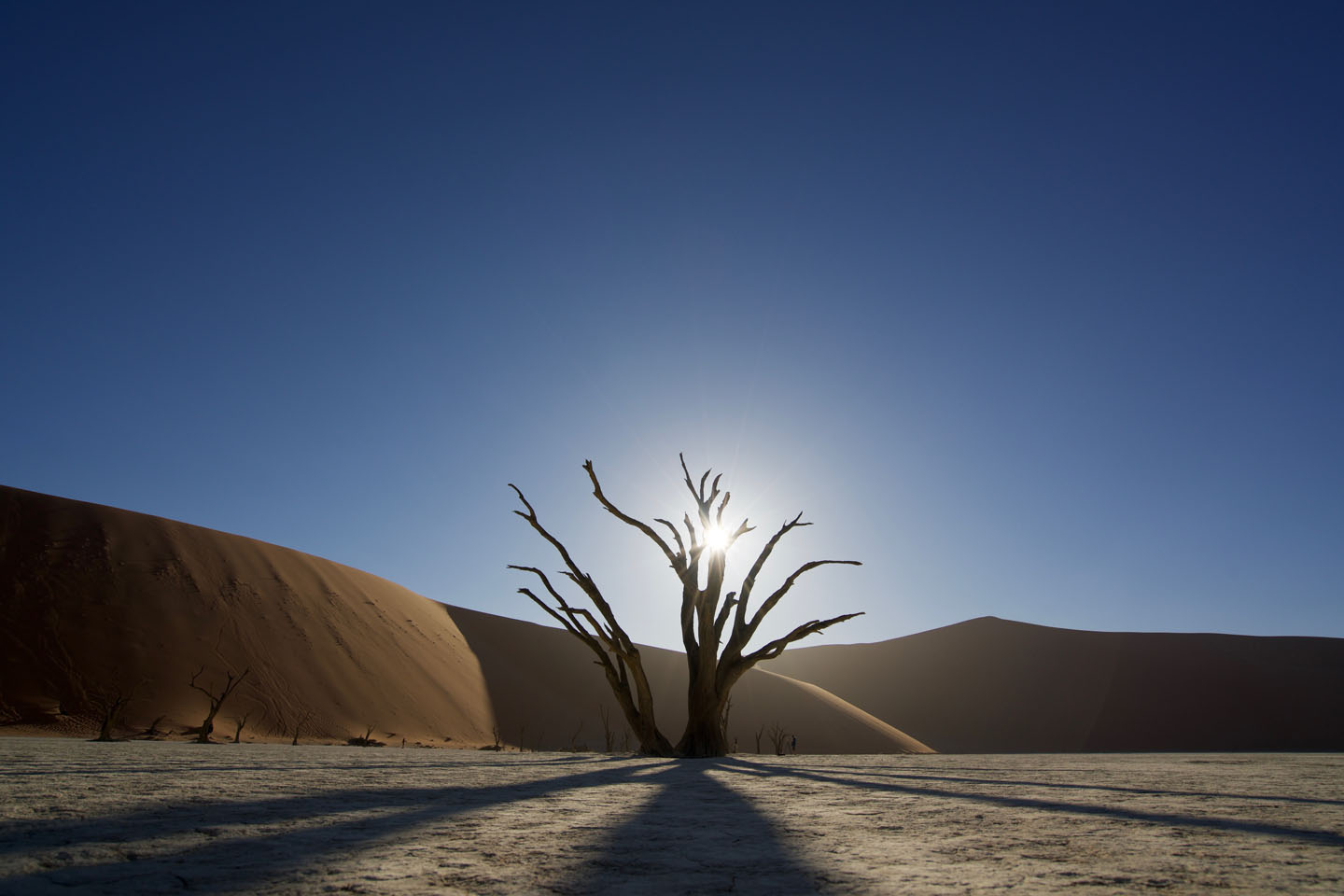 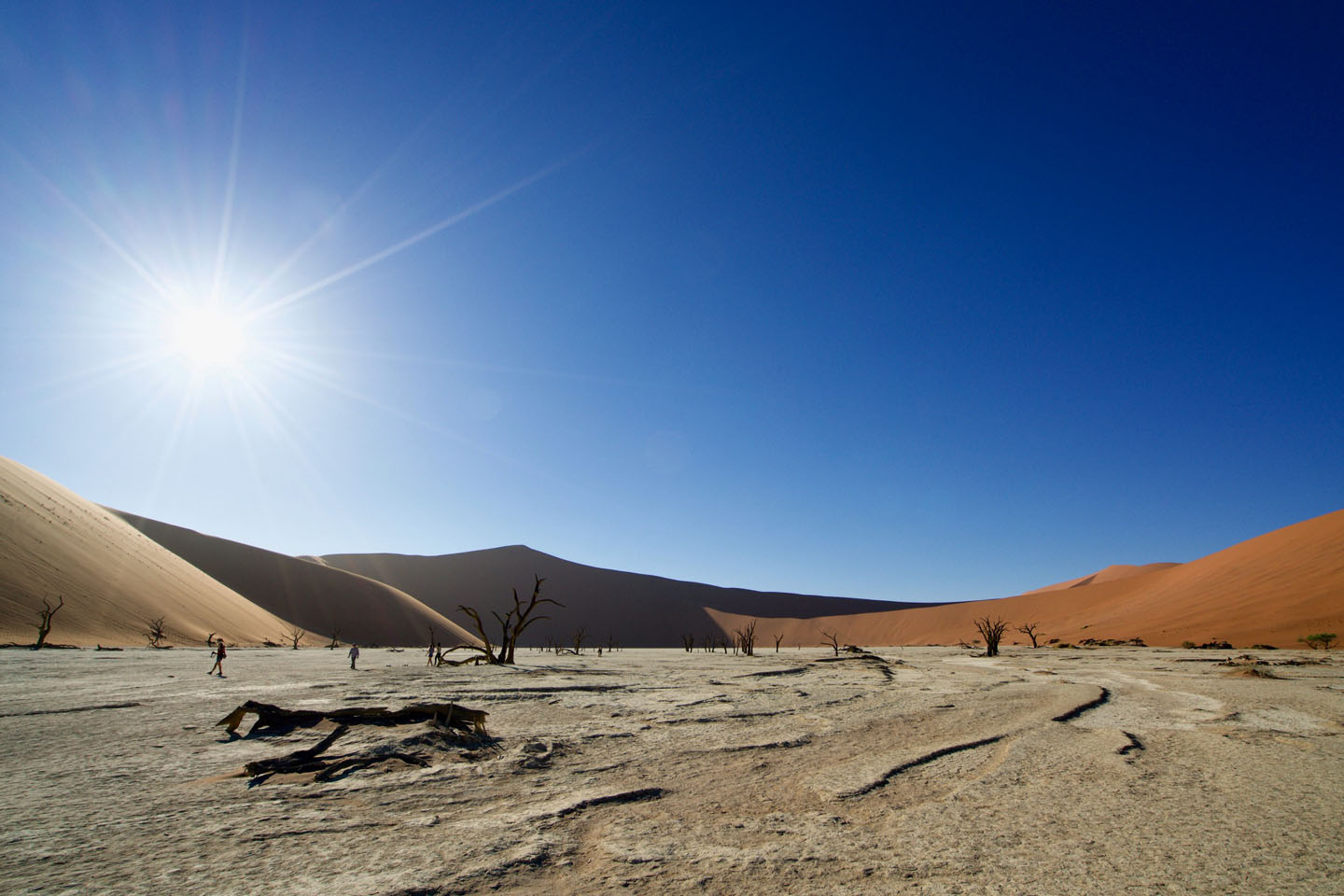 Dead Vlei after sunrise
Dead Vlei under the sun

Until the sunlight covered the entire area of Dead Vlei, we enjoyed feeling the desert. Right before we left from Dead Vlei, we realized that the ground of Dead Vlei was dried hard clay even though it looked like hard rocks. Thus the clay ground was relatively soft and vulnerable. We hope that Dead Vlei continued being a great natural scene going forward, just like what it had been for the last 700 years. 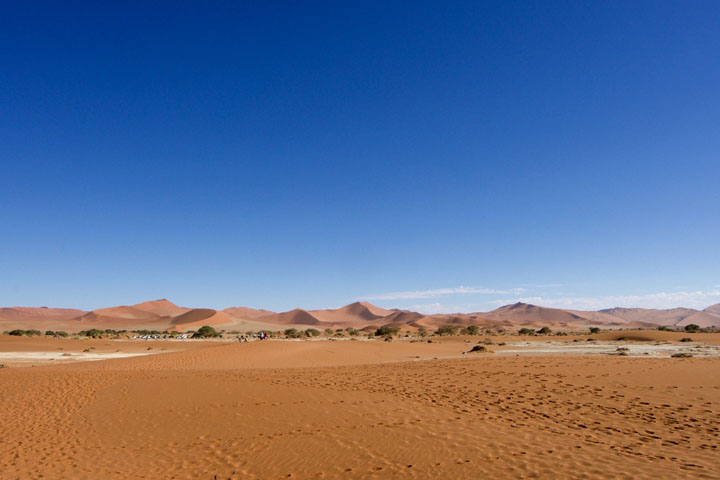 Walking back to shuttle drop-off point 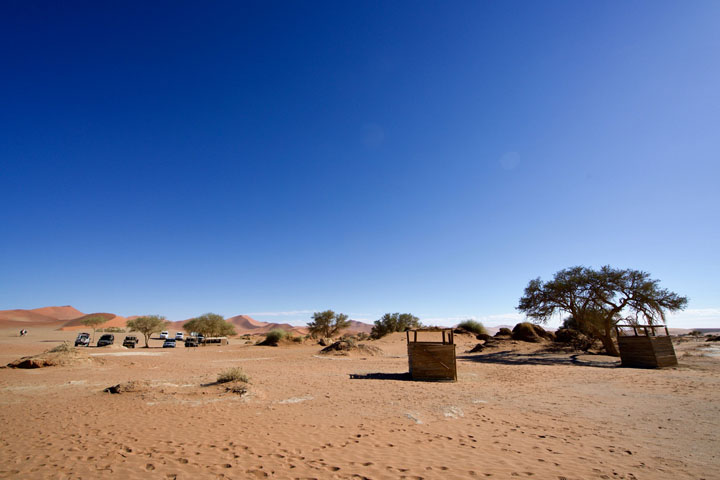 Parking and toilets at Dead Vlei

We stayed at Dead Vlei until almost 9:30am and headed back to the drop-off point of the shuttle. We waited the shuttle for about 30 minutes and then we drove back to the campsite around 11am.

Dead Vlei is surely one of the greatest attractions during our 4-month trip in Africa, South America, and Antarctica, and we would love to go back there again. It may not be easy to reach but all the efforts will be definitely paid off.

Gate Time: Entrance for the visitors is between sunrise and sunset only. On the day we visited the gate closed at 8:30pm, and the gate opened at 5:10am next morning. We recommend checking the gate time with the receptionist to help plan your trip. Also free park map was available at the reception.

Travelers need to pass through two gates to get into the Park. The first one is to Sesriem campsite, which was located right outside of the Park, and the second gate is from the campsite to the Park. The first gate opens at sunrise while the second gate opens one hour before sunrise. It is highly recommended to stay at Sesriem campsite for sunrise if your schedule and budget allow.

Campsite in the Park 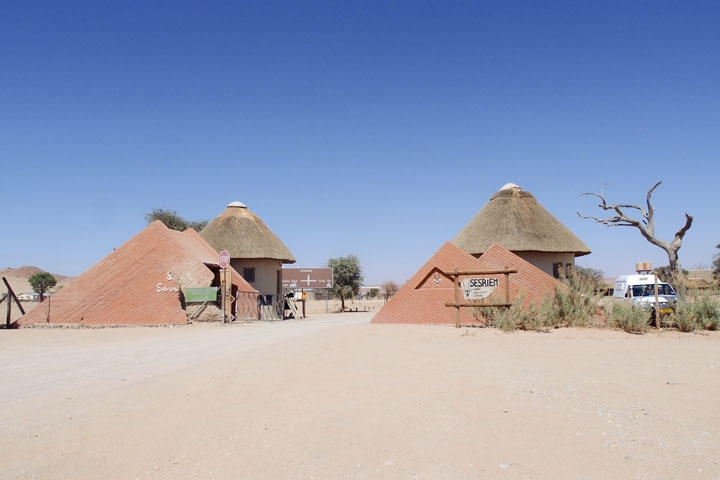 Meal: Not included. A restaurant (bar) was located next to the reception.

The campsite was pretty clean. Our assigned spot was on the edge of the whole campsite, and thus it was relatively close to the main entrance and reception. The following is the list of facilities at the campsite:

There were no lights in the whole campsite other than at certain facilities such as reception, restaurant, toilet, and shower rooms. Because of the limited lights, a head light would be very useful.

Both the toilets and shower rooms were fairly clean for a campsite. Since the campsite is located in the middle of a desert, we rarely saw bugs around the lights.

A convenience store was located next to a Eugen gas station which was right across the National Park entrance. The store sold packaged food, dried noodles, drinks and some pastries.

To visit Dune 45, a paved road was available from the reception area, so driving a non 4×4 car would not be a problem. However the last 5km on the same route to Dead Vlei was not paved and completely covered by sands. A 4×4 car is required to drive on the sandy road. All the non 4×4 cars are required to be parked at the end of the paved road and the travelers need to take a shuttle from the parking.

We saw one 4×4 truck stuck in sands during our shuttle ride to Dead Vlei. If you are not confident driving on the sands, it is highly recommended to take the shuttle.

After visiting the greatest water falls in African continent, we moved to the next country for a safari which was known ...
2016.12.13