Moving from Antananrivo to Morondava

On December 25, we packed our luggage and checked out from Madagascar Underground Hostel at 11am. Due to the holiday, lots of stores were closed and the streets were very empty. We bought some food and water from a Shell gas station (about 5-minute walk from the hostel) and took a cab to the taxi brousse terminal.

Comparing to the busy terminal the day before, the taxi brousse terminal today was much peaceful. We still asked each company one by one, but they either said no bus to Morondava or told us to go to SONATRA, one of the bus companies. Initially the staff at SONATRA told us the tickets for today were sold out but later on they came to us and said there were two seats available in the last row.

Before people got into the taxi brousse, the bus staff loaded luggage for all the passengers, including bags, tires, and even a scooter. We sat in the last row and luckily there were only 4 people in our row, not like other rows where 5 people sat for four seats. 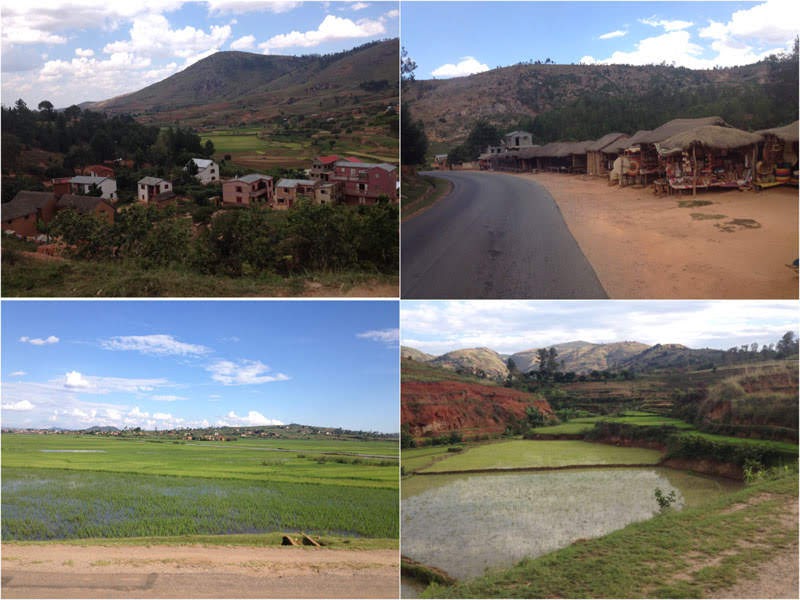 At 12:50pm, the car departed from the terminal and drove out of the city. The view changed so quickly, and a few houses resided within the wild green fields or on the hills, quiet and peaceful, made it much more attractive than downtown Tana. On the way we also passed by a good amount of villages. Most houses were built with straw and mud while a few were built with concrete.

Around 8pm, we arrived at a village for a dinner break and it was all dark. The only lights were from a hostel and a few stores, and there was no street lights.

We went to one of the street vendors with other passengers for dinner. One of the passengers started chatting with us and even tried to pay for our food. We appreciated it but just refused it politely. Later on while we were walking in the village, the same person also came to tell us we should not go too far from our car for our own safety. Due to very limited electricity, the village was very dark. Some local people gathered in front of some small shops drinking and chatting to enjoy their fun time.

Before 9pm, the taxi brousse got back on the road to Morondova. It became much more comfortable than daytime because cool wind started coming in from the car windows.

Around 2am on December 26, we finally arrived at Morondava. Most people got off and picked up luggage. Then they either took a cab or were picked up by someone. Since few people who didn’t get off just started laying down in the car to sleep, we also lay down on the seats and slept in the car until the outside became bright. During the night, the weather was cool and comfy but mosquitoes were there to disturb our sleep.

Following the GPS on our phone, we walked to The Trecicogne Hostel in about 25 minutes. On the way, we passed by the market right next to the terminal where lots of stores and vendors gathered, a few restaurants and small convenience stores. 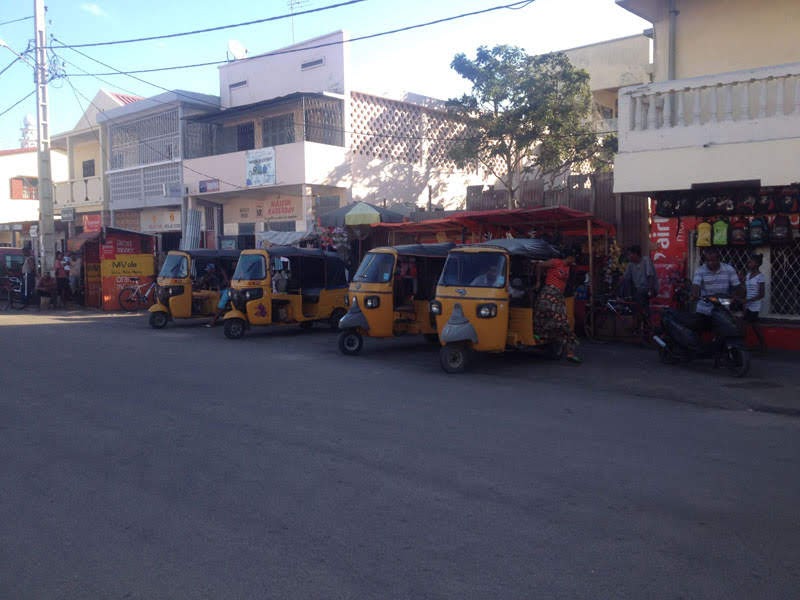 Around 6am we arrived at the hostel. The owner was very nice showing us a few rooms available. Even though we arrived early morning without reservation, a staff cleaned a room quickly so we could check in by 8am.

After taking shower, we headed out for breakfast at 10am. We just walked around and stopped by a beach to see the views. Then we went to a restaurant attached to a lodge.

Yves, who later became our tour guide, approached us while we were having breakfast and shared some tour information about Baobab Avenue and Kirindy Forest Reserve. Because Morondava is a small town and it does not have many tourists, it seemed like information of any tourists coming into the town spread quickly and tour guides easily locate the tourists to contact for a tour.

After breakfast we headed back to our hostel to take a break and then headed out to the taxi brousse terminal around 2:30pm to buy the bus tickets going back to Tana.

Most of the stores were already open as we got back to the terminal. In the afternoon, the sun got pretty strong and temperature went very high, so we stopped by a half outdoor place for food and drinks around 4pm.

On the way back to our hostel, it felt like more than 40 Celsius degree. By the time we reached to our hostel, we felt so hot and had heatstroke. We kept drank water and sports drink while taking shower multiple times because the room had only a fan not AC. After we felt better for heatstroke, we rested in the room for the rest of the day to be ready for a tour to the avenue of Baobab and Kirindy Forest Reserve. 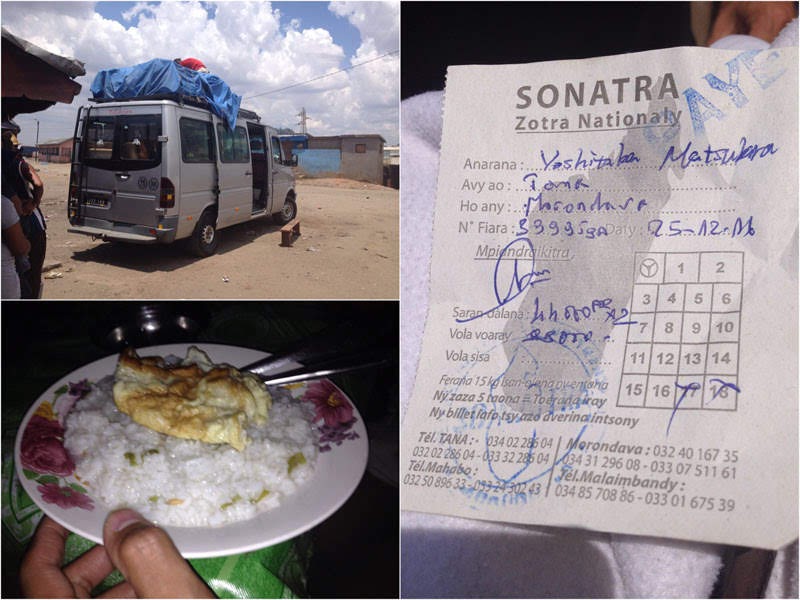 The car was a small minivan that has 18 seats including a driver seat. However one extra person was squeezed into each row so the number of passengers was usually more than the number of seats.

Even when the number of passengers was equal to the seats, the space of each seat was very limited and there was no space for legroom. You definitely need to shrink your body and legs in the car unless you get a seat in the first row behind driver’s seat.

The seats were assigned upon purchase and marked on the bus tickets. For people who gets carsick easily, we suggest booking the seats closer to the driver seat.

Inside the car it was pretty stuffy and hot because A/C was not on. But sitting next to a window made us feel much better, especially after we drove out from a city of Tana.

Based on the passengers’ request, the driver stopped in the middle of nowhere for a restroom break. No toilet or wall but under a clear blue sky. Essentially each person finds a place with some distances from others.

During the ride, we stopped at a small village for dinner and we ordered congee with salty egg for 1,200 MGA.

For further information about the taxi brouss terminal, please refer to Antananarivo, Madagascar I. 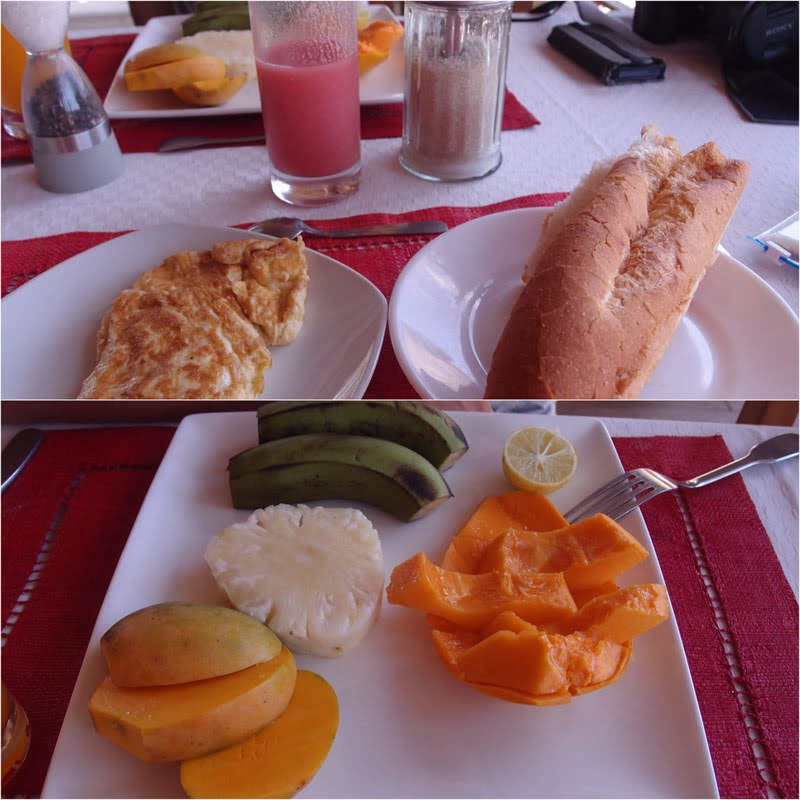 After we arrived at Morondova, we had Breakfast at a restaurant attached to a hostel. A fruit plate, bread and one egg along with two cups of juice cost 16,000 MGA. 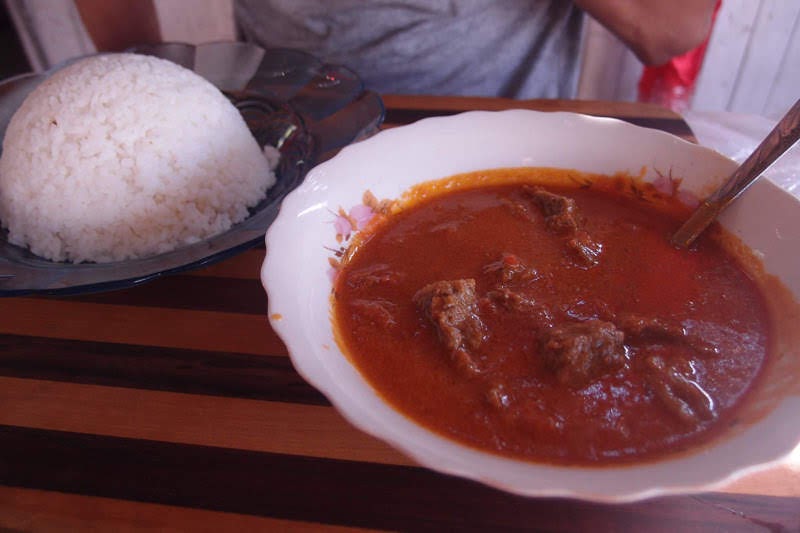 We couldn’t read the menu so we used English plus body language and the owners were quite patient explaining the menu to us. The beef stew with rice (zebu au coco) was very delicious and the baobab juice (made from baobab fruits) was unique and tasty. We spent 13,900 MGA for one dish and one soda. 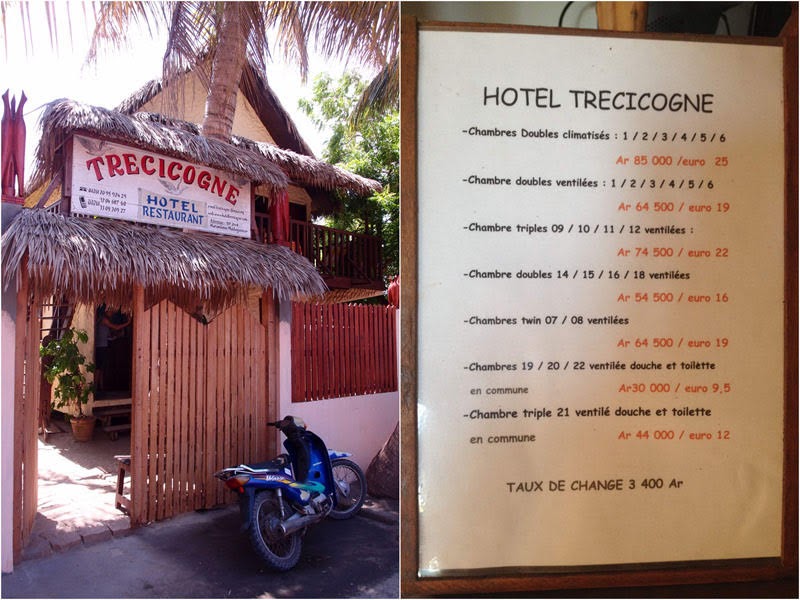 It had rooms with or without A/C and the prices were different. There were also rooms with private bathrooms and rooms with shared bathrooms.

We stayed in a room without A/C on the second floor. The bathroom and showroom were shared by three rooms. The room was 30,000 MGA but after we negotiated with the owner we got 26,000 MGA per night for two persons. All rooms we saw were fairly clean. 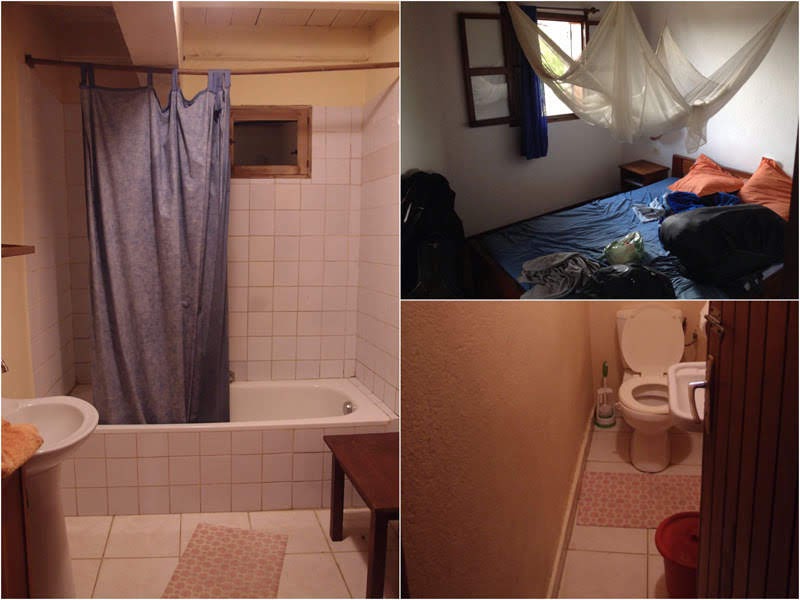 Our room had a double bed, a big closet with two towels, and two small tables. The room was very hot without AC, and there were lots of mosquitoes even during night time.

Taxi Brousse Terminal in Morondava In the morning, we took a quick shower, packed our luggage and took a pedicab to the...
2016.12.28